A public transport commuter in Singapore appeared in a TikTok video to have been very agitated, as she could apparently be heard shouting at a fellow commuter and asking why her baby was not wearing a mask.

The bizarre 29-second clip, which was taken discreetly by another commuter sharing the same cabin when the incident occurred, was uploaded online on Dec.2 and has received more than 18,000 reactions on TikTok.

The video started by showing an ongoing commotion in the cabin and only the back view of a woman in blue who was apparently shouting at that time.

The woman appeared to have been addressing another commuter seated in front of her, but who could not be seen in the video.

The caption of the video read: "'how come your baby never wear a mask' she just asked her to wear a mask on the train bruh"

What was said during the exchange

The exchange between the woman and the other commuter is as follows:

Shouty voice: Who the hell are you to shout at me?

Shouty voice: Come so near me for what? Ah, you see, you are a big problem. You talk too much [unintelligible word] until become like that...

You this kind of person bring curses, you know?

What if that lady accident, huh? What happen?

What was allegedly not caught on camera

A comment left on the TikTok video by the uploader claimed that another woman intervened and tried to defend the other commuter who was shouted at.

But the woman who was shouting allegedly kept pushing the other woman and shouted to stay 1m away.

The immediate reactions to the woman shouting on the train could be gleaned from the faces of the two passengers seated and facing the camera.

They appeared dumbstruck and in disbelief. 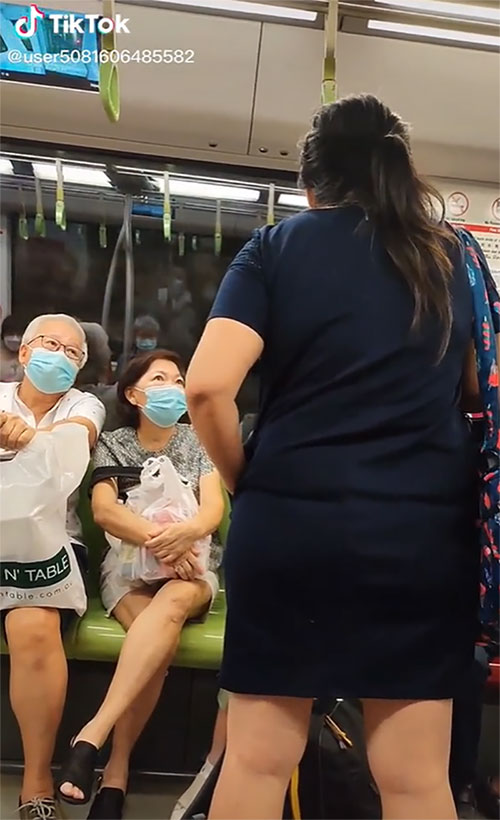 Some comments on the TikTok video expressed befuddlement as to what could have triggered the woman for her to end up shouting on the train.

Most comments were unsympathetic and condemned the woman's actions as over the top and unnecessary and labelled her a "Karen", while suggesting she might be mentally ill.

What MOH says about mask-wearing for children

According to the Ministry of Health in Singapore, only children six years old and above must wear a mask when leaving their homes.

If there is difficulty wearing and keeping face masks on for a prolonged period of time, children 12 years and below may use face shields in place of masks.

Mask-wearing is not recommended for children below the age of two years for child safety reasons.