After 707 days of being away from home, I'm finally back in my hometown -- Melaka -- thanks to the Vaccinated Travel Lane (VTL).

I'm glad I took the opportunity to return and reconnect with family and friends, while also getting to enjoy the good food that I've missed dearly.

However, as Melaka is considered a popular tourist destination, I couldn't help but wonder what it was like for those who worked in the tourism sector, and had to weather the lack of foreign tourists due to border restrictions.

I decided to go visit the tourist spots, to get a sense of how much has actually changed.

Arriving at Jonker Walk on a Friday afternoon (Dec. 10), I was greeted by a rather quiet street.

Perhaps the cloudy and gloomy weather had an effect too, but it felt much quieter and less busy than usual.

As the streets of Jonker Walk also connect to other parts of town, I remember it as a busy and bustling street, with a constant flow of cars.

However, this particular Friday was quite different, as the streets were almost empty.

The deputy chairman of Jonker Walk's management committee -- Gan Tian Loo -- previously said on Aug. 7 that around 95 per cent of shops in the area halted operations for months.

There were even rumours that Jonker Walk would close permanently, which Gan had denied.

Just as I entered Jonker Walk, I immediately caught sight of shops that were not open for business. 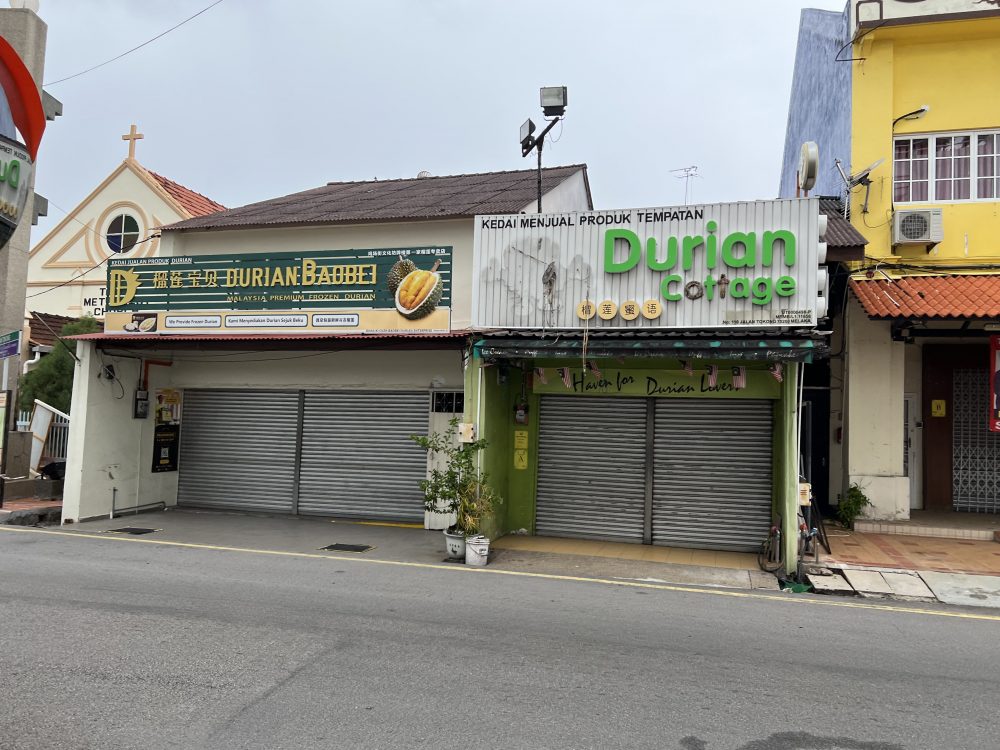 There were at least half a dozen empty shop lots, a situation unheard of before the pandemic. 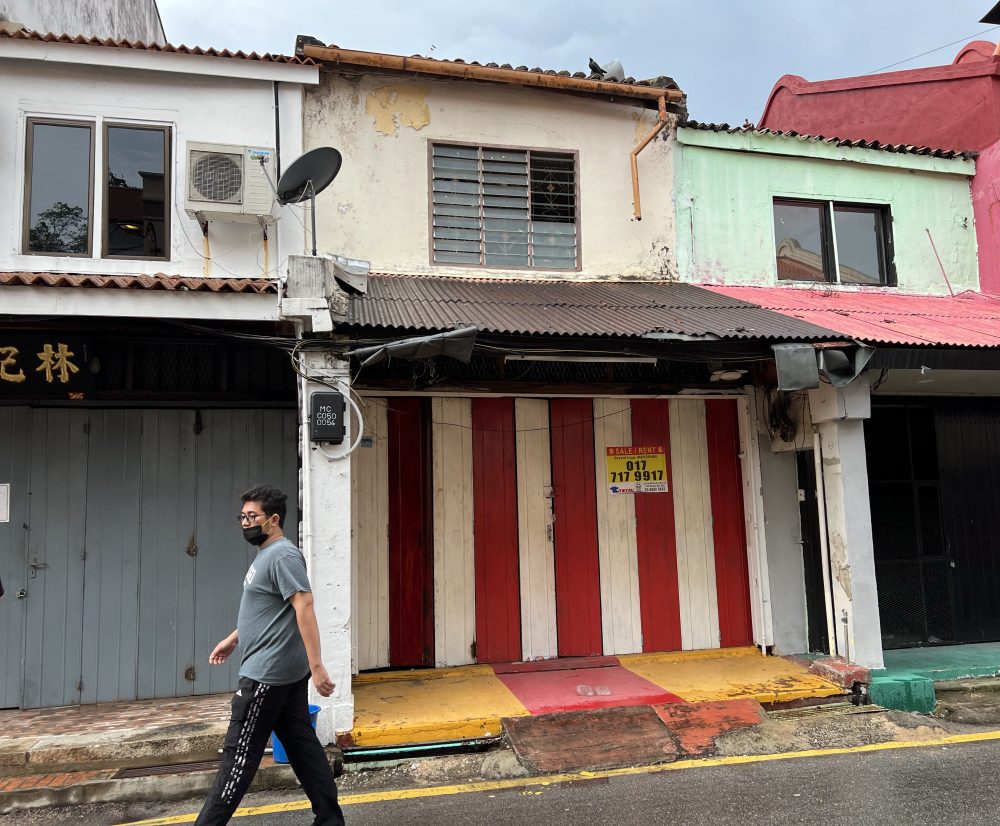 A well-known chicken rice restaurant that had been operating for more than 50 years -- Hoe Kee Chicken Rice -- halted operations since September 2020, and is expected to close for good, according to China Press.

The owner was also worried that the resumption of interstate travel in Malaysia would accelerate the spread of the Covid-19 virus, and planned to change his line of work.

Although he admitted that it would be a pity to close the restaurant after running it for more than half a century, he said his brother's restaurant at Melaka's city centre would carry the legacy forward.

Queue at a popular cafe

On the other hand, business appeared to be going well for a popular cafe along Jonker Walk -- "The Daily Fix".

I was surprised that the cafe was full even on a Friday afternoon, and there were at least two groups of people waiting to get a seat.

After strolling around for a bit, I made my way to one of the tourist attractions in the area -- the Cheng Hoon Teng Temple.

According to the temple's website, it was founded in the 1600s and is the "oldest traditional Chinese temple" in the country.

I caught wind of the revised opening hours from one of the shop owners on Jonker Walk, and was relieved to make it there before it closed for the day.

Prior to the pandemic, the temple opened from 7am to 7pm daily, but the opening hours have since been cut short and it now closes at 5pm.

Upon entering the temple, I realised that there were far fewer people there as compared to pre-pandemic times.

There were no tourists armed with cameras, and I was pleasantly surprised that I did not have to queue or squeeze around to pay my respects.

Few groups of tourists scattered around the Stadthuys

Thereafter, I decided to head to the Stadthuys to see if it was as crowded as before.

The Stadthuys is a historical building built by the Dutch colonisers in 1650, and served as a town hall and the governor's residence.

It is now home to the History and Ethnography Museum, and used to be one of the most crowded and popular tourist spots in Melaka.

In contrast to the pre-pandemic crowds, there were only a few groups of people scattered around the historical site.

Located right beside the Stadthuys, the 268-year-old Christ Church appeared rather deserted too.

Also left behind by the Dutch, it is said to be the oldest functioning Protestant church in Malaysia.

About a 10-minute walk away, the remnants of the old Portuguese-built fortress -- A Famosa -- stands till this day.

Built in 1511, the fortress is said to have housed the entire Portuguese administration, though much of the original building was destroyed after they were defeated by the Dutch.

Most of the remaining structure is believed to be built by the Dutch in 1670.

Similar to previous attractions, there were also only small groups of people taking photos at the historical site.

Next, I walked up a flight of stairs to check out St. Paul's Church, another historical site near the A Famosa.

The place was almost deserted except for a few tourists and myself, and the church was cordoned off as there was some construction work going on. 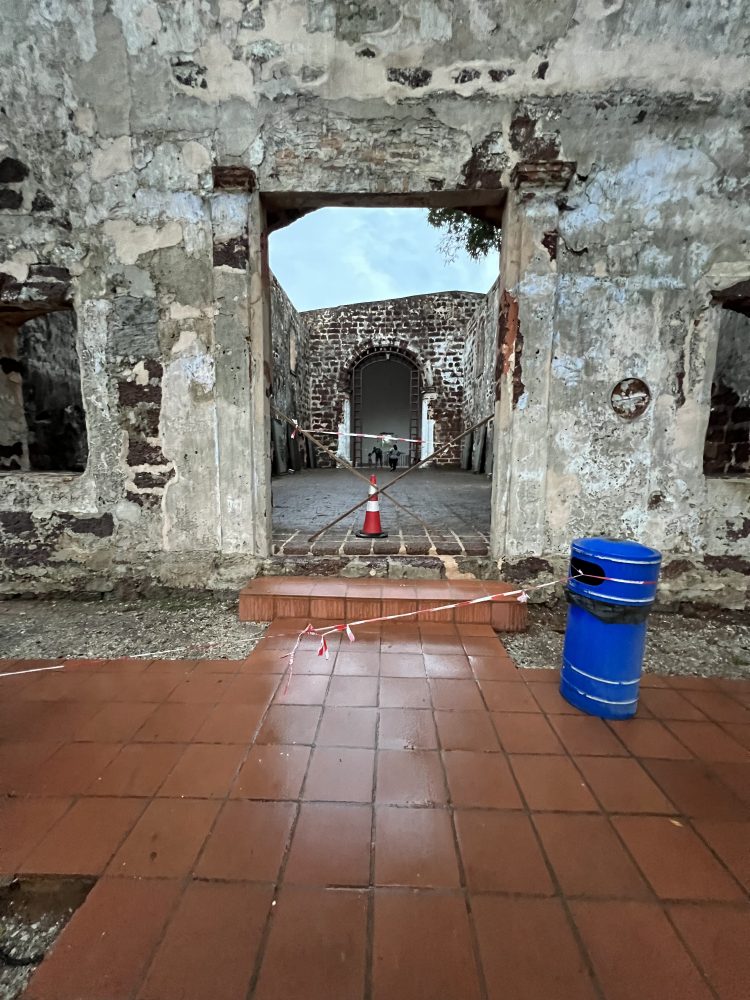 To wrap up my walking trip around the attractions of Melaka, I decided to head to the Jonker Walk night market to see if the crowds have returned after the interstate travel ban was lifted.

Just as I thought I would be greeted with a quiet street again, I saw a small crowd forming in front of one of the entrances.

The people were apparently queuing to check into the place with the MySejahtera contact tracing app (similar to Singapore's TraceTogether).

Although it wasn't as crowded as I remembered -- I didn't have to keep bumping into someone else -- there was a constant stream of people walking through the market.

The crowd thinned towards the middle part of the night market, and there were at least two dozen vacant lots that were not occupied -- a situation unheard of before the pandemic.

Prior to the pandemic, crowds would also congregate around the stage area, as there'd usually be performances or just old folks singing karaoke.

However, it now felt rather empty, as performances were not allowed to continue due to concerns of Covid-19.

Business is bad compared to before

Speaking to several shop keepers and stall owners, I understood that their sales fell by at least 50 per cent compared to pre-pandemic levels.

Many of them said it was a "difficult" time, as their income previously depended heavily on foreign tourists.

The business owners also told me that there was a "huge crowd" on the week of Deepavali (Nov. 4), which they attributed to the reopening of state borders and the resumption of the Jonker Walk night market.

However, business appeared to have slowed down afterwards.

In contrast with the businesses that succumbed to the impact of the pandemic, I came across some new shops as well.

One was a restaurant located by the river, towards the end of Jonker Walk, while another one was a souvenir shop next to the stage.

While I didn't get the opportunity to speak to the folks who ran the restaurant, I was fairly surprised to find a friend of mine running the souvenir shop.

He started his new business in mid-November, and is quite optimistic that tourists will return to Jonker Walk when Malaysia opens up its borders to more countries (assuming the Omicron variant doesn't disrupt things too badly).

He opined that things will eventually get better, especially when tour groups from China and Indonesia can travel to Melaka again in the near future.