In the latest development, Mandopop singer Wang Leehom's ex-wife Lee Jinglei has accused Wang's dad of "telling lies" since the news about the couple's divorce was made public.

The elder Wang had posted a handwritten letter late last night, saying that he can guarantee that Wang did not have any affairs. In the letter, he also made several allegations against Lee and urged the public to take a more objective view of Wang.

In another lengthy note of over 3,000 words shared on her social media, Lee responded that it's "unbelievable" and "heartbreaking" that the elder Wang has to lie for his 45-year-old son.

Lee started her note by asking Wang to take responsibility instead of "hiding behind his parents" in this saga:

"We are all adults, we should face it ourselves when something happens, we should take responsibility for what we have done. With so much concrete evidence circulated online, you did not apologise. Instead, you hid behind your parents as the 'good guy', telling the media that 'Lei is the children's mother and so I will not say anything that harms her', while you use your dad's sympathy and love for you to do illegitimate things."

Lee accused Wang of fabricating and spreading falsehoods through his family and friends to defame her and salvage his public image.

Point by point, she then rebutted a few allegations made against her in the letter written by Wang's dad.

Lee attached a screenshot of a message, supposedly from Wang, asking her to tell the media that her "accusations were groundless".

In her note, she said that she had received a message on Saturday (Dec. 18), alleging that Wang would give her the house if she apologised and said that her remarks were previously made in a troubled mental state. 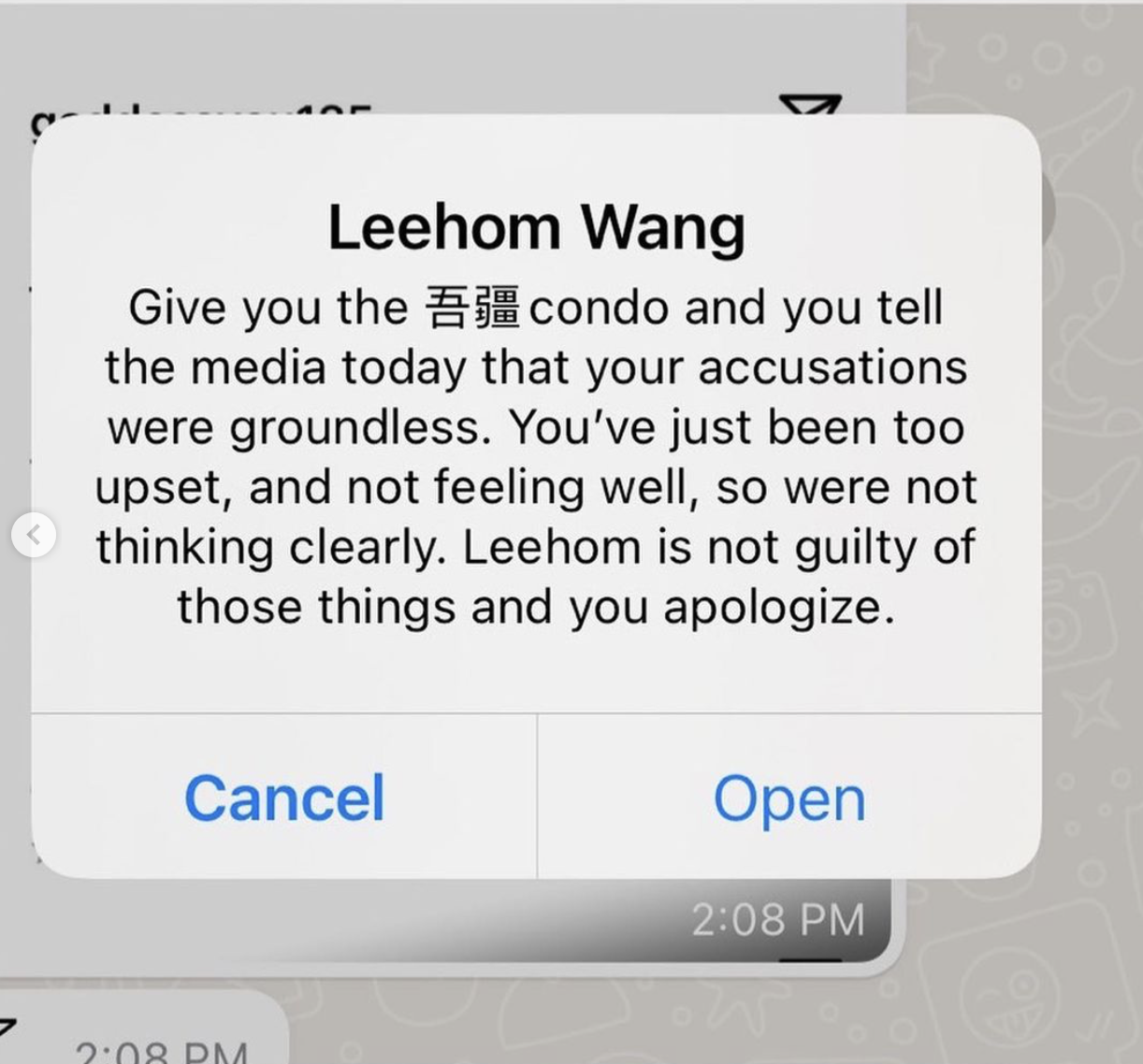 "We have known each other for so many years. Don't you know that I'm not someone who can be bought over with money?"

Lee said she has lived and raised the three children with Wang in the house, so she believes she stands a chance to get the house if she truly wants to fight for it.

"I don't need your act of charity or any terms and conditions in exchange for it," she said.

2) About her first pregnancy

Wang's dad had accused her of using their first child to threaten Wang to marry her in his letter, Lee said.

"That's an absurd accusation," she replied.

Lee's statement added that when she was dating Wang, they had marriage in mind and Wang had told her many times that he wanted kids soon as he was getting older.

As such, they did not take precautions while having sex during their dating period.

"I think it's impossible for a 37-year-old with a sound mind to not know this. If he does not want his partner to get pregnant, a man will definitely use prevention methods as a precautionary measure."

She also revealed that Wang was initially very happy about her first pregnancy. However, after sharing the news with his family, he came back asking Lee if she can abort the child or deliver the baby without getting married.

Lee said that she was appalled to hear that as it's irresponsible and it will bring shame to her family.

Eventually, Wang decided to marry her despite strong objections and emotional blackmail from his family.

Lee also said in her statement:

"I have to protect my family's image. I have received higher education and I'm not a girl with nothing. I'm still young and I will not destroy my own life by telling the media I was accidentally impregnated. As a 37-year-old successful person, Wang would not have succumbed to threats and decided to marry me. If the marriage was forced, then he should be very fearful of me, right? So why were there second and third pregnancies?"

3) Wang was "living in hell" for the past two years?

Lee also responded to the elder Wang's description of Wang's life after marriage in his letter.

He said that the past seven years of marriage were painful and Wang was living in hell for two years.

"If there was no love, how would there be children? Am I a baby-making machine?" Lee retorted.

Lee said that they were just like a typical married couple with ups and downs over the years. They've supported each other and gone through periods of both joy and conflict. She also added that their interactions were witnessed by their loved ones, and there were items such as love letters to support what she said.

"He may be an actor, but I'm not. If we were not loving, I cannot do pretend to be loving in front of our loved ones and members of the public."

According to Lee, they have not been pretending to be a loving couple since Wang wanted a divorce in 2019. Instead, they explored ways to provide a complete family to their three children despite their broken marriage.

However, she refuted the elder Wang's claim about Wang spending hours with the children every day.

"What kind of a big lie is that? How do you even know? He usually spends the last five to 10 minutes before bedtime saying goodnight to the children via video call or in person. Weekends are our family days. If he's in Taiwan, he will join, but if he's not around, he will occasionally video call us. It's already the third Christmas that he's not around and he is often absent at our children's birthdays. These are all true."

4) What did Lee ask from Wang after their divorce?

Lee denied that she had asked for astronomical fees following their divorce.

She said that her only request is to ensure the quality of life for her three children remains unchanged. This means retaining their Filipino helper, a nanny that helps out at night and a driver that they have hired.

She clarified that she did not ask for any alimony and said that she will support herself and the three children on her own.

She said she initially asked for the house but Wang rejected her. Instead, Wang said that he can let her "borrow" the house to live in, but Lee has to return it to him afterwards.

She added that these details are included in an agreement signed by both parties.

At the end of her statement, after hitting back at claims made by Wang's dad, Lee questioned if Wang had told his dad about visiting prostitutes and the affairs he had after marriage.

Lee agreed with Wang's dad that Wang is not "scum" and clarified that she's not ruining their children's image of Wang.

"I also don't think Leehom is scum, he just made some mistakes, which he has to correct. From then till now, I have tried to say good things about Hom in front of the children. Those around us can attest to this. The children's attitude to Hom is proof of how I have been trying to upkeep his positive image to the children."

Lee also demanded a public apology at 3pm today (Dec. 19) or for Wang's side to provide any solid evidence to support what they have said about her.

Otherwise, she will proceed to sue them for slander.