Update on Dec. 21, 3:25pm: This article was updated to include Rosal's apology.

Update on Dec. 22, 11:30pm: This article was updated to include a handwritten apology letter from Rosal. Rosal also shared that he has withdrawn his presence from social media entirely.

A fresh wave of outrage has swept through various social media platforms after a recent TikTok video by a Singapore youth showed him giving a particularly spicy hot take on Singapore girls and women.

In the brief clip, the TikTok user, who goes by David Rosal, compared Singaporean girls to American girls, stating that the latter know how and are able to "take care of themselves" and "groom themselves" better.

Singaporean girls, on the other hand, paled in comparison, in Rosal's opinion.

"I swear you Singaporean girls, y'all just be wearing the same sh*t, y'all just be f*cking, I don't know, not be taking care of yourselves, and y'all look like f*cking *ss.

Y'all look like y'all just died and came back from the dead. Like come on man, you gotta step your game up for real."

He then ended off the video by adding that he would probably get cancelled for this, "but whatever".

Within three days, Rosal's video has attracted over 344,100 views, as well as numerous reactions voicing their displeasure.

Commenters on TikTok called Rosal out for talking down to half of the Singapore population, as well as putting on airs using what they perceived to be faux confidence and a contrived accent.

Rosal, however, appeared unapologetic, and subsequently posted another TikTok video reiterating his stance and inviting users to react to his video via the platform's "duet" function. 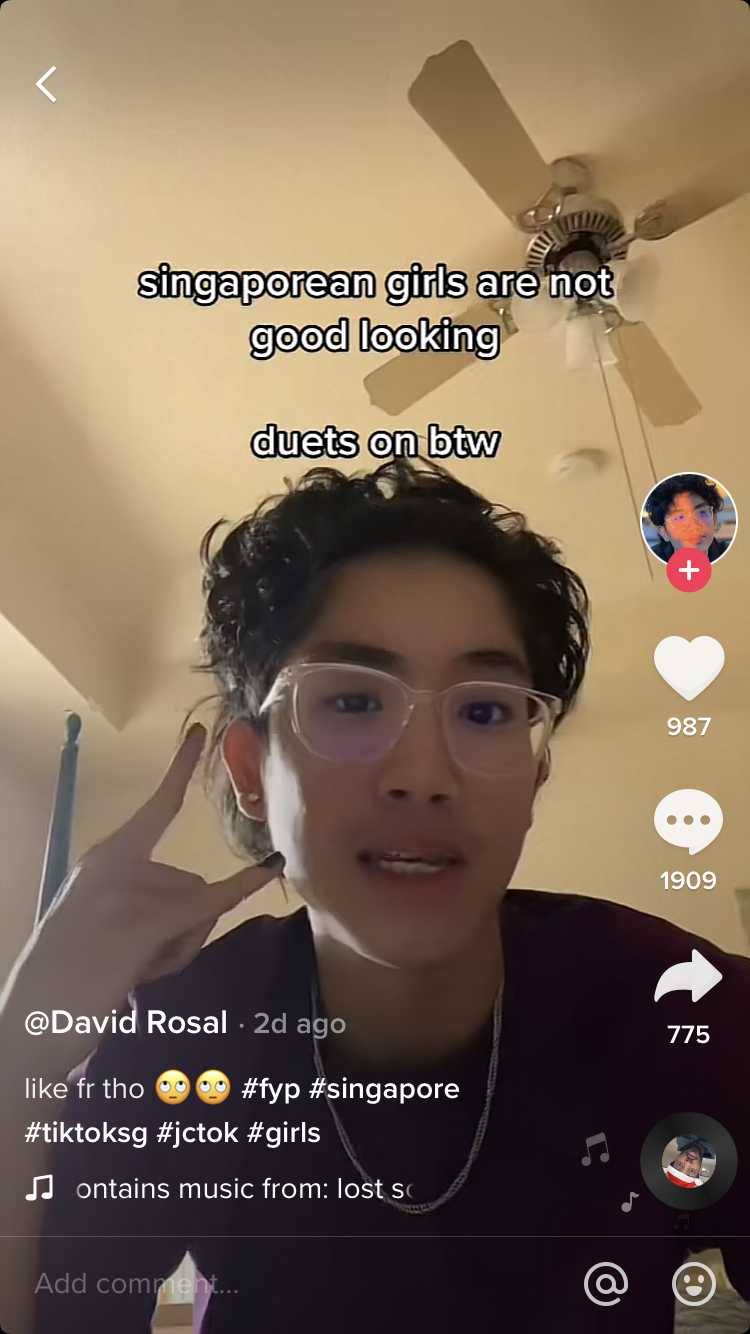 This has since led to reactions such as these:

Considering the overwhelmingly negative response to Rosal's opinion, reactions have also spilled over to Twitter, with Rosal being pinpointed as "the nation's" (or the Singapore youths') number one target right now.

People have also taken to lambasting Rosal about his arrogance, as well as making ad hominem attacks directed at his appearance and music. 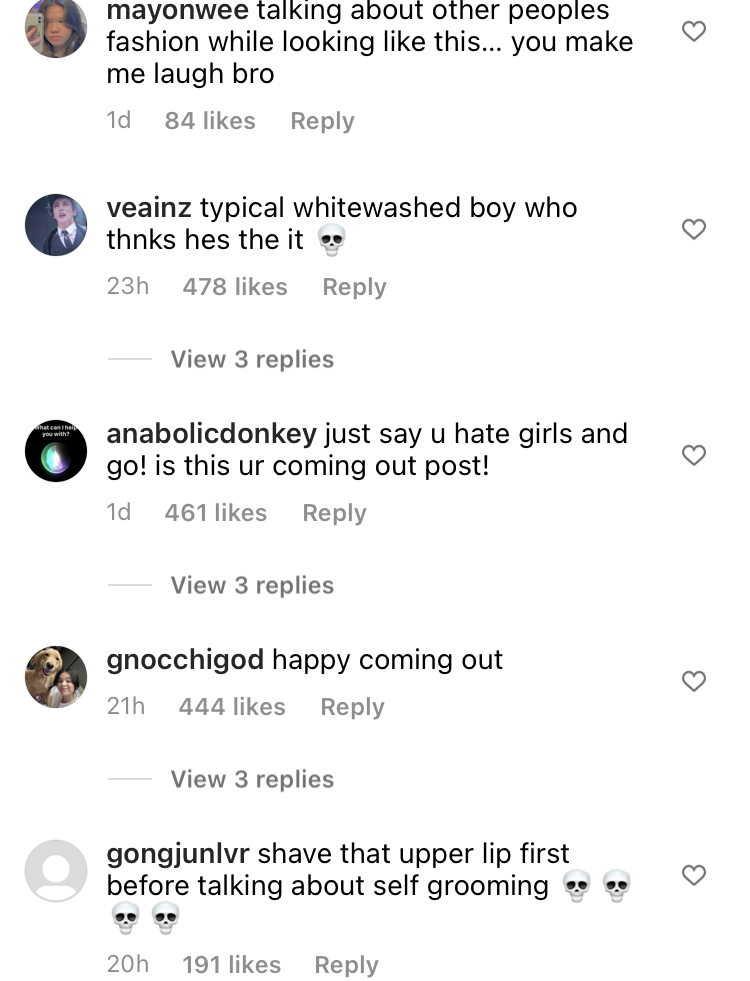 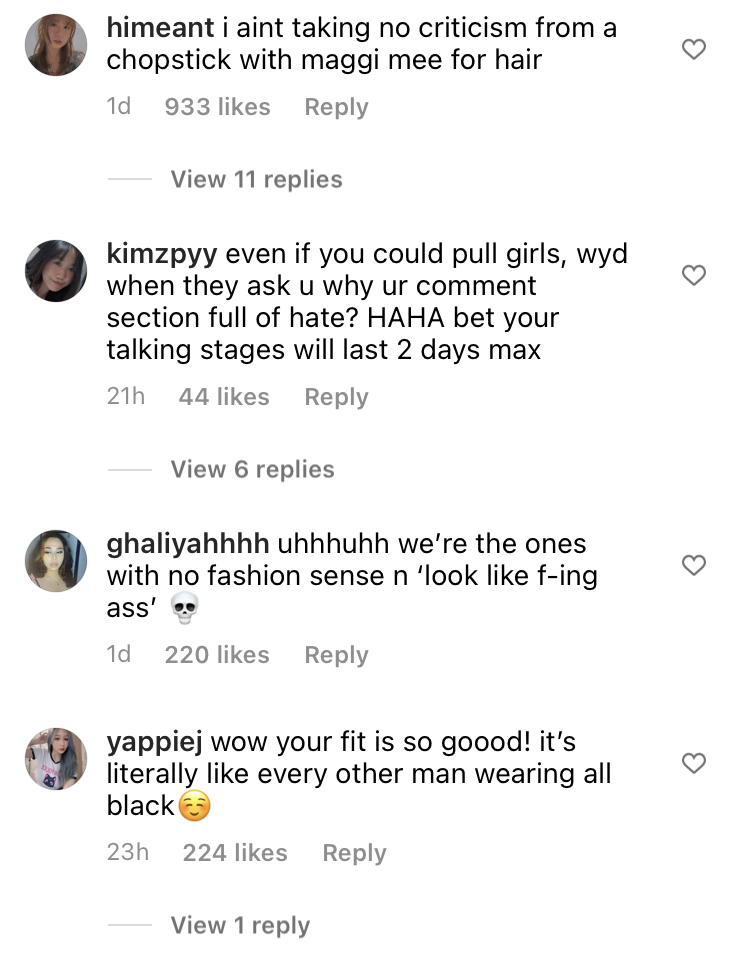 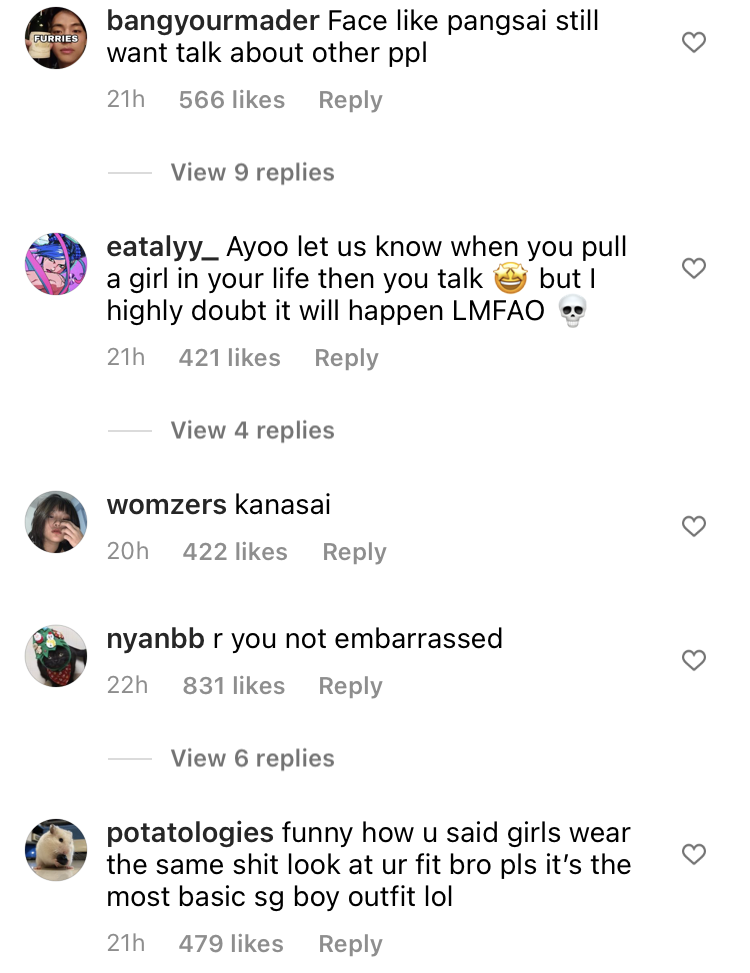 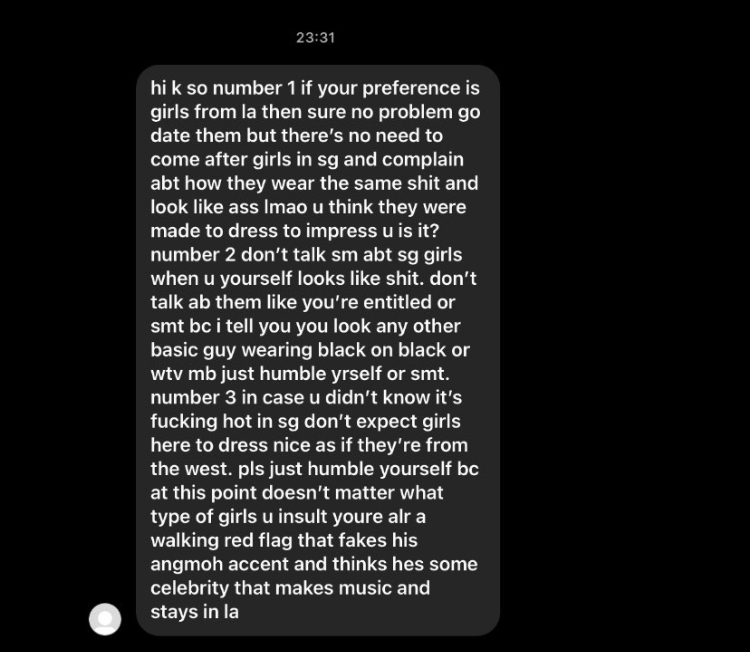 In the past few days, reactions have escalated further.

A TikTok video was posted showing a screenshot of an email sent to Victoria Junior College, which Rosal apparently studies at.

A screen shot of the video was uploaded to Rosal's Instagram Stories. The email highlighted Rosal's antics as well as other unsavoury comments he had allegedly made.

The video, however, has since been taken down. 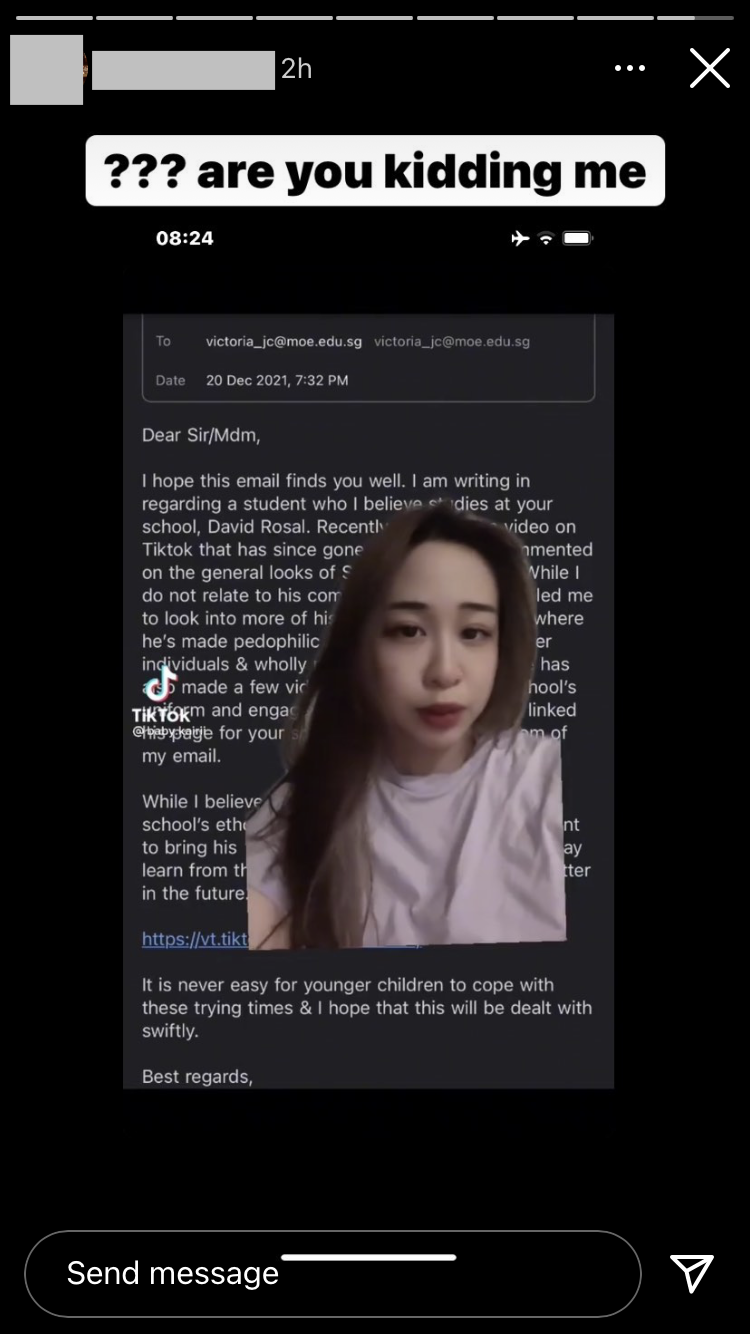 Following the kerfuffle, Rosal appeared to backtrack from his original comments — a video he posted on Dec. 20 includes a clip of a Spongebob Squarepants cartoon character saying, "I was just kidding".

On Dec. 21, he revealed in another video that he had apparently received death threats.

At around 3:20pm later in the day, Rosal uploaded an apology video, stating that he should not have made sweeping statements or generalised the female population in Singapore.

He admitted that he was not thinking when making such comments, and that he "f*cked up" and will "take full accountability for [his] actions".

@davidrrosalAlso I do request yall respect the privacy of both my friends and I, don’t dox basically! ##fyp ##sgtiktok♬ original sound - David Rosal

On Dec. 22, Mothership received a handwritten apology letter from Rosal apologising for his "harsh and uncalled for" comments.

He also shared that he withdrawn his presence from social media.

You can read his letter in full here.

"To everyone this letter may concern,

I am writing this to sincerely apologise for my irresponsible behaviour online. The comments I said regarding Singaporean girls' looks were extremely harsh and uncalled for. I understand that many are hurt or offended by what I said and I'm very sorry that what i said was rude and insensitive of people's feelings. During such trying times it is all the more inappropriate to voice out hurtful words.I apologise from the bottom of my heart the way I acted and such intolerable conduct will not repeat itself. 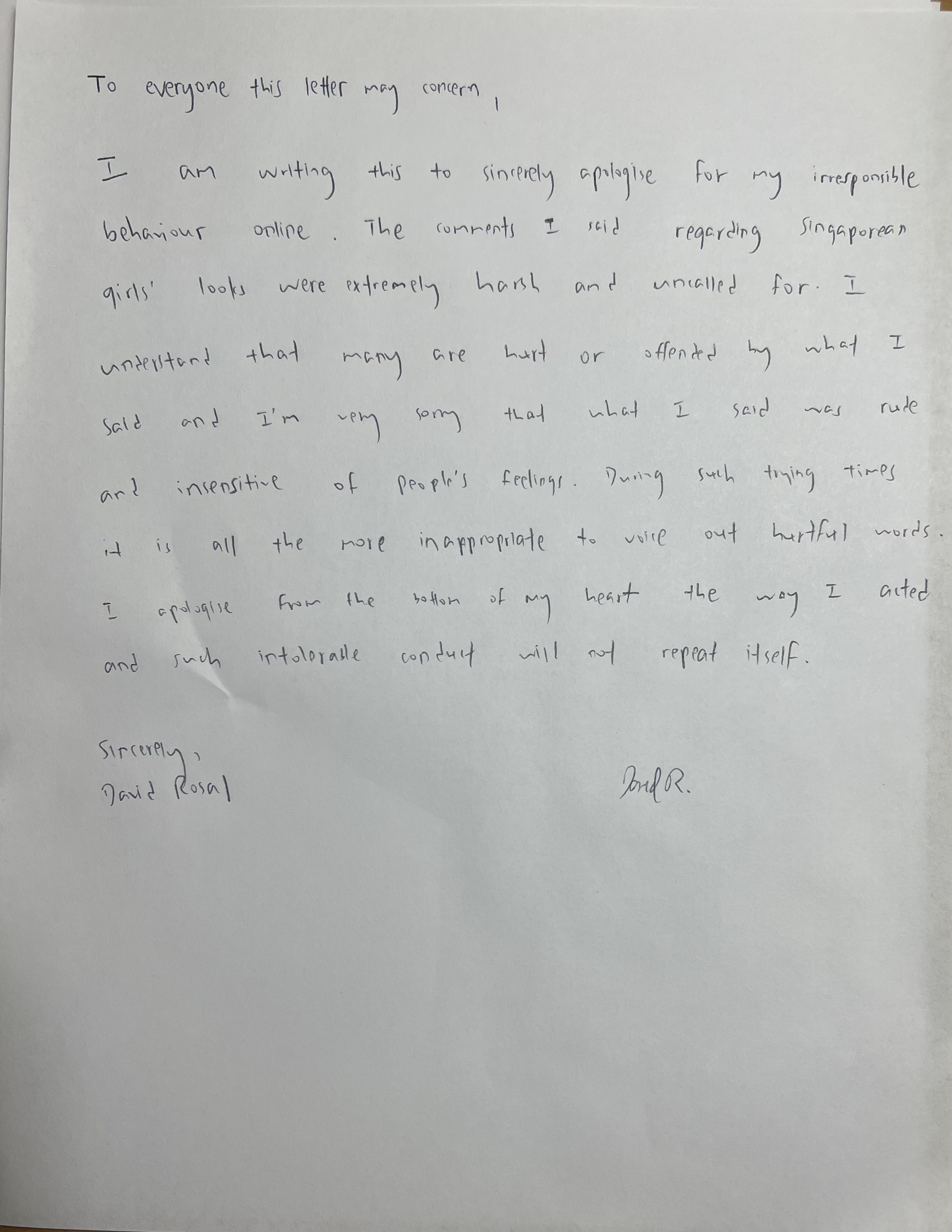