Like me, some of you may have imagined (I blame Hong Kong dramas for this) that drug raids always involve law enforcement officers breaking down doors and barging into drug dens, while the suspects will frantically attempt to dispose of all evidence and put up a fierce struggle.

While I certainly didn’t think the Central Narcotics Bureau (CNB) would bring me along for any high-risk operations, I was still expecting some actions to unfold, especially having to wake up at 4am. We set off on our way before dawn and I was surprised to find myself in Yishun. (This story is not supposed to be about Yishun but I somehow found myself there.)

The CNB officers knocked on the door, and were let in soon after. By the time I entered some time later, the suspect was sitting on the sofa and pointing to the officers where he kept the drug-related paraphernalia.

He appeared to be slightly groggy but relaxed, and was even having some casual conversation with the officers, sharing that he had booked a VTL flight for the next day.

Meanwhile, an elderly woman and two cats sat next to him in silence, watching the officers carry out the search. CNB officers, with their gloves on, took the paraphernalia out and placed them on a transparent bag. They verified with the suspect that the items belonged to him.

One of the CNB officers was also wearing a body-worn camera; a tool that CNB officers have included in drug raids since Sep. 15, 2021 to facilitate investigations and gathering of evidence. 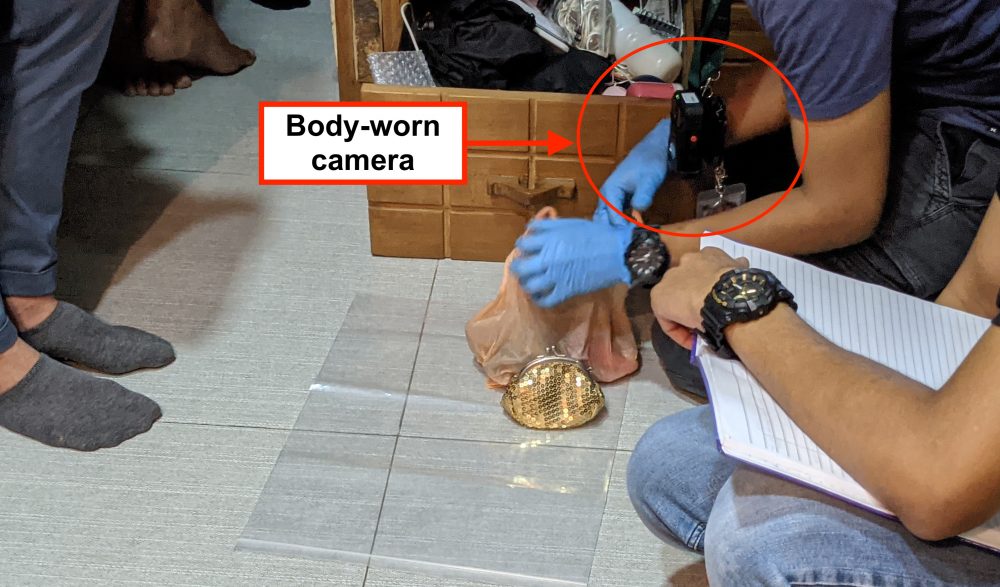 After recovering the paraphernalia, the officers recorded the seized items in a notebook.

Currently, the process is still quite labour intensive and manual but it will soon be more efficient with the aid of technology.

CNB officers will be equipped with a portable hand-held device called the Mobile Diary, which will allow them to record details such as the suspects’ statements on-the-go.

The device also allows CNB officers to geo-tag locations where the drugs were recovered, and photographs of scenes and exhibits can also be taken for reference.

Having said that, we did not take too long, about half an hour, before heading off to the next raid.

The sun was up by the time we arrived at the doorstep of the second house.

Unlike the first raid, a curious neighbour was awake and standing at her gate after CNB officers walked past her unit.

To avoid drawing unnecessary attention to the suspect, a CNB officer said they would usually close the door while conducting their investigations in the house. While waiting for the CNB officers, I looked through the peephole at the closed door.

Yes, the auntie was still waiting at her door.

And behind the closed door, the CNB officers conducted a thorough search of the suspect’s bedroom, in the presence of the suspect.

So how do the CNB officers choose where to check, you may wonder? And how do they strike a balance between conducting a thorough check and not being too intrusive into one’s privacy?

It mostly boils down to intel and experience.

A CNB officer shared with me that sometimes, their intel may come from the suspect’s family members themselves.

The officers will also take note of items that look out of place or conduct searches in areas where the person may spend time alone, such as the bedroom or the toilet. 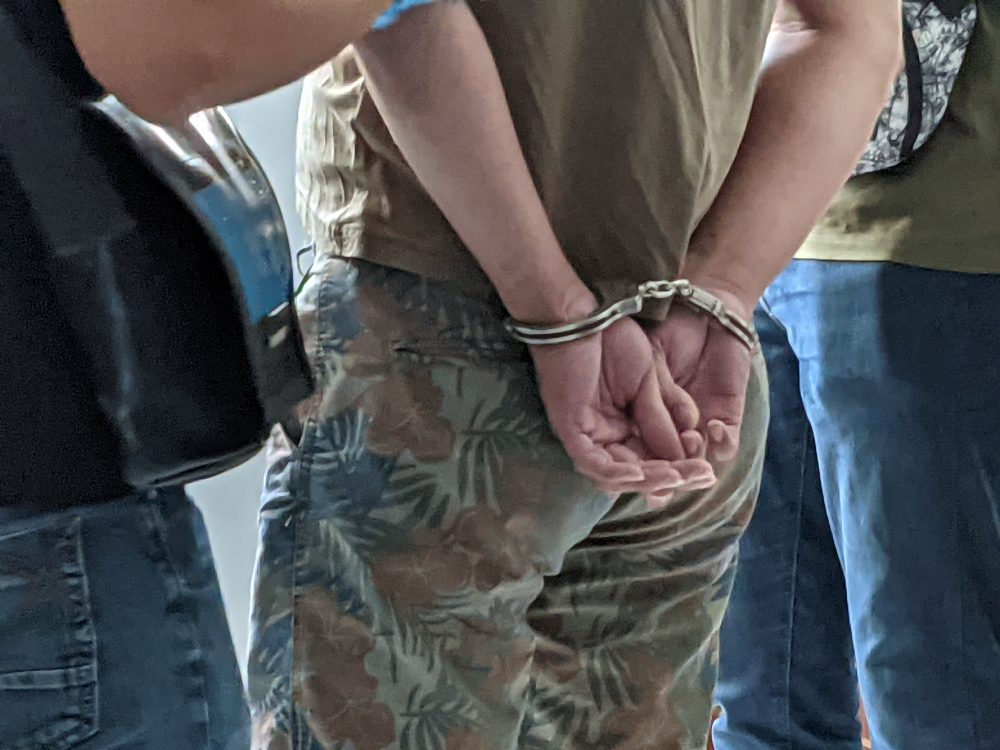 Like the first suspect, the second man who was taken by the CNB officer was cooperative and composed throughout the process.

As the suspect was alone at home, the CNB officer also helped him retrieve his wallet and lock the door before heading to Woodlands Police Division Headquarters.

The CNB officers’ work does not end after the suspects are arrested.

At the CNB office in Woodlands Police Division Headquarters, the officers collect and process urine samples from the suspects after the arrest, to determine if their urine samples test positive for drug abuse.

The suspect will then place their own urine sample into a secured metal container, and the urine samples will then be sent to the Health Sciences Authority for analysis. 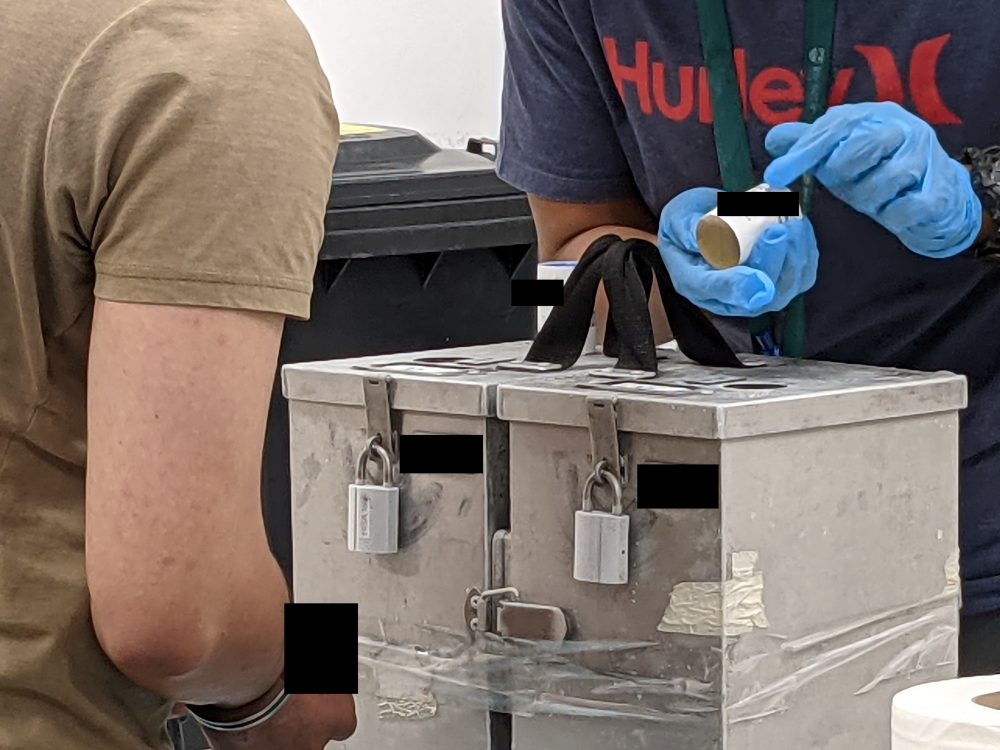 No one enjoys dealing with urine on a regular basis and it can be a form of biohazard risk to CNB officers.

Thanks to technology, the officers can now detect drug abuse with hair samples too.

While urine samples can indicate whether the suspect has taken drugs in the past week, hair samples can detect drug abuse for a longer timeframe.

To avoid embarrassing suspects or drug offenders, the CNB officers are also trained to learn how to perform haircuts so that they can obtain hair samples without leaving gaping holes in the suspect’s hair. No safe haven for drug offenders

Besides using technology at work, CNB officers also pay close attention to how the drug trade evolves with the onset of technology and social media.

The drug raids that I tagged along was part of a four-phase CNB islandwide operation targeting the drug trade conducted via newer chat applications such as Telegram.

Such chat applications, with their encrypted functions, may give drug offenders a false sense of security as they think that they can conduct their drug transactions anonymously.

However, CNB has been aware of such transactions on these chat groups and have been monitoring the situation for some time, CNB said in a recent press release.

According to Aaron Tang, Director of Intelligence Division:

“These offenders may think that such applications can offer them a certain level of anonymity to allow them to carry out their illegal activities, and they can avoid CNB’s surveillance. But they cannot be more wrong.

Regardless of the platform or tactics used in an attempt to evade detection, there is no safe haven for drug offenders in Singapore.”

The writer of this sponsored article by the Central Narcotics Bureau lost count of how many anti-drug ribbon pins she’s received.

All photos by Zheng Zhangxin