A Chinese model caught up in yet another online debate about advertisements that purportedly "insult China" has clapped back at her critics. Responding to social media users who accused her and the company she was modelling for of disrespecting China due to her "small eyes", the model, who goes by "Cai Niangniang" on Weibo, said, "Am I not Chinese just because I got small eyes?"

She added that she was simply doing her job as a model, and that she could not understand how she had "insulted China".

"My eyes are the way they are, and they look even smaller in real life. Does this mean that I shouldn't have chosen modelling as a profession just because of how my eyes look? Have I insulted China by being born this way? Can I sue y'all for discrimination then?

I fully agree that we should love our country! But to kick up a fuss online over everything and anything, that's sick!"

Cai also posted a screen shot of the comments targeting her small eyes, and accusing Three Squirrels, the snacks retailer which she modelled for, of playing up "Western stereotypes" and "fawning over" the Western people.

A comment said, "(...) this kind of makeup is clearly done according to the preference of foreigners. What our ancestors liked was 'phoenix' and 'peace blossom' eyes, not to make oneself look ugly on purpose, don't you also do makeup that makes your eyes look bigger? Big name brands have the responsibility to protect the image of the country. Foreigners all say the Chinese have yellow skin and squinty eyes. Why don't you take a look at how many of their celebrities have small eyes? Is this not insulting China?"

Most supportive but not all convinced

While most commenters empathised with her situation and expressed their support, a good number continued to attack her.

They posted images taken from one of her Douyin (Chinese version of TikTok) videos where she was exaggerating the slanted look of her eyes -- Cai has since explained that it was simply a "dance movement". 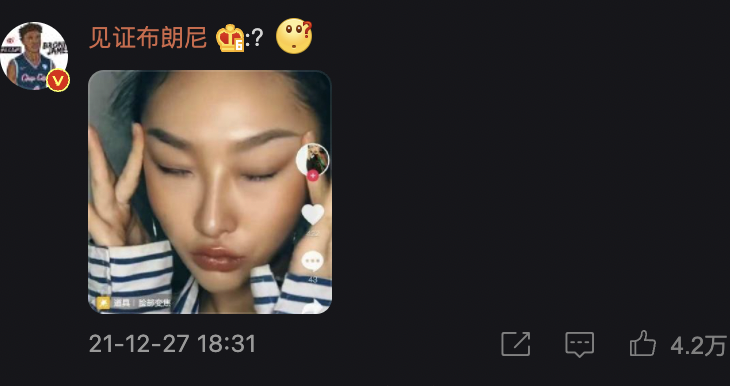 Still, many commenters came to Cai's defence, even expressing their exasperation at those who continued to harp on her small eyes.

"I can't even. If this continues, won't advertising companies simply stop hiring models with small eyes? Is this behaviour that pressures others and makes it difficult for them to find jobs being patriotic to the country?"

"Do people really think that white people discriminate against Asians because of their squinty eyes? They are totally mistaken here. White people are racist against Asians, and so they take the squinty eyes and mock them. If white people take the yellow skin now and use it as a stereotypical image to mock us, will a company be 'insulting China' if they hire a model with a more yellowish looking skin tone? These people hide under the flag of patriotism, don't know how to embrace diversity in beauty, and end up standing on the same side as the bullies. Ridiculous."

Ad taken down in wake of backlash

According to the BBC (Chinese), the ad in question has already been taken down by Three Squirrels.

The snack retailer also apologised for the "discomfort" brought about by the ad.

Although the ad was released in 2019, it resurfaced two years later on Dec. 26 when a netizen posted it again, sparking another round of contentious debate about companies that "insult China" in their promotional materials.

The controversy has even led People's Daily, the official newspaper of the Chinese government, to publish a commentary on the issue that includes comments from a number of their reporters.

A reporter commented that while the Chinese people have reason to be offended when foreigners mock them by mimicking the stereotypical slit eyes, they should be more discerning towards such "insults", and not jump to conclusions and deem others as "insulting (the) Chinese" simply because the model has small eyes.

Not long ago, French luxury fashion house Dior has also come under fire for a photo that featured a Chinese model with mono lids and makeup that emphasised the "slanted" look of her eyes.

Responding to the massive backlash among social media users who thought she deliberately made the Chinese model look "ugly", the Chinese photographer in charge of the photo's direction has since apologised for her "ignorance" and "immaturity".