This sponsored article is brought to you by Viddsee.

Singapore is known for many things, including being a melting pot of cultures.

We have four official languages, and unofficially speak Singlish, which is an amalgamation of various languages and dialects spoken in Singapore.

As students in Singapore, we’ve also chanted this part of the pledge at least five times a week: “Regardless of race, language or religion.”

But do Singaporeans do as they say in the pledge?

We asked our readers on Instagram to share if they’ve ever unintentionally offended someone of a different religion. 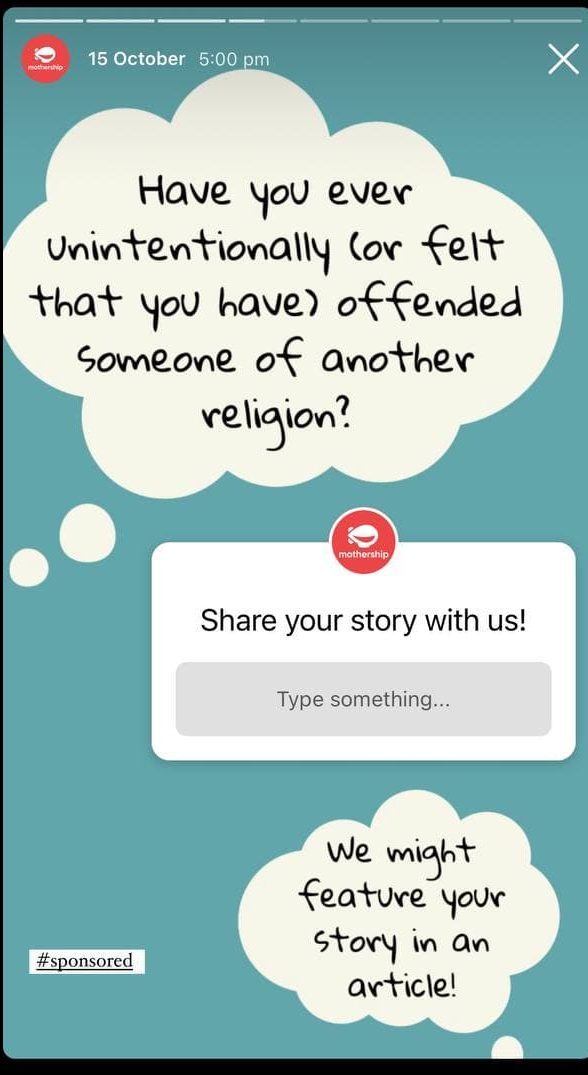 Here are their responses:

One of the more common responses we received included this one:

“I didn’t know it was Ramadan (Muslim fasting month) and drank water in front of the Muslims. I got scolded badly…”

We have to add, though, most Muslims would say that it’s totally ok to eat or drink in front of them during Ramadan.

You’d often hear that food can bring people together in a way nothing else could.

But it also seems like food can bring a whole lot of awkwardness to the table:

“Went to my friend’s house who is a Buddhist and ate cheeseburgers in front of the altar.”

This next experience probably left the reader thinking “oh crap”:

“A visitor from the U.S. came to Singapore and I told him he had to try chilli crab. He is Jewish.”

For context, Jews adhere to the kosher (Hebrew for “fit” or “proper”) dietary laws, and shellfish is not kosher food.

You could say that this reader’s question to her friend was not well-done:

“Asked my Hindu bestie if she wanted steak.”

Another reader of ours got us questioning he ended up eating instead:

“I went to a satay stall and ordered pork and chicken satay. Then I realised it’s a Muslim stall.”

A reader shared with us how a passing rhyme can turn into an embarrassing experience real quick.

“I said the phrase ‘How now, brown cow?’ to my Indian friend without realising it.”

For the uninitiated, the phrase “how now brown cow” is a meaningless sentence that is often used to teach the “ow” sound.

Nowadays, it is a lighthearted way of asking “what’s next?”.

Fun fact: The term “brown cow” is an 18th-century Scottish description for a barrel of beer.

Meanwhile, we hope this reader finally understood the importance of keeping some thoughts to themselves:

“I once muttered ‘So black’ in a lift… I was actually referring to a dead cockroach on the floor.”

Coincidentally, there was someone else with tanned skin in the same lift.

Exploring religions in Singapore with Singaporeans

As these peculiar and perhaps second-hand embarrassment-inducing experiences have shown us, we probably offend our peers (unintentionally, of course) more often than we think.

But some of these experiences have also brought up the importance for us to gain knowledge of the different religions.

One of the best ways to do that is to spark an open conversation about religion with our peers.

And that’s exactly what happened in “Viewfinder”.

“Viewfinder” is a series produced by local video platform Viddsee.

The show follows individuals from different backgrounds as they watch “Letters To God”, a documentary series that focuses on the unlikely friendship of two very different individuals — a Taoist medium and a Christian.

After watching the five-part series, the guests on “Viewfinder” go on a deep-dive discussion, asking unfiltered questions on the topic of religion, including the understanding of different faiths, loss of faith, and maintaining interfaith relationships.

You can watch the episode here.

To find out more about religious harmony in Singapore, visit the Inter-Racial and Religous Confidence Circle’s Facebook page.