An outing to catch the uncommon Oriental dwarf kingfisher in action on Nov. 13 turned into one of confusion and sadness for the nature photography community, after an unexpected turn of events.

The tiny bird is believed to have been eaten by a fish when it failed to surface after diving into a pond.

Speaking to Mothership, one nature photographer, Daryl Tan, shared more about the sequence of events that took place.

For context, the Oriental dwarf kingfisher is an uncommon migrant to Singapore, found in Northeast India, Southwest China and other parts of Southeast Asia.

Its rarity, coupled with its colourful plumage, make it an attractive model for photographers.

Tan also shared that previous individuals of the species typically appear in more forested areas and are quite skittish, making them hard to photograph.

This particular kingfisher however, was spotted at Bishan-Ang Mo Kio Park at an open and well-lit space — perfect for close-up shots.

Additionally, the bird seemed unafraid of humans, and photographers could venture as close as 3m to it.

While Tan himself isn't much of a "birder" (a colloquial term for bird watchers or those who photograph birds), he had decided to make the trip down as it was the first time the Oriental dwarf kingfisher appeared in such an open location.

Long queues but crowds were managed

In preparation for the flocks of photographers arriving at the park to snap a shot of the kingfisher, staff from the National Parks Board (NParks) were there to ensure safe distancing, and had set up a queue system and designated photo spots to reduce crowding.

Staff have previously been activated at other birding hotspots, including the sighting of a Fairy pitta at Hindhede Nature Park.

At Bishan-Ang Mo Kio Park, photographers had to wait in line, with one group of 10 allowed at each of the three photo spots for 30 minutes, before rotating to the next photo spot.

Here's what the queue looked like on that day.

Tan shared that with the help of NParks, the queue was long but orderly, and he praised staff for being patient with anxious photographers as well as managing to the keep the crowd under control.

Disappeared into the water

Tan himself spent around an hour queuing before he could make his way to the photo spot.

In the three minutes he spent observing the bird, it dived into the waters of the nearby pond at least twice to catch fish.

Each time, it emerged with a tiny fish in its beak.

Tan recalled that on its subsequent dive, there was a louder splash than normal when the bird entered the water.

Although the photographers there waited, the kingfisher did not emerge from the water.

"Everyone, including people at photo spots B and C, saw it dive but no one saw it surface. We started looking around to check if it surfaced elsewhere but nothing."

The photographers started to worry as time elapsed, Tan said, with some speculating that the kingfisher might have gotten entangled in aquatic plants.

One man even went towards the edge of the pond in an attempt to search for the missing kingfisher, but to no avail.

NParks staff eventually intervened and advised people against venturing into the pond to look for the bird as it would disturb wildlife in the water and the pond's ecology.

Likely snatched up by snakehead

One photographer who was in the queue at the time and had a better view of what happened apparently saw a big splash, "as if something grabbed the kingfisher when it entered the water".

Upon checking the water once more, Tan also noticed some snakehead fries (baby snakehead fish) inside.

Tan and other photographers thus came to the conclusion that the kingfisher was likely gobbled up by an adult snakehead fish when it dived into the water.

An angler Tan spoke to shared that a "topwater explosion" will occur when a snakehead hunts, which Tan said was what had happened before the kingfisher disappeared.

A fish snatching up a bird might seem surprising, but most species of snakeheads are known to be able to grow up to 90cm in length. They are a highly predatory species.

Meanwhile, the Oriental dwarf kingfisher is tiny, and only grows to about 14cm.

Following the freak incident, Tan confessed that the entire incident was "unbelievable", especially as it had vanished before his very eyes.

Everyone there was "flabbergasted", he added.

He shared about the shock experienced by the photographers present and how it rippled through the rest of nature community:

"It was so quick and so brutal that no one could believe what happened. Even after ten minutes, many present still wanted to do something or at least try to do something to save the Oriental dwarf kingfisher.

Many refused to leave still and continued to search for the bird. Even birders and nature enthusiasts who were not present were shocked when news started to spread online."

Many in the community experienced a "sense of great loss" as well when it confirmed that the kingfisher was likely gone for good, Tan added.

This is one of Tan's last photos of the bird before it disappeared beneath the water.

Since then, numerous tributes to the small bird have been posted to social media. 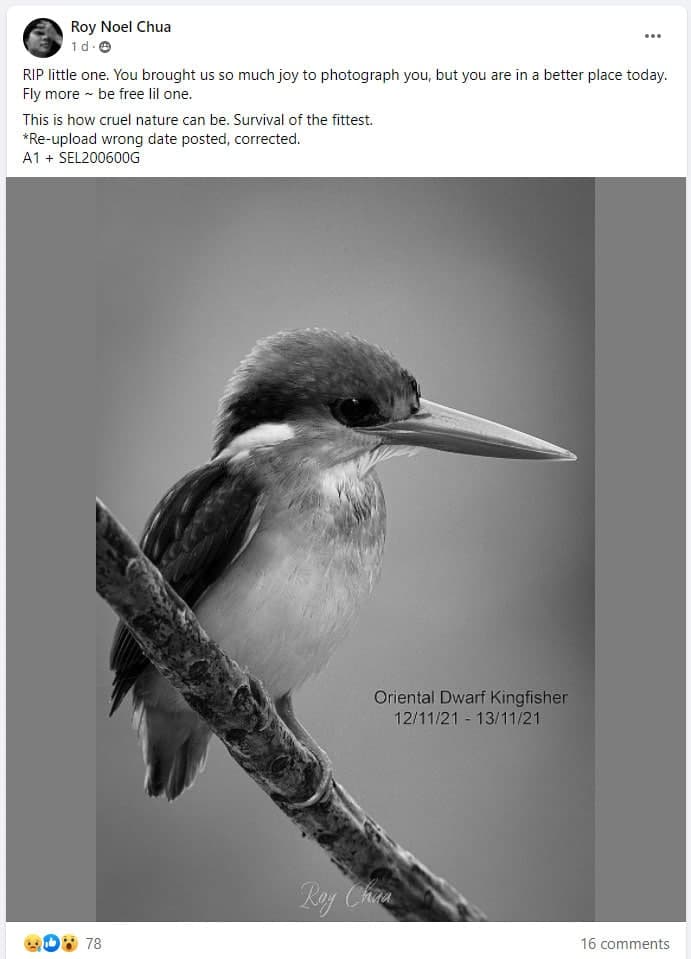 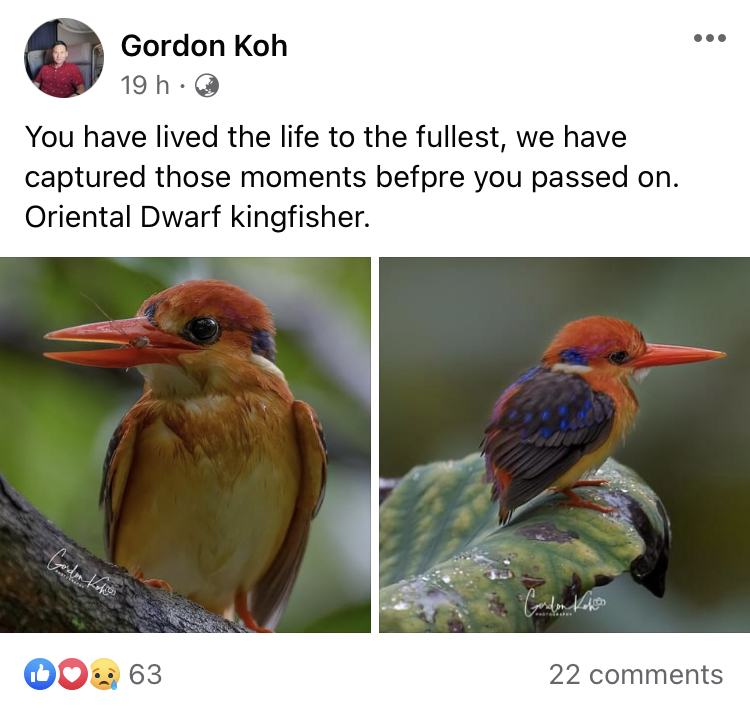 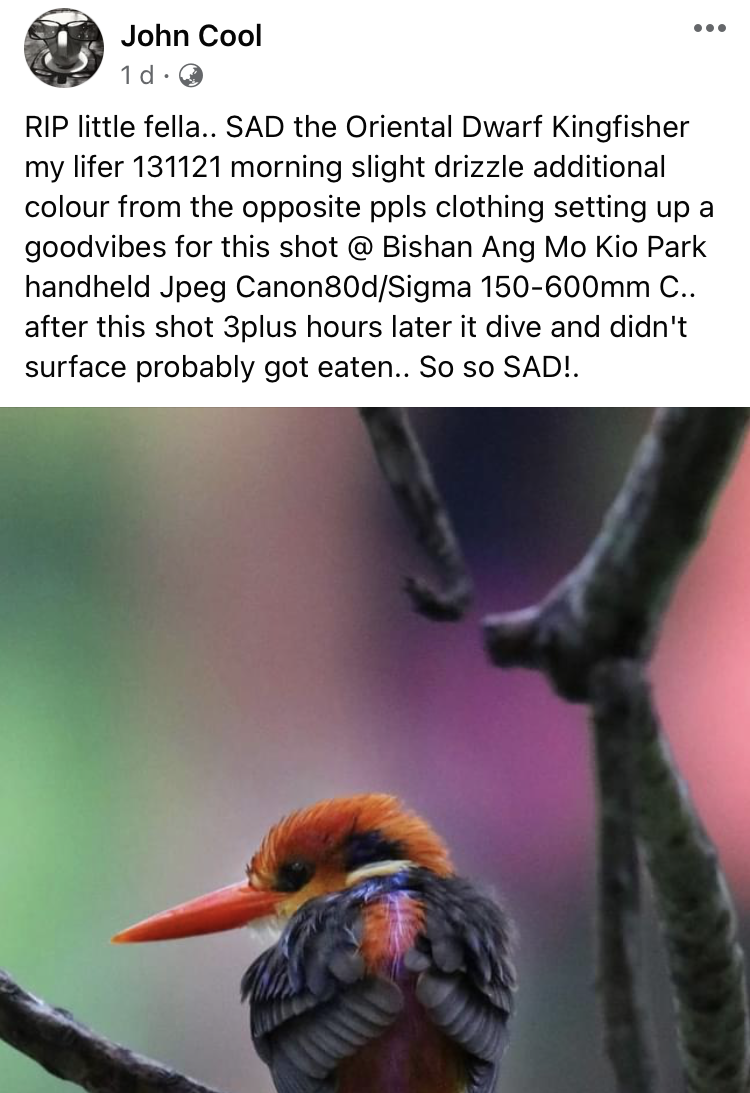 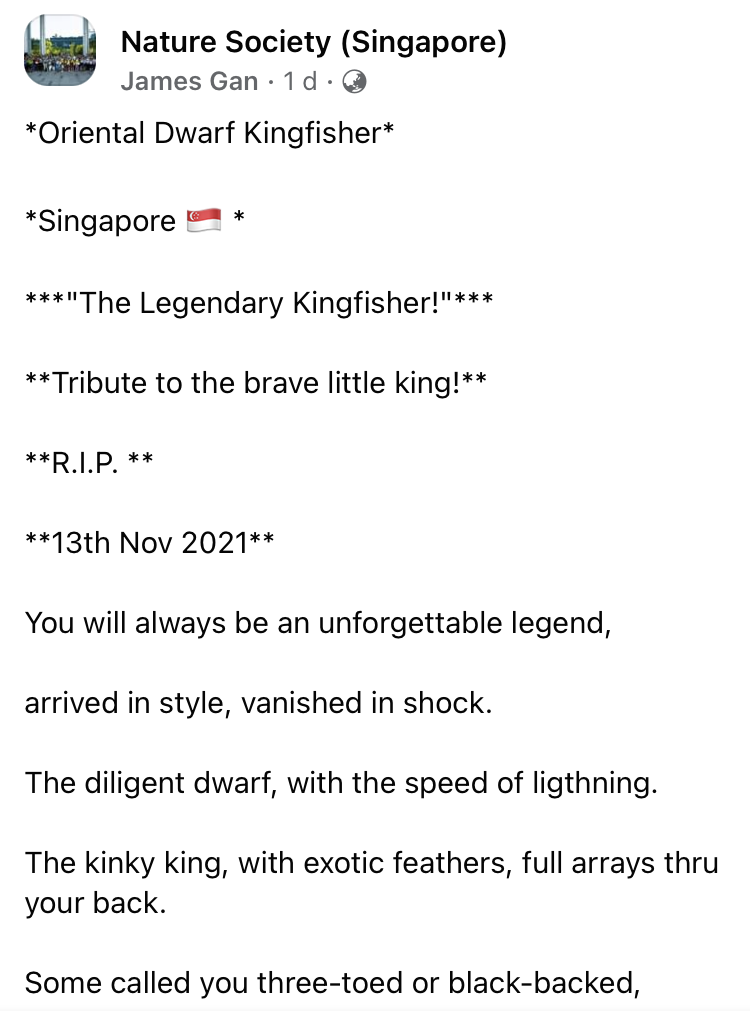