Two men were seen cooking bak zhang, a.k.a. rice dumplings, along the HDB corridor outside their flat.

A video of the incident was posted on the Singapore Incidents Facebook page on Nov. 22.

In the video, two people were seen boiling bak zhang in metal tins that used to hold cooking oil along their HDB corridor.

Underneath a metal tin was a stone charcoal stove with visible open flames used for the cooking process.

Within seconds, a batch of the freshly cooked bak zhang tied together with raffia string was removed from the makeshift pot.

The bak zhang was placed on a plate and taken into the house. 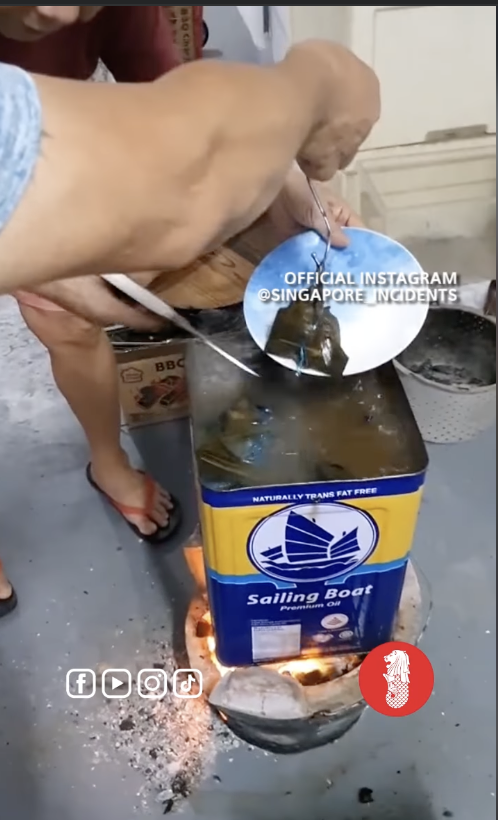 It appeared that the man couldn't wait to get a taste of the freshly cooked food.

The rest of the bak zhang were lowered back into the boiling water.

And it was evident this wasn't the first batch of bak zhang to be cooked as there were dozens more hung on the laundry pole stand at the side.

There were also plastic bags full of uncooked bak zhangs on the ground.

A comment in response to the video said this incident likely took place during the Dragon Boat Festival, which usually falls in June.

One commenter mentioned that cooking in the corridor may be dangerous as it may cause a fire or potentially harm children nearby.

The caption of the video even wrote: "Please do not cook along HDB corridor."

However, others didn't find any issue with the family choosing to cook along the corridor.

One commenter said that boiling dumplings won't make the area oily or smelly and probably is not a fire hazard if the open flames are being observed.

He added that if it only takes place during a festive period then it should be okay.

Only seen in the olden days

Others were fascinated by the scene as it reminded them of the kampong spirit back in the day.

One commenter said: "(In) the olden days, anyone can cook along the corridor whether it’s dumplings, keropok (deep-fried crackers made of either fish or prawn) or vadai (fried fritters), everyone gets to enjoy. Nowadays, you can’t even place your bicycle along the corridor without being complained."

Another said the video reminded him of how his family used to prepare different types of rice cakes namely, ketupats and lontongs, during Hari Raya.