How long would it take to walk through what must be one of the longest HDB corridors in Singapore?

Anne Ho, who is a realtor, found herself at Block 34 Whampoa West—a curved HDB block with a corridor that spans about 320m—to find out.

One end to the other: 3 minutes 59 seconds

Starting at one end of a corridor, she started her timer and made her way through the entire block.

Documenting this in a TikTok video, she pointed out various interesting things she noticed along the way, such as the view from the high floor, a cactus that has outgrown the space it is inhabiting, as well as an unusual HDB gate design, which Ho says resembles a fish bone.

When she finally stopped her timer at the end of that corridor, she had taken exactly 3 minutes and 59 seconds.

Which might be great fun for children playing block catching, but probably quite tough on delivery riders who have lost their way, as pointed out by commenters on TikTok.

HDB corridors that seem to go on forever

This is what the Whampoa block looked like in the 1970s (fun fact: the block was initially painted entirely in white, the current blue and white appearance is a fairly recent addition).

This is not the only HDB block in Singapore with curiously long corridors, though.

Some others in Singapore that are still standing include 121 Paya Lebar Way (completed in the late 1970s), with 15 segments:

(Block 79 of Toa Payoh Central, a relatively straight but ever-so-slightly curved HDB block, also had a long corridor. It was completed in the 1970s, and torn down in the 2000s.)

Corridors as a social interaction space

One similarity between the Whampoa, Paya Lebar and Kim Keat blocks is that they were all completed within the same era — sometime in the 1970s.

The earlier HDB designs featured lengthy slab blocks (albeit with corridors of varying lengths), something that was common between the 1960s to the 1980s. The point block design was also introduced during this period during the 1970s.

William Ng, a Singaporean architect, said that corridors were envisioned as "social interaction spaces" in the post-independence era.

Eventually, though, these corridors eventually came to be seen as a potential source of nuisance, as people tended towards an increased desire for privacy.

After all, it probably takes the most social and open of individuals to actually enjoy having strangers walk past their door (and maybe even look into their windows) every so often.

An article from 1972 cited other ills, such as littering and noise — courtesy of children playing along the corridors: 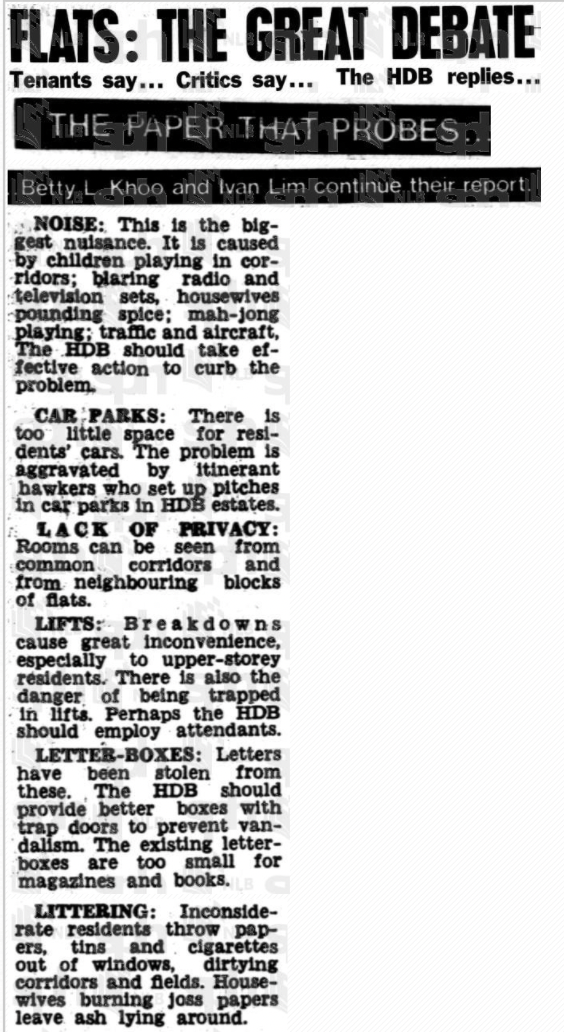 These little annoyances may also hint at why it made perfect sense for HDB dwellers to yearn for, and even value having living spaces that offer more privacy.

In the late-1980s, a "buy corridor space" scheme was introduced by HDB, which would allow for "more space, better security and privacy".

Basically, it gives home owners the option to purchase the recess entrance and common corridor space outside of their unit, provided that their unit meets certain conditions.

Following the initial announcement, "good response" was reported by the Straits Times, with nearly 250 applications being submitted in less than two months.

The sale of recess areas is still available today, and the current list of conditions can be accessed on the HDB website.

Long corridors, like those seen in the Whampoa and Kim Keat flats, seem to have vanished in the newer HDBs.

Or perhaps it has somehow evolved to take on a different, more modern form.

The sky link bridges connecting the various [email protected] blocks on the 26th and 50th level might be argued to be a particularly long HDB corridor, for instance.

Quick note, however, that the 50th storey is actually not a residential floor and is closer to a skypark of sorts. Level 26 is also accessible only to residents.

But a bigger and more crucial difference between the corridors of the Duxton flats and the 1970s blocks? The layout of the units.

At Duxton, every unit is made to resemble a corner unit, according to this Stacked Homes review, which means that residents don't get strangers peering into their homes as they walk through the corridor to get to their unit.

A quest to build communal spaces while still offering privacy

As high-rise living becomes increasingly sophisticated and continues to evolve through the decades, the perennial question remains: How do we build communal spaces into public housing without sacrificing on privacy?

Gone are the days in the 1970s, where emphasis was placed largely on increasing housing supply to meet the needs of a fledgling nation.

By the 1980s, it was clear that housing had to go beyond just offering a roof above people's heads. The authorities started looking at how HDBs could create spaces to foster a shared sense of belonging.

Eventually, the idea of "communal spaces" was further reimagined in the 1990s and even into the 2000s, with various HDB block designs and void deck layouts getting increasingly complex.

Top photo via Anne Ho/TikTok, HDB estates of the past Facebook