Police have arrested a 20-year-old woman after she allegedly asked for donations to cover the cost of bringing a stray cat to a local vet and forged the vet bill.

In a Facebook post on Nov. 16, a user named Nora Nur posted an urgent appeal for funds in the Facebook group Sayang Our Singapore's Community Cats.

According to screenshots of the post, which appears to have since been removed, she claimed that she had found an abandoned cat named Gogi in Punggol three weeks ago. She said that after bringing Gogi to the vet, it was discovered that Gogi was suffering from Feline Infectious Peritonitis (FIP) and possibly metritis.

Nora Nur claimed that she did not have the savings for Gogi's treatment, which she purported would cost around S$800 for the hysterectomy and at least S$6,000 for the FIP treatment.

Thus, she appealed to others in the group to transfer her money to contribute to Gogi's vet bills, saying that "a small amount such as $5 $10 also can help to save her life".

Nora Nur also posted photos of the cat she claimed to be Gogi, as well as a photo of the alleged vet bill.

Vet said the receipt was not generated by them

However, later that same day, another member of the Facebook group, Lee Siew Yian, posted an update on Nora Nur's appeal for donations, calling it a "scam".

Lee said that she had reached out to the vet clinic in question, Frankel Veterinary Centre, and included a screenshot of an email from the vet clinic.

In the email, the clinic confirmed that the receipt that Nora Nur had posted was not generated by their clinic, and said that they had found "several discrepancies that raise concerns on the authenticity of the receipt".

Lee also pointed out several other discrepancies, such as the UEN on the receipt posted by Nora Nur being different from Frankel Veterinary Centre's registered UEN.

In addition, the name on the PayNow account that Nora Nur had asked people to send money to was not her own name, but rather "Davis".

In a news release on Wednesday (Nov. 17), police said that they had received a report on Nov. 16 claiming that a woman was soliciting donations via crowdfunding on social media.

"The woman had purportedly solicited donations from victims for the purpose of providing medical treatment to a stray cat that was taken to a local vet. It was later discovered that there was purportedly no such cat being treated.

The woman had also allegedly forged a receipt to make it seem like there were medical bills paid for the stray cat."

Through follow-up investigations, officers from Bedok Police Division established the identity of the 20-year-old woman and arrested her.

Preliminary investigations found that a total of about 60 people had responded to her appeals and made donations to the cause.

Another 20-year-old man is assisting in police investigations, police said.

The offence of cheating carries a prison term of up to 10 years, a fine, or both.

Gogi is allegedly in Vietnam, not Singapore

Lee later updated her post with further information about the situation, after she allegedly spoke with Nora Nur over the phone.

Nora Nur claimed that Gogi and her disease are real, but that Gogi is in Vietnam and not Singapore.

She claimed that "Gogi was rescued and they are desperately trying to save her life", but fundraising efforts failed in Vietnam so her friend asked for her help in Singapore.

Lee said that a Vietnamese friend of hers had called the vet in Vietnam and confirmed the bill amount. However, she noted that Nora Nur rejected her video call and has not been able to provide evidence of transferring the funds to Vietnam.

Lee added that there continue to be "a lot" of discrepancies in Nora Nur's statements, and "the trust has eroded".

Many people commented on Lee's post, pointing out further discrepancies in her story, such as the fact that some of the photos and x-rays that she had posted purportedly of Gogi were labelled as "canine" or had been previously posted by other users on Facebook.

Several criticised her for using a sick animal, and people's desire to help the cat, to scam people of their money. 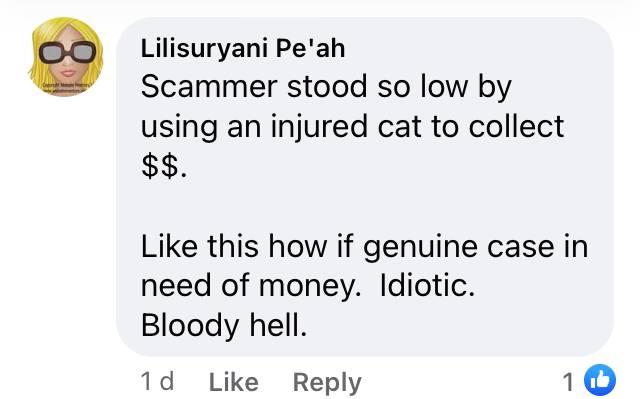 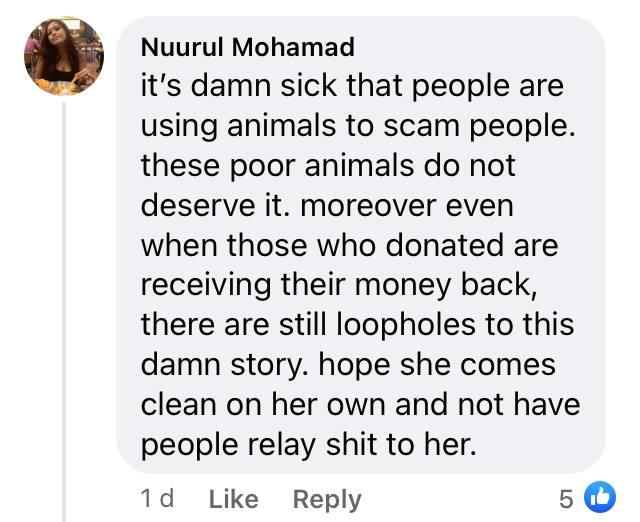 In a Facebook post on Nov. 16, Nora Nur said that she had decided to transfer all money back to the people who had donated. She insisted that the operation had indeed occurred in Vietnam, adding, "I really never try to scam any money."

She said that she "sincerely apologise[s]" for what had happened, attributing it to being "just too anxious to save Gogi".

Nora Nur said that her mother will sponsor all of Gogi's medical bills.