Ya Kun Kaya Toast, the staple Singaporean coffee-and-toast chain, has become the latest foreign brand to be targeted by Chinese social media users after their promotional material appeared to list Taiwan as a country.

Photos of the promotional graphics have been making rounds on Chinese social media site Weibo.

The images were taken from the chain's Nanjing branch in Golden Eagle shopping mall, according to Chinese state-controlled media Global Times (GT).

Speaking to GT, a shopping mall staff confirmed that the Ya Kun branch has since been shut down, with no reopening date announced.

Taiwan listed alongside nine other countries

In a short video that was viewed over 4 million times, Chinese media btime reported that the graphic was spotted at the branch on Oct. 16.

The promotional graphic was accompanied by the caption, "Our (Ya Kun) 40 over branches in 10 countries have received tremendous response".

Taiwan was seen listed alongside nine other countries, which are China, Japan, South Korea, the Philippines, Myanmar, Indonesia, India, Maldives, and the United Arab Emirates.

This prompted numerous criticisms directed towards Ya Kun and Singapore, where the chain's headquarters is based.

Many Weibo users accused Singapore of being "anti-China", while some others called for a boycott on the brand as well.

Several netizens even insinuated that Taiwan has to be brought under Beijing's control for such incidents not to happen again.

"It is absolutely (done) on purpose."

"Singapore is a country that is anti-China, (they) think highly of themselves, and look down on China."

"Resolutely boycott (Ya Kun), (hope) whoever eats (there) chokes to death."

"Actually, that's the case (referring to Taiwan's sovereignty issue) for most outsiders, if the status quo remains, there will be more similar incidents to come."

"85°C (Taiwanese bakery) tried this before as well, but has now shut down all its outlets here."

Citing btime's video, several Weibo influencers joined the discussion, criticising the Singaporean brand over the promotional material, and joined calls for a boycott as well.

The news was reposted by Shandong Province's Lanshan Prosecution Office on their Weibo page too.

Other Ya Kun branches in Nanjing have also reportedly denied displaying the promotional material in their shops.

Meanwhile, Ya Kun's branding and market development director Jesher Loi told The Straits Times that the chain is working with authorities on the issue.

Ya Kun: "Taiwan is part of China"

In response to the backlash, Ya Kun has issued a public apology addressing what they said was a "mistake", while reaffirming to its Chinese customers that "Taiwan is an indispensable part of the People's Republic of China". 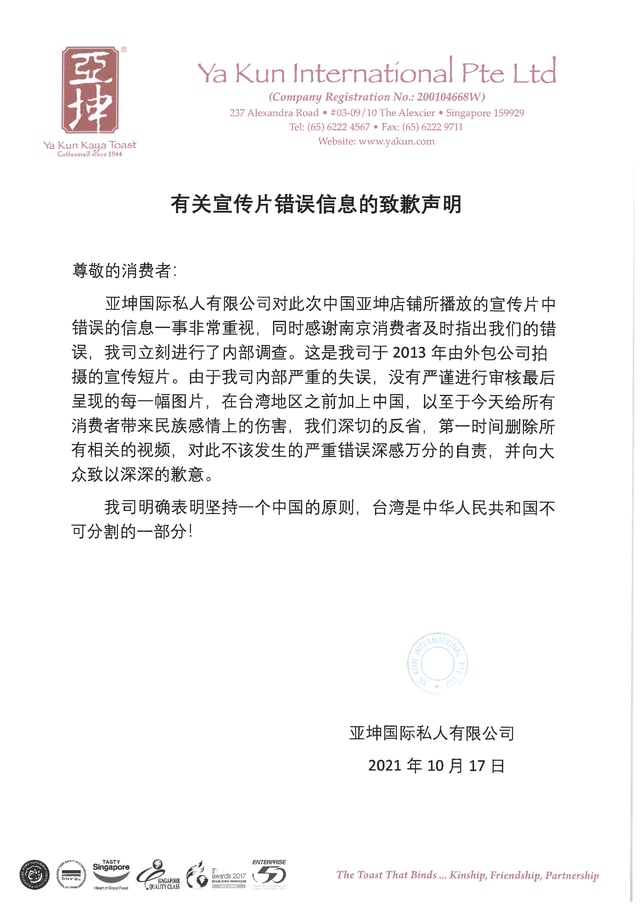 The company said that after conducting "internal investigations", they found out that the production of the promotional material was outsourced to another company.

Ya Kun further said that they did not "strictly review every image", and apologised for "causing harm to their consumers' national sentiment".

The company added that they were "deeply remorseful over the severe mistake that should not have happened", and have removed those promotional materials "immediately".

They reiterated they they stand for Beijing's "one China principle" as well, and ended the statement by saying, "Taiwan is an inalienable part of the People's Republic of China!"

Not the first brand to get flamed over Taiwan

Ya Kun is not the first foreign brand that was flamed by Chinese netizens over Taiwan's status.

In December last year, Chinese netizens called for popular South Korean reality game show Running Man to be boycotted, after the show displayed Taiwan's flag beside China's, which suggested the two were equal in status.

In 2018, three airlines -- American Airlines, Delta Air Lines, and United Airlines -- gave in to the Chinese government's sanction threats and removed any mention of Taiwan on their website, CNN reported.

United Airlines even reportedly removed references to TW, which is short for Taiwan.