In the past week, members of the public have begun to scrutinise and criticise the anonymous @sgcickenrice on Instagram.

Once a voice for the disenfranchised, the account found itself in hot water two days ago (Oct. 27), after announcing that it would no longer be commenting on the Night Owl Cinematics (NOC) saga. 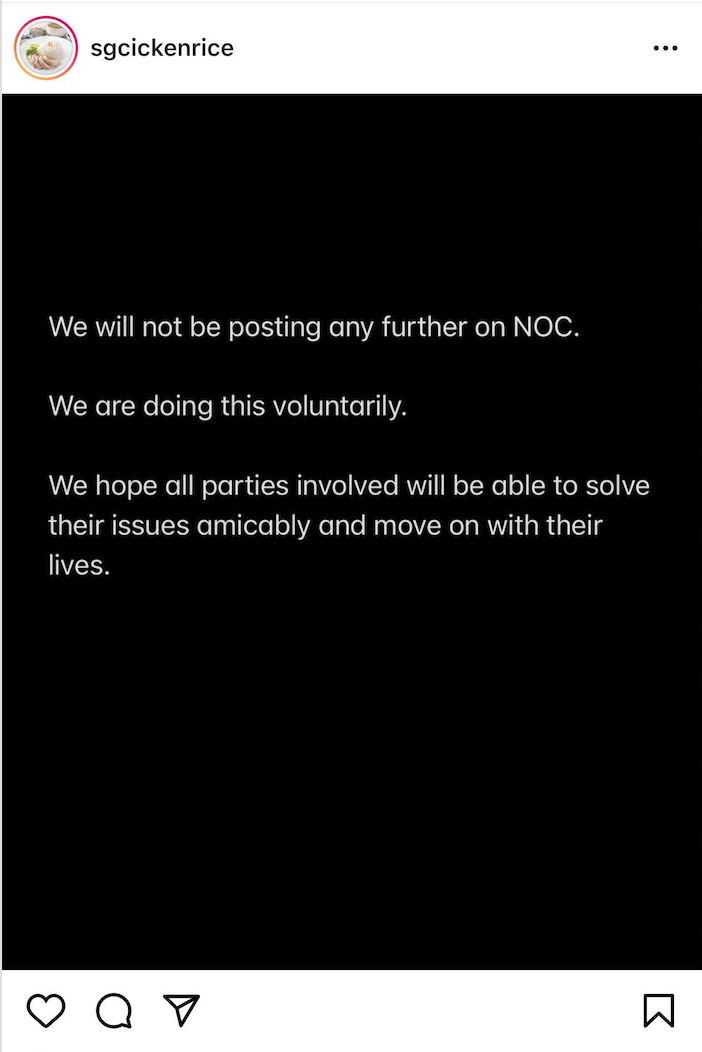 Being the one who started the saga, of course, the move did not sit right with the crowd—especially when it came at a juncture where NOC co-founder Sylvia Chan, the key figure whom all the damning and potentially defamatory accusations were being thrown at, had just sat through a tell-all interview with no-longer-pink-haired influencer Xiaxue.

In the interview, Chan had provided details of her relationship with ex-husband and co-founder Ryan Tan, alleging infidelity and emotional/psychological manipulation on his part throughout their 10-year marriage.

Followers called out @sgcickenrice's hypocrisy and double standards, as it demanded accountability from Chan but not from Tan. 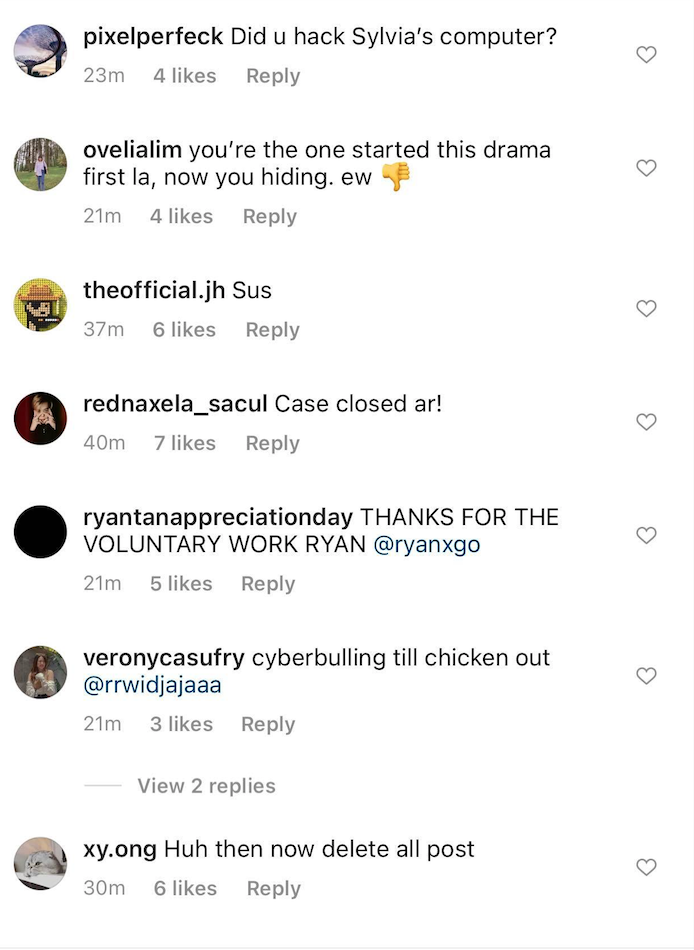 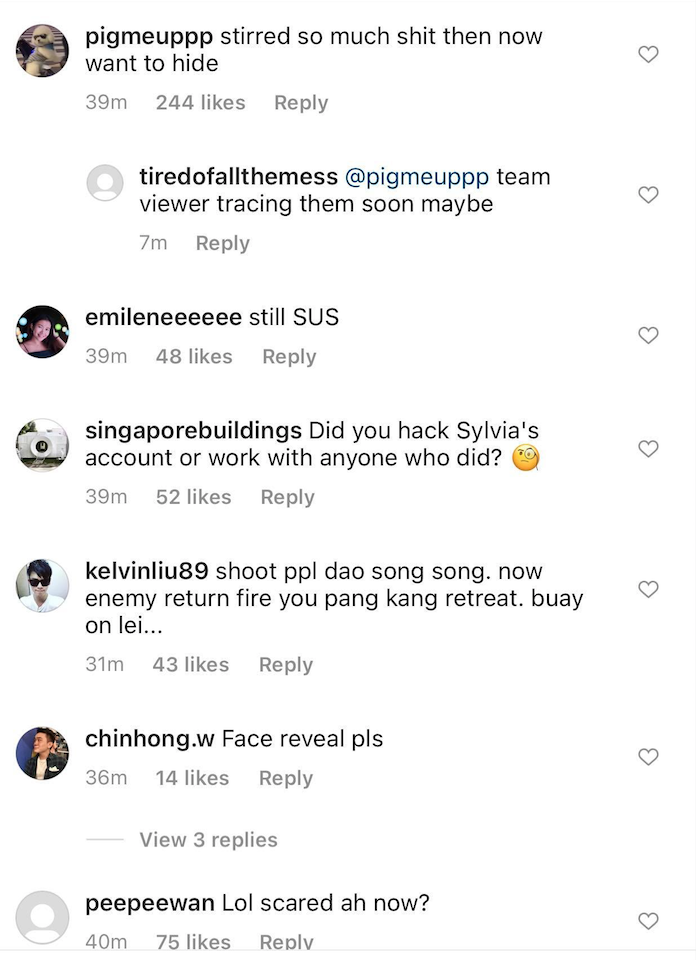 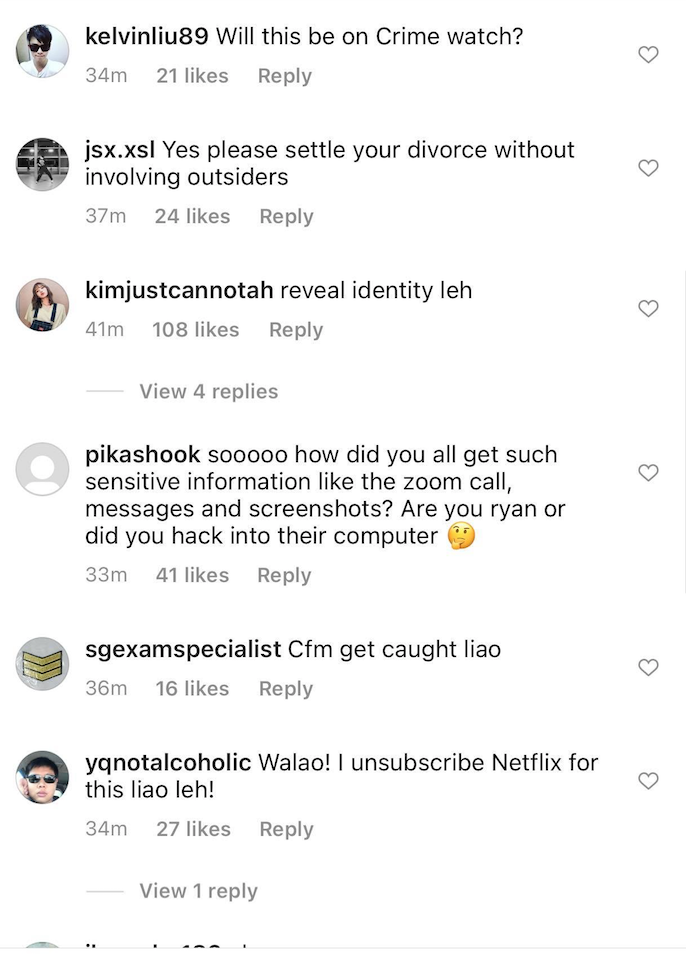 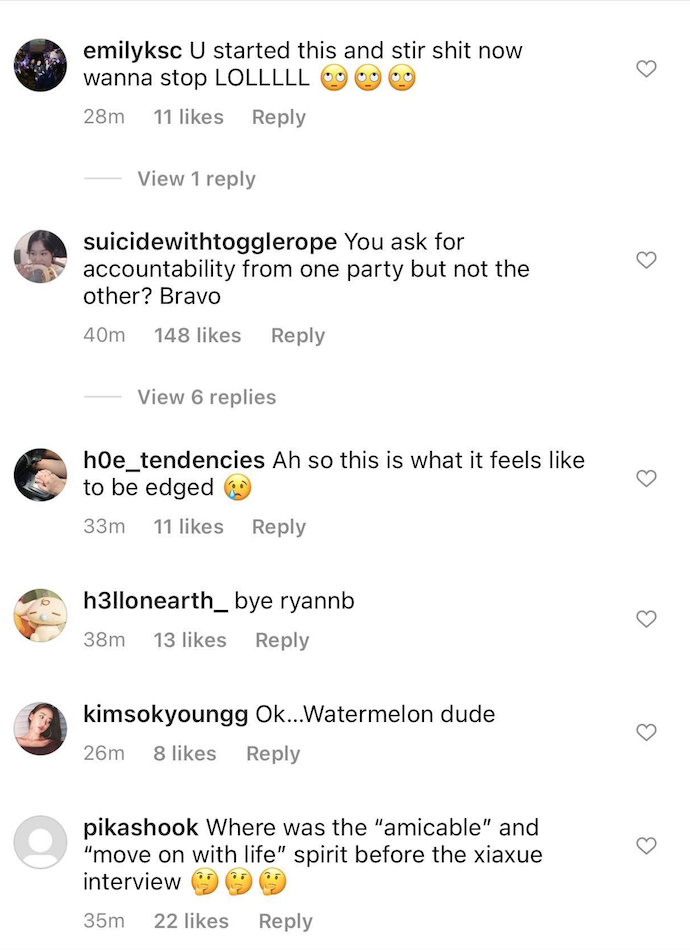 Somewhere from the gutters, Dee Kosh made himself heard as well.

The shift in the narrative was further compounded by a loaded TikTok from Xiaxue on the morning of Oct. 29.

The influencer started her five-minute clip bashing anonymous accounts who do not have to face the consequences of their words.

One succinct term that she used to describe such users is "power tripping assholes with a god complex" who relish in their online fame.

"With regards to sgcickenrice, I don't know who's behind it, but I do have some stuff to show you guys," she said.

Xiaxue then presented a series of facts that point to one person: user @baerendang.

For those who came in late: before @sgcickenrice, there existed a TikTok account that also published dirt on NOC. Both accounts are manned by the same person(s).

Xiaxue pointed out that initial screenshots posted to the TikTok account featured @baerendang's profile as the user, although this was quickly removed. 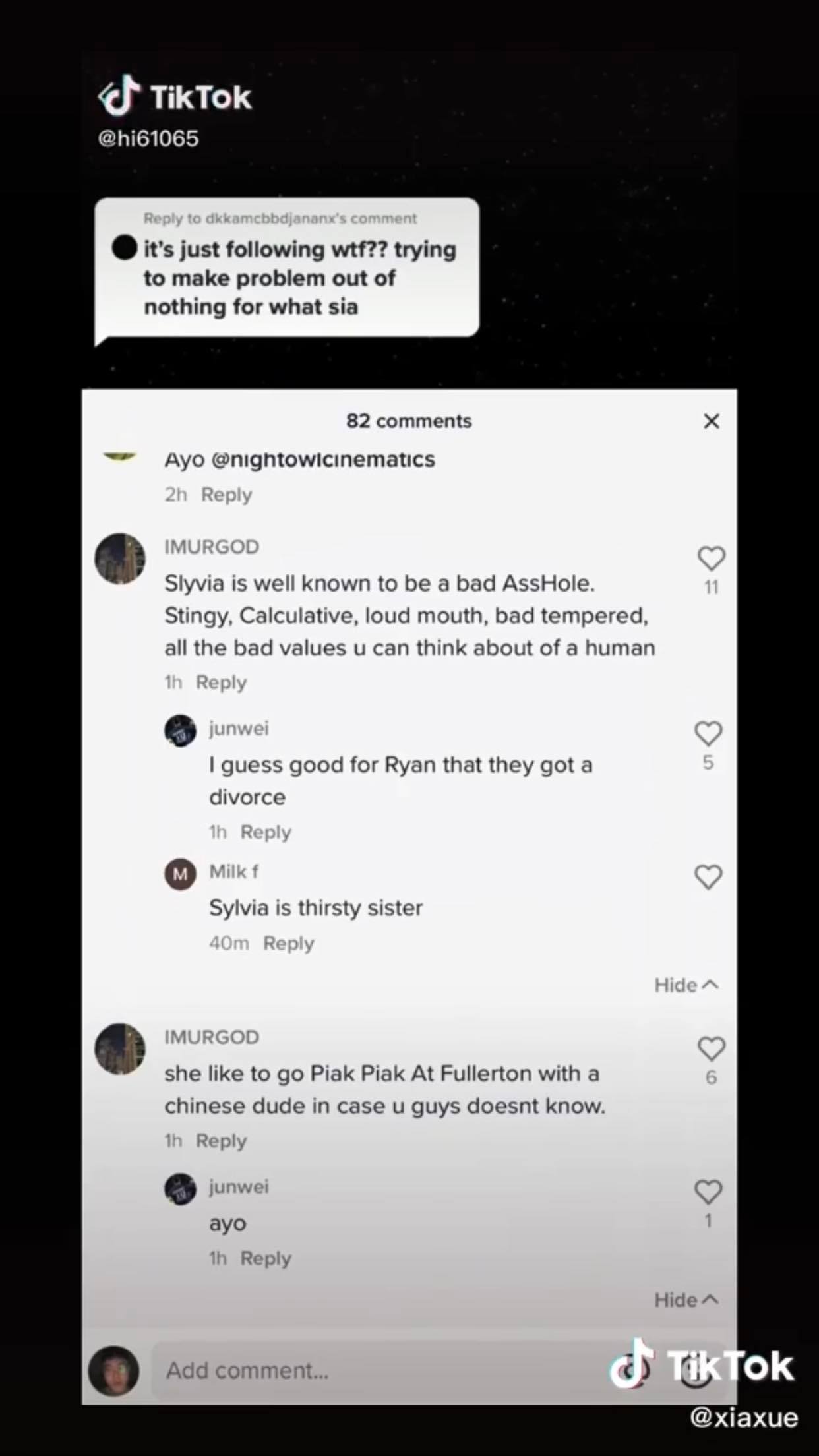 The content was then reposted with @baerendang's's photo cropped out... but not before screenshots were taken.

Xiaxue revealed that she has actually met @baerendang on a shoot for —you've guessed it—NOC. 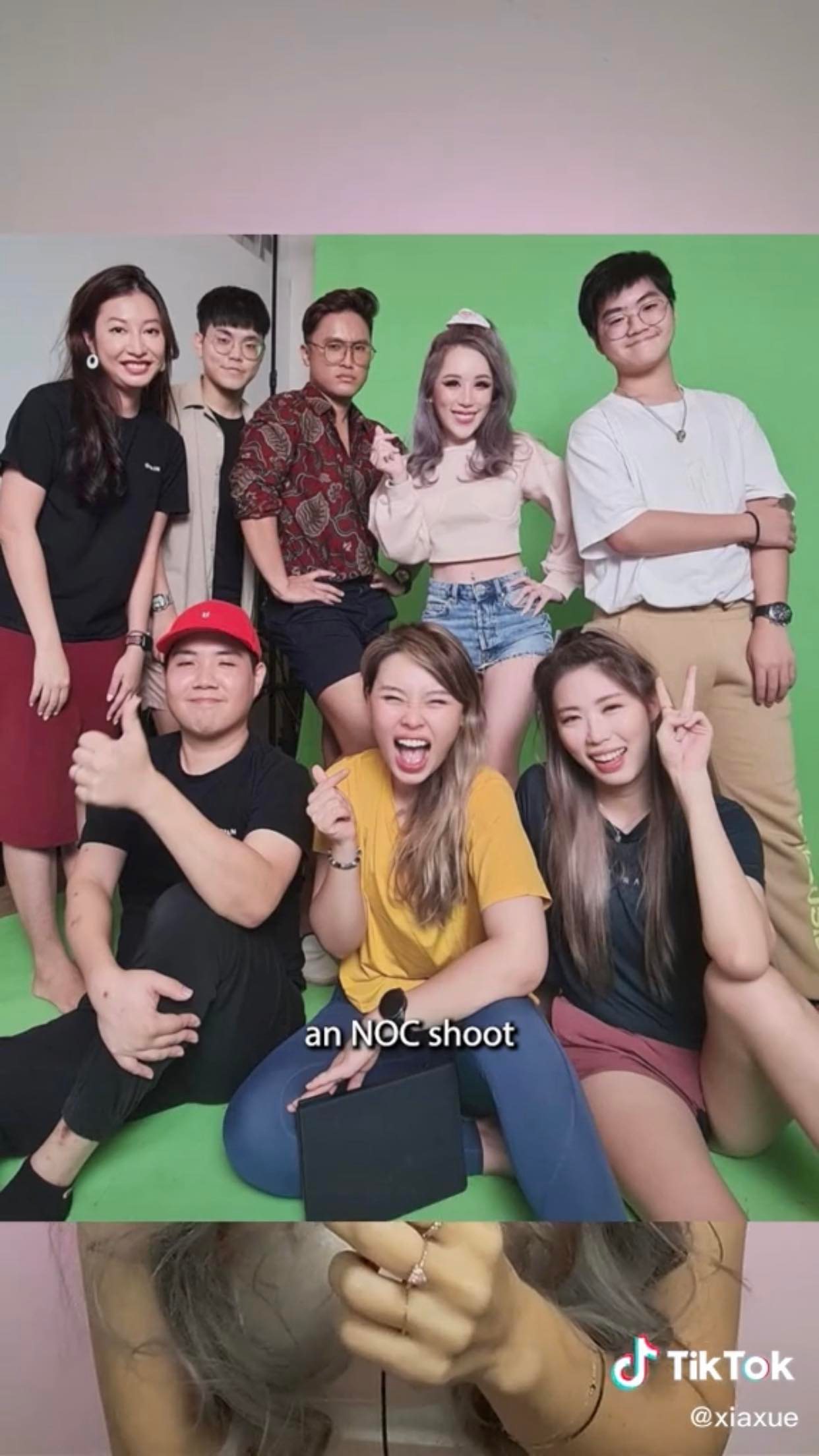 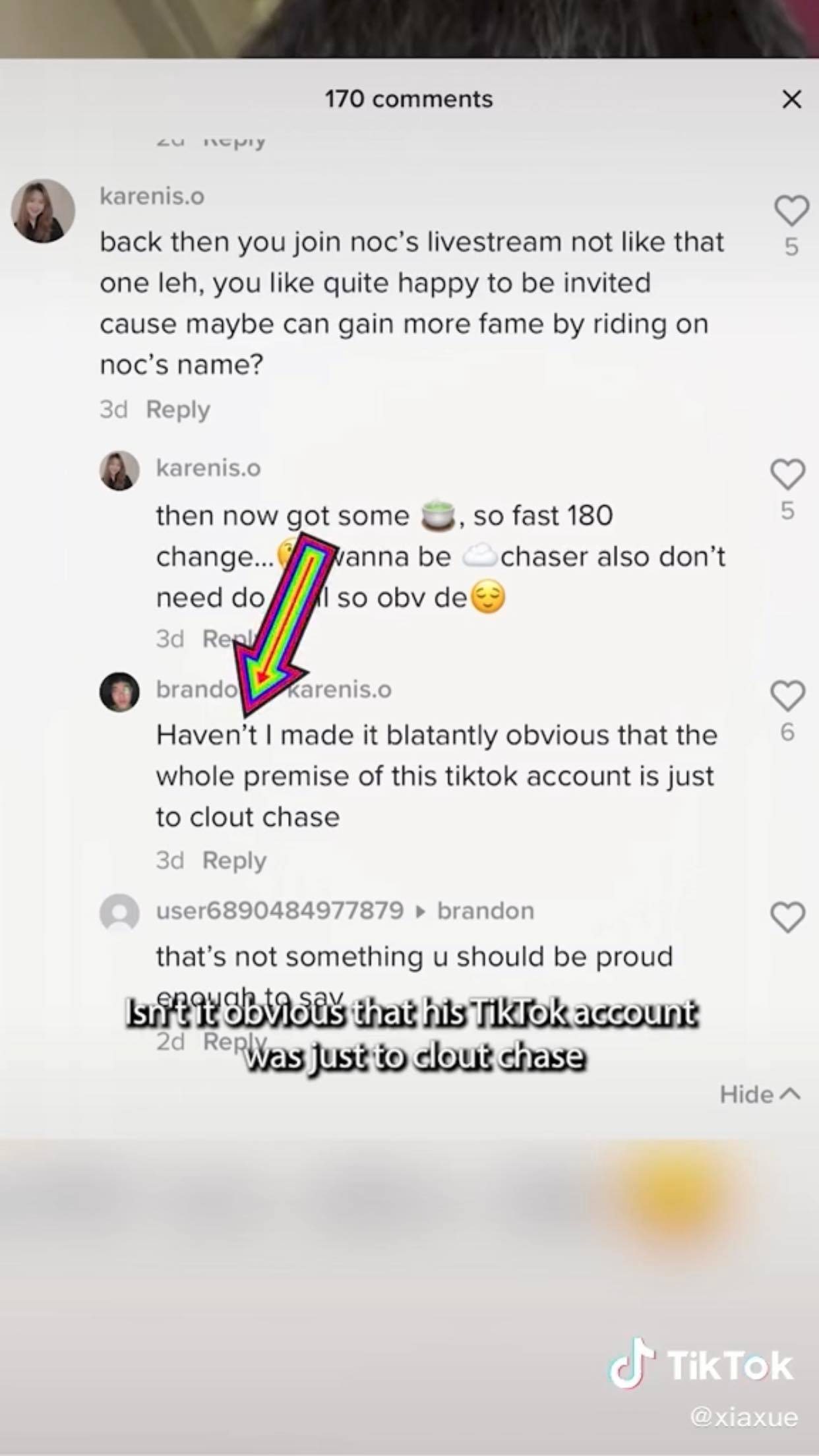 @baerendang is also known to be close to former NOC talent Nicole Liel, with the two hosting a weekly podcast together.

Liel, in turn, is friends with Isabelle and Samantha, both of whom also worked at NOC, and who have had their scrapes with (Sylvia) Chan.

Comparisons were drawn between @baerendang and @sgcickenrice, where Xiaxue uncovered that both accounts were fond of using the word "bussin", a Gen Z slang to indicate when something is really good. 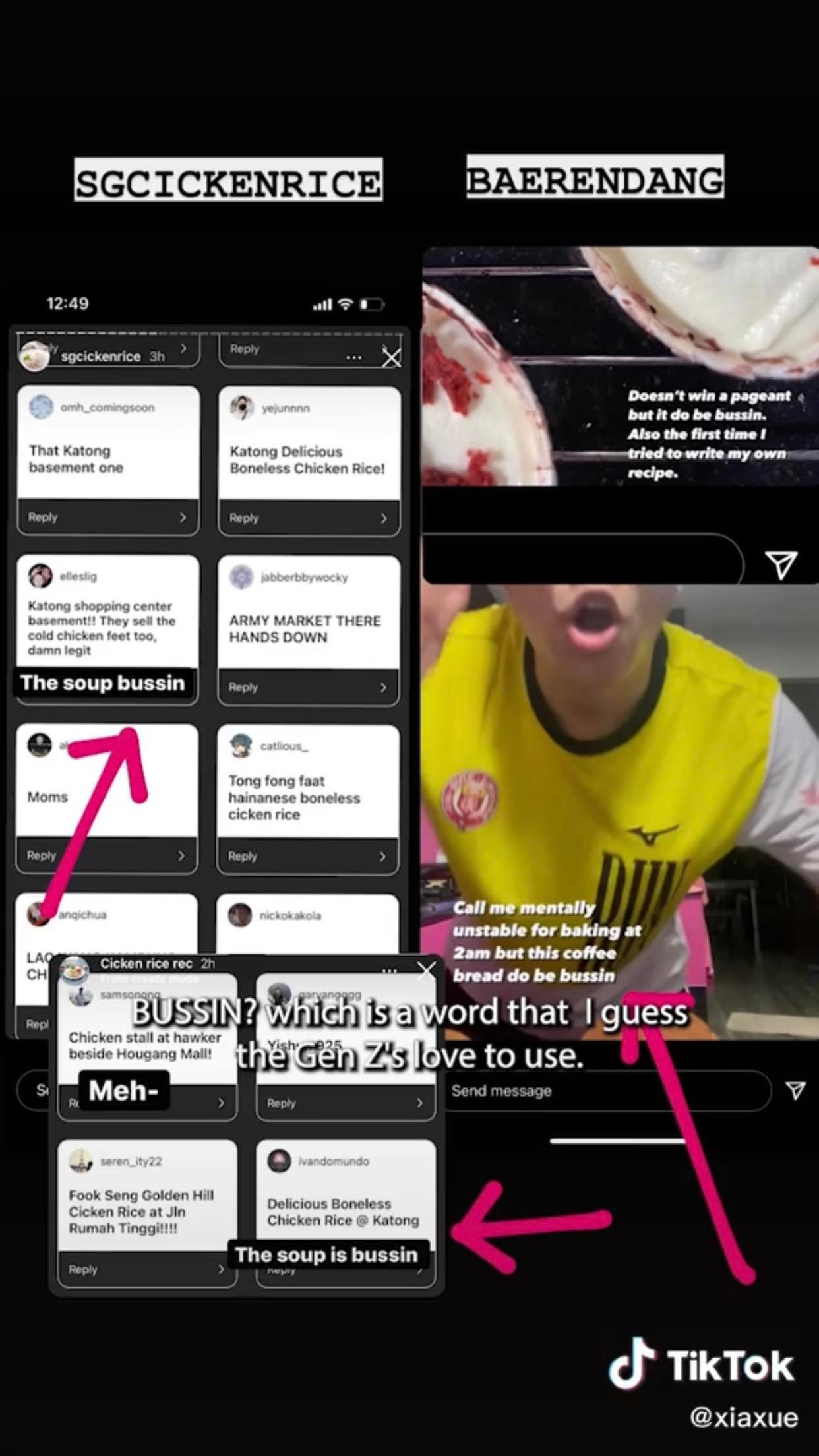 Going by his previous posts, @baerendang apparently loves chicken rice as well (like the actual dish). 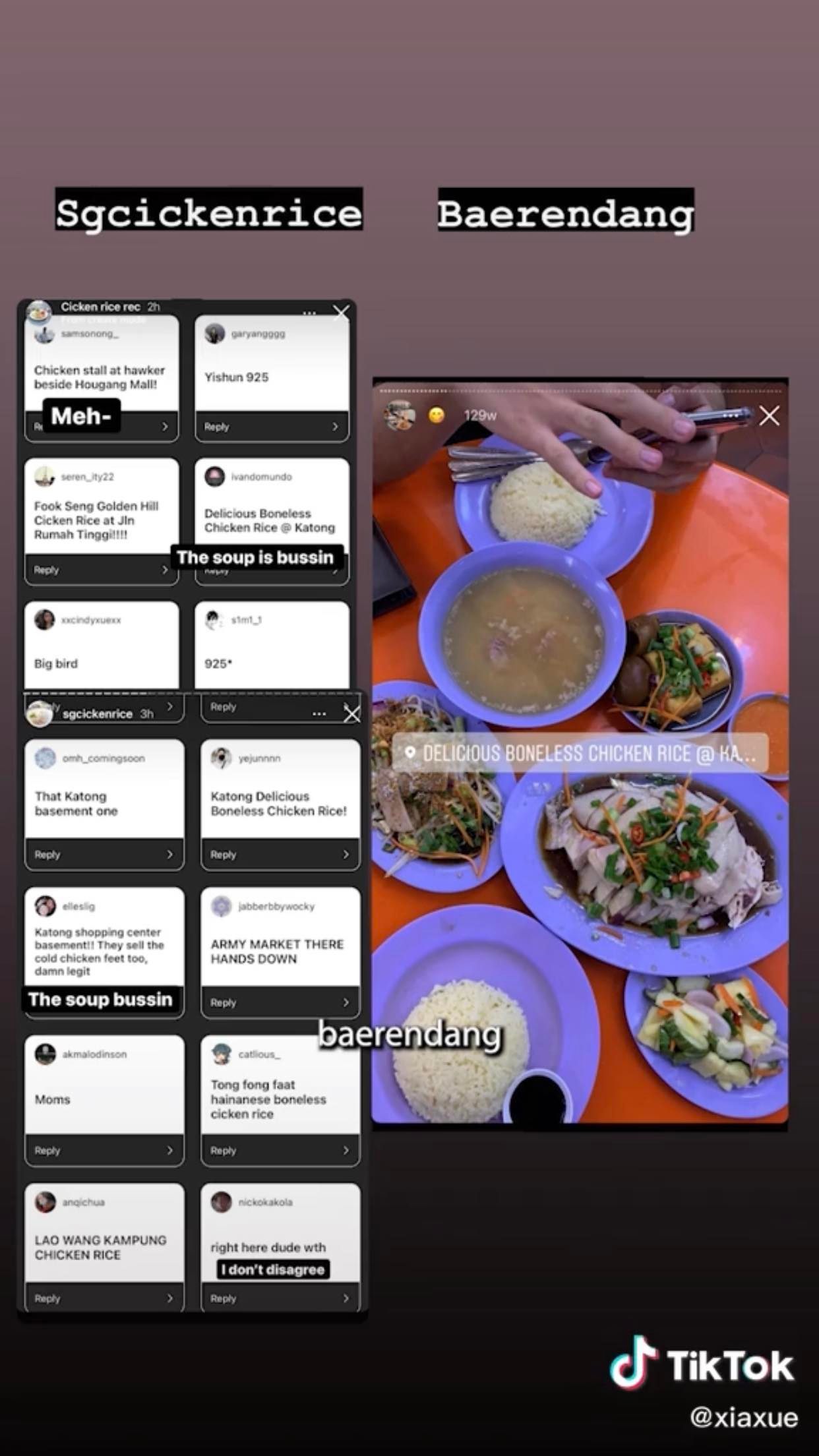 Since the saga exploded in early October, @baerendang has posted several pieces of content mocking Chan. 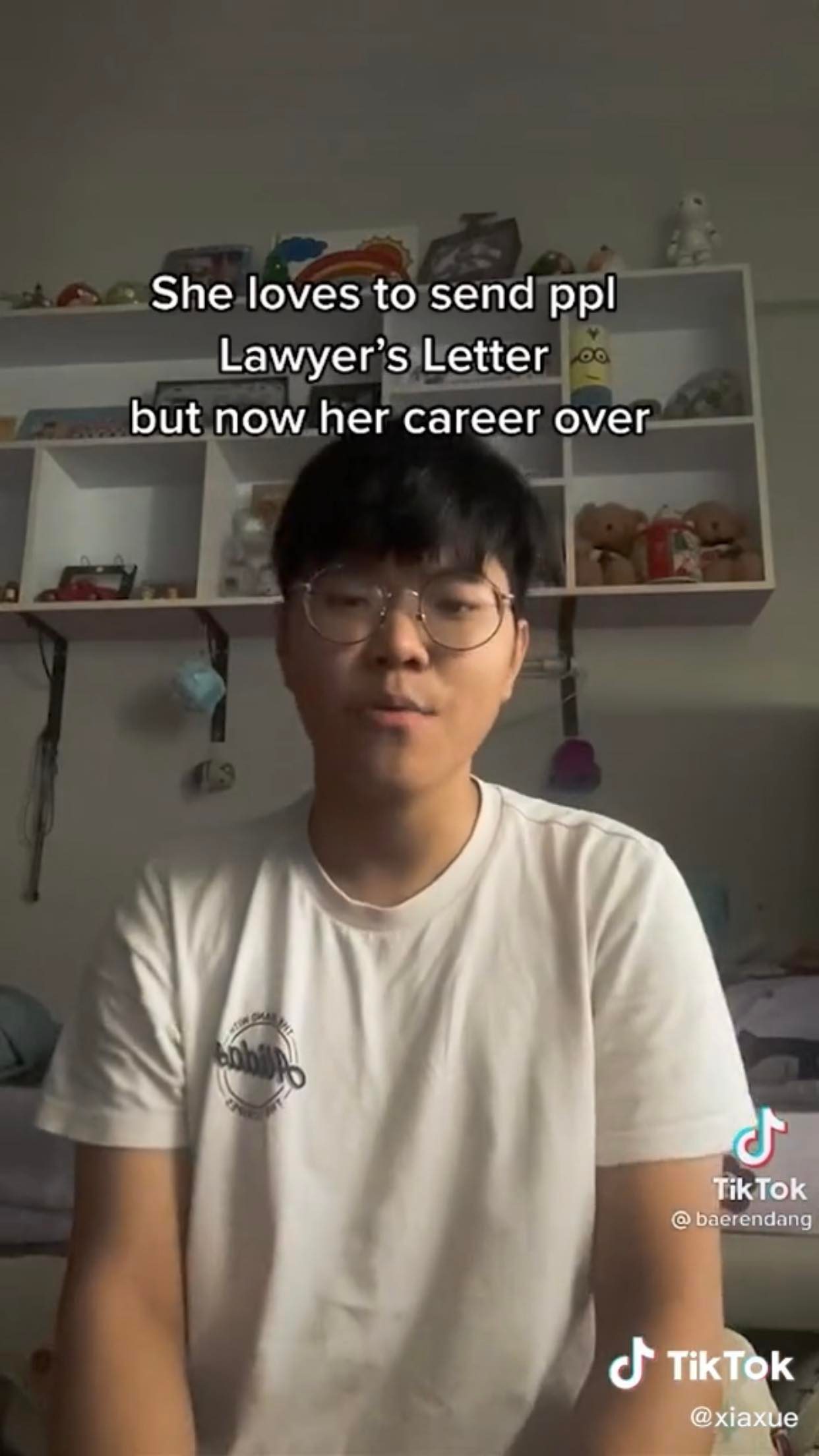 Xiaxue noted that @baerendang took down his content when @sgcickenrice removed their posts.

"Maybe they all decided to be kind? At the same time?" Xiaxue posed.

In response to queries from Mothership, @baerendang responded with a lengthy statement on his point of view.

You can read it in full here:

I am Brandon, a 20-year-old student. I am the admin of SGCICKENRICE.

I am flooded with questions and, inevitably, accusations. I will address them now to the best of my abilities.

I started this page sometime around September 2021 when I witnessed how my friends, who are employees of NOC, were treated. Although I was not an employee of NOC, I was privy to their grievances. Out of curiosity, I then went to check NOC's glass door page. When I saw their glassdoor page, I realised that these issues were not unique to what my friends were facing but has been happening for years on end.

I felt a moral obligation to speak up and shed light on these issues that have plagued employees. And so I did. For those of you who have followed the page from the start, you would note that the only “side” the page was on is that of the employees. The page went after Ryan and Sylvia to demand accountability. If you see Ryan’s older posts, you will see our comments there.

The goal was simple – to demand fair wages, timely payment, and equitable treatment. There were no “camps”, but only employees to support.

Along the way, things got messy. Without going into details and to put it simply, I found myself becoming a pawn. Many, including myself, were taken for a ride. I believe Preetipls put it best when she said that all the rest of us are mere “collateral damage” in fight over assets that involve 2 powerful and rich adults.

It is a fight over assets, plain and simple. For these folks, the platforms, the pages, and even the talents, are all assets. When you see things through that lens, it all becomes clear. There are no heros (sic) in this story.

As soon as I saw that, I started to have serious reservations. I began to doubt some of the narratives I was fed. Soon after, I pulled out as I felt the focus and diverted completely away from what should have been the main issue.

To cut the long story short, I apologise for my naivete and my admittedly misguided ways. I will take all the criticisms and pitchforks, but all I ask for is for the employees to be spared. I take full responsibility for the actions of the page. To avoid doubt, there was no “hacking” or access to information on our end. Whatever I received and saw was released to the public at the same time.

However, there is one thing I will not apologise for. I will not apologise for speaking up and raising issues relating to the plight of the employees of NOC. I believe this was the central focus of the initial issues. These are also issues that both Ryan and Sylvia have yet to answer for, and it is my firm belief that both parties are responsible for this state of affairs.

Throughout the course of running this page, I realised that the issues faced by NOC staff are, unfortunately, not uncommon in Singapore. Many of you have DMed us to share your experiences with workplace issues and less than ideal bosses. It is my hope that all of us have courage to demand better for ourselves and upend the toxic norms that permeate many aspects of Singapore’s work culture. All of us have a duty and moral obligation to speak up, even if it may not affect us personally.

We do not need to look outwards for heros (sic), and we should not put people on a pedestal. I think this is something I learnt the hard way.

I understand and totally expect a lot of hate to come my way over the next couple of days. I will not shy away from responsibility. All that I ask for is that you also keep in mind the plight of the employees, and help, in whatever way you can, to demand justice and accountability from all parties involved.

However, Brandon did not address Mothership’s questions on whether other individuals from NOC were involved in the setting up of the account.

At time of writing, the account @sgcickenrice is still up with over 60,000 followers. There is no mention of whether it will be deleted.

[Update on Oct. 29, 4:05pm: The handle @sgcickenrice is no longer available. The account has since been renamed to something after Brandon's own name. Brandon has also supplemented his statement with an Instagram Story.] 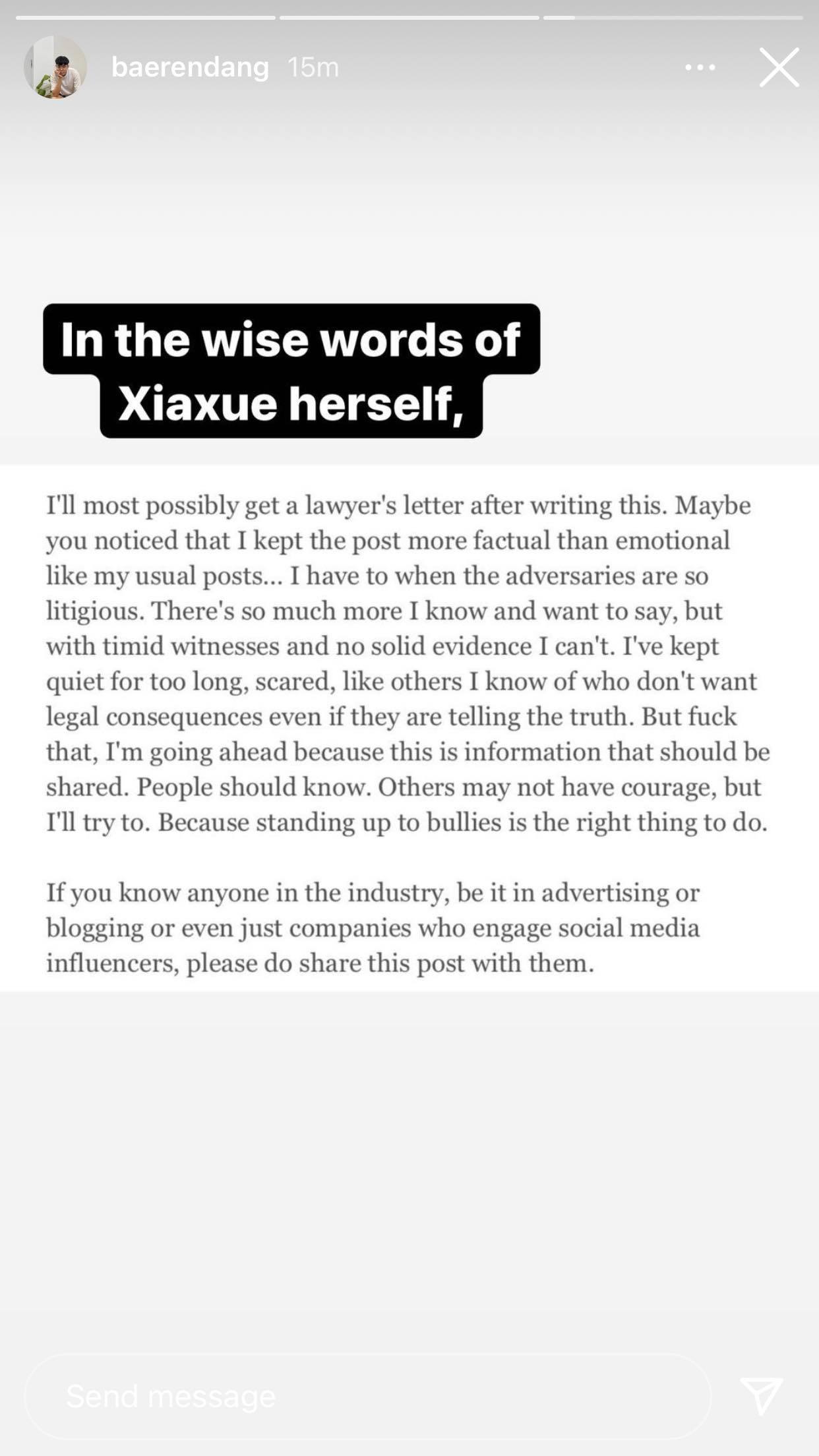