On Oct. 9, the Multi-Ministry Taskforce announced that the new vaccination-differentiated safe management measures (VDS) in Singapore will preliminarily kick in on Wednesday, Oct. 13.

Mothership hit the streets to sample how various establishments were coping in the eastern part of Singapore.

Here's how it went.

When Mothership visited the Parkway Parade shopping mall on Oct. 13 afternoon, some TraceTogether ambassadors were already checking the vaccination status of patrons at entry points into the mall. 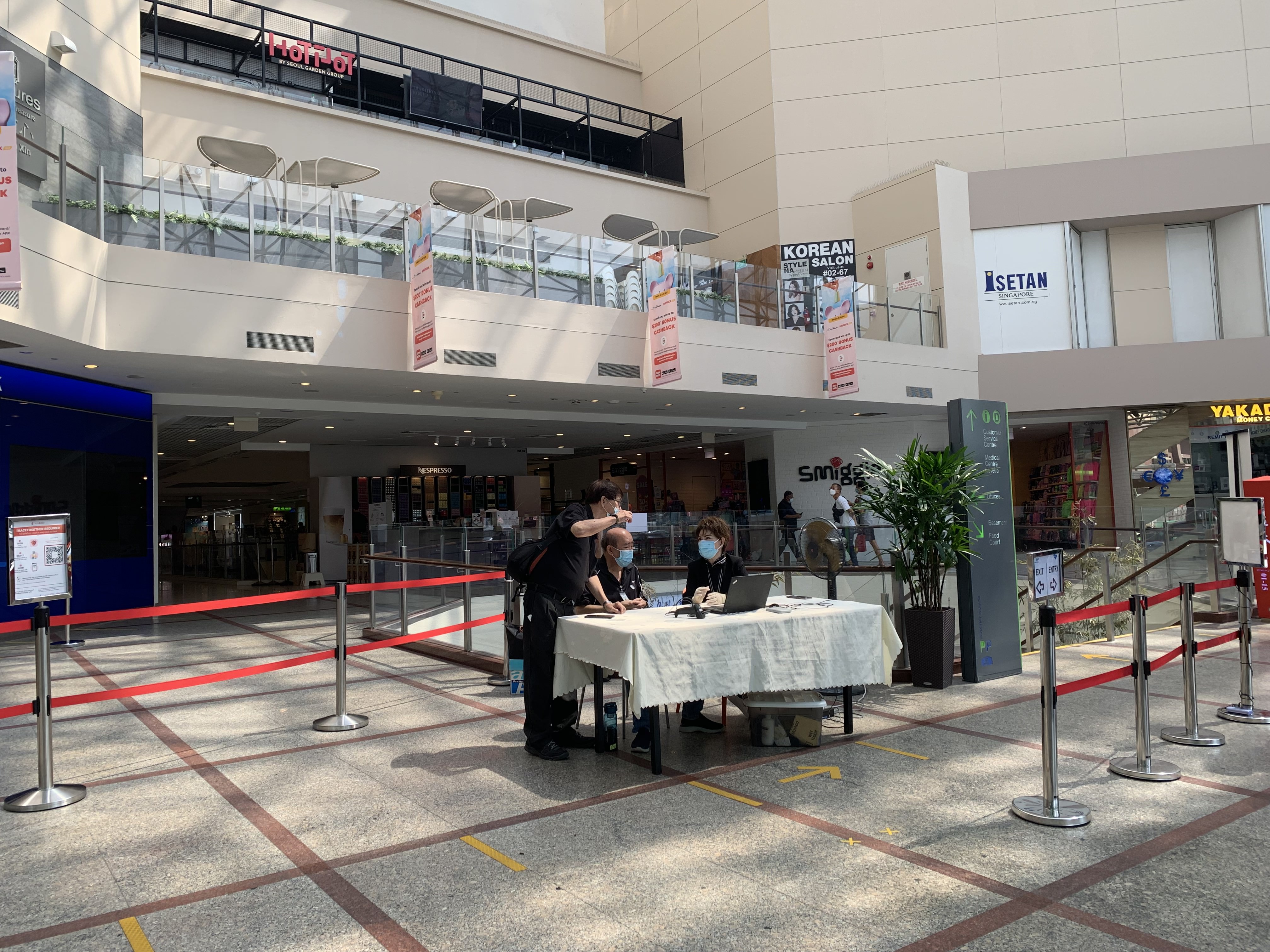 Speaking to Mothership, Teo, 67, who works as a TraceTogether ambassador, shared that he has been very busy since the new measures kicked in

He added that he remains "very confused" about the new measures, as the mall management was still scrambling to put in place new procedures, such as the SafeEntry Business app, to cope with the changes.

As a result, they have had to improvise by using the SafeEntry Business app on their phones, as an interim measure.

However, in accordance with the new rules, which state that unvaccinated persons are not allowed to enter malls and attractions from Oct. 19 after a one-week grace period, Teo shared that he has already begun turning away unvaccinated patrons.

The exception was to still allow in unvaccinated persons who say they're going to the mall for childcare or medical services, children aged 12 years and below, or those partially vaccinated.

Teo added that he was abiding by the one-week grace period from Oct. 13 to Oct. 19, to allow malls and members of the public to adapt to the new measures.

Within the Parkway Parade shopping mall itself, further checkpoints appeared to depend on the stores visited.

For example, a secondary TraceTogether checkpoint was implemented for the Food Republic food court located at the mall's basement. 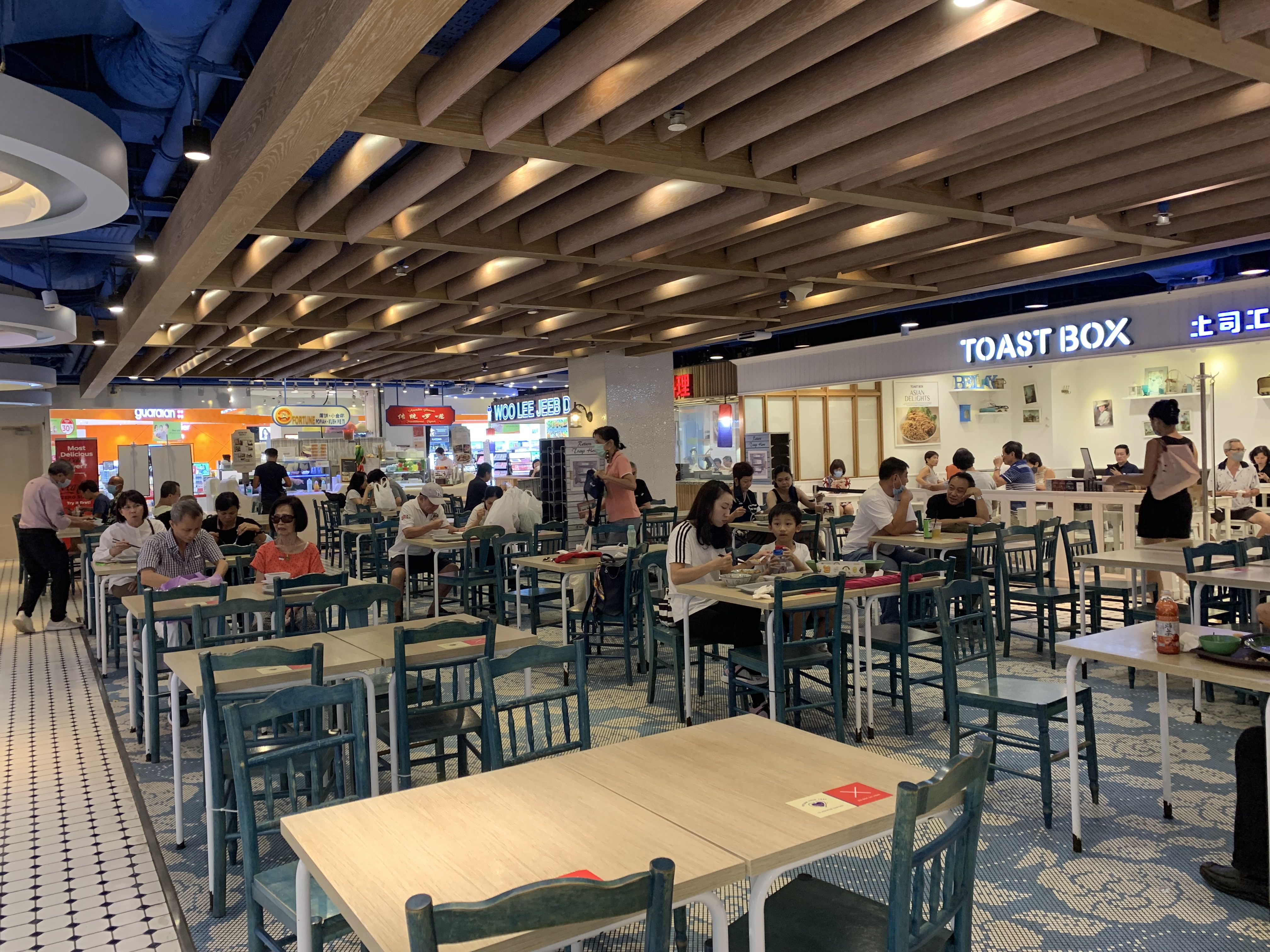 Shafia, 32, another TraceTogether ambassador, shared that this was because the mall management had told them that there was a need for a checkpoint for the food court, at least for now.

A sticker would be given to individuals who are fully vaccinated, so that stall operators in the food court can easily identify unvaccinated persons and remind them to only purchase takeaway food.

Unvaccinated workers within the mall were also asked to takeaway their food, and would typically eat in their stores, explained Shafia.

Some shops no checks

Walking into an optometry shop was a different matter, however. No checks were conducted, as Lee, the owner of the store, said that things have been normal, and that business was quiet.

He added that he will thus rely on TraceTogether ambassadors at entry checkpoints, to check for the vaccination status of mall patrons.

No more unvaxxed halls for this operator

At the Cathay Cineplex cinemas, more stringent rules were implemented, with only fully vaccinated halls available for movie-goers. 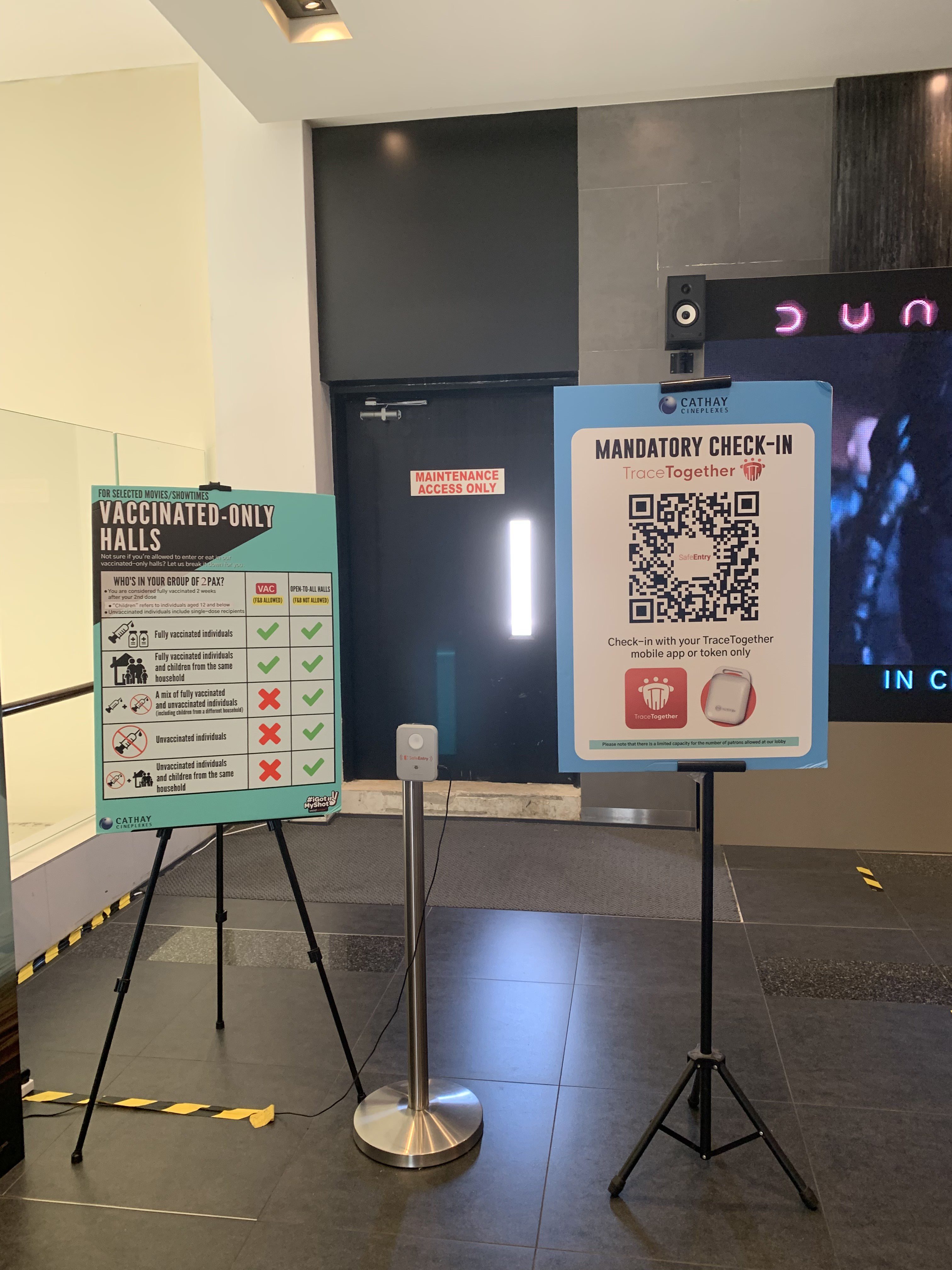 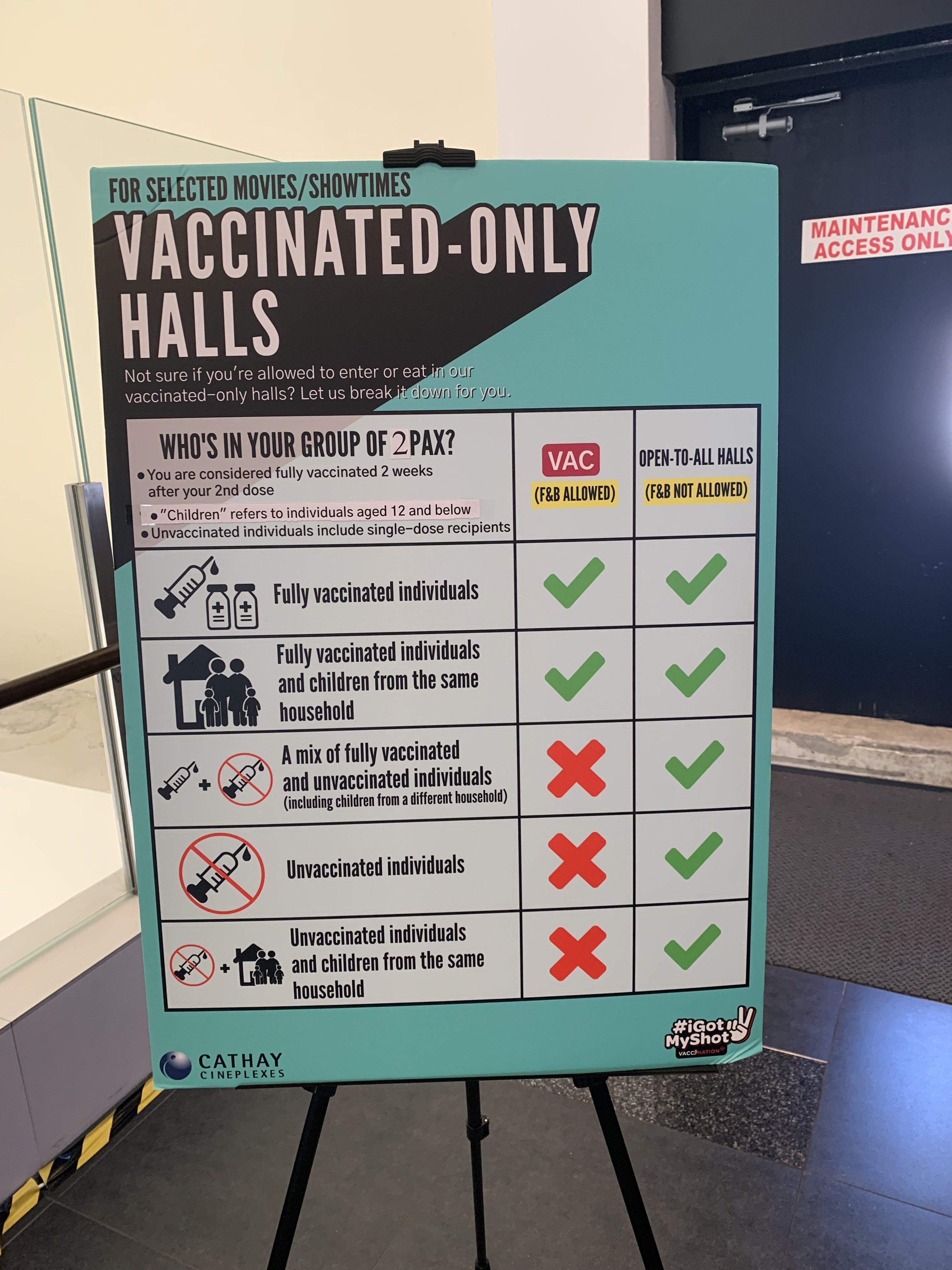 Speaking to Mothership, Karen, 22, who works as a manager, confirmed that from Oct. 13, unvaccinated halls have been removed as an option at Cathay, in line with new regulations.

However, an exception would be made for children aged 12 years and below: "As long as they are with their parents or any adult who is fully vaccinated, they can go in."

At the Marine Parade Central Market and Food Centre, things were also different.

The hawker centre was relatively empty, with multiple TraceTogether ambassadors seen manning the entry points into the venue.

Orange plastic webbing was put up as a fence to keep patrons streaming in and out at specific entrances and exits, but the checking of one's vaccination status was not yet a mandatory affair. 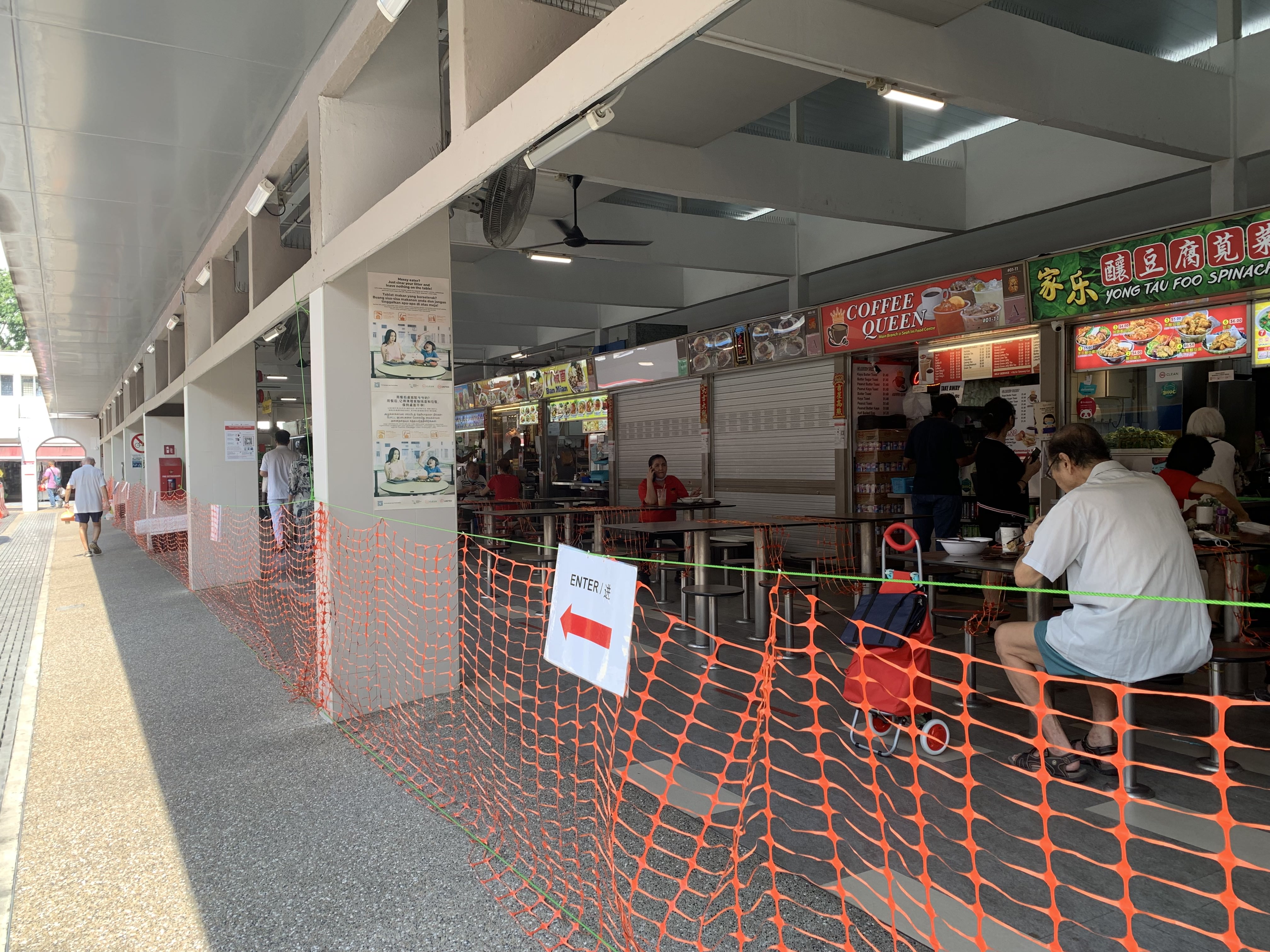 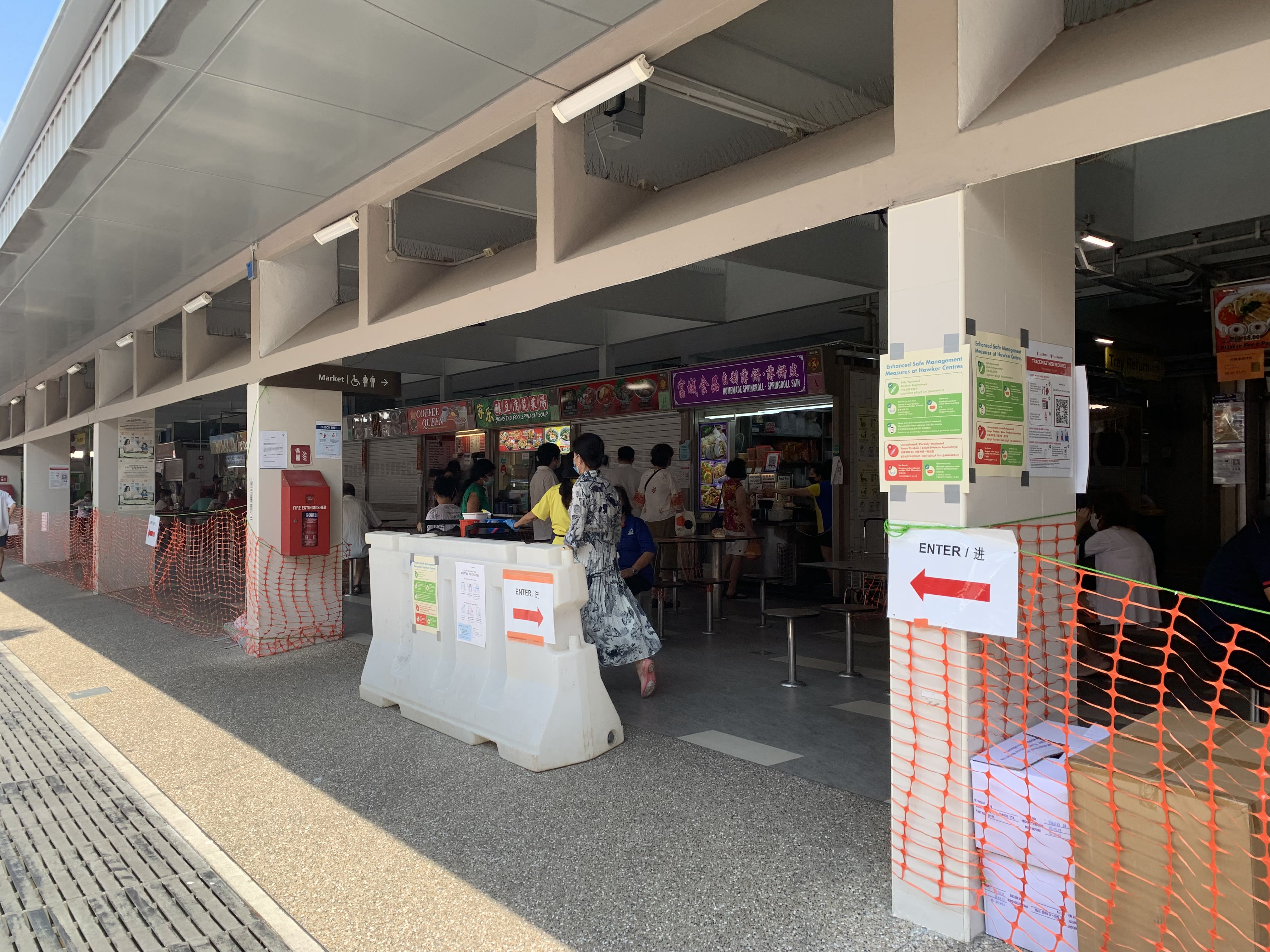 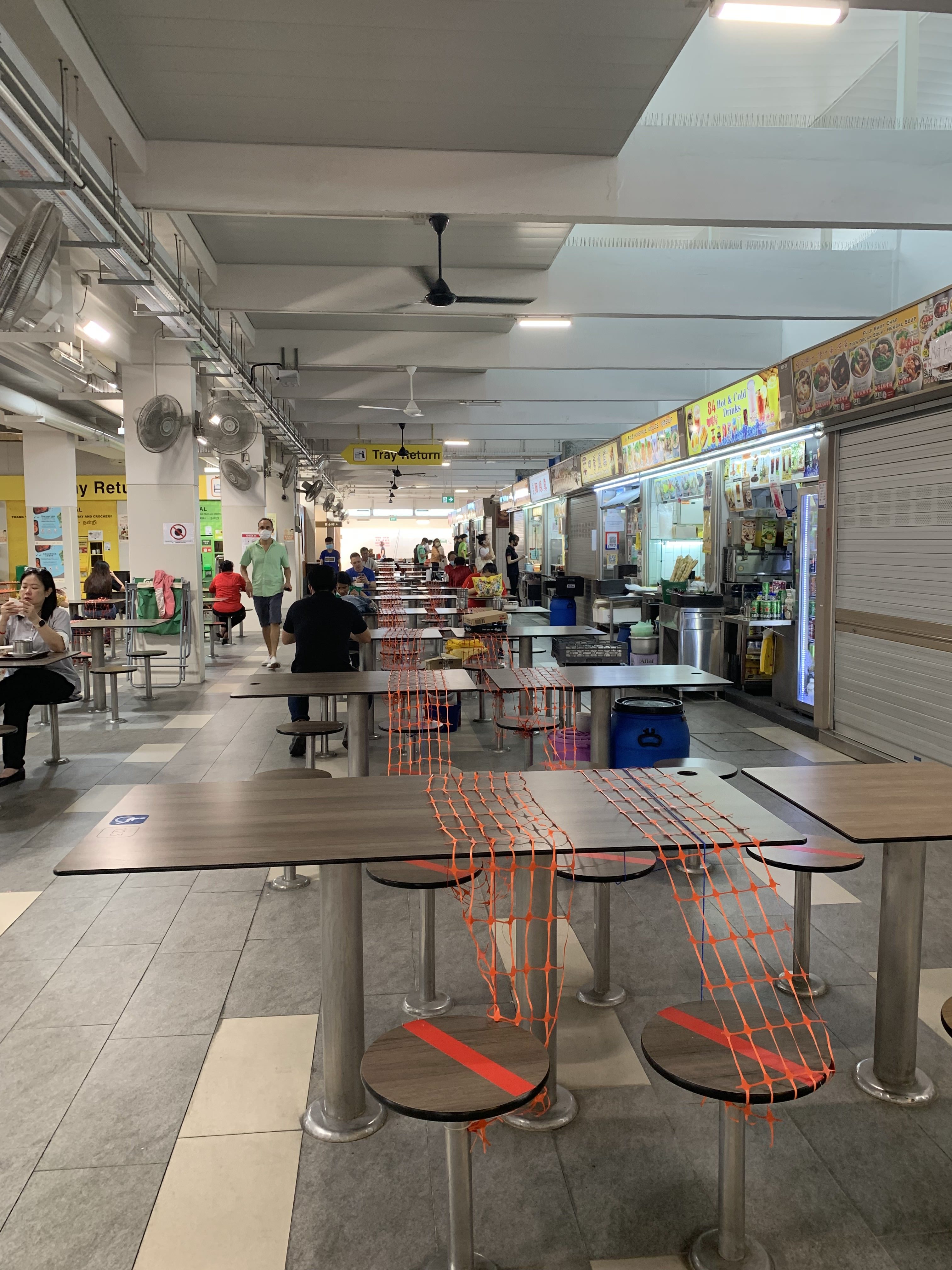 Scanning of TraceTogether-SafeEntry was still necessary, however, and ambassadors would approach customers who didn't check in.

One stall owner located within the hawker centre said he felt that coffee shops actually had it worse in this aspect, with regards to the enforcing the new VDS rules.

He opined in Chinese: "We're okay. We have people manning the entry points at hawker centres, but at coffee shops, the people at the stalls have to check for vaccination status too. More troublesome."

"Inconvenient" to go for services in malls

As preliminary vaccination-differentiated measures began, one 66-year-old unvaccinated person told Mothership the difficulties she has been facing because she is unvaccinated.

She said: "I think it's very inconvenient for me, because when I go to the mall, I want to go to the bank. Sometimes the supermarket. Usually is banking matters because some of the transaction cannot do online."

The woman, who declined to be named, added that she's medically ineligible for vaccination, including for the vaccines under the Pandemic Special Access Route (PSAR).

In her opinion, more room should be given for those who cannot get vaccinated.

She added: "It's not that I don't want to get vaccinated, but I cannot."

However, she also said that instructions from authorities have been clear.