An accident occurred recently in Balestier on Oct. 22 in the afternoon, sparking a small debate in the comments section about who was in the wrong.

Ahead, a Tesla Model 3 was seen making a right turn onto the road.

The first car then collides into it.

The impact even causes the dashcam to dislodge from its mount.

The dashcam car bore the brunt of the impact on its bonnet.

The Tesla also sports dents on its passenger and back doors.

The video led to some discussion among commenters, with opinions divided as to who was at fault for the accident.

A large group of Facebook users blamed the car with the dashcam for lack of vigilance and failing to brake in time.

Other added that he was driving too fast despite the "SLOW" markings on the road.

Another group of commenters defended the dashcam car, pointing out that it had the right of way, and highlighting that there was simply not enough time for the car to slow down to a complete stop without hitting the Tesla. 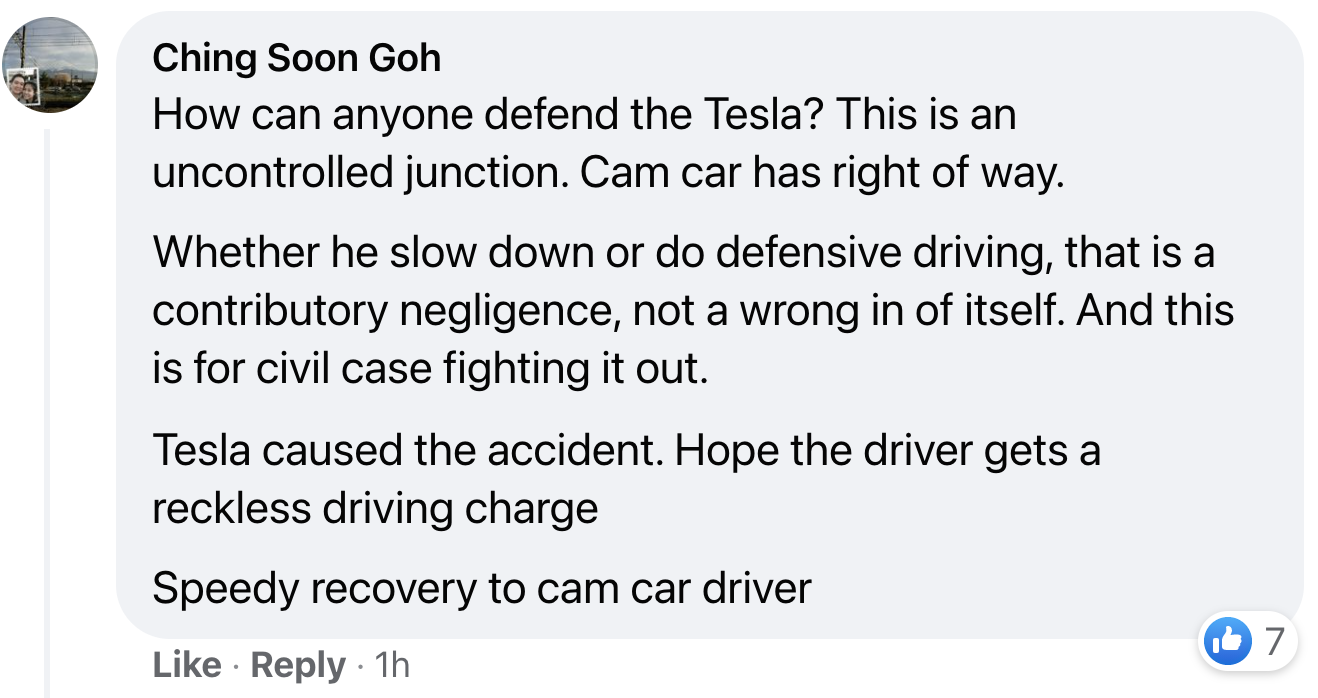 Other commenters however, went down a completely different track, taking note of the Tesla's superior workmanship.

Tesla vehicles touted to be safest cars ever

Tesla cars are touted to be the "safest cars in the world", and the Model 3 in particular, is reported to have the lowest probability of injury out of all the cars tested by the U.S.'s National Highway Traffic Safety Administration (NHTSA).

This is attributed to the car's heaviest components being located closer to its centre of gravity.

Along with a strong, rigid passenger compartment and fortified battery pack, these factors are said to "help to prevent intrusion into the cabin and battery modules, reduce rollover risk, and distribute crash forces systematically away from the cabin."

According to Tesla, their cars also has a front crumple zone which is optimised to absorb energy and crush more efficiently.

There have however, been issues with Tesla's self-driving capabilities. As of Sep. 1, U.S. auto safety regulators have identified 12 accidents involving Tesla vehicles using the autopilot system according to Reuters.

The NHTAS previously said it had opened a formal safety probe into Tesla driver assistance system Autopilot after 11 crashes, one of which was fatal.

Tesla's investigations subsequently revealed that a driver was actually behind the wheel before the accident that claimed his life.