Taxes: The one thing said to be as certain as death.

Tax-filing season isn't here yet (it starts in April) but if you want to cut back on the amount of income tax you pay, then you should start planning now because of a little something called income tax deductions.

Income tax deductions are handed out in the form of reliefs and rebates and simply put, they help you to reduce the amount income to be taxed. You have until Dec. 31, 2021 to get them in order if you want to claim them during the next tax filing season in 2022.

According the Inland Revenue Authority of Singapore (IRAS), tax deduction is a tool used to "encourage social and economic objectives such as filial piety, family formation and the advancement of skills".

How to calculate your income tax

But before we get to the various tax deductions, here's a primer on how your income tax is calculated.

For starters, those who earn S$22,000 or less annually don't need to pay income tax.

Those who earn more than S$22,000 will have to pay income tax of between two and 22 per cent, depending on their income.

Take a look at the table below.

Look for the row where the sum of "First S$X" and "Next S$X"  just exceeds your annual income, then go to the row before that.

Take the remaining amount and multiply it by the income tax rate.

Add this amount to the gross tax payable from earlier to get your income tax amount. 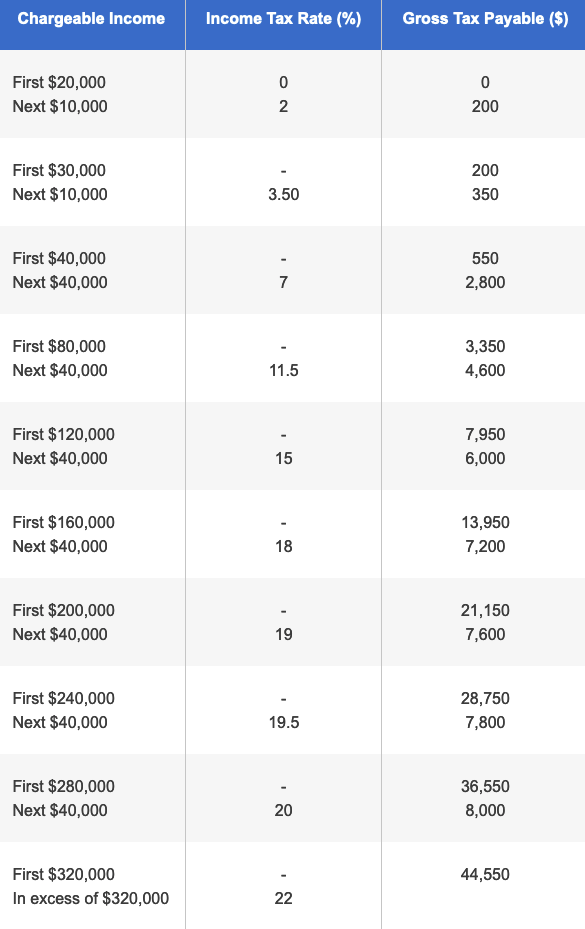 As you can see from the chart above, the tax rates differ according to different income levels.

Those who earn more incur a higher marginal tax rate. This is known as a progressive tax system.

Former finance minister Tharman Shanmugaratnam explained in 2010 that under Singapore's progressive tax system, "those with higher incomes or wealth contribute more than the rest".

At the same time, he said that the overall burden of taxes on Singaporeans remains low so as to "encourage enterprise, hard work and allow our economy to keep growing at a healthy rate".

Compared to other developed economies like the United States (37 per cent) and France (45 per cent), Singapore's highest income tax rate (22 per cent) is relatively low.

Still, it's always a little hard to part with your hard-earned money, so if you're looking to minimise your income tax, we've got two words for you: Tax deductions.

The IRAS has an exhaustive list of tax deductible donations, including donations made in cash, artefacts, and even donations of land and buildings.

The donations have to be made to the Community Chest or any approved Institution of a Public Character (IPC) to receive a tax deduction that is a whopping 2.5 times the donation amount.

According to Tax Practice Leader Loh Eng Kiat from accounting firm Baker Tilly Singapore, it may be possible to pay zero income tax — legally — even if you earn a significant employment income, thanks to this generous tax deduction.

The catch? You will need to donate close to 40 per cent of your earnings to an approved Institution of Public Character.

Suffice to say, this is an extreme measure to take  — Loh says some may think of this as a "nuclear option" if your sole purpose is to reduce your personal income tax.

But for a genuinely altruistic person who donates on a regular basis, or perhaps a globally mobile individual who may be used to much higher personal tax rates, this option might just turn out to be quite feasible especially since it can kill two birds with one stone.

How to use a donation to pay less income tax

Let's say you are feeling particularly altruistic this year and wish to make a donation to some charities (which by the way, have been struggling during the pandemic).

Of course, not everyone can afford to give away thousands of dollars at one go.

But you can still get this tax deduction if you make regular donations as long as they were made in the Year of Assessment.

A small monthly donation of S$200 can get you a tax deduction of S$6,000. This might not seem like a significant reduction, but when taken together with the rest of the deductions available, it will go some way in reducing your taxable income.

If you are an employee, you can claim deductions on employment expenses.

Bear in mind that these expenses must be 1) absolutely necessary for your employment and 2) not reimbursed by your employer.

And no we're not just talking about the big ticket expenses that you pay out of pocket for your work.

Even the smaller payments like public transport expenses (for instance, when travelling from office to other destinations for work) and regular subscription fees for networking or professional updates can be counted.

You can even claim the cost of electricity and telecommunication (like your mobile phone usage) and the cost of setting up your WiFi — if you made these expenses so that you can work from home, for example.

Exercise a little attentiveness to avoid overpaying your tax

Speaking of being gainfully employed, Loh said that prolonged work-from-home situations have blurred the lines between home and office.

As a result, some employers might start offering their employees more welfare benefits, like reimbursing the employee their entire mobile phone bill.  This is a kind gesture but Loh advised employees to exercise a little attentiveness to avoid overpaying their income tax.

A reimbursement of a private expense — in this case a mobile phone bill — is counted as taxable income. However, if the same phone is used for work, then the portion of the bill relating to work purposes should be identified and removed because these are not taxable, he explained.

"It is important to distinguish between a reimbursement for a business expense incurred by the employee and one designed merely to reimburse the employee in respect of their private expenditure. The latter is taxable, the former is not."

If you are a gig worker or a self-employed worker (like a food delivery rider, a private-hire driver, or a home baker), then you might be glad to know that the range of tax deductions available to you is broader.

This is because the income you earn is not considered employment income, but your individual business income, said Loh, who used the example of a wannabe influencer, aka, Key Opinion Leader (KOL):

"For example, as a KOL-aspirant, the cost of that new sharp tuxedo you rented as an accessory for producing a James Bond-themed fee-paying vlog should certainly accord you with some tax claim (no clandestine efforts required by the way).

On the other hand, your friend who rented the same tuxedo on his own account for his upcoming black-tie corporate event is unlikely to be able to claim any tax break for that cost against his (only) source of employment income."

There are many tax deductions that self-employed workers should take advantage of.

If you incur research and development expenses in the course of your business, you might be able to claim a tax deduction on Research & Development expenditure.

A private-hire driver who spends money on servicing his vehicle (which he uses in the course of his work) can claim a tax deduction on these expenses.

An owner of a cafe would probably spend a lot on running costs (such as advertising costs, rent and utility, and repair fees) and these too can be claimed as business expenses which are entitled to tax deductions.

While each individual expense might not be very large, taken all together, they can add up to a substantial chunk of money taken off your income to be taxed.

Loh had one more tip for self-employed Individuals: Use business losses to offset your taxable income.

"Your (tax-adjusted) business losses can generally be carried forward to be used in future years; this can help you save on taxes if you turn profitable later, or even if you subsequently earn income in the capacity of an employee again."

3. Claim your reliefs and rebates

There is a wide variety of tax reliefs that are available and a lot of these are granted automatically by the IRAS.

If you earn an income, then you automatically qualify for the earned income relief which deducts between S$1,000 and S$8,000 off your taxable income, depending on your age.

If some of that income goes into your CPF as your employee CPF contribution or a voluntary contribution into your Medisave account, you can also claim CPF relief. If you top up your or your family members' CPF Special Account or Retirement Account, you can deduct that exact amount (capped at S$7,000) off your taxable income.

Do you have to support your elderly parents or grandparents who are not working? Then yes, you can deduct S$5,500 or S$9,000 per dependent off your taxable income.

NSmen will automatically receive relief — between S$1,500 and S$5,000 — depending on whether they performed NS activities during the year and whether they hold key appointments. Wives of NSmen also receive S$750 in relief.

There are many other forms of relief, including some that are available to working mothers, new parents, and employers of foreign domestic helpers, and you can check them out here.

The IRAS also has a nifty relief checker that does a cursory check on the various types of relief you might be eligible for. 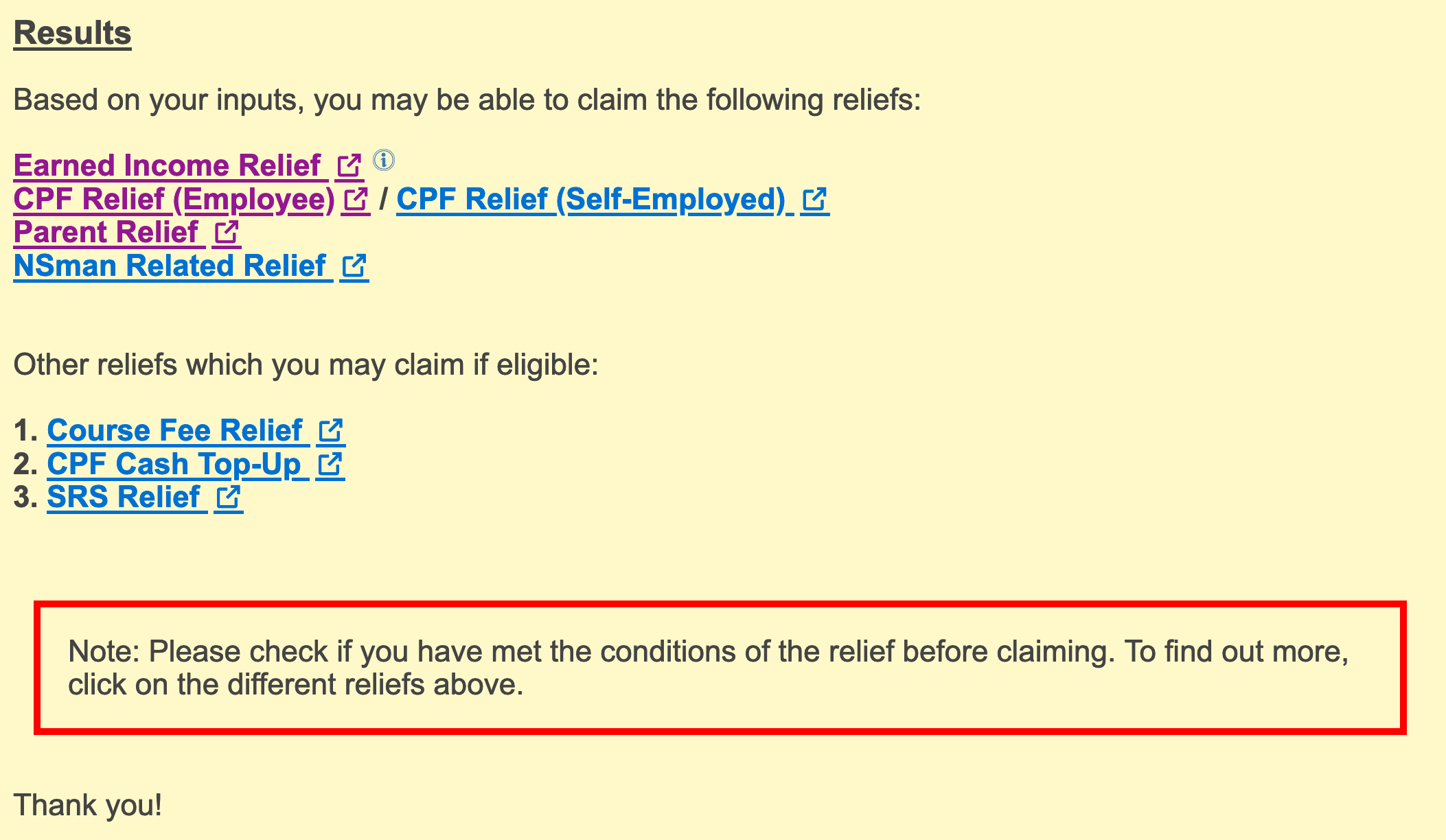 If you're still reading this, you might have realised that you need a bunch of tax deductions in order to make a significant dent in your your taxable income.

Here, we use the IRAS tax calculator to show you how a male Singaporean in his twenties, earning S$4,000 per month (S$48,000 annually) can reduce his taxable income enough so he pays zero income tax.

There are several deductions that are considered: When taken together, the various tax deductions above can add up to lower your taxable income. You can find out more about income tax and the various tax reliefs on the IRAS website.

Update: The article was updated with clearer examples and correct figures after it was publised. Top image via.