I was in my A-level year in 2016 when my younger sister and I came across a Facebook post by Mindef announcing their adoption drive.

I adopted Cody from this batch of 18 dogs.

We had always wanted to adopt a dog, but the rest of my family weren’t as keen.

It took about five months from when we first saw the post in March or April 2016, to when my family finally decided to adopt a dog in August.

Adopting a military dog seemed ideal for my family as we were first-time dog owners.

We heard that the retired dogs had received basic obedience training and did not require as much exercise as adopting a younger dog.

We were also excited about the fact that we could give a military dog like Cody a good retirement in a loving home.

2. Were you expecting to hear back from Mindef after you registered your interest in adopting a dog?

Yes, I called the Military Working Dog Unit (MWDU) hotline to ask which dogs were left from the adoption drive, and arranged a date for when we could go down to the unit to meet the dog.

The personnel also briefed me about their adoption process.

This included a house visit by some trainers from MWDU, as well as an interview with my family to assess whether we were fit to adopt the dog.

3. How did you settle on Cody?

I didn’t have a choice actually.

By the time we contacted MWDU, I was informed that there was only one dog left — a 12-year-old springer spaniel, Cody.

When we went down to the unit to meet Cody for the first time, we learnt from an officer there that Cody had been adopted by a family a few months ago, but because their toddler was sensitive to his fur, they returned Cody to the unit.

We were also told then that he was emaciated, and did not have a good appetite.

Cody, at 12 years old, was considered to be quite elderly.

The lifespan for springer spaniels is 12 to 14 years, so we had to be prepared that Cody would likely not be with us for a long time.

4. How did you feel when you were picked as an eligible adopter?

I can’t remember much about being informed that we were approved as Cody’s adopters.

The officer there made it seem that our family was likely to be approved, given that our house visit and meeting with Cody went well.

Maybe it also had to do with the fact that the officers there seemed relieved that we were happy to adopt the last dog left in the adoption drive, despite the fact that Cody was returned to the unit by his previous adopters.

SAF also said no matter the outcome of the adoption drive, they would continue to care for the dogs.

5. What was the process like to go from being eligible to becoming a pawrent?

MWDU kept us updated with when we could pick Cody up to go home. It took about three weeks from when we first met Cody at the unit, to when we finally brought him home.

Between breaks when studying for my A-level exams, I would pore over whatever books the library had about keeping dogs and what adopting a senior dog would be like.

My family also busied ourselves by buying whatever we thought the dog might need, like toys, a dog bed, food and grooming supplies.

6. What was your first interaction with your chosen dog like?

At our first visit to the unit, we were brought to his kennel where Cody was housed.

He was extremely calm and quiet, as compared to the other dogs at the kennel who barked at us when we walked past.

When the officer let us into his kennel, Cody immediately lay down at our feet, like he was expecting some sort of belly rub.

It sounds quite ridiculous now to think about it, but I felt an instant connection with Cody, and started crying as soon as I started petting him.

The officer brought Cody out to a grassy play pen so that we could observe and play with him some more.

Cody moved slowly, as expected of a dog his age. He was also very calm when the officer placed his collar and leash on him. 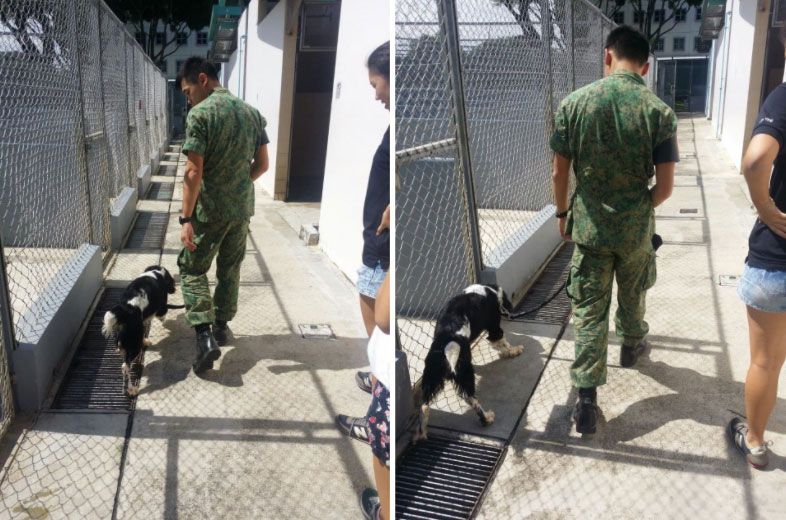 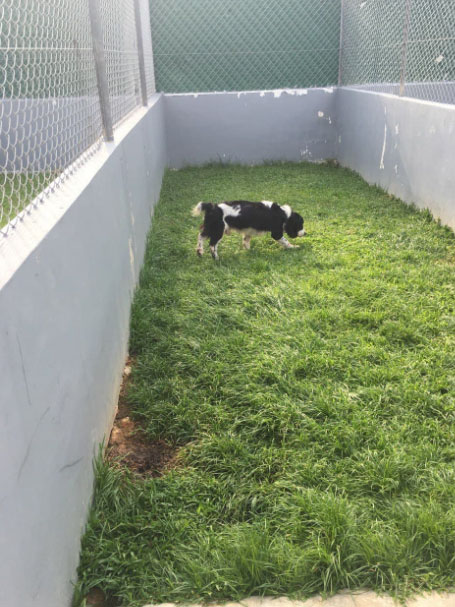 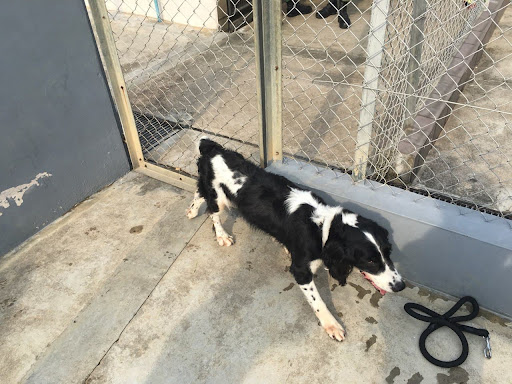 He told us that military dogs are trained using positive reinforcement, and trainers would reward them with tennis balls if they successfully obey a command.

I saw this with my own eyes when Cody, as old and tired as he seemed, perked up immediately when the officer pulled out a tennis ball and commanded Cody to “sit”.

He executed the command perfectly, and snapped up the tennis ball when the officer tossed it to him.

I made a mental note to find tennis balls for Cody to play with when he came home with us.

We decided to keep Cody as his name.

One, because it wasn’t too bad of a name, and two, we were afraid that at his age he wouldn’t respond if we started calling him by another name.

7. Did the dog have any adjustment issues? Was he always on high alert?

Overall, Cody settled in quite well, give and take some adjustment issues.

For one, he wasn’t used to sleeping in a soft dog bed at first.

I’m guessing it was because he was used to sleeping on hard cement for most of his life -- he also had pressure sores on his joints.

It was only after a while that he started taking to his dog bed a lot more. 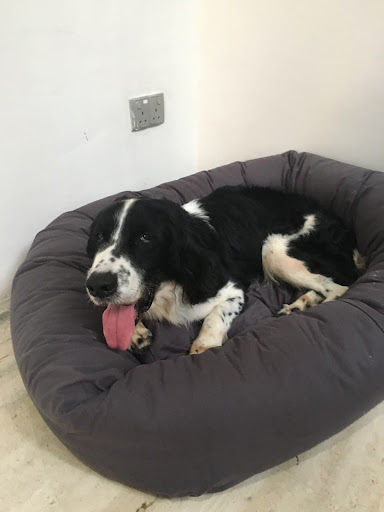 We were also told that for the last couple years before he was put up for adoption, Cody retired from his bomb sniffing job and was brought to Singapore Armed Forces road shows to greet members of the public.

But his sense of smell was still as superb as ever.

He would be able to smell if something good was cooking in the kitchen from across the house, and would try to stand around my mother to get scraps from her.

Chinese New Year was also a great time for Cody.

He went crazy for the smell of bak kwa to the point where we had to hide our bak kwa stash in an obscure corner of the house so that he couldn’t get to it.

8. Was it much easier to get a response or train the dog because it is presumably already well-trained?

The whole thing about “you can’t teach an old dog new tricks” was partially true in Cody’s case.

He was quite stubborn and he wasn’t interested in learning to do new tricks, but it didn’t really matter because he knew all the basic commands, like “sit” and “stay”, which was good enough for us.

Cody was also really well-behaved, so there wasn’t a need to scold him or tell him off.

Being the new dog on our street, the neighbours’ dogs would go berserk on Cody, barking at him furiously when we walked past their gate.

But Cody would react with the same calm disinterest as you would expect of an old man who had already seen too much in his lifetime.

Even the fiercest of dogs had no effect on Cody, he would just glance at them and carry on with his walk.

9. Was there anything that stood out about your dog?

What struck me most about Cody was how incredibly loyal he was, despite only knowing me for a short amount of time.

When I was up studying late into the night for my A-level exams, he refused to go to sleep first and insisted on staying by my feet while I studied.

This was even after multiple times of me carrying him into his bed.

He also grew really attached to my family. When any of us left the house, he would stand by the door and would seem really sad.

Even if I took a bit too long in the shower, I would see his nose pressed up against my shower door, signalling me to hurry up.

Cody also had these really pensive eyes, as though he’s been through some things in his life that not many other dogs have.

We would catch him looking into the distance at times, and would often wonder what on earth he was thinking about. 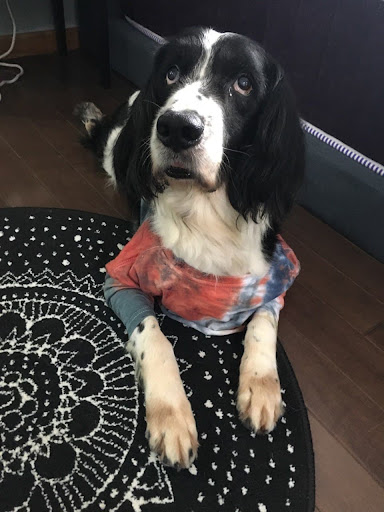 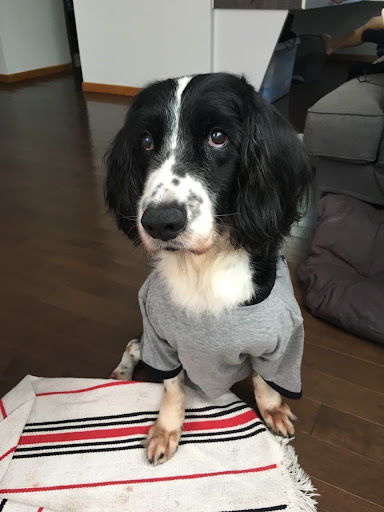 He loved going out to the field behind my house to play a round of “fetch” with his favourite tennis ball.

He was also deathly afraid of thunderstorms, and would pace around nervously if he could sense that one was brewing. 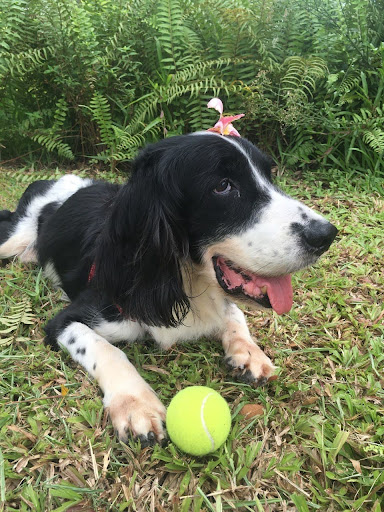 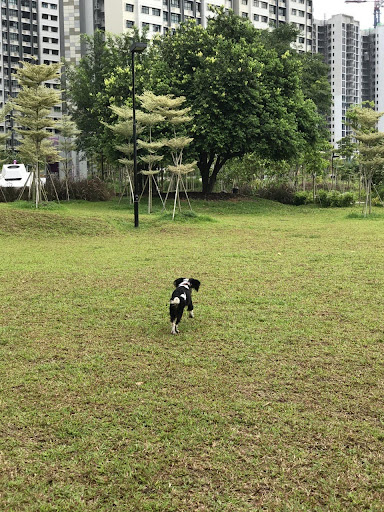 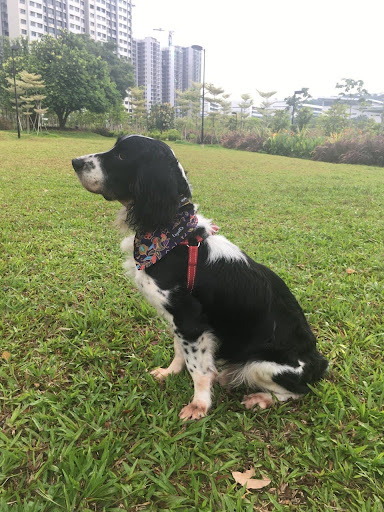 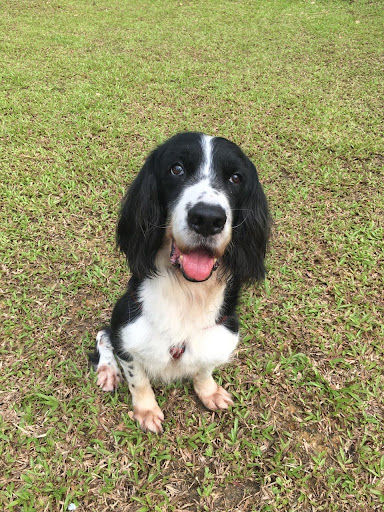 10. What happened eventually to Cody?

We knew that adopting a dog as old as Cody would mean that we wouldn’t have a lot of time with him.

Unfortunately, we lost Cody earlier than expected in April 2017, just eight months after we adopted him.

After a few good months of him enjoying his retirement with us, Cody started falling ill.

He became lethargic, and wouldn’t have much of an appetite.

It took a number of visits to different vets to find out that he actually had late-stage cancer that likely went undetected even before we adopted him.

One of the vets suggested that because SAF dogs aren’t neutered, they are more prone to getting cancer.

Operating on Cody’s tumours wasn’t an option either, as his emaciated frame and poor blood test results meant that it was going to be a risky surgery, one that he might not survive.

We were devastated by the news, and tried to make Cody as comfortable as possible in his last days.

But as tired and sick as he was, true to Cody’s nature, he would try to sit near our family when we were watching TV or gathering for our meals.

On the morning of one of his scheduled vet appointments, he lay next to me on the floor of my living room, and passed shortly after.

It was difficult trying to get over his death.

I hadn’t realised how attached I became to him, and missed his presence around the house.

Although Cody was only with us for such a short time, he left a deep impact on my family.

He brought us closer together in a time when my sisters and I were in our teenage years and were more inclined to spend time outside, rather than with each other.

Cody gave most of his life in service to Singapore, and as sad as I am that he wasn’t with us for long, I’m comforted knowing that he got to spend his last months in a loving home.

I have not adopted another dog since.

All photos by Low Jia Ying