Six-year-old Ishani Shanmugam is now the youngest person ever to break the national record for most digits of pi memorised on Oct. 13, 2021.

She recited a whopping 1,560 decimal places of the mathematical constant, taking her rightful place to the pi throne in the Singapore Book of Records.

Speaking to Mothership, Vennila Munusamy, 36, who is Ishani's mum, shared that Ishani had demonstrated an interest in stories, flash cards, and puzzle boards since she was two years old.

When she and her husband, V.S. Shanmugam, 42, introduced flashcards of world flags to Ishani for the first time, she immediately took to it, and was able to identify and name all 195 countries at two-and-a-half years old.

As she grew older, Ishani continued demonstrating her remarkable memory prowess, and subsequently began developing an interest in numbers.

At four-and-a-half years old, the couple introduced pi to her "as it is an irrational number" to Ishani, who then developed an appetite for repeating the numbers after a short while.

In September 2020, Ishani went on to achieve her first Singapore Book of Records, for reciting 409 digits at the age of five.

Vennila added that the achievement "really motivated" Ishani, who became even hungrier to learn.

From April 2021, Vennila shared that the couple thus continued giving Ishani a few pi digits to learn every day, to help her develop her interest.

"When we told her about the previous record on Pi [was] for 1,505 decimal places, she was excited to surpass it."

And surpass it she did, as on Oct. 13, Ishani, who attends K2 at PCF Sparkletots, went on to achieve the stellar feat of reciting 1,560 digits of pi in front of personnel from the Singapore Book of Records. 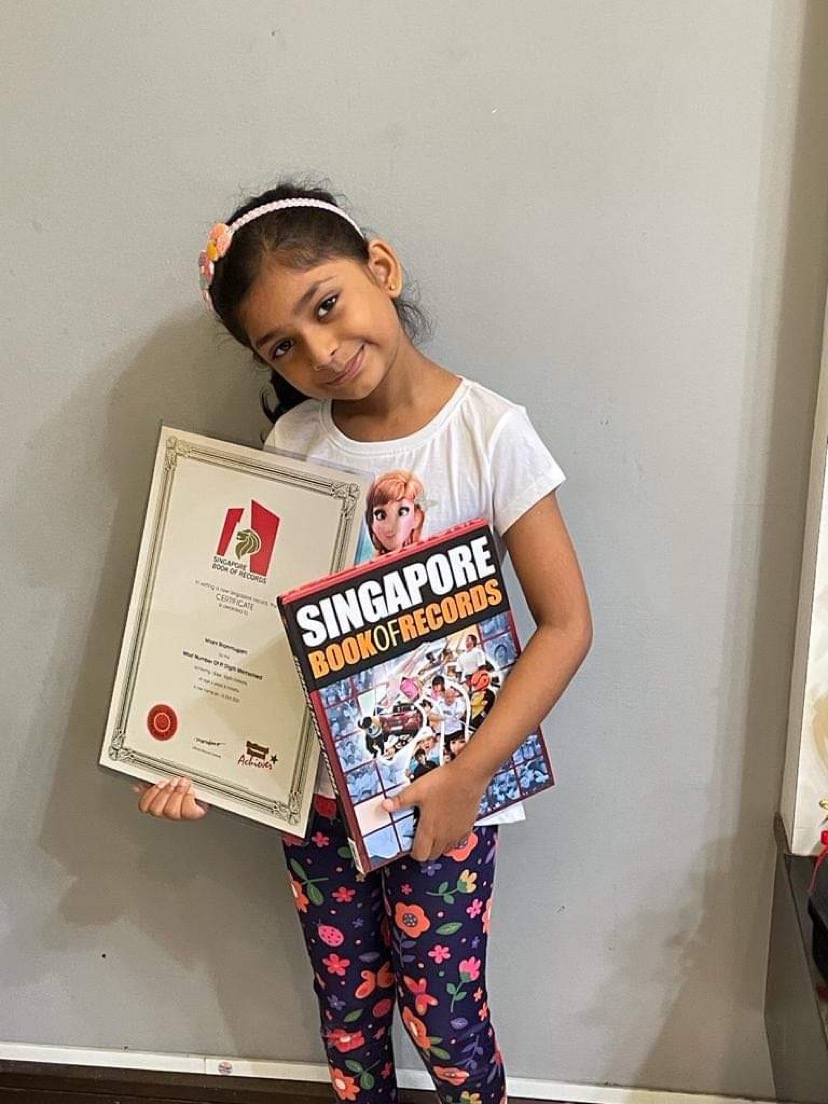 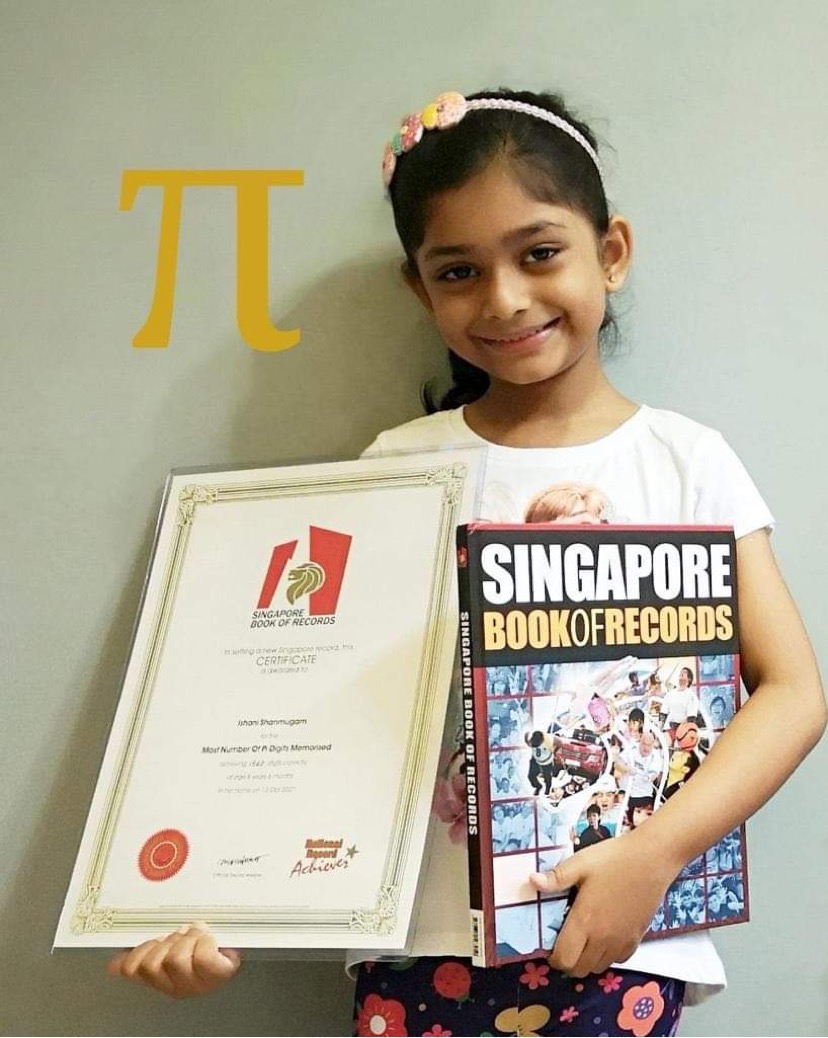 She did so on her first attempt, in 10 minutes and 15 seconds.

"She was so happy after achieving [the] Singapore Book of Records for reciting [the] most number of Pi digits in Singapore. We are happy for her achievement and will keep supporting her interest on [whatever] she wants to pursue." 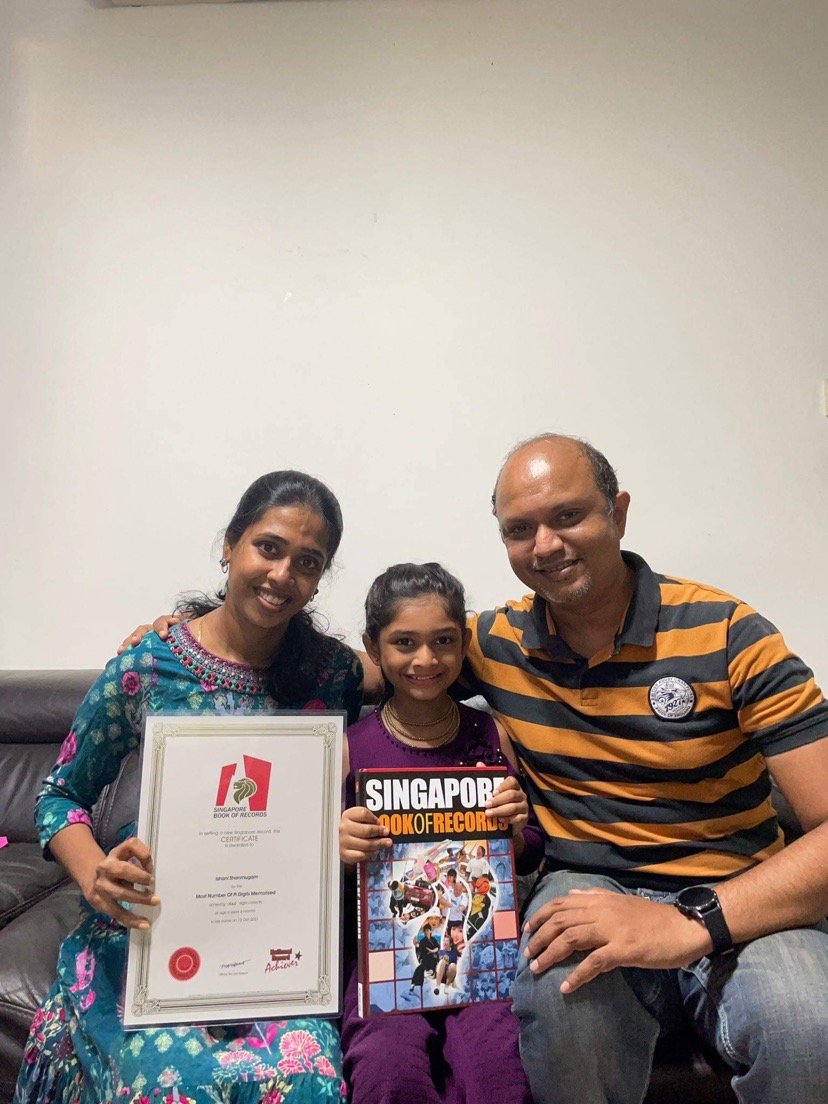 All images courtesy of Vennila Munusamy