As Singaporean para athlete Yip Pin Xiu braced herself for the 50-metre S2 backstroke event at the Tokyo 2020 Paralympic Games on September 2, 2021, she was a bundle of nerves.

Despite having swept the gold medal in the 100-metre S2 backstroke event just a week prior, the swimmer was beset by a case of the jitters.

In particular, Yip had her sights on Japanese swimmer Miyuki Yamada.

Yamada, you see, is only 14 but during her Paralympic Games debut in the 100-metre S2 backstroke event, she cut through the water like a torpedo, trailing behind 29-year-old Yip by less than 10 seconds.

And the thought of facing Yamada again in the 50-metre S2 backstroke event kept her on edge.

By then, Yip's phone was also buzzing with a week's worth of congratulatory messages for her triumph in the 100-metre S2 backstroke event.

She was eager to bask in the glow of her win, but she knew that she could not afford to be distracted.

"I had to put my phone aside and just deal with the routine. Wake up, breakfast, training, and things like that. I couldn't celebrate yet."

Despite the emotional roller coaster, Yip went on to defend her gold medal in the 50-metre event, beating Yamada by a nail-biting 4.94 seconds to take first place.

And that brings us to our chat with the elite para athlete five days later. Ensconced in a hotel room in Singapore while serving her Stay Home Notice, Yip is noticeably relaxed and chatty.

There's no escaping the fact that Yip, who has Charcot-Marie-Tooth disease, has achieved a rare feat. Her latest haul brings her Paralympic Games gold medal tally up to five — and it surprises her, if she's honest.

"I think over the years, I don't really keep track. I don't look at the medals every day, don't keep track of how many medals I have, but really, I just continue training hard and trying to get to the top again."

"So like when you said 'five medals', it just seems like a very big number," she laughed.

Humility aside, five gold medals is a testament to Yip's tenacity and perseverance shown throughout her 17-year sporting career in reaching the pinnacle of parasports. And while the Paralympic Games veteran currently lives her life in four-year cycles, she says that competing and winning at the Games was not the goal when she started competitive swimming.

"In between my first cycle, my coach sat me down, went through the rankings with me, and she said, like hey you got a pretty good chance, you already ranked pretty well in the world...like I had the potential to go somewhere and do something.

I just needed to be a lot more committed."

Of course, being a professional athlete, especially one with a long career, requires sacrifice and commitment. But there's another crucial element: Support.

"What has really helped me is to be in the right environment — an environment where my family is supportive, my friends are supportive — to be around people who understand that this is not just a dream, people who can make this a reality," says Yip.

Her words bring to mind an interview that we did last month with three first-time Olympians who told us why their Olympic Games debut was likely to be their last.

In particular, diver Jonathan Chan lamented the lack of support:

"We are not even training full time...[athletes in other countries] have a lot more support, and sports in their country is just a [bigger] deal. Then ours is like just a CCA."

A CCA, a side project or whatever you call it — Singapore doesn't seem to value competitive sports enough.

"Singaporeans think that competitive sports are not value for their time," says Yip who of course begs to differ, listing a litany of life skills like resilience, time management, and speaking with conviction which can serve one well even outside of sports.

Now, Yip isn't just speaking about government support, which she has been receiving (she has effusive praise for Sports Singapore which doles out the Sport Excellence Scholarship or spexScholarship, of which she is a recipient).

Support from the public is also equally important, says the swimmer.

She urges Singaporeans to be consistent supporters, cheering on our local athletes in good times and bad, in other words, "celebrating the spirit of being an athlete".

"Say you're a Liverpool fan or Manchester United fan you really can support them throughout the whole thing even if they win or lose, right, but and then we need to have the same thing for our athletes.

Because you really follow the team, you follow them through the ups and downs. If you can do the same for Singapore athletes, that would be great."

Conversely, athletes have to be more open about their lives, she says, and in doing so, allow the public to understand what they go though.

Support also comes in the form of recognition, like the award that Singapore bestows on medal winners.

Singapore offers one of the highest monetary awards in the world for a gold Olympic medal — S$1 million. The only person to ever receive the S$1 million Olympic gold medal award is swimmer Joseph Schooling, for his historic win in Rio de Janeiro in 2016 for the 100-metre butterfly.

The disparity has been thrown into sharp relief this year especially since Yip's golden haul from the Paralympic Games is contrasted with the empty medal tally from Singapore's Olympians.

Yip says that she always found it difficult to speak up about the disparity simply because "I am the person who is in the middle of it all".

But over the years, her perspective has changed. It is exactly her position — being a recipient of the medal award — that gives her the opportunity to speak about it.

"This inequality is happening. For me personally, I don't think it's really so much about the money, but it's more of the message that is sent out...that people with disabilities are not equal."

Does this suggest that Yip's five Paralympic gold medals — and all of the accompanying sweat and tears — are the equivalent of what Schooling put in for his one Olympic gold medal, just because she is differently-abled?

Or perhaps it indicates that her sport is not as "authentic" as the sport that able-bodied swimmers take part in because Yip can't use her legs to swim, and hence doesn't deserve the same recognition?

According to Yip, the training that para athletes go through is just as intensive as that of their able-bodied counterparts.

She trains in the pool six days a week, with double sessions on some days. She trains at the gym two to three times a week. She uses all of the sports science that able-bodied athletes use and has a team — comprising a biomechanist, a physiologist, a dietician, a strength and conditioning coach, and a psychologist — on hand to ensure that she is competing at her best.

In fact, some might say that para athletes have to put in more effort to overcome their disadvantages and maintain their peak form:

"I do have to go to see the physio a bit more just to maintain, to be in tip top condition. But I think able-bodied athletes also have to do that. Maybe the difference is that because I sit a lot, I have to release my hip flexors and my knees a bit more because they are pretty bent."

So why are the award amounts different?

Mainly because the awards are distributed by different non-governmental organisations.

The award for a Paralympic gold medal comes under the Athletes' Achievement Award which is administered by the Singapore National Paralympic Council (SNPC).

The award for an Olympic gold medal comes under the Major Games Awards Programme which is administered by the Singapore National Olympic Council (SNOC).

Grace Fu, then Minister for Culture, Community and Youth, made this distinction very clear in a 2016 parliamentary reply. In her reply, she also clarified that:

Olympic gold medals get a higher payout simply because of better donor awareness of the Olympics over the Paralympics.

When contacted, the SNPC declined to answer my questions about the Athletes' Achievement Award and the organisation's fundraising campaigns.

Instead, a staff member told me that the public awareness of para athletes and the SNPC tend to peak whenever the Paralympic Games come round (that's every four years, by the way).

She also pointed me to the SNPC's current fundraising campaign which, aside from raising money to support para athletes at the Tokyo 2020 Paralympic Games, hopes to raise funds for other major Games held this year as well.

The response is telling. The Paralympic Games has ended but the campaign has only attained five per cent of its S$200,000 goal. 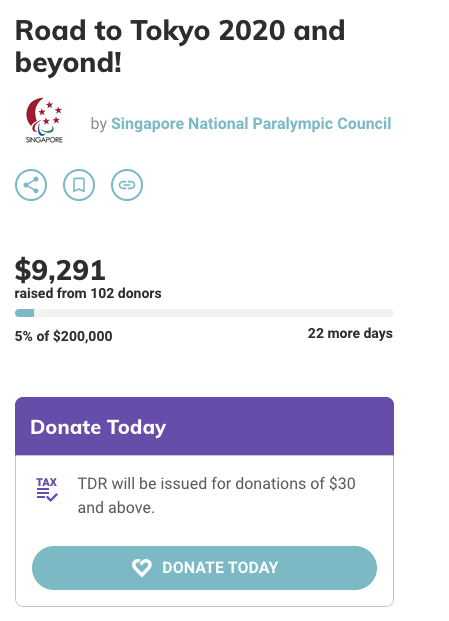 Yip attributes this inertia to a weak sporting culture. It is an area where Singapore is lagging behind other societies. Even Yip's sponsors — Speedo and Citibank — are multinational companies from other countries.

When contacted by Mothership, Citibank said that its involvement with the Paralympic movement started in 2012 through its support of Team USA. It started engaging the SNPC along with local para athletes since the 2016 Summer Paralympics.

"Since then, we have been leveraging on both internal and external platforms to help raise awareness on disability inclusion and contribute towards changing perceptions of people with disabilities."

Citibank's initiatives to promote and support para athletes is admirable and local companies and Singaporeans will do well to follow its lead.

But times are changing. Countries like the U.S., Malaysia, and Australia have taken the lead in equalising the reward for Olympic and Paralympic Games medals. There is hope that one day, Singaporeans and Singaporean companies will see the value in putting their money where it matters. In the meantime, Yip has made it her mission to make that happen.

"If I want sports to grow in Singapore, then I do have to voice it out, and I hope that other people will also do the same."