Several elderly men were seen throwing punches, shouting, and shoving one another over a vacant table at Block 538 Bedok North hawker centre.

A video of the incident was posted to the Complaint Singapore Facebook page on Wednesday (Sep. 8).

The younger man in a white shirt was seen in the video standing on the seat, as he pointed and yelled at two other men -- a father and son duo -- standing by the table. 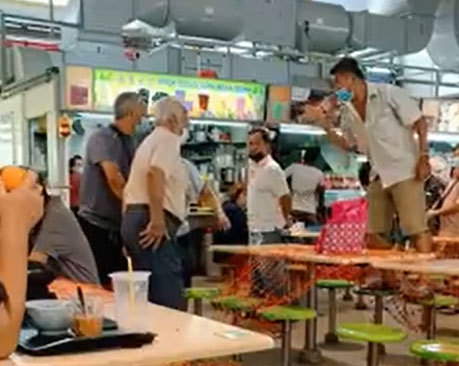 A heated verbal altercation ensued as the men involved began to raise their voice and refused to back down.

A stall owner told Shin Min that the dispute started when the 80-year-old man came into the hawker centre with his wife, son, and daughter-in-law, and were looking for a place to sit close to one another.

Since they could only sit in groups of two due to Covid-19 measures, they had to sit separately in pairs.

Another stall vendor said the 60-year-old was seated alone when the 80-year-old asked him about the vacant seat opposite him.

The incident was aggravated when the 60-year-old man shouted a crude insult at the older man.

The 80-year-old's son, seen in a grey shirt, came to his father's defence and charged towards the man, swinging his arms and wanted to pull the 60-year-old man off the table.

Amid the commotion, a woman standing beside the table fell down.

But the fight was uninterrupted as the men continued to argue.

Other patrons subsequently intervened to pull the men apart.

One person off-camera even shouted that the police were coming, in hopes that the fight would cease.

The 60-year-old man then left the hawker centre and peace was restored.

The video was greeted by snarky comments saying the combined age of the men involved was probably 200 years, and yet, they were acting so immaturely.

Others pointed out that the men were in too close contact to one another during a pandemic.

Another comment said there was no point in getting into an altercation over a meal.