A home-based bakery in Singapore, Sugary Kneads Co, has been accused of late deliveries, bad service, and poor food conditions by some of its customers.

Sent donuts late and to the wrong address

On Sep. 3, one customer, Lita Bear, shared on Facebook that she ordered some donuts from the bakery for a Teachers' Day celebration in school.

She had opted for a delivery slot between 8am and 12pm.

However, Lita said her order only arrived at 7pm, and it was sent to her home instead of the school.

Donuts were in bad condition

Lita then shared photos of the donuts that she received, which appeared to look different than what was advertised on the bakery's Instagram account.

Following this, Lita said she contacted the bakery and asked for a refund, but her request was apparently denied.

Here's how the conversation went down, according to Lita.

On Monday (Sep. 6), Lita updated her post, saying that the bakery had refunded her.

"Baker decided to finally refund and play victim, yet again. Baker decided to post bad about me in return, seriously? Refer to the snapshot of convos and her IG story, which part is a threat to baker?"

This was the Instagram story Lita was referring to: 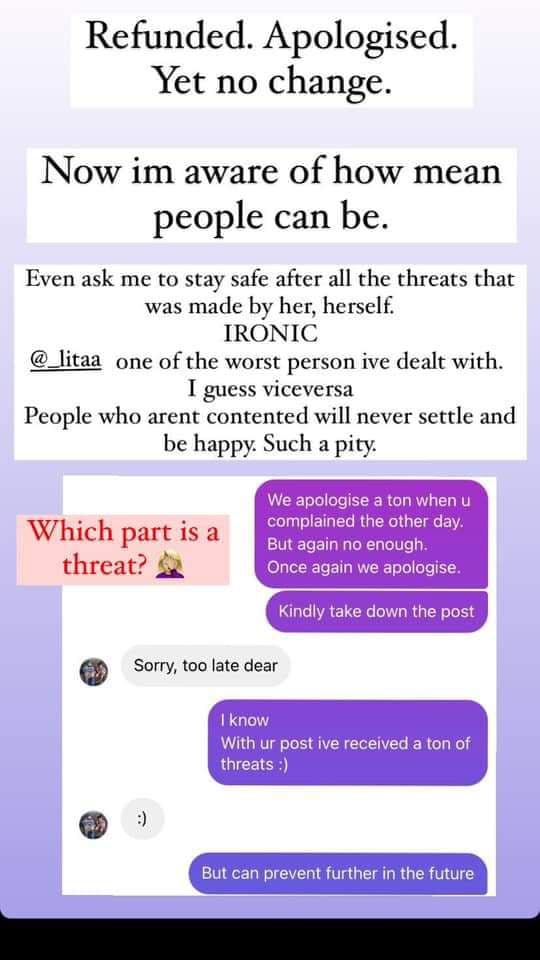 The post, which was uploaded onto the Complaint Singapore's Facebook page, claimed that a customer had ordered a S$330 cake for her wedding.

However, according to the post, the cake that the customer received was "a nightmare".

This was what the cake was supposed to look like:

The flowers used on the cake are chrysanthemums, which are typically used as funeral flowers as they are symbolic of death.

Speaking to Mothership, Sugary Kneads said that they arrived at the wedding at 12:30pm sharp.

The bakery added: "The photo we sent was a reference to the lace piping and flowers, not what the actual cake would look like."

Sugary Kneads also shared screenshots of their conversation with the customer.

Sugary Kneads told Mothership that the customer has since been fully refunded.

The Facebook post also stated that the cake was supposed to be assembled between 12pm and 12:30pm.

However, the cake was delivered later than the stipulated time.

The post was later updated and claimed that the bakery had asked for the post to be taken down:

"Seller demanded me to remove all of my postings as she has been receiving harassments. My post is solely for awareness and partly to express my disappointment.

Seller also requested for my name and I did not reply to her message. Her next message was mentioning my daughter’s name. If it was in any way to trigger me, it shows that seller is very defensive and immature. Surely dishonest, based on many negative complaints from comments below.

To everyone, before engaging in any bakers for your special event, do not repeat our mistakes. Google them, search them up on Facebook, ask around!" 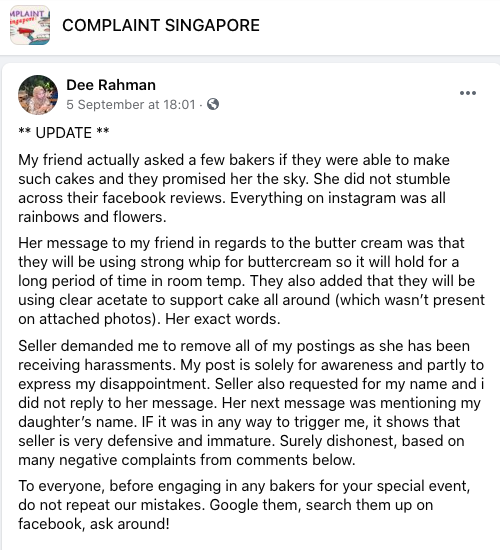 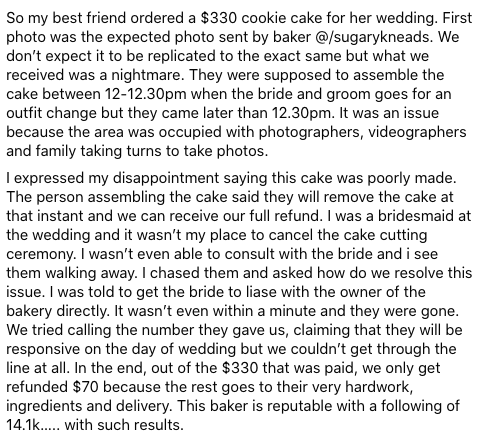 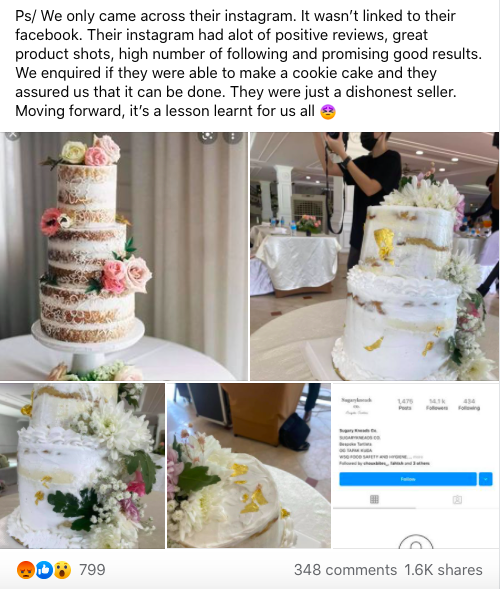 Baker left customer outside her door

In the post, which was also uploaded to Complain Singapore's Facebook page, the customer said that she opted to self-collect her order.

However, she was told to wait outside the baker's door. The baker did not appear again, she claimed.

Here's what happened, according to screenshots shared in the post: 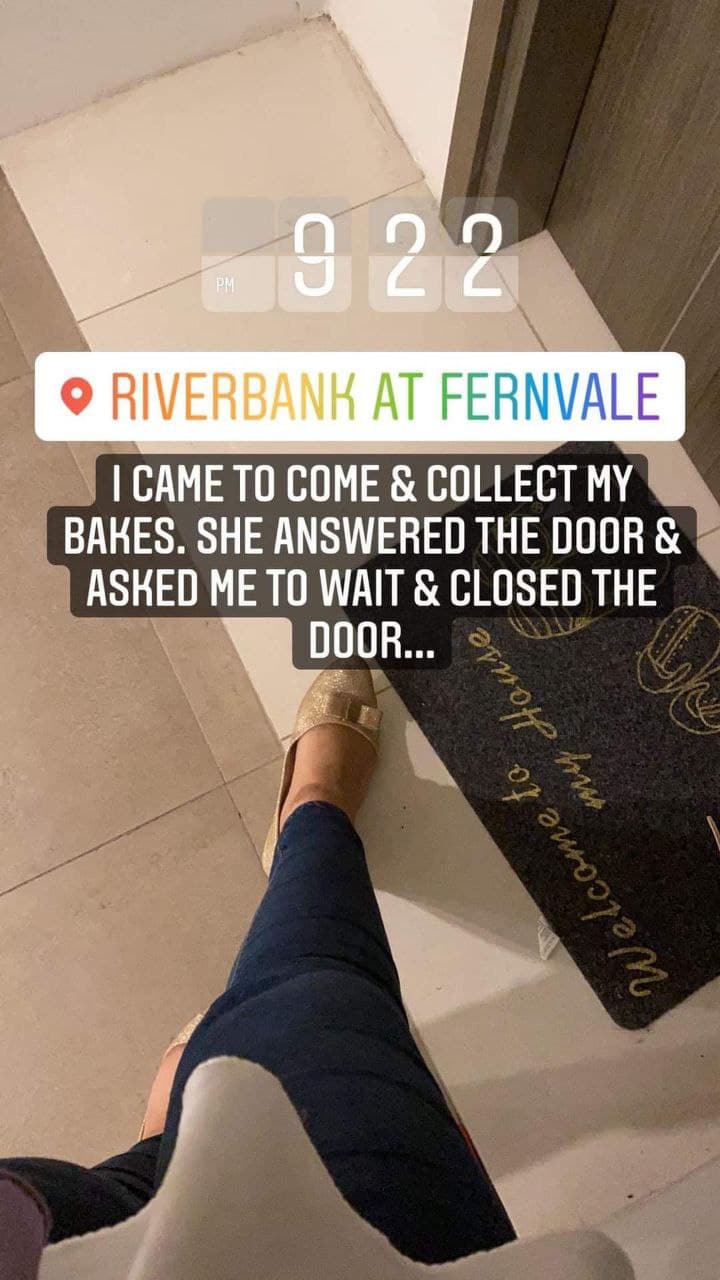 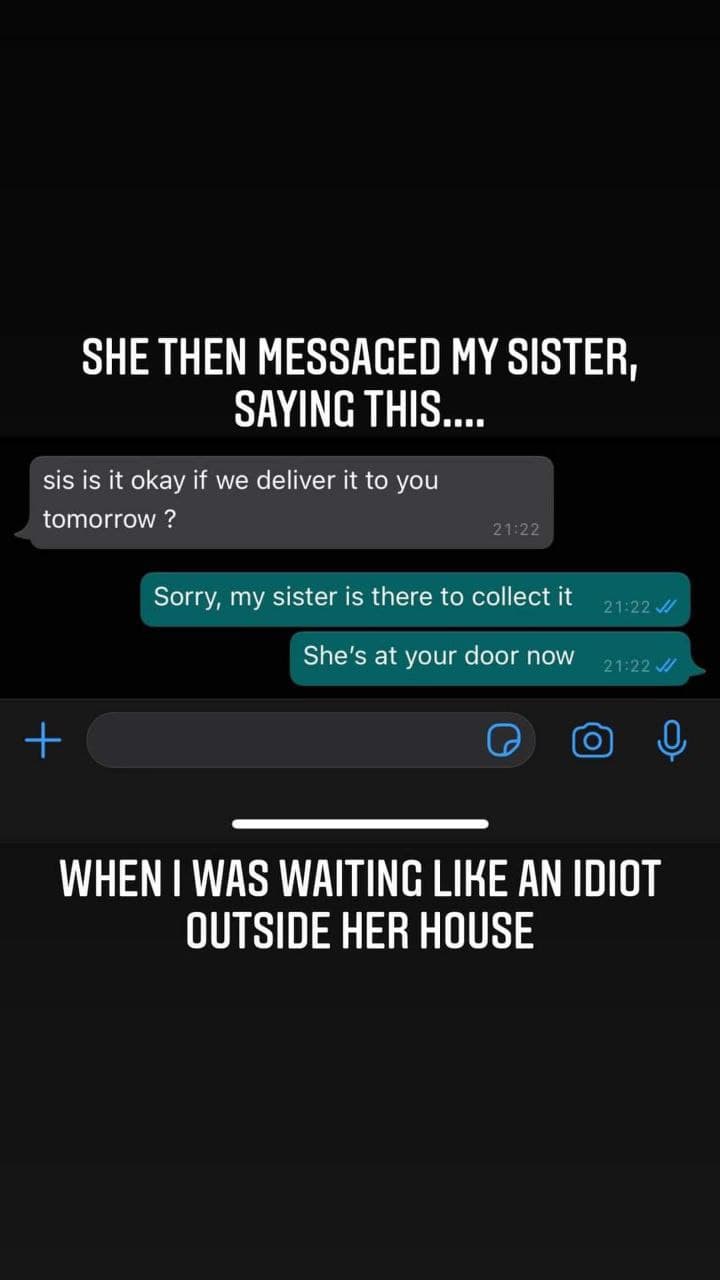 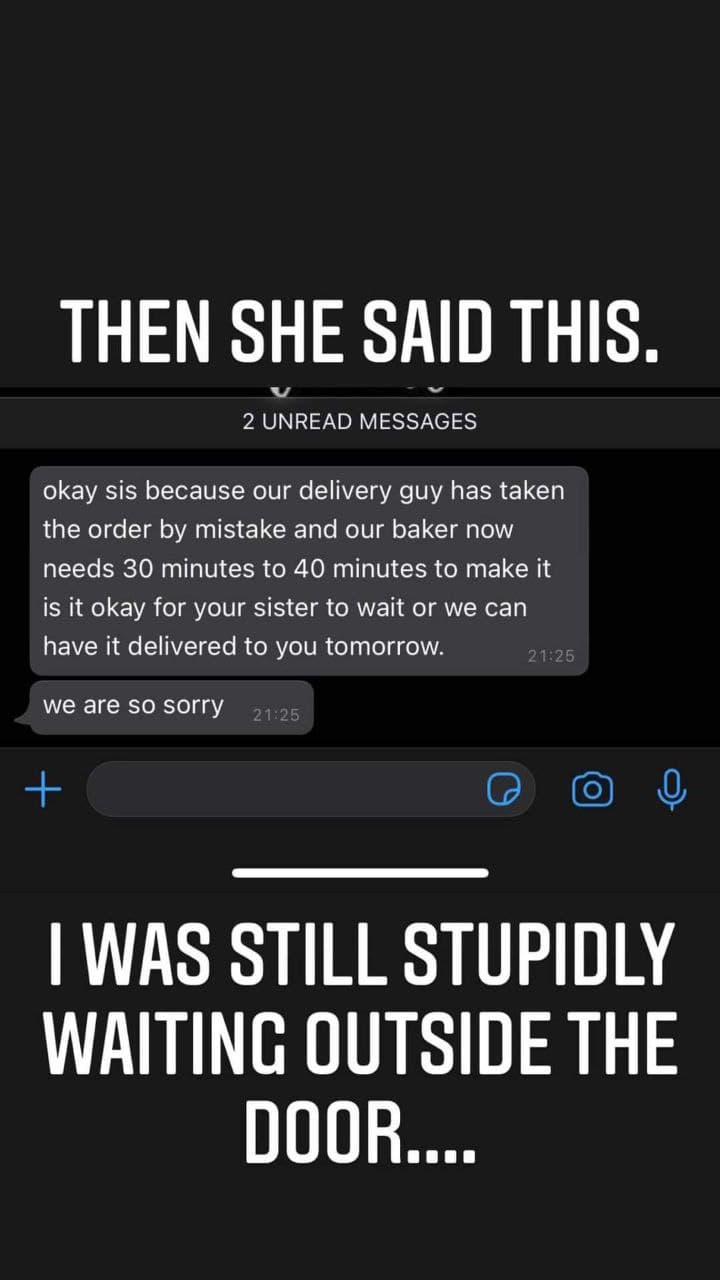 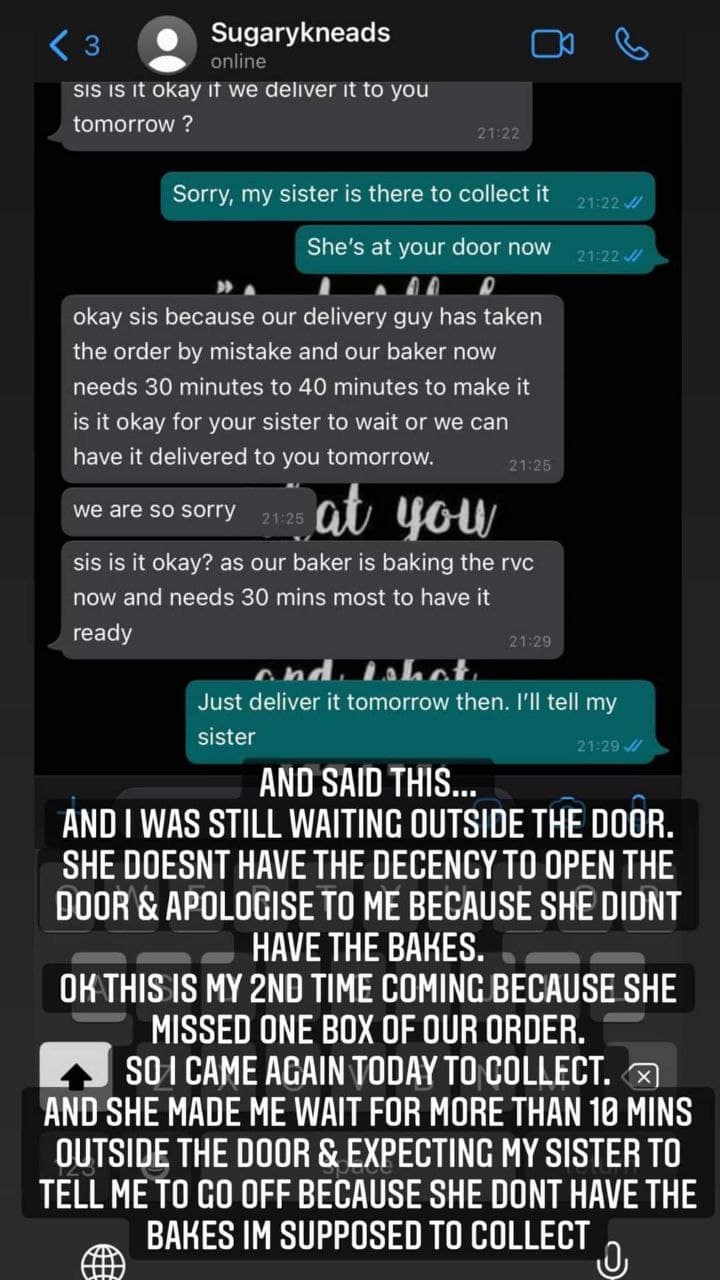 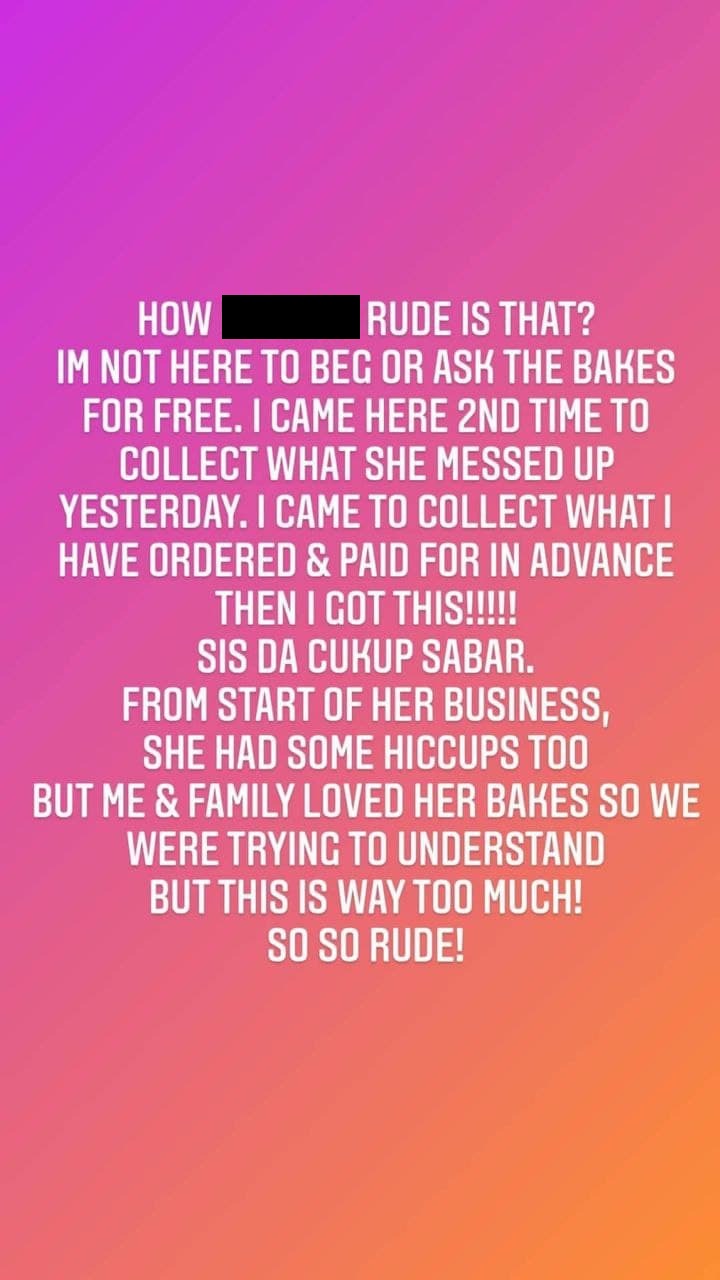 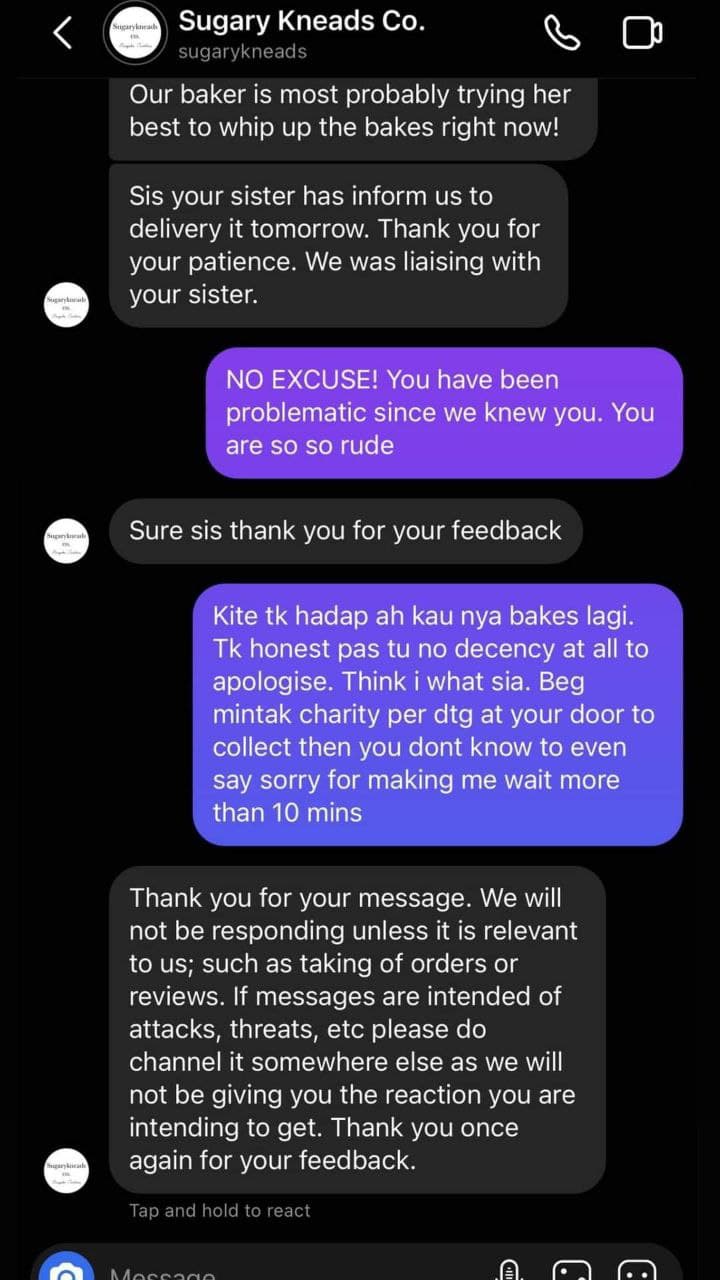 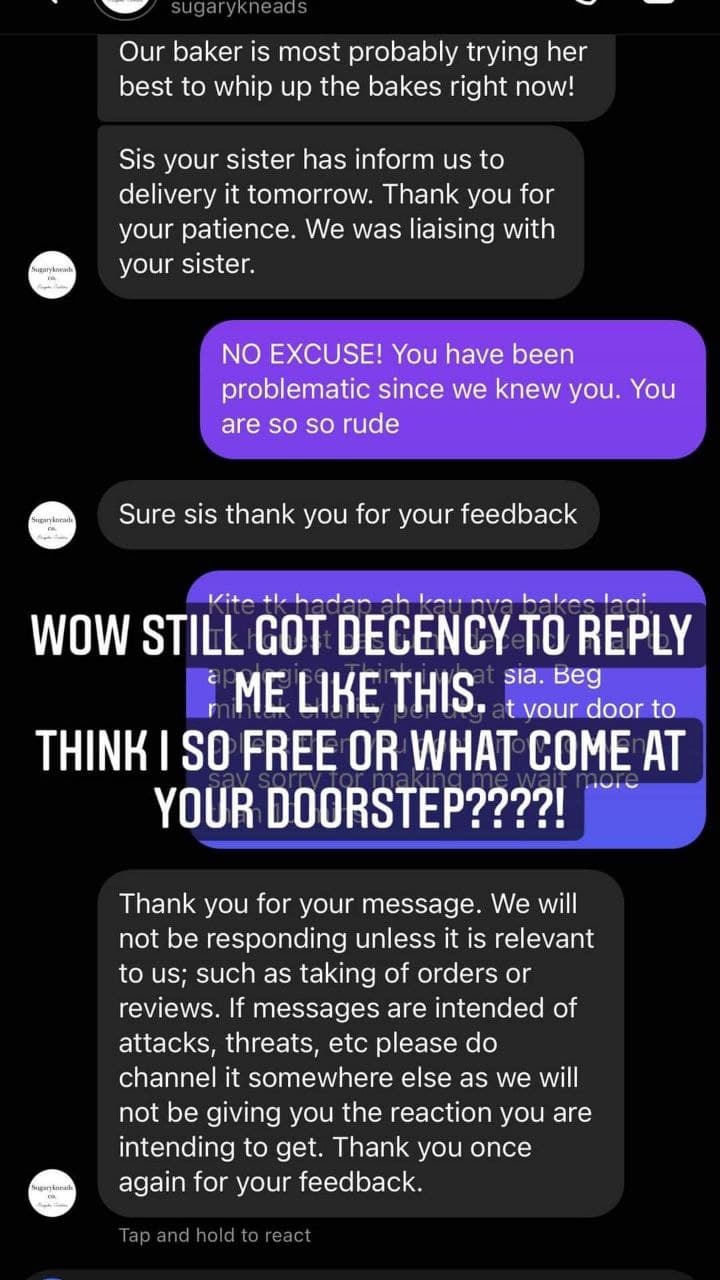 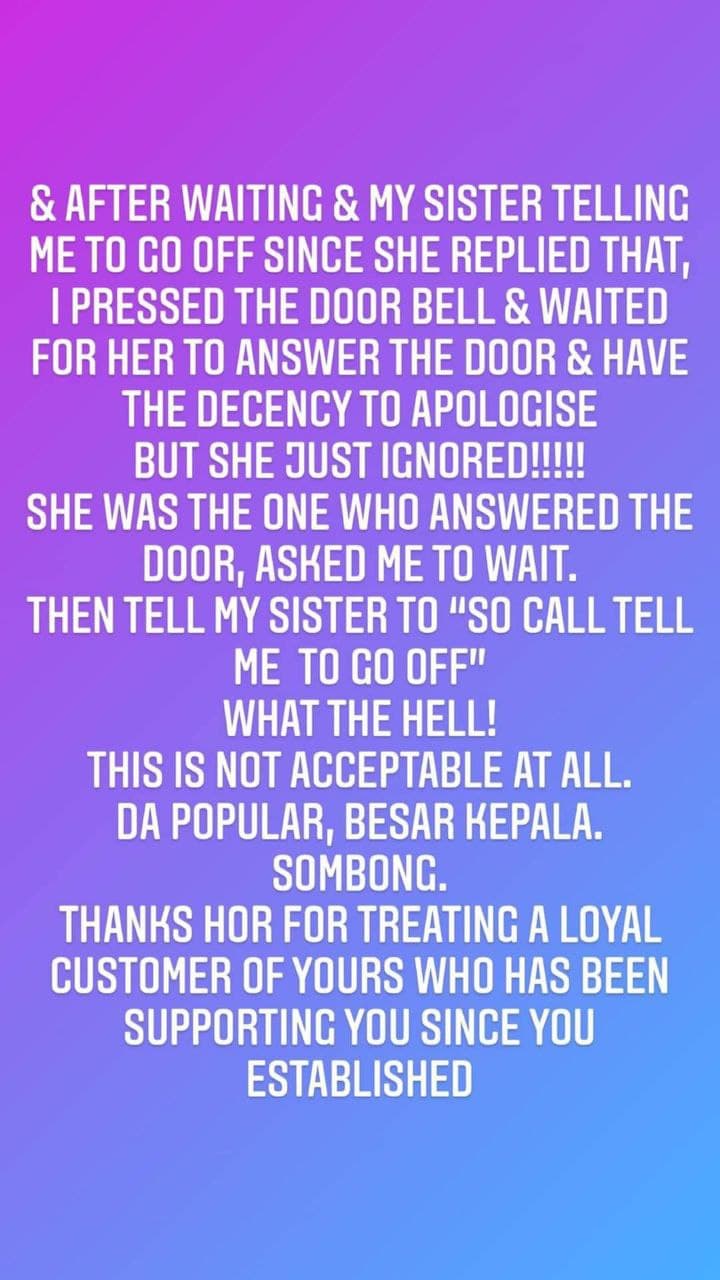 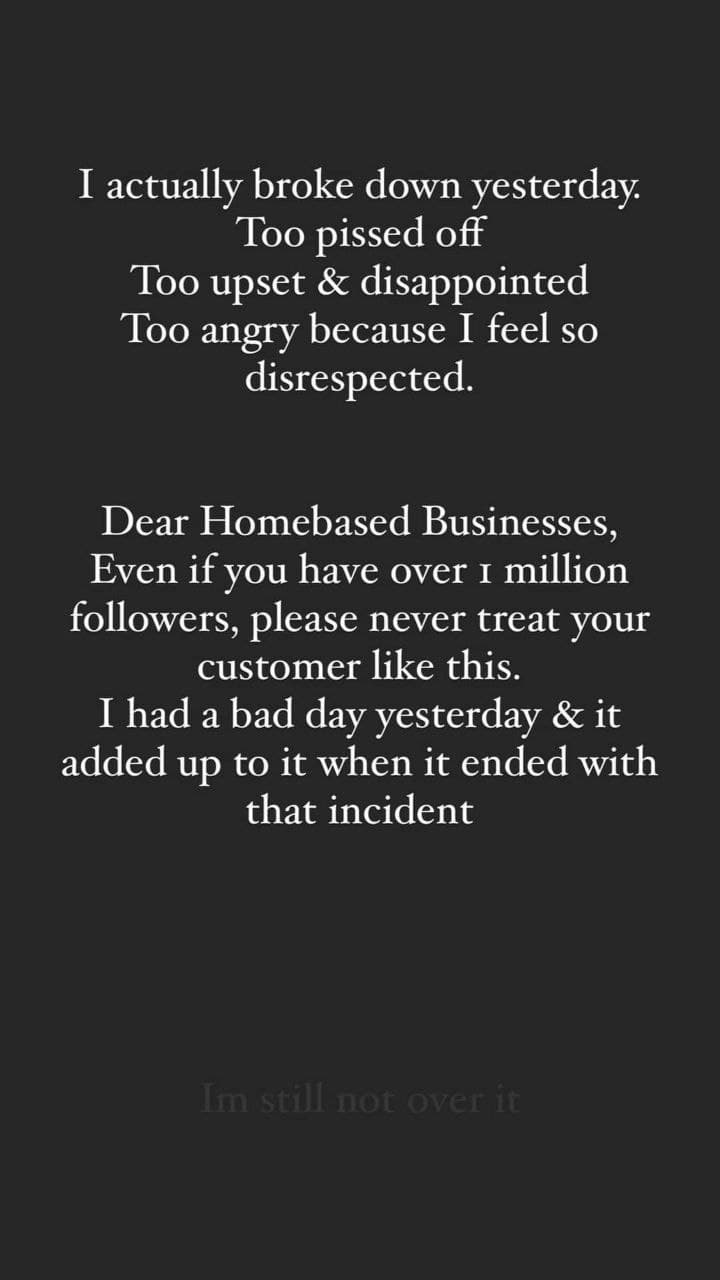 Bakery has apologised and refunded the customer

In response to media queries, Sugary Kneads said this particular incident happened in May 2021, and that the bakery has already apologised and given a full refund to the affected customer.

The bakery explained that its baker was trying to rush through a new batch of pastries while the customer was waiting outside her door.

The baker had apparently checked on the woman a while later, but she had already left.

Sugary Kneads also told Mothership that since the Facebook posts went viral, it has been receiving threats and hate comments from other customers.

"We will be lodging a police report on all the harassment we have received so far. Most of it is false accusations and threats.

We have made a full refund and apologise (sic) tremendously to those who were affected with our service.

We have done to the best of our ability as a company. We sincerely apologise to all once again."

The bakery added that some customers have threatened to "beat [them] up", and that they received these threats "almost every day, at least three times a day".

Here are some hate comments the bakery shared with Mothership.

Translation: "Go and close your business. Your mother's c***. You toyed with people, you're taking in haram money."

Translation: "Idiot, I'll beat you up."