Simu Liu, one of the biggest Asian names in the world right now, has been accused of talking bad about China in a 2017 interview he did for Canada, where screen shots of it have been recently reposted on the internet in China.

The Chinese-Canadian actor, who stars as the superhero in Marvel's Shang-Chi and the Legend of the Ten Rings, had made his comments about China during an interview four years ago when Canada celebrated its the 150th anniversary.

Liu's segment was part of the "What's Your Story?" series by the Canadian Broadcasting Corporation (CBC).

He appeared to have been interviewed about his experience being an immigrant, given that he did well in the country that adopted him.

Up to nine screen shots of Liu's comments in English and Chinese subtitles were posted on the social media platform Weibo by Diba, a Chinese nationalist account. Left China with parents when he was 5

Diba said on Weibo that the 32-year-old actor emigrated from Harbin city in China's Heilongjiang province to Canada when he was five years old.

This would place his year of emigration as 1994.

Liu regards himself as a Canadian, Diba claimed, and it was his parents who brought him on the journey.

His comments, as highlighted by Diba, apparently showed Liu explaining the reason for emigrating.

The subtitle read: "When I was young, my parents would tell me these stories about growing up in communist China. They lived in the third world where you have people dying of starvation."

His parents, he also supposedly said, felt Canada was a place to give him a better future. 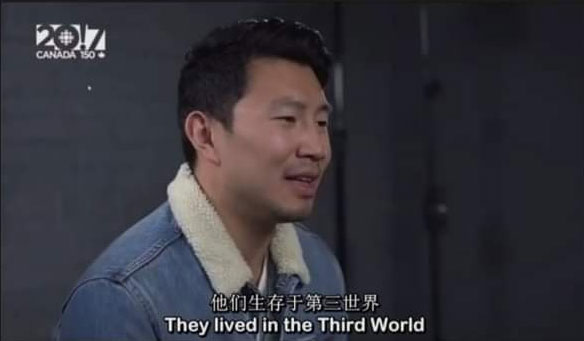 Liu's video interview can no longer be found

Interestingly, the video of the Liu's 2017 interview can no longer be found on the CBC website.

It is unclear when its removal happened or if it was in response to criticism from Chinese social media users.

Responses to the revelation that Liu had seemingly spoken ill of China in 2017 drew a spectrum of reactions from Chinese internet users, from condemnation to commiseration.

Those who came down hard on Liu accused him of belittling China.

They also questioned his motive of playing the Shang-Chi Chinese superhero role having left China in the first place.

Others who defended Liu said his claims reflect China's past history.

Comments that looked beyond whether Liu was right or wrong pointed out that the fault could also lie with the Chinese subtitles, as they did not match the English subtitles due to multiple embellishments.

An additional observation that could be made is that the grammar of the English subtitles appeared wrong.

For example, the portion when Liu said, "Where you have people dying off starvation", it should have been "of" instead of "off", and the Chinese subtitle for this part inaccurately read, "There are many people dying of starvation".

The Straits Times also reported that one Weibo user pointed out that the original translator of Liu's comments has already apologised for the errors.

The user also said there could be an ulterior motive of inciting hate as some accounts were still using the screenshots with the inaccurate translations of Liu's remarks.

The Shang-Chi movie grossed US$94 million (S$126.2) over Labour Day weekend in the U.S., and has broken even after factoring in global revenue, boosted by strong openings in markets like Hong Kong.

The movie is only in its second week of its run.

However, Chinese censors have yet to approve the movie and the schedule for its mainland China release is not known.

Shang-Chi is based on a comic series that Marvel first published in 1972.

In the original story, the protagonist Shang-Chi was the son of Fu Manchu, a villainous character created in 1913.

Fu Manchu made used of plenty of anti-Asian stereotypes and became a symbol for racist “yellow peril” fears in the U.S. that suggested the rise of Asia would pose an existential threat to the West.