Putien at Kitchener Road has been awarded one Michelin Star in each edition of Michelin Guide Singapore's restaurant selection since 2016.

The group behind the restaurant has now launched an "express food service" concept named Chop Chop, after the colloquial phrase describing "speed".

Its first outlet is now open at UTown in the National University of Singapore, a location picked to help the brand "be relatable to the new generation of diners," according to Putien’s vice-president Fong Chak Ka.

There are also seafood and meat dishes on offer, such as Putien's Sweet & Sour Pork with Lychees (S$7.90), and customers have the option of topping up S$2 to have it with rice, a starter dish, and homemade juice. 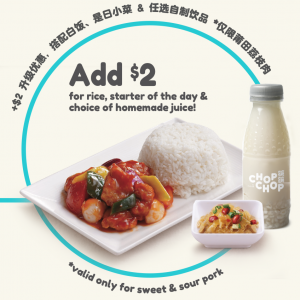 Smaller items such as Shredded Pork with Sesame Bun are priced at S$2.90, while a piece of Deep-fried Pork Trotter with Salt & Pepper costs S$4.90.

Putien said cutlery and packaging used at the outlet are biodegradable or made with recycled paper, as part of its sustainability efforts.

The outlet is also offering a 10 per cent discount for patrons who bring their own box for takeaway.

There is also a limited-time opening special, where diners get a complimentary starter and drink with every main course purchased.

It seats up to 50 diners, and also offers takeaway, as well as delivery via various platforms including as Inline, Oddle, Foodpanda and GrabFood. The group plans to expand to other campuses in Singapore, and overseas.