It is worrying that the Progress Singapore Party (PSP) is calling for policies that are not only short-sighted, but also protectionist and harmful to Singaporeans, Manpower Minister Tan See Leng said in Parliament on Sep. 14.

Speaking in support of the motion by Minister for Finance Lawrence Wong on securing Singaporeans’ livelihoods, Tan said that the PSP's equivocation about free trade agreements (FTAs), along with the racial connotations underlying the issue, had been misleading and dangerous.

Tan characterised PSP's stance as such:

"It seems the PSP would want us to take a more effortless route – and simply target the '400,000 foreign PMETs' they say are here...Can the PSP explain how all of its suggestions will not dampen Singapore’s attractiveness to foreign investors and cause poorer outcomes for the vast majority?"

Rather, the solution is to invest heavily in developing Singapore's local workforce and ensure that foreigners complement rather than displace local labour, he added.

So why is the PSP being short-sighted & protectionist?

1. PSP's rhetoric have had an effect on Singapore's competitiveness ranking

Tan noted that Singapore had fallen from first to fifth in the 2021 Institute for Management Development (IMD) World Competitiveness Ranking.

He said that while this was partly due to Covid-19 having a greater impact on smaller economies than larger ones, Singapore had also slid down particularly on its  openness towards global trade and talent, in rankings regarding "attitudes towards globalisation", "availability of skilled labour" and "immigration laws preventing companies from hiring foreign labour".

Tan then addressed his statement to Leong and the PSP, saying:

"What he and his party spew, attacking CECA and FTAs and foreigners in general, has an effect on IMD’s assessment, and on business sentiments, both here and overseas. Investors watch and wonder how many other Singaporeans feel this way? Has Singapore become less welcoming of foreign investors, of global talent?"

Stressing that Singapore could not take its economic competitiveness for granted, he highlighted that the ten biggest MNCs in Singapore alone had created around 30,000 local PMET jobs.

As such, "If they decide to leave, we would not be talking about recouping 'tens of thousands' of jobs, but about losing more of them instead," he said.

Tan added, "As a small country devoid of any natural resources, there are severe consequences if we turn inwards, lose our lustre as a regional hub, and cause companies leave our shores and take the jobs with them."

Tan also slammed Leong and the PSP with the following remark, "Mr Leong and his party thinks Singapore will forever be attractive to investors. Is there some magic water that draws global multinationals here, and that all this happens spontaneously?"

2. PSP has not mentioned that local PMET employment rate has grown at a larger rate than that of foreigners

Tan further noted that the PSP had been fixated on the increase in the number of foreign PMETs, arguing that locals had been displaced, and had lost out.

"(PSP) has painted a picture of widespread displacement based on the anecdotes it has heard," he added.

Tan then pointed out that the PSP had made no mention of the data on both local and foreign PMETs that the Ministry of Manpower (MOM) had published "regularly at fine granularity", which showed that the rate of local PMET employment had increased at a larger rate compared to that of foreigners.

Tan said that while the past ten years had seen an increase of 110,000 in EP and S Pass holders, the number of local PMET holders had increased by about 300,000. Even for sectors that have hired more EPs, such as finance, infocomm and professional services, the minister noted that while EP and S Pass holders in these sub-sectors had increased by 40,000 in the past ten years, the number of local PMETs had increased by almost four times, at 155,000.

Hence, this goes to show competition between locals and foreigners is not a zero-sum game, he concluded.

3. Increase in foreign PMET employment has not caused a rise in local unemployment

This led to Tan's next point that the increase in foreign PMETs has not caused the local unemployment rate to rise.

Outside of crises, the unemployment rate has remained constant at about three per cent or lower.

"Few countries have achieved unemployment rates as low as this," he said.

As for the long-term unemployment rate involving those who have been looking for a job for at least 25 weeks or about six months, this has remained below one per cent. Tan also said that Singapore is an immigrant nation, and the openness of our society is one of our core strengths.

He also deplored "drawing a line" between Singaporeans and PRs, as the latter have put down roots in Singapore, have family ties here and contributed to the economy too.

4. PMET job vacancies and the local median salary have been on the rise

This led to Tan's next point that the number of PMET job vacancies has been on an upward trend since 2010 and that it has been hovering around 30,000.

The vacancies include 4,300 unfilled PMET jobs in the infocomm sector, 4,100 in the finance sector, and 2,700 in professional services, among others. 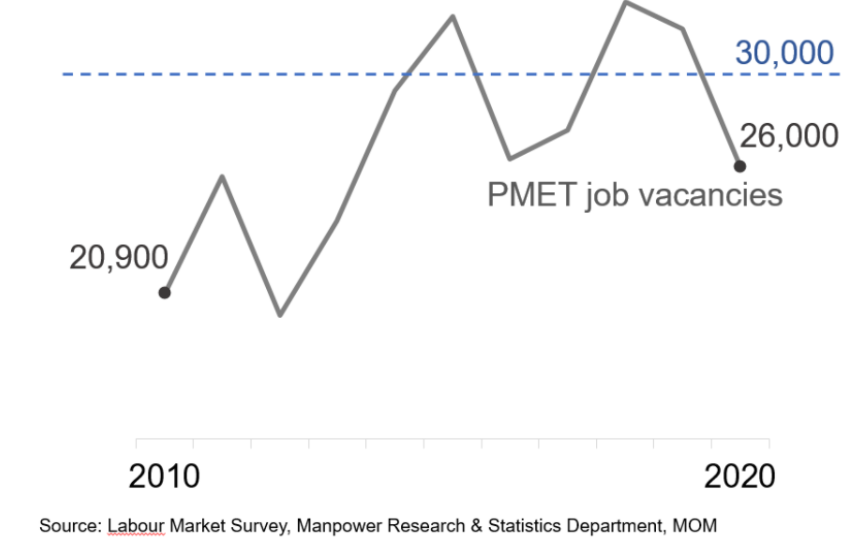 The minister then posed the following question:

"If every additional foreigner results in one less opportunity for a local, why are there so many unfilled vacancies? Surely these vacancies should have been long filled?"

Tan also pointed out that the proportion of Singapore's workforce in PMET jobs was among the highest in the world, at nearly 60 per cent, up from 30 per cent in the early 1990s.

"(This is) a very different picture from the dire situation that the PSP has portrayed," he said. "To hear Leong, you’d think it has been midnight in Singapore for 30 years."

During that exchange, Leong repeatedly asked for "more data", including data on Intra-Corporate Transfers (ICTs). He claimed that without data, he could not give a proper opinion on CECA and FTAs.

However, Tan had already given numbers on ICTs in his ministerial statement in July 2021. Here, he gave even more ICT data, over the last five years.

Tan pointed out that the PSP has filed a slew of data requests, but because not everything they asked for was given, they make sweeping statements that there is "no credibility" in any of the government's statements.

"Let me be very clear. When it comes to data on our local workforce, we publish it regularly, at a high level of granularity, and this is in line with international standards, but it seems the PSP is not aware of this."

He cited an example in July of a Parliamentary Question that the PSP filed, even though it was already publicly available. Nevertheless, he told Hazel Poa of the PSP where to look.