Ishiro, a Japanese fusion donburi chain, has come forward with a public statement and apology, after it emerged that various food outlets had been sabotaged — allegedly by Ishiro employees — with bad reviews, negative comments, and fake orders.

The acts of sabotage were revealed by Japanese restaurant Mentai-Ya Japanese Cuisine.

One of the issues highlighted by Mentai-Ya involved a customer approaching them on Facebook, with complaints about the quality of food and service at its Sengkang outlet.

The complaints were about service, and the food taking a long time, but Mentai-Ya said its CCTV footage showed a different story.

Regardless, Mentai-Ya agreed to refund the customer's order via PayLah!, only to discover later that the customer's phone number was the same as one listed on an online job ad with Ishiro's Oddle website in the description. 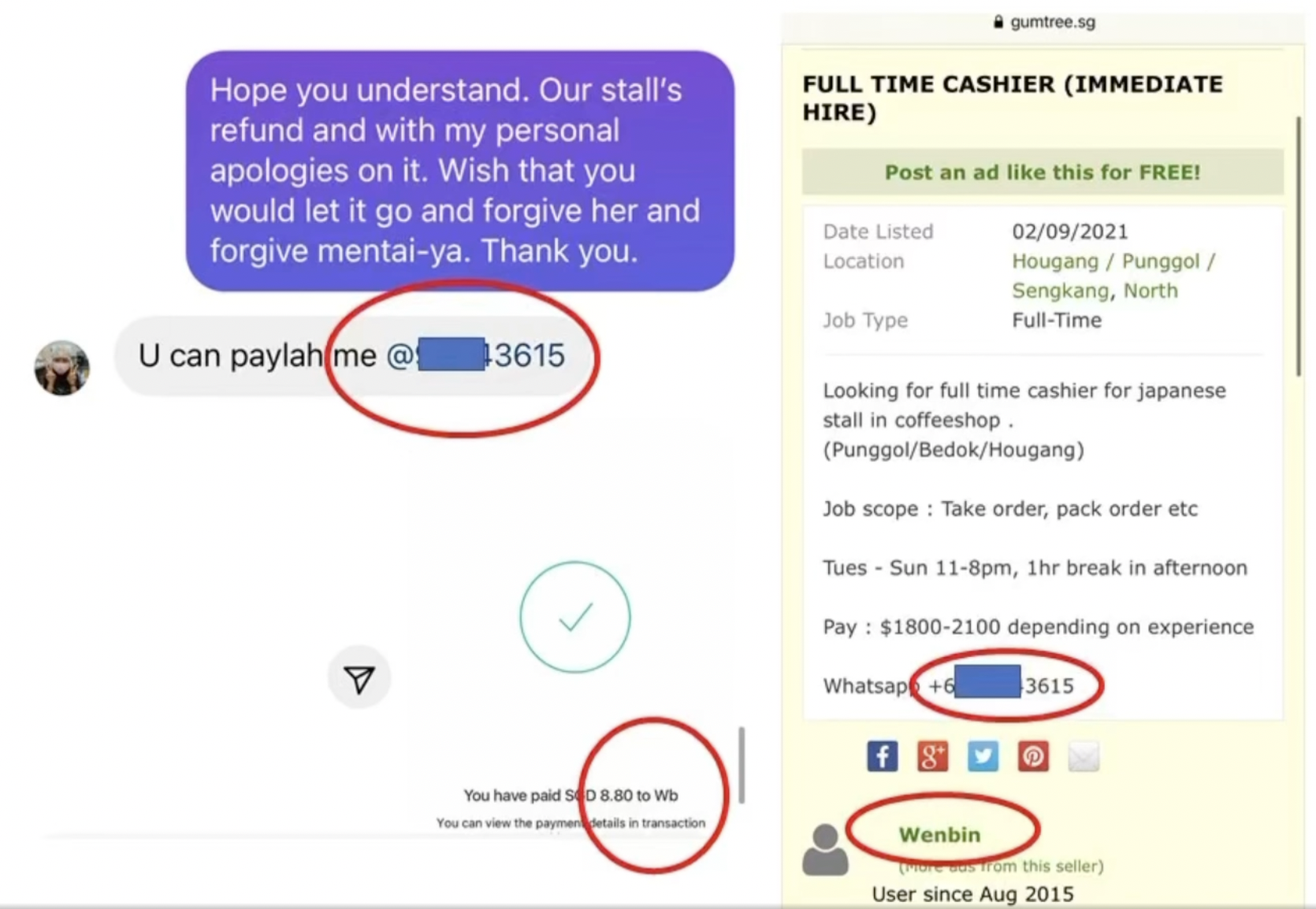 Mothership was able to locate a similar job listing from the same user, and found that the phone number corresponds to the nicknames "Ishiro SP" on PayNow, and "Ishiro Punggol" on the PayLah! e-payment service.

Some of these reviews came from an account with the name "wenbin chua" — the same name on the job listings for Ishiro.

Others came from "Eunice" or "Eunice Neo", as well as "Deon Goh" — names which apparently appeared as the names of cashiers on receipts that Mentai-Ya collected from Ishiro's outlets

Reviews posted by "wenbin chua" and "Eunice Neo" have been taken down, while those by "Deon Goh" are still available online.

Ishiro acknowledged its role in the controversy in a statement on its social media pages on Sep. 8.

The statement said that "a young, immature employee" had indeed posted Google reviews of Mentai-Ya using "multiple google accounts (which is not illegal)".

Ishiro added that "that is his personal issue and it has nothing to do with Ishiro".

Nonetheless, it sought to explain its employee's acts by saying that the reviews were posted in response to the employee's "unsatisfactory" experience at Mentai-Ya.

Ishiro also said that "he has patronised mentai ya a total of 3 times", and that he had visited "as a paying customer who is staying nearby".

It later added in a comment that the employee has resigned. That comment also acknowledged the involvement of Deon Goh, who had been identified by Mentai-Ya as the owner of the company behind three Ishiro outlets.

It said that the reviews from Goh were made from his personal account, "purely out of personal opinion" and with "no intention of defaming other businesses".

Ishiro takes issue with Mentai-Ya looking into its employees

Ishiro's statement also took issue with the way that Mentai-Ya publicised the issue.

It concerns included how Mentai-Ya took photos of an Ishiro employee and identified their "personal social media".

Mentai-Ya had apparently done so to try to prove that the same person(s) who worked at Ishiro were also responsible for multiple complaints and negative reviews.

Ishiro said that these acts were "really unfair" and "looks more like an act of bully".

Ishiro's statement comes under fire, gets taken down

The statement quickly came under fire from netizens, whose comments were apparently deleted before the statement itself was taken down.

However, screenshots of the statement were captured by Mentai-Ya, as well as online forum users.

A second apology was posted the next day, on Sep. 9.

Ishiro said that "unfortunate events" had caused "harm" to Mentai-Ya and other businesses, and offered a "sincere apology" to those affected.

It also apologised for a previous statement and "the approach" taken.

"It was not done right and we assume full responsibility for it," said the statement.

Ishiro added that the company took "full responsibility" for the employee's actions.

"We will ensure that such actions will not be tolerated in the future," it said, adding that it "personally issued an apology to Mentai-Ya and all other businesses that were affected". 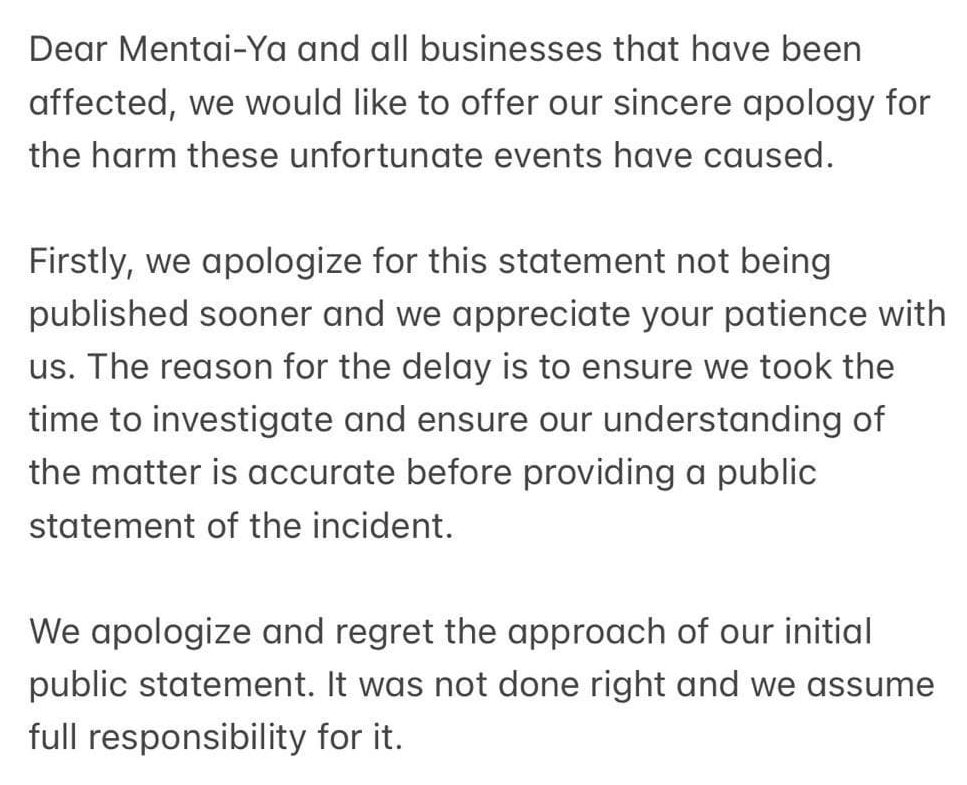 This second apology was also panned by commenters, however.

This came after the post attracted comments from those who saw Ishiro's act of identifying a single employee as an attempt to pin the blame on a scapegoat.

Others questioned why Ishiro deleted its earlier statement and accused it of trying to "hide the truth".

Massive blowback against Ishiro came in the form of negative reviews of its four outlets at Punggol, Bedok, Timbre+, and Nanyang Polytechnic.

It appears that all but one of Ishiro's outlets have been removed from Google listings, along with their reviews.

The remaining listing, for the Nanyang Polytechnic outlet, has apparently had some reviews deleted.

It now has just 9 reviews, most of which are positive.

Other acts of sabotage

Other acts of sabotage were brought to light by other affected eateries such as Jin Ji Teochew Braised Duck & Kway Chap and The Social Outcast. The profile apparently threatened that "social media will bring you down" and mentioned having eight Google accounts. 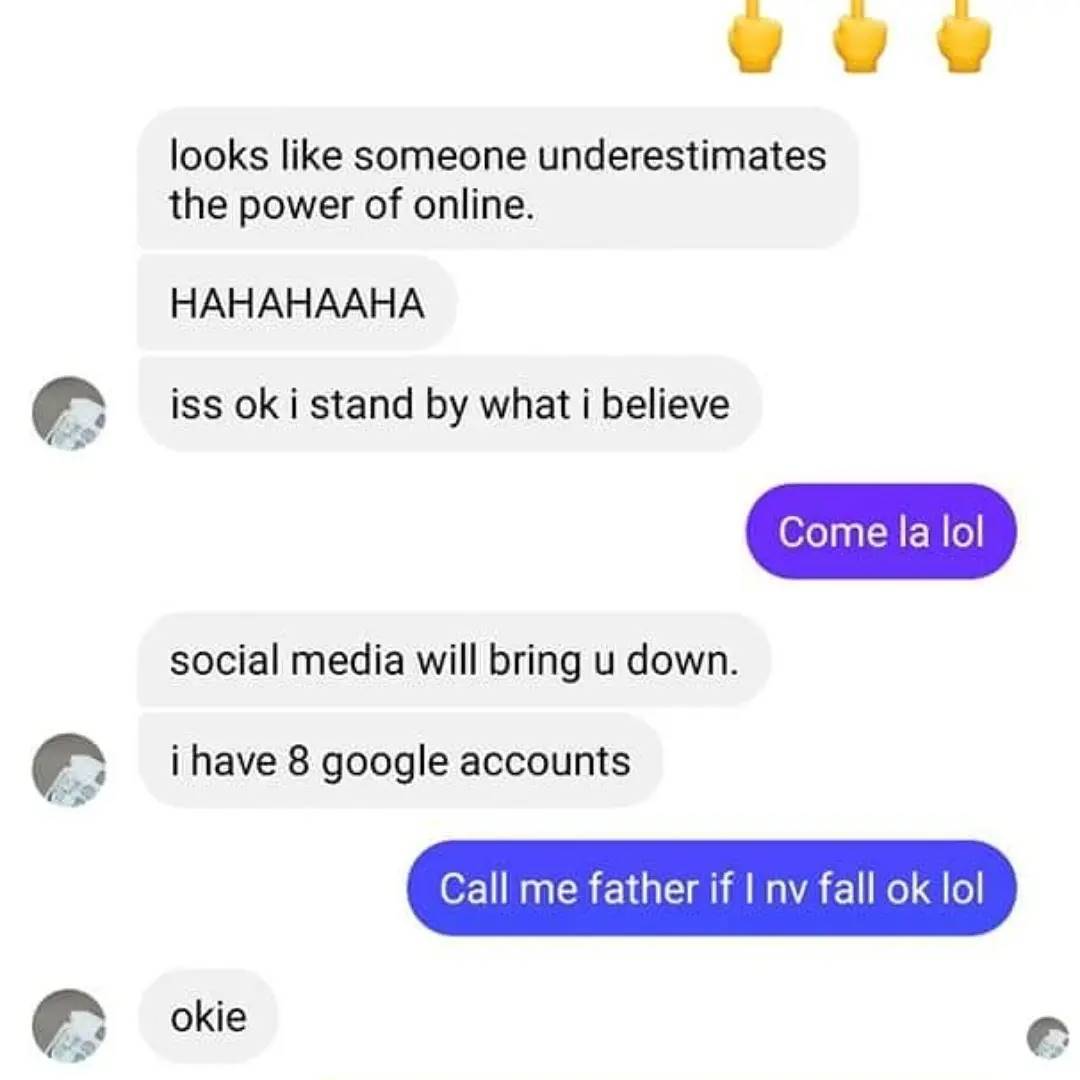 According to Jin Ji Teochew Braised Duck & Kway Chap, negative reviews were then posted about the stall from various Google accounts, many of which were also responsible for writing negative reviews about Mentai-Ya.

The Social Outcast, one of the businesses which was also targeted by online trolls, took to Facebook on Sep. 9 to highlight how it was also targeted, saying that it had also received false reviews, with racist and degrading remarks from a Facebook user "C New Nib", whose name has since been changed to "C Bea Leave". 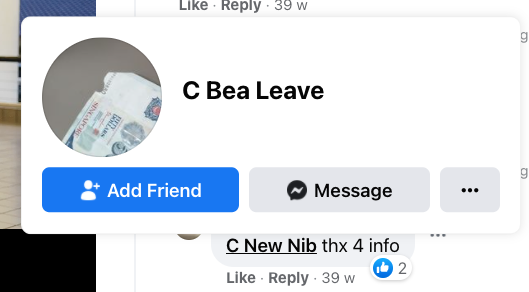 The Social Outcast also said in its post that Ishiro used to be its neighbour back at Bedok Marketplace.

However, it's unclear whether the Ishiro employee responsible for negative reviews of Mentai-Ya is also behind the "C Bea Leave"/"C New Nib"/"C Bee Lif" account.

That being said, the acts targeting The Social Outcast involved some of the same names involved in the sabotage of Mentai-Ya: Deon Goh and "wenbin".

Other negative comments appeared on a video featuring The Social Outcast.

While most of those comments appear to have been deleted, one made by Facebook user "D Goh" (whose Facebook profile URL is "https://www.facebook.com/deon.goh.9") criticised the food from The Social Outcast and is still online at the time of writing.

The Social Outcast also said that it had also been sabotaged by a customer by the name of "wenbin", who placed a large "cash on delivery" order via GrabFood and then became uncontactable. The Social Outcast explained that the customer who placed the order indicated Bedok Marketplace as the delivery location, before becoming uncontactable.

"To be honest, we should have known, but... we didn't think during the rush hours," it explained.

The Grab delivery rider ended up losing income due to the time spent resolving the matter with Grab.

The Social Outcast said that Grab has since taken action, however, after "wenbin" placed a second prank order using the same phone number.

The second time around, The Social Outcast was "more aware of the situation" and requested that Grab ban orders from that phone number.

The number used by "wenbin" for the prank orders apparently matched the number used in Ishiro's gumtree job posting, The Social Outcast said in its post.

The critical review, posted on Sep. 10 by a user called "Wen Kai", compared The Social Outcast unfavourably to another eatery, Ashes Burnnit.

However, The Social Outcast highlighted that it has been closed since May 30 this year in view of its relocation to a new space in The Grandstand at Bukit Timah.

Thus, the burger reviewed by "Wen Kai" could not have come from The Social Outcast.

"On behalf of the phantom burger ghost join that represents us, we apologise," wrote The Social Outcast dryly. Meanwhile, it appears that "Wen Kai" has reviewed only two other F&B establishments: Mentai-Ya's Tampines outlet (with a one-star rating), and Ashes Burnnit (with a five-star rating)

And in case "Wen Kai"'s choice of outlets to review wasn't suspicious enough, the review of Ashes Burnnit appears to feature a photo stolen from a food blog, "The Fat Guide". 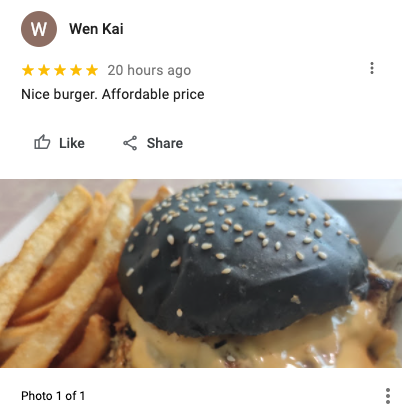 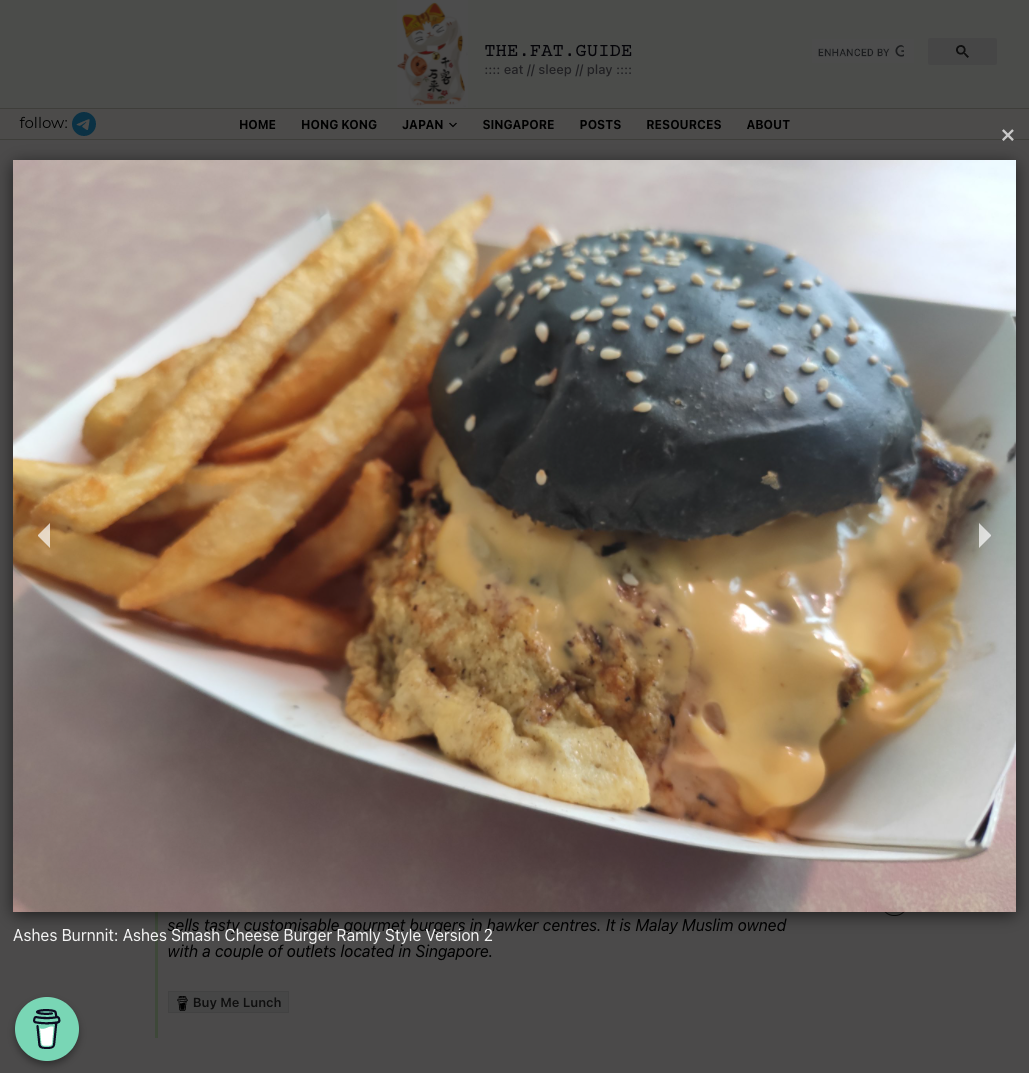