Groups of frenzied shoppers were seen rushing to purchase the newly released Apple iPhone 13 at a store in a shopping mall in Xi'an city, China.

According to local media HNR, the incident happened on Friday, Sep. 24, which was when American tech company Apple released its new iPhone.

Hundreds of shoppers had started queueing up outside Seg International Shopping Mall in the morning at around 8am, even if the mall wasn't open yet.

190 sets of iPhone 13 had reportedly arrived at a store in the mall that day, prompting the crowd of shoppers to rush to get their hands on the phones.

When the entrance to the mall finally opened at 10am, eager shoppers ran in quickly to try and secure their purchase.

If you’re not sure about Chinese addiction to a foreign brand like Apple, look at this Apple store literally mobbed w/ frenzied shoppers, trying to get their hands on iPhone 13/13 Pro on the first day of release in China. pic.twitter.com/VYiuJ7hvkv

However, due to security concerns arising from the mob of people, the shop decided to delay the sale of the smartphone sets, telling shoppers to come back at the next morning at 8am, and to queue up at the northern entrance.

Shoppers were warned of the limited quantity of iPhone 13 sets available at the store as well. 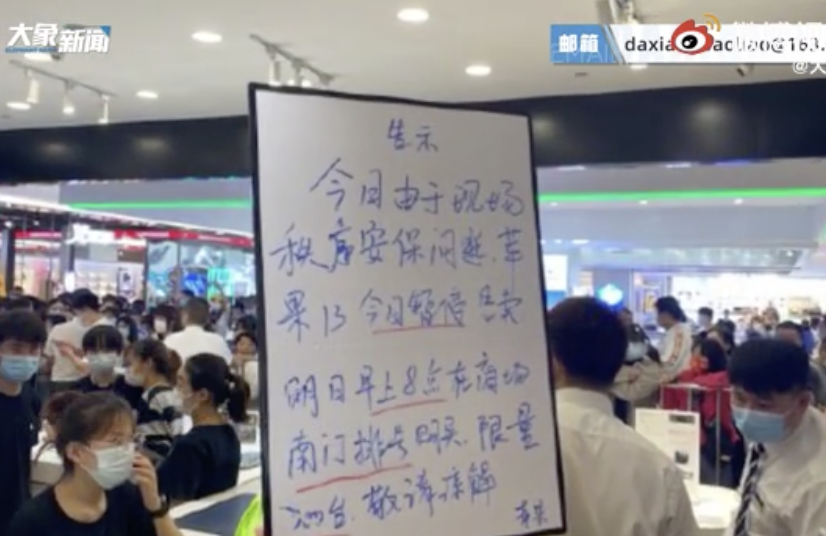 Although Apple iPhones have seen a drop in demand from Chinese consumers over the years, mainly due to its high price and the rise of domestic brands like Huawei and Xiaomi, which was perhaps boosted by the ongoing tensions between China and the U.S., the release of the latest iPhone 13 has seen a surge in demand in China again, despite scant differences from the previous lineup.

Certain colours of the new iPhone series have sold out in less than 10 minutes on Friday, Sep. 24, with the high demand crashing the official Apple website, Global Times reported.

Stocks ran out quickly on Chinese e-commerce platform JD.com as well, with no products remaining on its site on Saturday morning, Sep. 25.

The number of pre-orders placed is overwhelmingly high too, with more than five million people making advanced reservations for the phones on JD.com and Tmall.com, another popular e-commerce platform.

Several Chinese social media users have taken to microblogging site Weibo to comment on the incident, with many expressing their disapproval at what they saw as unnecessary enthusiasm for the iPhone 13.

A few others speculated that the demand for the new iPhone was due to its relatively lower price, and that many shoppers were actually paid to queue up and buy the phones for those who don't wish to make their way down to the store in person.

Some also criticised the shoppers for "kneeling down" before an American brand -- a man was seen outside an Apple store yelling for people to support Huawei instead -- and proclaimed that they will only use phones made by the domestic tech giant.