The Urban Redevelopment Authority (URA) has responded to Singapore actor Nick Mikhail who expressed his dissatisfaction on Instagram at how the authorities conducted an inspection at his place of residence recently.

Mikhail took issue with how the officers entered his home without a warrant, which saw a male officer enter a room with his wife even though a female officer was present, as well as how he felt his privacy was invaded as the female officer was looking at a photo frame while in the premises.

The post with a CCTV footage garnered over 60,000 views in a day.

The inspection was carried out at his residence when his wife was alone and feeling under the weather after taking her second dose of the Covid-19 vaccine, Mikhail said.

In response to this incident, URA said in a media statement that they have contacted Mikhail to address his concerns and would like to provide clarification on what happened.

URA said that agencies had received repeated complaints from residents of the landed housing estate that some residences, including Mikhail’s, were having gatherings with more than the permitted number of visitors since late June this year.

There were also complaints about the noise generated from the alleged gatherings.

As such, officers from different agencies, including the police, were deployed to the estate to check for potential infringements of Covid-19 regulations, as well as noise.

No warrant is needed for safe distancing enforcement officers to do such inspections, URA said.

"Safe distancing enforcement officers are empowered to enter, inspect and search various premises, including residences, without a warrant, to check whether the Covid-19 regulations are being complied with."

But the agency also added that officers will calibrate their approach for the premises, based on the circumstances of each case.

What happened at Mikhail's house?

URA explained that there are six officers involved: Three were safe distancing enforcement officers from URA and the other three were police.

Upon arrival at Mikhail’s residence, the officers observed that the gate was wide open and that the lights in the house were turned on.

They also spotted two cars parked outside the residence, "and thus proceeded to ascertain whether there were any visitors in the unit, and if the numbers were "within permissible limits".

The officers entered the car porch of his residence and knocked on the door of the house.

They identified themselves and explained the purpose of their visit after Mikhail's wife opened the door.

URA said she agreed to allow the officers to enter, and escorted them around the house to facilitate their checks.

All three of URA’s safe distancing enforcement officers, including a female officer, followed Mikhail's wife "in a single file" for the inspection, and were mostly in each other’s line of sight.

Towards the end of the inspection, Mikhail's wife went to retrieve her identification card from the next room. She was followed by a safe distancing officer who took down the details. A police officer and the female safe distancing enforcement officer joined them in the room shortly after, URA said.

According to Mikhail's CCTV video, the two officers entered the room about one minute later. 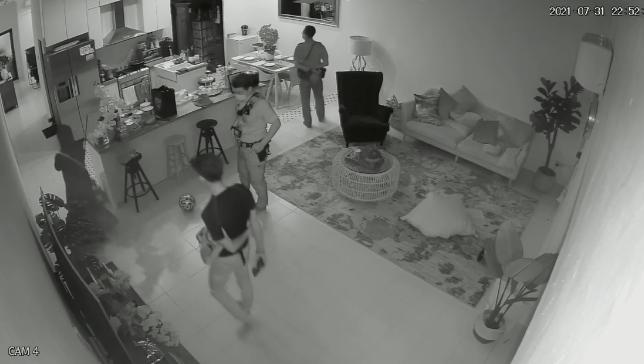 The inspection lasted less than 10 minutes, according to URA, and there were no other persons found in the house.

URA said the safe distancing enforcement officers and police officers were "polite" towards Mikhail's wife and "treated her with respect" throughout the inspection.

On Aug. 2, Mikhail first put up a post to apologise to the National Environment Agency (NEA) as he had tagged them and wrongly said they were involved in the incident in his earlier posts.

In a subsequent post on Aug. 2 night, Mikhail responded to this incident again.

He said that while he understood that the officers were doing their job and a warrant might not be needed, he did not agree that it is appropriate for the officers to enter the premise of his residence, referring to the car porch, without pressing the door bell even though the gate was open.

He also expressed discomfort over how a male officer followed his wife who was wearing her pyjamas into the room alone even though there was a female officer who ended up looking at his personal items.

Despite having spoken to URA, Mikhail still felt that the protocol was not well followed by officers involved in the inspection of his residence.

He said he felt "disappointed" that the incident was not documented on the police's body camera as the police with the body camera did not enter the house.

He said in the video that the intent of his video is to raise awareness on this incident and hope the officers can be better trained for such situations.

Mikhail also said that he will lodge a complaint against the URA officers.

Here's his response in full: