A teenager in Malaysia has gone viral on TikTok for uploading a video of her way of eating coconut flesh — by dipping it in sushi soy sauce and wasabi and proclaiming it tastes like "sashimi".

I tried it to find out.

On Aug. 1, the TikTok creator Rachel posted a video of her adding wasabi and soy sauce to coconut meat and then eating it.

"I promise you this tastes like sashimi," she wrote in the video, adding that she has been eating it since she was young.

The video has been viewed more than 143,000 times, with many commenters reacting with horror and others chiming in with their agreement that coconut and sashimi have similar textures.

It appears that Rachel isn't alone in her journey of eating coconut "sashimi".

Coconut "sashimi" is also suggested by some blogs to be a good vegan substitute for sashimi.

Curious about whether coconut "sashimi" really is all that it's made out to be, I decided to try for myself.

First, I gathered my ingredients. (I also got some salmon sashimi so that I could do a side-by-side comparison of the two. And also because I like sashimi.) Cutting open the coconut proved a bit harder (literally) and messier than I expected...

But once the coconut was open and the flesh was scooped out, it was time to start the taste test. 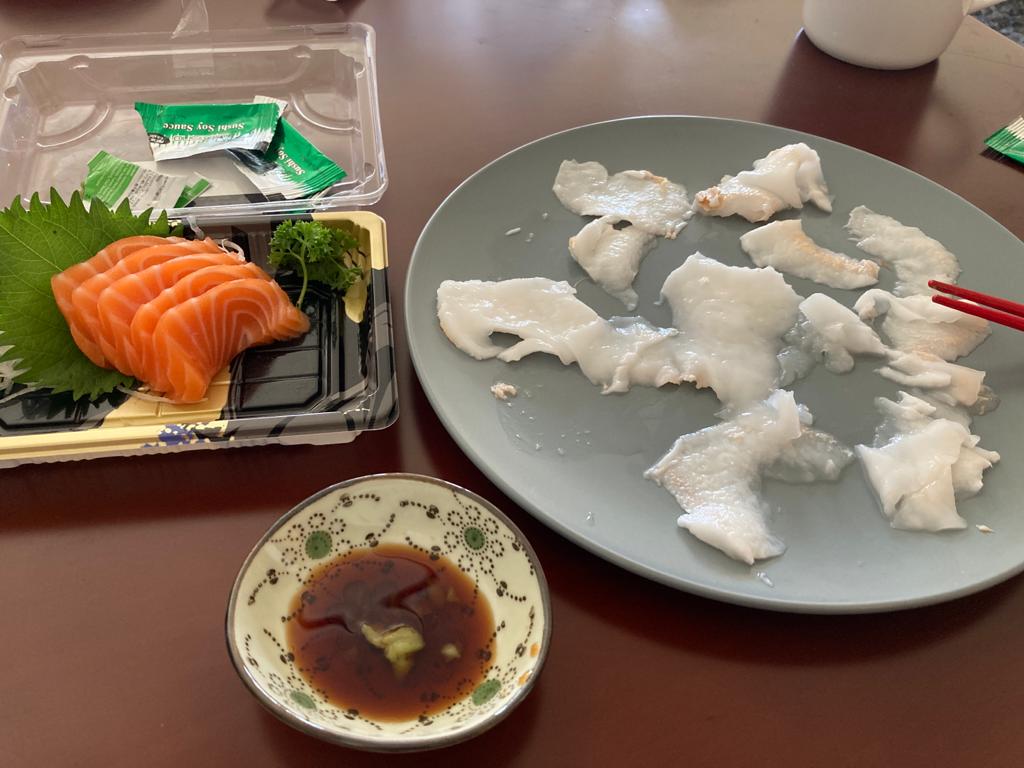 I was honestly pretty sceptical about how the coconut would taste dunked in soy sauce and wasabi.

I love fresh coconut meat for its refreshing and slightly sweet taste, so I figured that the salty and spicy taste of the dipping sauce wouldn't mesh well with it. 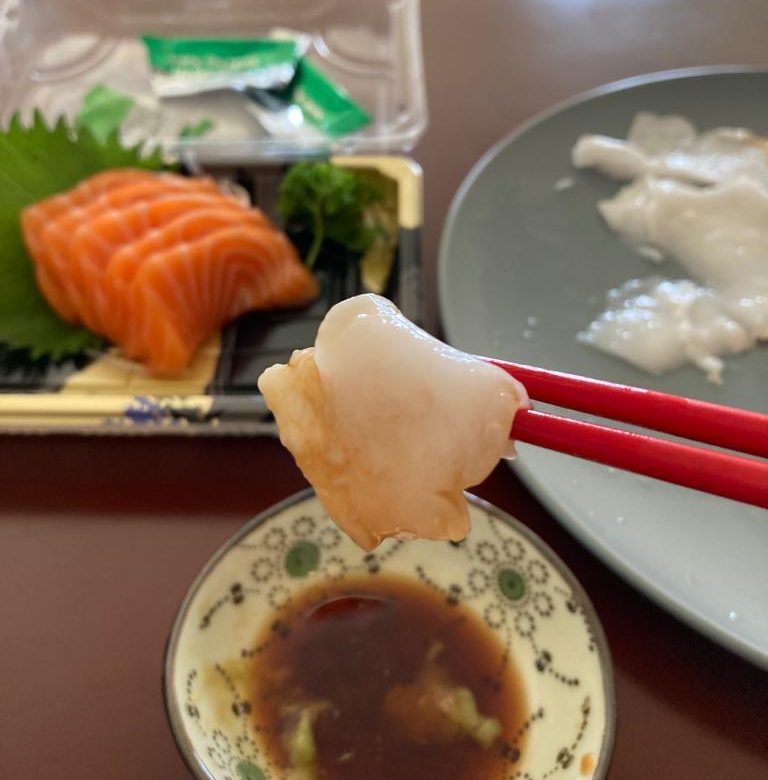 I was surprised to find that it actually tasted really good, though.

The soy sauce and wasabi masked the sweetness of the coconut, so that I could only taste the texture, which has a soft and slippery texture, similar to raw fish.

When I had a bite of the salmon sashimi, though, I could definitely taste the difference between the two. The salmon sashimi was much thicker than the coconut meat slice, and the salmon taste came across strongly after my second or third chew, whereas the coconut "sashimi" — surprise, surprise — did not taste like salmon at all.

Overall, I'd say that — although I'm no expert on sashimi — coconut "sashimi" is an interesting, tasty, and plant-based alternative to cheap sashimi.

Oh, and also it's a lot more affordable; S$4 for a whole plateful of coconut "sashimi" and a big bowl of coconut water to wash it down, compared to S$10.60 for five slices of salmon sashimi. (I ordered them on a food delivery platform because I didn't have time to go out to buy them.)

Still, it's definitely not the same as sashimi, and sashimi lovers will probably still want their fill of fish. But it's worth a try.

Top photos via TikTok / @blurluke and by Jane Zhang.