A video posted by the Malaysian Army during Singapore's National Day Parade (NDP) has been making its rounds on social media and messaging apps.

The video, made by the 10th Parachute Brigade (10 Para), an elite airborne unit within the Malaysian army, was posted on Saturday (Aug. 21).

Singapore's NDP to celebrate its 56th year since independence was postponed to Aug. 21 due to Covid-19 restrictions.

The video shows the commander speaking to a group of soldiers in English, during what appears to be a military briefing. It was also subtitled in English subtitles.

The commander, named Brigadier General Khairul Azmizal Ahmad Natal by Malaysia Military Times, said to the unit that after they are "dropped behind the enemy line", they are supposed to "get the affiliation assets and units to support the LPBG (Leading Parachute Battle Group)".

Should they successfully secure the "two crossing sites", there will be "nothing" to stop them from "punch(ing) through direct into the heart of enemy centre of gravity", he further said.

They are expected to face "a tough, stubborn enemy", but the Malaysian forces will nevertheless "fight to the last drop of blood", he said.

"By hook or by crook, we defend, we secure, and we hold the crossing sites," he said, adding that it's a "do or die mission".

The subtitles, however, read "seize" instead of "defend".

The video has set tongues wagging from across the causeway.

Home Affairs and Law Minister K Shanmugam pointed out the timing of the release of the video, as well as the use of English, on his social media platforms.

He further said the video "doesn't show much by way of tech or platforms or tactics", and appears to focus on "what the Commander says the Malaysian Army will do to the enemy".

Speaker of Parliament Tan Chuan-jin took to Facebook with his input on the matter too.

Commenting on Shanmugam's post and writing on his own Facebook page as well, Tan said he was "rather intrigued" by the video due to the "timing, context, setting, language".

He further invoked the past example of a joint airborne drop conducted by Malaysian and Indonesian troops "not too far away" from Singapore on Aug. 9,  1991, and pointed out that the operation was called Pukul Habis (Total Wipeout).

Responding to the concerns that were raised by Shanmugam , Nik Nazmi, a Malaysian member of parliament for the Setiawangsa constituency in Kuala Lumpur, tweeted "our Singaporean friend is worrying unnecessarily".

He further said that the 10 Para is based in Melaka, and claimed that the use of English in Malaysia's armed forces is "not as rare as [Shanmugam] thinks".

I think our Singaporean friend is worrying unnecessarily. The 10th Parachute Brigade is based in Melaka, and the use of English in Malaysia’s armed forces is not as rare as he thinks. Trust is important in friendship. @kshanmugamhttps://t.co/pOQcatRZv7

Discussions over use of English in video

The video has sparked debate among commenters from both countries.

While many Malaysian commenters praised the military for their hard work in defending the country, some others engaged with Singaporean commenters.

They asked them to "chill" for it was simply a "coincidence" that the video was released on the day the NDP was held. At least one Malaysian commenter was surprised to learn that the army does briefings in English too.

A commenter, however, defended the use of English in the briefing, saying that the language is important for in past instances, Malaysia has had difficulties communicating during joint exercises with other countries. 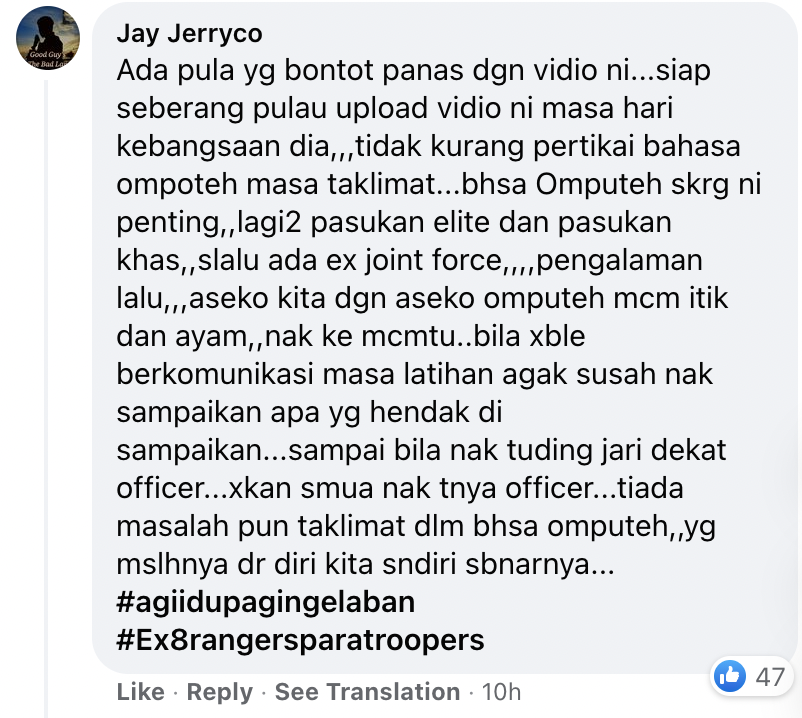