A stray dog in Singapore abruptly ran across a busy road on Thursday morning, July 22 just after 7am causing two cars to collide.

The accident occurred along Halus Link that goes past Punggol and Lorong Halus towards the Kallang–Paya Lebar Expressway (KPE).

In the dashcam video, the black dog was initially seen on the road shoulder beside the left-most lane scampering on the spot.

Without warning, it took off and ran into oncoming traffic in an attempt to get across four lanes.

As it made its way across, the cars could be seen suddenly braking hard in succession from left to right.

It appeared that the dog made it past the first two left-most lanes without incident, but it was along the third lane that saw one car plough into the back of another car.

A white SsangYong swung right to the next lane after hitting the back of a grey Volvo, which appeared to have braked in time to avoid turning the dog into roadkill.

At that moment that happened, the black dog could be seen running safely to the road divider to the right-most lane.

A motorcycle that was on the right-most lane had to brake hard to avoid hitting both the SsangYong and Volvo, and the stray dog.

The impact of the collision resulted in the bonnet of the SsangYong to become visibly damaged and dislodged, with debris strewn onto the road.

The accident appeared to be one of the worst nightmares come true for motorists.

They are sometimes confronted with the split-second decision of either proceeding ahead to hit the animal that appeared on the road without warning, or jamming the brakes and causing the car behind to rear-end your own vehicle.

The dilemma was articulated by some in the comments section of the video. 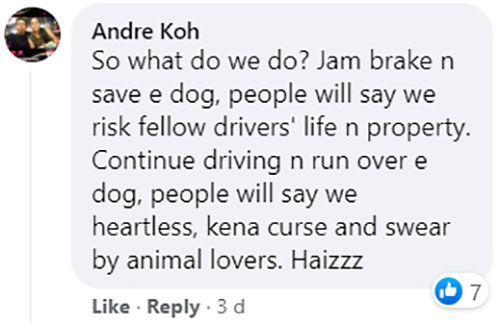 Animals getting hit by vehicles along major roads in Singapore have happened before.

In March 2019, a sambar deer ran across an empty Upper Thomson Road at night and straight into a motorcyclist.

In June 2018 a motorcyclist tried to avoid a sambar deer along Bukit Timah Expressway, which prompted a car and taxi to apply their emergency brakes.

The 46-year-old taxi driver was taken to the hospital after suffering cuts on his head.