A Facebook post put up on July 18, 2021 has been shared more than 3,000 times in five days as it claims that a flat located at Jurong West Street 81 is haunted.

The person who put it up goes by the name Cyrius Lee on Facebook.

The post said he heard from a friend about the flat with paranormal activity and wanted to share the anecdote to warn others about buying a cheap resale unit just because it is priced attractively.

Not only would the buyer take decades to repay the loan for a unit that can cost S$400,000, there are other unworldly concerns that do crop up.

The post even claimed that many Jurong West flats were built on top of cemeteries.

The post is unusual as it revealed the allegedly haunted unit's exact block number.

It only left out the exact floor of the unit.

By revealing the actual location, the story gains some credibility, but obviously does the residents of that block no favours, as they are probably wondering what hit them and being suddenly put under the spotlight.

A glance at the social media profiles of those who shared the post revealed that they are mainly the younger audience intrigued by such wild claims in good old boring Singapore.

The story was also couched as a warning by a recent home buyer, who sounded earnest in wanting to pass on some good advice.

The post contained five instances of hauntings, with the last one being the final straw that drove the family out of the flat.

1. A black shadow was seen moving about the corner of the room. One night, at about 2am, after watching TV alone and proceeding to bed, the homeowner heard a voice saying, "Mama!". Turning towards the direction of the voice, there was only the resident's wife and daughter sleeping soundly.

2. The homeowner's wife was washing her hair in the toilet while sitting on a stool when she felt someone or something give her a hard shove above her head. She was unable to see as she was shampooing, and called out to her daughter. But her daughter was in the hall playing the whole time.

4. While showering at about 10pm, a transparent figure like a human appeared. Terrified, the homeowner sprayed water in the direction of the entity but nothing happened.

5. The homeowner returned to the master bedroom to continue watching television. However, a pair of shining blue eyes appeared on the TV screen in the room. The switch for the television was not turned on and the plug was even pulled from the socket, but the eyes were still visible.

The family of three then rushed to the guestroom and locked themselves inside, with the wife and daughter crying.

The post then said the family moved out the next day and the house was subsequently sold at a loss to the next person.

Even though many people shared the post and commented on it, it did dawn on some that the retelling of the hauntings contained at least two glaring inconsistencies.

Man or woman narrating the story?

At the start, the post appeared to claim that the hauntings were experienced by a woman, as there was a mention of her husband spotting the Jurong West flat for sale and telling her about the deal.

But the experience of the hauntings then appeared to be narrated from a man's perspective, as it mentioned his wife and daughter.

Why was there a staircase in a four-room flat?

Another detail that appeared off was the mention of a "staircase" in the house in the third instance of a haunting, where a boy, aged about five, was seen in the homeowner's flat.

The post started off by saying the haunted unit is a four-room flat, which checks out because Block 840 consists of nine floors of four-room flats that was completed in 1992.

The appearance of a staircase in the unit can only mean the HDB flat is a maisonette.

So, how can this be?

It turns out, this true Singapore ghost story is an unoriginal, recycled piece, one that has been making the rounds on the internet since the mid-2000s.

The original ghost story was circulated as early as 2004, via email, and had appeared in some forums subsequently in 2006.

However, the funniest aspect and most glaring inconsistency about a haunted unit existing in Block 840 Jurong West Street 81 is the complete neglect to mention that the block is located diagonally opposite City Harvest Church, separated by Pioneer Road North. 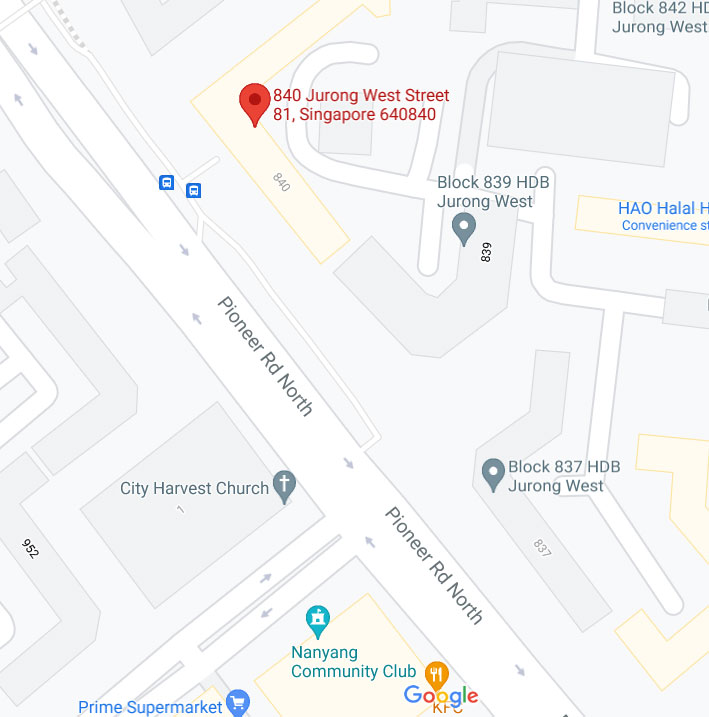 What was the original story?

The original story in the 2000s was actually about Block 407 or 547, depending on which version you read, but both of which are located along Jurong West Street 42.

The two blocks are 10 minutes apart on foot, and consist of HDB maisonette flats.

The original narrator was a man, who said his wife alerted him to a flat in Jurong West for sale at an attractive price.

The original piece contained the same hauntings, except they were split into six instances instead of five -- and specific to a maisonette setting.

The first standalone instance was the witnessing of a black shadow darting about at the stairs, while the homeowner was watching television in the hall.

This was clearly left out in the recycled piece.

The recycled piece fused the example of the dark shadow with the second instance, which was to hear a voice say, "Mama" -- which is understandable, because the story has been changed to fit a four-room flat setting that does not have stairs.

Moreover, the original story said the voice had called out "Papa", because the narrator was supposed to be a man.

Are Jurong flats built on top of cemeteries?

With regards to the claim that a lot of Jurong flats are built on cemeteries, the short answer is that this is likely not the case.

Jurong West is about 7km away from Choa Chu Kang Cemetery, while in the past, the now non-existent private Bulim Chinese Cemetery was located north of the Pan Island Expressway, off Jurong Road. The location of the private Chinese cemetery is at the present-day Tengah area, but not in Jurong West.

Why did urban legend exist in first place?

There are many reasons for urban legends to start, such as out of boredom and the cobbling together of different stories to create another that can barely pass muster, and then take root.

But the most nefarious reason this urban legend was circulated previously and now again is to apply downward pressure on property prices in those blocks mentioned.

For all we know, "Cyrius Lee" is just a homonym for "Seriously?"