KTV lounges are now in the spotlight for causing a new round of community Covid-19 outbreak.

The cluster linked to KTV lounges has grown to 88 cases in the past few days and the number is expected to increase.

The latest development in the Covid-19 situation has prompted the Multi-Ministry Taskforce to look into additional measures to curb the spread of coronavirus in the community.

Family karaoke not the same as nightclubs and KTV lounges

The karaoke businesses have taken a hit and were forced to close for over a year due to the pandemic situation, these include family-friendly karaoke outlets like Teo Heng KTV.

These family karaoke businesses do not have social hostesses and some do not sell alcohol too.

However, being placed under the same category as nightclubs and KTV lounges with social hostesses, they have been forced to pivot or close since last March.

Besides Teo Heng KTV, there are other smaller family karaoke businesses in Singapore that are struggling to stay afloat during this trying period.

With the fresh community outbreak, these karaoke businesses feel that they have been affected by the bad rep the industry might have gotten.

"We want to be separated out from them (Nightclubs and KTV with hostess). We feel that we have been dragged into the negative light because we are associated as a whole. We felt that we need to be heard. We are so small that we seem to be forgotten," Pea Shermain, managing director of 7th Heaven Ktv & Cafe, wrote to Mothership.

Another family karaoke outlet named Have Fun also expressed the frustration at being grouped together with KTV lounges.

Their Director named Flint said that the company has since received backlash and several inquiries on whether they are part of the KTV cluster.

He explained that the company has a different set of target audience as compared to nightclubs and KTV lounges.

He also added that it's natural for people to have social needs and so they had to turn to illegal means during this period when KTVs are generally banned.

Allowing licensed places like family karaoke can help to alleviate this need and reduce the need for people to patronise illegal businesses.

"It's hard to catch illegal set-ups and the "good boys", referring to law-abiding karaoke outlets, are struggling," Flint added.

Petition to be separated from nightclubs and KTV lounges with hostesses

A joint petition has since been created by nine family karaoke businesses to urge authorities to "separate" them from nightclubs and KTV lounges with hostesses.

These family karaoke outlets said that while they have tried various means to prop up their businesses, those are not sustainable in the long run.

"We have been waiting very patiently all these while, even though we have been suffering huge losses every month with no end in sight.

When government announced on 24th June that we are moving forward with plans to lift more restrictions, we see a glimmer of hope. But the latest news about the new cluster formed from a KTV Lounge due to a social hostess have trashed our hopes."

"It's been 16 months, without F&B customer base, professional chef team and kitchen equipment, the sudden pivoting to F&B can be a temporary solution but it's been too long," Flint added.

The petition wrote that karaoke businesses bore a high sunk cost with the purchase of equipment and renovation and it would be "painful and ruinous" for them to simply close down.

While they understand and agree that public safety takes priority, they hope the government can give them a chance to prove that karaoke businesses can be conducted in a safe manner if they can be separated from nightclubs and KTV with hostesses.

The petition stated that the target audience for family karaoke is different and their venue layout is also different with mainly small rooms so they can ensure no inter-mingling between different groups of customers.

The petition has since garnered over 2,000 signatures.

Here are some comments left by supporters: 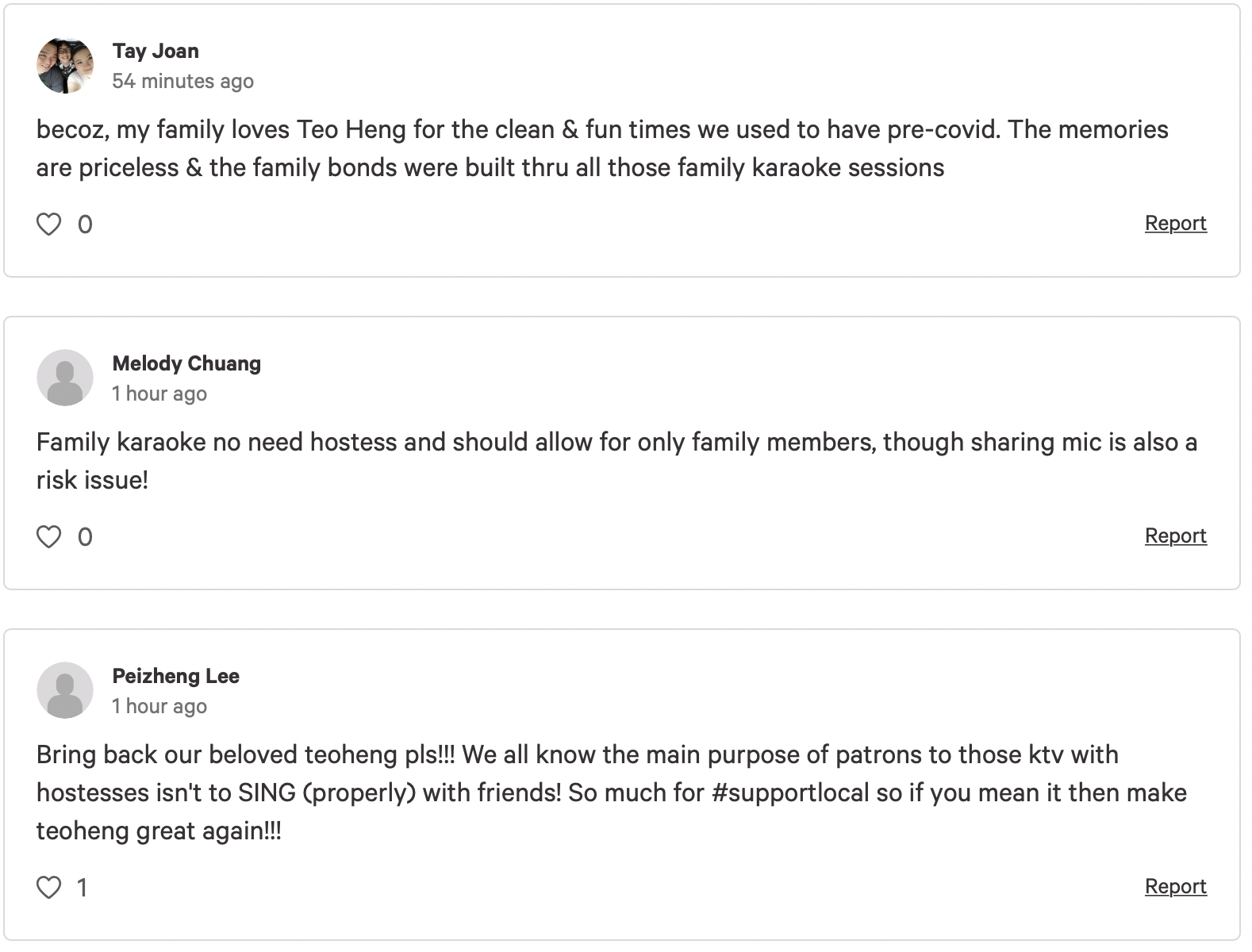 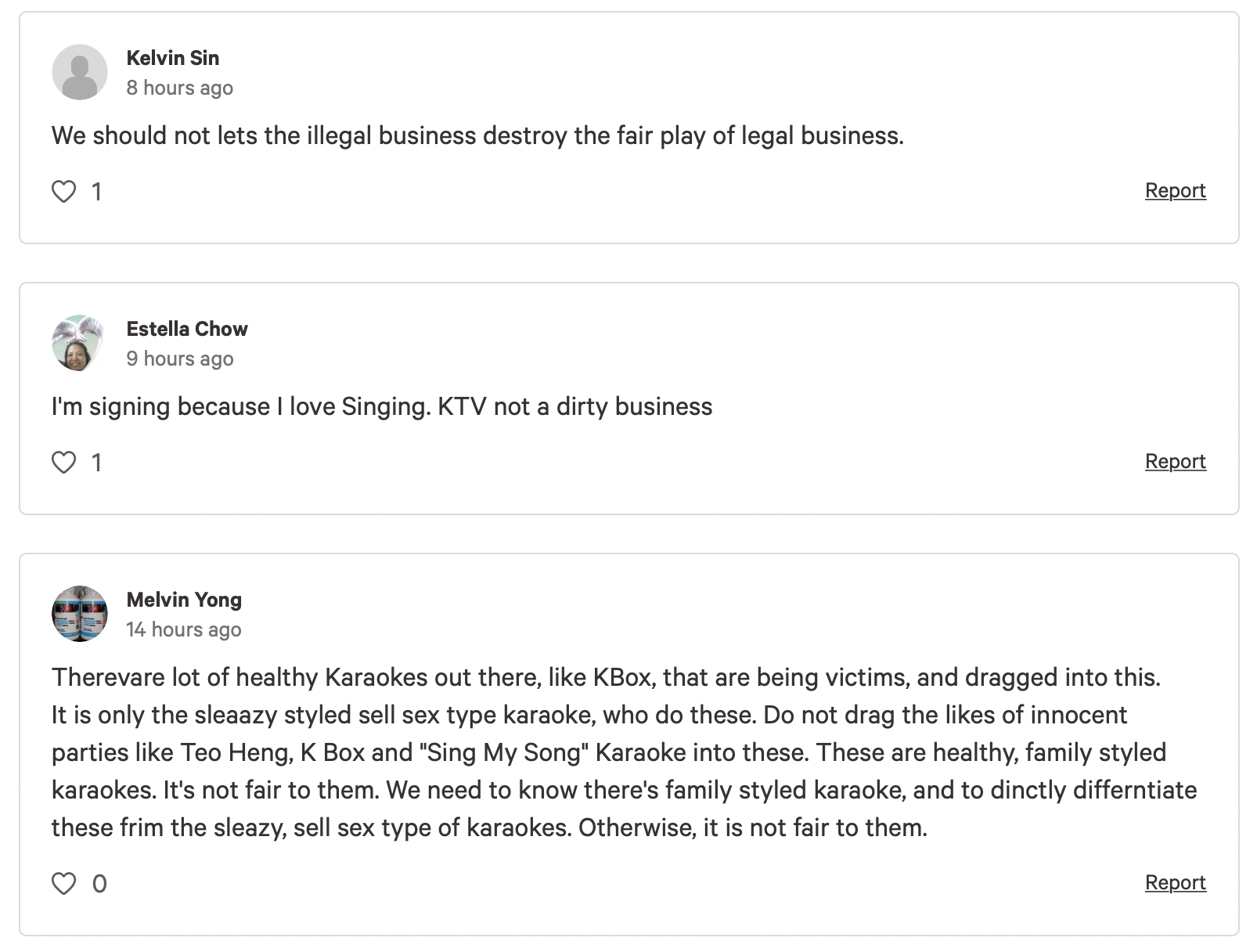 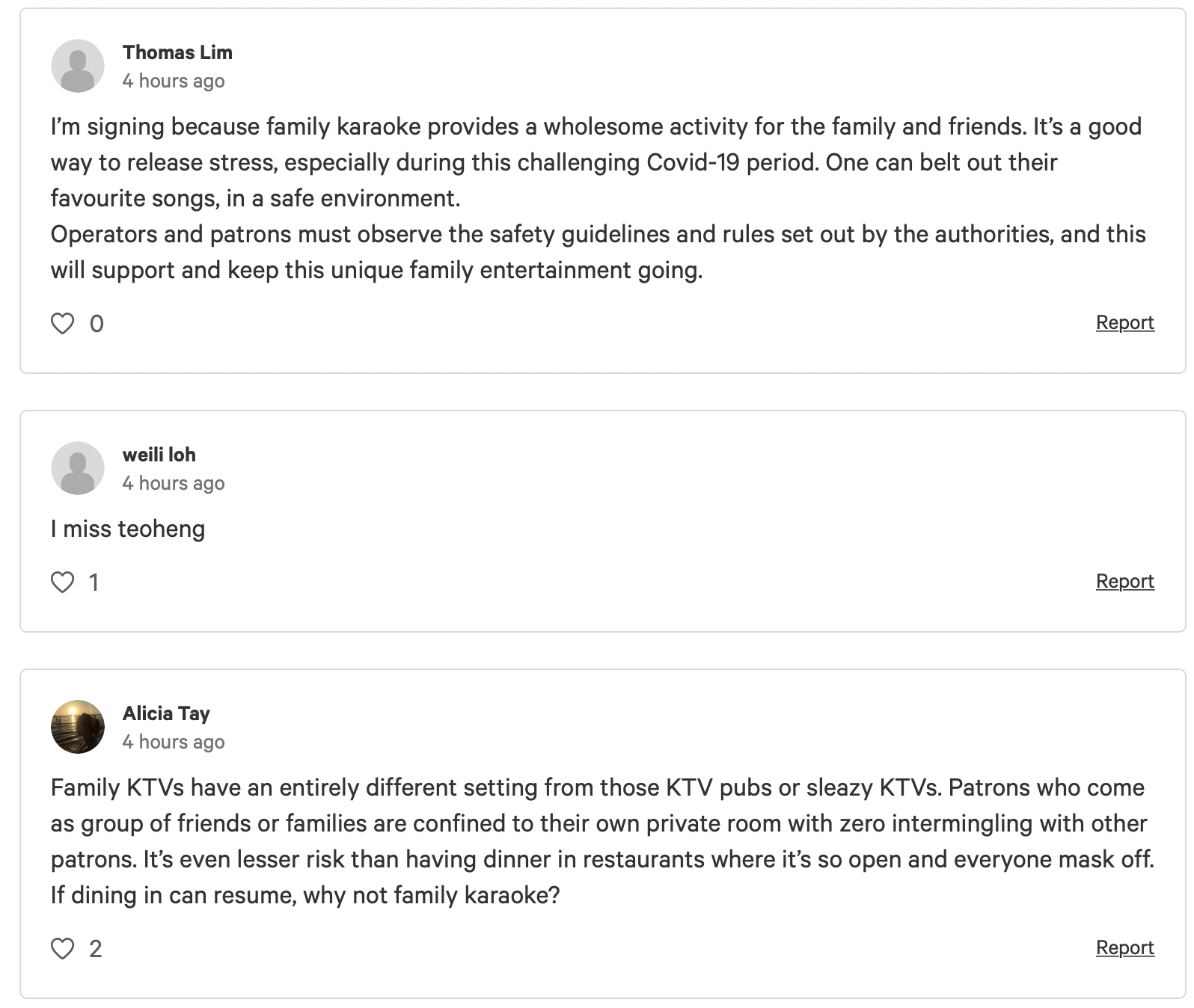