Rio 2016 100m butterfly Olympic champion Joseph Schooling failed to qualify for the semi-finals of his pet event in Tokyo after clocking 53.12 seconds on July 29.

In response, Schooling told CNA after the race that "there's no words to sum it up except 'disappointing'", but he added that "I'm just not going to end it like that".

Besides Schooling, both national swimmer Quah Zheng Wen and paddler Yu Mengyu failed to proceed further in their quest for Olympic medals.

Support athletes regardless they win or lose

On July 29 evening, minister for culture, community and youth (MCCY) Edwin Tong, who is now in Tokyo to support the athletes, penned a message urging Singaporeans to support our athletes during both high and low times.

"We cannot be fairweather about this, enjoying the glory when they do well, but criticising our athletes when they don’t.

Remember how it was on 12 August 2016? How Jo lifted all of us with his phenomenal win? Most of us will remember the day, where exactly we were and what we were doing - so momentous was the occasion, and how proud we were as a nation. If we are to see this again, then we cannot support our athletes only when they do well. We must continue to support and cheer them on, get behind them, not only when they are up, but especially when they are down."

Tong added that both Quah and Schooling had worked hard for the Olympics and he believes they will be able to come back stronger despite the defeats tonight.

Speaker Tan Chuan Jin who is also the President of Singapore National Olympic Council (SNOC) said the disappointment is felt most by athletes themselves.

He added that winning is not the most important part of the Olympic Games.

Emphasising the creed of the games, he said:

Outpouring of support from Singaporeans

With heightened expectations as the defending Olympic champion, Schooling's defeat appeared to have attracted more snide remarks as compared to other athletes.

However, a large number of Singaporeans were rooting for Schooling and continue to stand by him despite the results.

Many also defended Schooling against naysayers and praised his response to the media after the competition. 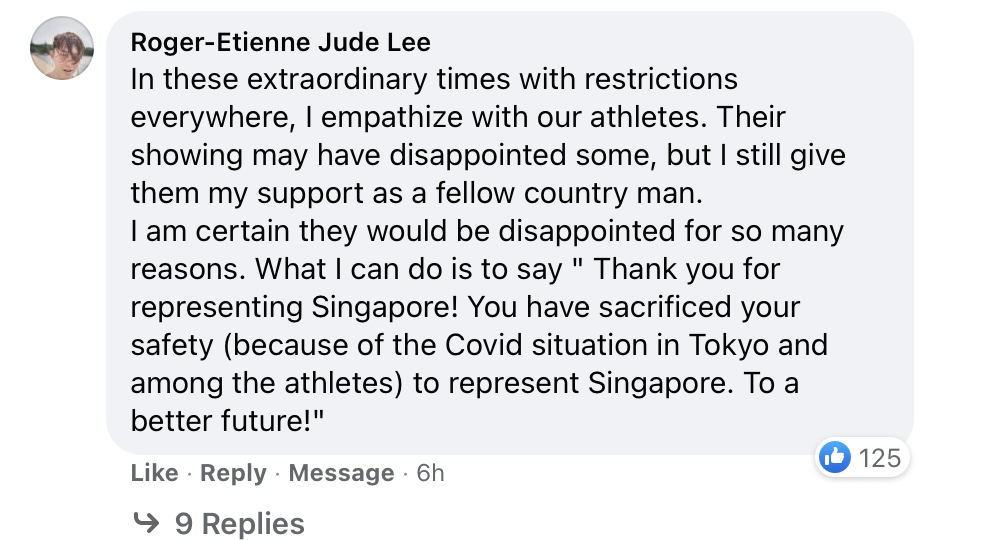