The forested land of 33 hectares used to be occupied by rubber plantations, fruit orchards and kampungs. It was left vacated and abandoned by the 1980s and has been earmarked for residential development since 2003 as the Ulu Pandan estate site.

However, an Environmental Baseline Study (EBS) conducted shows that the forest is now home to about 120 flora species, of which 12.5 per cent are threatened and 27 large trees of significance were identified.

The development plan therefore caused concerns among some residents living near the forest and environmentalists.

The Nature Society Singapore (NSS) also urged a review on the plan and to use the brownfield sites in the vicinity to meet housing needs before resorting to deforesting.

The public consultation on the EBS results was then extended till March 1, 2021, to gather more feedback from the ground.

Previously, the deadline for members of the public to give their feedback was in January 2021.

Western half of Dover forest retained for now

Four months on, the National Parks Board (NParks) and Housing and Development Board (HDB) said that after considering the feedback gathered and the biodiversity in the forest, the western half of Dover forest will be retained at least for the medium term.

The western half of Dover forest is retained because it is comparatively richer in its biodiversity, such as having more large trees of significance and threatened species, HDB said.

The vegetation in the western part is also a lot more diverse as compared to the eastern part which used to be the kampong area.

HDB added that agencies will continue to study and revisit the plans for this site sometime around 2030, taking into consideration of Singapore's lands needs at that time.

In the meanwhile, a "sizeable nature park" will be created in this part of Dover forest and this park will serve as an ecological connector and habitat between Clementi Forest and the Southern Ridges.

It will also connect to the Rail Corridor which is also an ecological corridors used by wild residents in Singapore.

Forest restoration and habitat enhancement works will be carried out to strengthen the area's ecological resilience, HDB said.

The agencies are still studying the optimal size and boundary.

How different is this outcome from what Nature Society Singapore suggested?

What the Nature Society Singapore (NSS) proposed previously was to protect the entire forest from massive clearance.

NSS proposed to keep both western and eastern sides as they both have core areas which endangered birds were spotted using or residing in.

However, part of the forest can be converted to a public park with amenities to serve the recreational needs of Singaporeans, in view of the demand for nature spaces during this period of Covid-19. 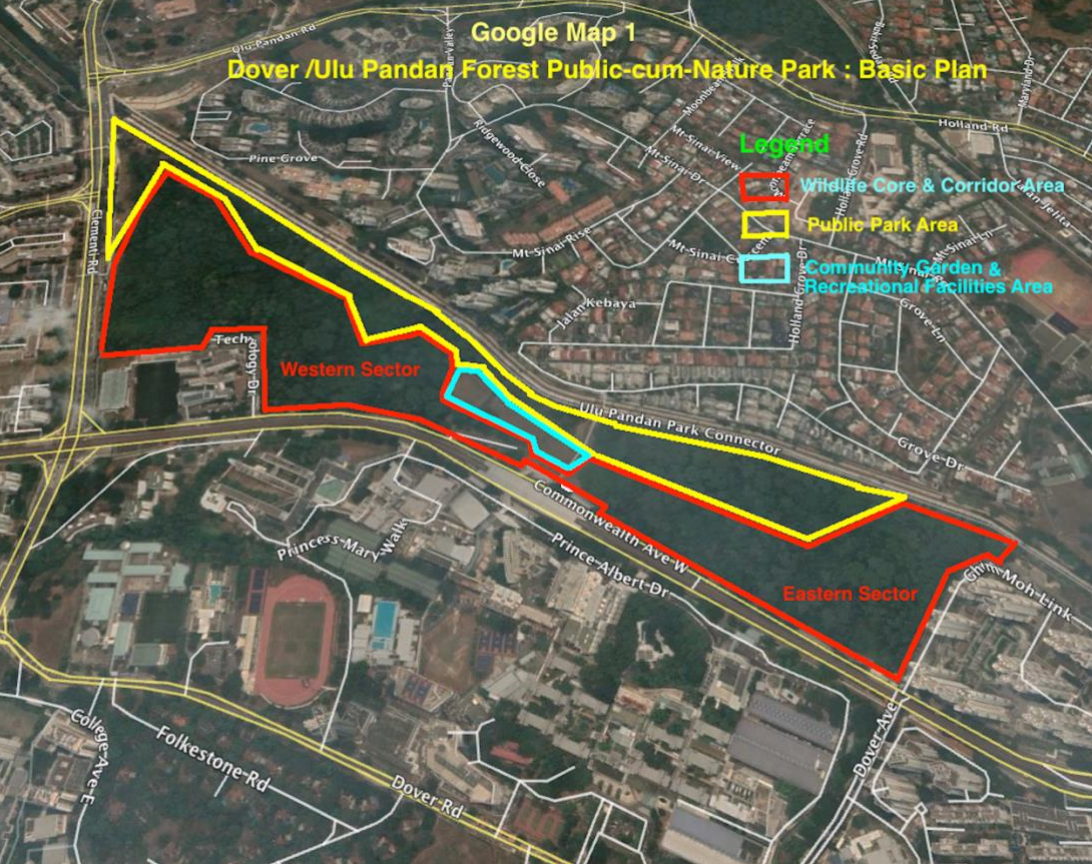 This is the conceptual plan HDB has provided for the revised development plan:

It consists of a green corridor, a nature park as well as a residential estate with recreational facilities near Ghim Moh area.

The first of these new flats is expected to be launched in the second half of 2022, HDB said.

Part of the residential estate includes a five-hectare linear park along the Ulu Pandan Canal, which is five times the original 0.9 hectares of greenery gazetted in the URA's Master Plan 2019, HDB said.

An existing natural stream with a 20-metre wide riparian buffer on both sides of the stream on the eastern part of the site could be retained as the stream is found to be of valuable bank quality which offers ideal habitat for aquatic life.

The counterproposal from NSS to meet housing demand is to use the brownfield sites available in the vicinity.

Some brownfield sites are intended for housing development in the near future such as the vacated SERS site while others have interim purposes for the next few years.

For example, the brownfield site at former Warren golf course is part of future Dover Knowledge District, an extension of One-North, according to HDB.

The strong demand for housing is not just driven by young families' needs but also the change in social structure and housing preference, HDB added. For example, the proportion of 1-pax household has doubled in the last 20 years.

According to the agency, Ulu Pandan, which is part of Queenstown estate, has not had a BTO launch in the past eight years.

And the demand for housing shows through the public consultation for the EBS findings too.

Not all people in Singapore want to retain Dover forest

A total of 1,800 responses were gathered. 441 provided their addresses, with 43 per cent of contributors residing within 1km of the site, HDB revealed.

The feedback was divided mainly into those who wish to conserve the forest, to develop the land for public housing, or to create recreational facilities.

However, even similar feedback can differ in nuance,.

For example, among those who wish to conserve the forest, some wish to preserve the entire forest while others want to retain heritage trees only.

And this reviewed plan for Dover forest takes into account of the various wants and needs as sampled from the consultation.

“The planned development at Ulu Pandan has been designed and refined over many iterations and after extensive consultation with academics, nature enthusiasts, and other stakeholders. The development sets new standards for the integration of natural habitats and greenery into a housing development – both public and private – in Singapore.”