A Singaporean man who proudly shared a year ago in June 2020 that he graduated from a university in the United Kingdom to become a blue collar prime mover driver in Singapore, has just been charged in court on July 28, 2021 for possessing and transmitting on Telegram obscene materials of women that were possibly leaked and without their consent.

How bananas is this story?

This completely bananas story has been made even more bananas as the accused, Andy Wong Ming Jun, 28, wrote a piece published in Nikkei Asia five days before his court appearance -- of all things -- slamming the Singapore government for its handling of the Covid-19 cluster linked to KTVs. 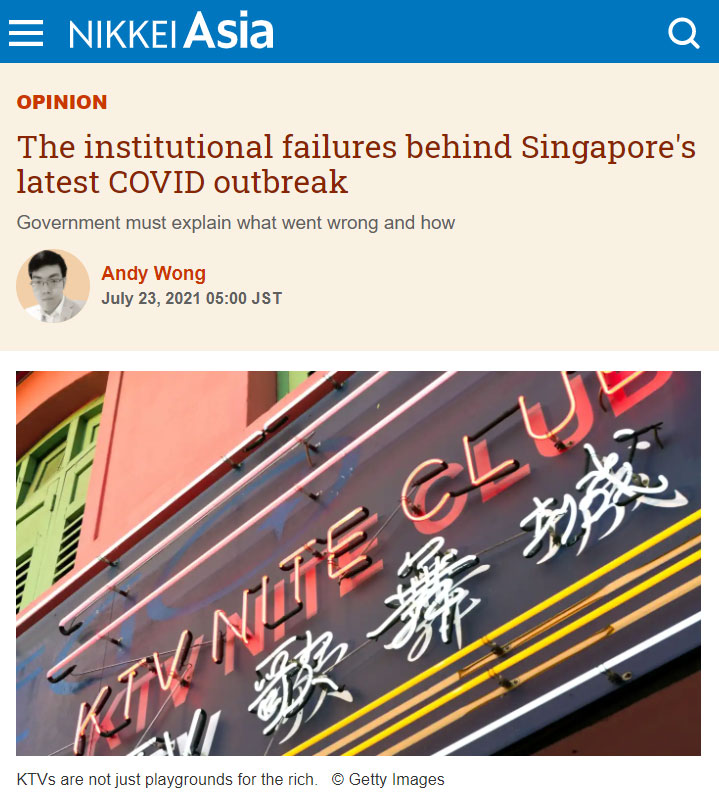 Here is a blow-by-blow account of what went down and how we got here.

The case before the court

Wong currently faces 11 charges in total, which is the highest number of charges out of four men hauled to court on July 28, related to allegedly running an obscene Telegram chat group.

He had in his possession more than 2,300 videos in a Lenovo laptop, two thumb drives, a Sony Xperia XZ2 Compact mobile phone and a Secure Digital memory card.

Wong allegedly advertised the sale of obscene material, while the other three were administrators.

The police said that the Telegram group, "Sam's lots of CB Collection", contained leaked sexual videos and images of women, and these included nude photos, photos of women dressed scantily or in compromising positions, and these were believed to have been circulated on the platform without consent.

When did the police first act on this case?

The police had received a report against the Telegram group on Oct. 24, 2019.

Four men were arrested in November 2019.

When did Wong go public with his prime mover driver stint?

Wong penned an article published on June 14, 2020 about how he became a prime mover driver.

It was well-received at that time as readers found it humbling.

Wong wrote that he graduated from the University of Hull in 2017 with an honours degree in politics and history.

Besides working full-time as a prime mover driver, he advertised himself at that time as a freelance defence and current affairs writer.

This would mean his act of self-promotion was about seven months after he was arrested by the police for his alleged involvement in the obscene Telegram group.

What was one revelation in his piece that is instructive on hindsight?

Wong wrote that he became a prime mover driver after just one interview and worked for a PSA Singapore subcontractor.

He also wrote: "I found the job in April through the government job portal, MyCareersFuture."

This would mean he got the driving job less than half a year after he was arrested by the Singapore police and had a pending case against him.

It appeared he was hired by May 1, 2020 for the prime mover driver job.

It would also mean he was openly profiling himself and his career development after his arrest and with the police still investigating him then.

It could also mean that he failed to land other jobs then not by choice but by circumstance.

Who identified Wong as the same person as the prime mover driver?

Lianhe Wanbao, in its July 28 newspaper report about the obscene Telegram court case, made the link and was the first to identify Wong as the prime mover driver who wrote about his stint.

The Straits Times subsequently identified Wong as the man who penned the Nikkei Asia article.

Did Wong appear in other news?

Wong was featured in The Straits Times in 2016 as a Singaporean who voted for Brexit. 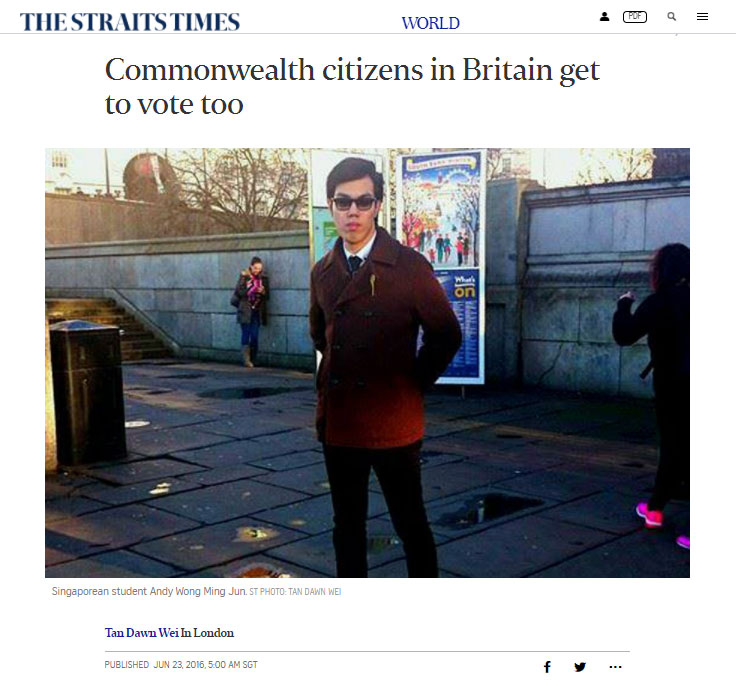 He could do so because he is a Singaporean, and therefore, a Commonwealth citizen, and one who was living in Britain, albeit temporarily.

Wong was at that time a student at the University of Hull when the Brexit referendum was underway.

This set of circumstances granted him the right to vote in a national election under British law.

His vote was for Brexit, because he said he believed he was disadvantaged as a non-EU citizen.

Wong at that time said he wanted to settle down in the UK after his studies, but found it difficult.

"I find it unfair that law-abiding non-EU citizens... have to face a disproportionate number of hoops to jump through in order to seek a future in the UK after graduating from university, while EU citizens get to have a free pass by virtue of the passport they hold," the 23-year-old Wong told ST then.

On hindsight, this logic also appears warped as Brexit was for the nativist elements in Britain to exercise their rights, and by extension, keep foreigners such as Wong out.

How did his latest piece slamming the government for the KTV cluster go?

Sam Tee, a senior director from the Joint Operations Group at MHA, wrote in a rebuttal to the media that it was false for Wong's article to claim that most KTVs in Singapore are fronts for money laundering or illegal brothels run by organised crime cartels.

What did MHA say in its rebuttal to Nikkei Asia?

Tee said it was false that KTVs were allowed to open recently "without explanation", as alleged by Wong.

Wong had also written that the KTV cluster "exposed the pernicious role of organised vice enterprises in Singapore, and the institutional failure of the country's much-vaunted law enforcement to clamp down on them".

In MHA's response, Tee shot back at Nikkei Asia: "Your correspondent's stance appears to be based on a stern disapproval of illegal sexual activity. We commend his high moral expectations. But his comments on public policies need to be based on facts, not imagined realities."

The rebuttal stung as Wong had just been hauled to court.

Tee added: "The cluster was not the reason why the government reimposed stricter safe distancing measures on July 22. A spread into fresh food markets which had the potential for a wider outbreak was the reason."

Where else can Wong's writing be found?

Wong allegedly posts as the user DaybreaksBell93 on the Reddit forum.

In a response to a Redditor who told Wong he should have done more research before he penned his Nikkei Asia piece, DaybreaksBell93 replied:

I did my research. I have my own insider sources. Of course I'm not going to disclose them. But I've known the ups and downs of this whole industry for more than a decade now. Believe what you will, this is the Internet after all.

On LinkedIn, Wong also wrote about his stint as a prime mover driver.

His LinkedIn piece, "Graduate working as a Blue-Collar? Changing Realities in Singapore", appeared more than a month before his essay was published in the mainstream media.

A video from 2015 by Insworld Institute featuring Wong is still online as of July 29: