The Ministry of Health (MOH) has preliminarily confirmed 18 new cases of Covid-19 in Singapore as of 12pm, June 5, of which 13 are locally-transmitted cases.

More significantly, all the community cases announced are linked to previous cases, meaning that this is the first day since May 5 without a single unlinked community case.

There were a number of new restrictions, including limiting social gatherings to a maximum of two people, and disallowing dining in at food and beverage (F&B) venues.

In the MOH press release that announced these new restrictions, MOH emphasised the risk posed by the emergence of local unlinked community cases, and said that it is "worrying" that there may be unknown cases in the community with possible ongoing community transmission.

Surge in community cases during start of Phase 2 (HA)

Mothership.sg has compiled the number of community and unlinked cases announced by MOH since the start of Phase 2 (HA).

Phase 2 (HA) began with a surge in community cases, with a total of 38 locally-transmitted cases on May 16, 17 of which were unlinked. 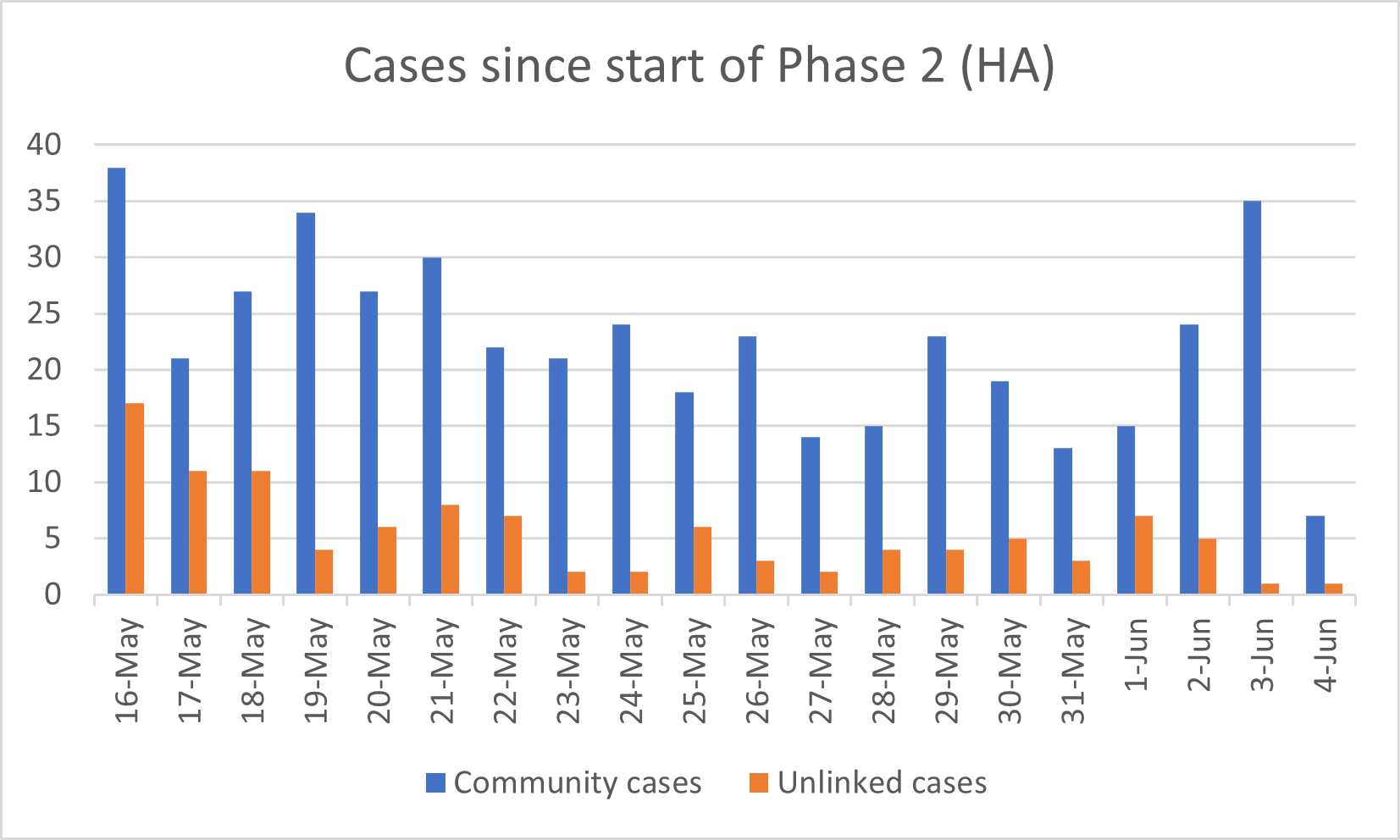 Unlinked cases are down, but community cases still fluctuate

From the data above, it is clear that the number of unlinked cases have been steadily decreasing since the start of Phase 2 (HA).

However, the number of community cases continue to fluctuate.

For example, the number of community cases were decreasing steadily from May 29 (23 cases) to June 1 (15 cases), before it rebound to 24 cases on June 2.

The situation worsened on June 3, when a total of 35 community cases were reported: the highest since the start of Phase 2 (HA).

22 of these cases were linked to the [email protected] cluster.

According to Prime Minister Lee Hsien Loong, who addressed the nation on May 31, the current heightened restrictions should relax after June 13, if case numbers continue to fall.

"Because of your support, the number of daily cases has come down. Barring another super-spreader or big cluster, we should be on track to bring this outbreak under control. We will know for sure in another week or so."

However, on the same day, co-chair of the Multi-Ministry Taskforce Lawrence Wong warned Singaporeans that further restrictions could yet be implemented after Phase 2 (HA) ends,

He said that while measures are working and "bearing fruit", Singapore isn't out of the woods yet, emphasising that the situation is highly fluid.

"We must also be mentally prepared that we cannot rule out the probability of further restrictions down the road if they become necessary," said Wong.