The appearance of a majestic Mandarin duck at an Hougang canal has captured the hearts of numerous people, with photographers flocking to capture its ornate beauty.

Katherine Lu was one of these photographers. Having seen numerous images of the shiny bird on social media, she initially hesitated about going down as she believed it to likely be an escaped or released pet, she told Mothership.

However, curiosity overcame her and on June 13, she travelled down to have a look.

When she showed up at the location at around 9:30am, there were already about 15 photographers lined up with large cameras.

Lu added that everyone was wearing a mask and maintained a safe distance away from each other.

Lu observed that a large bag of rice had been dumped into the canal, possibly to feed the duck.

While Lu was there, the duck ate a bit of rice, waddled around in the water looking stately, preened its feathers, then took a nap.

An hour later, the photographers got some action when a mynah flew down into the canal. The duck then chased off the "intruder".

Another intruder appeared some time later in the form of a pigeon. Lu joked that the duck "waddled over to the pigeon to have a word with it."

It was in the split second when the duck and pigeon turned to look at each other that Lu snapped the shot of their "confrontation", making for a rather hilarious photo of two highly contrasting individuals.

"I took many beauty photos of the bird but this was the funniest. It looked like a confrontation. The duck wanted to protect its territory and its source of food (bag of rice) so I wrote the caption relating to its lunch, 'Don’t you even think about stealing my rice bowl.' It was a literal reference."

The Mandarin duck, with its colourful, glossy plumage, posing next to the drab, ruffled pigeon draws up some rather humorous comparisons.

Facebook users did not hesitate to share their own interpretations of the encounter in the comments section. 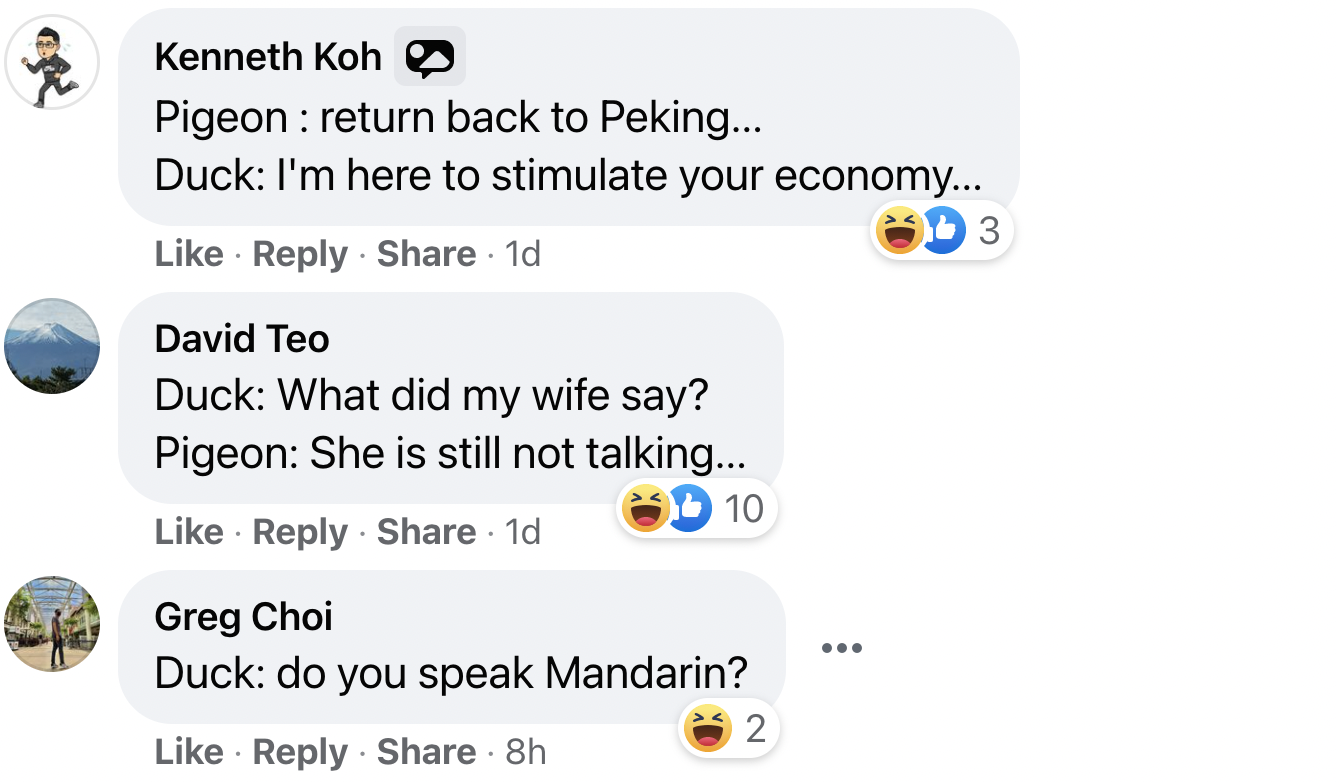 Lu said that she was surprised by the many different ways commenters interpreted the photo from both the duck and pigeon's perspectives.

"Well that’s what photography is all about, a great image should tell a story. What story you want it to tell is up to your interpretation."

Mandarin ducks are sexually dimorphic, which means that males and females look vastly different from each other.

A male mandarin duck has a red beak, and a large white crescent above the eye. Its breast is purple and there are two orange large feathers sticking up near its back.

The female mandarin duck, on the other hand, has a white eye-ring and stripe running from the back of its eye, and has much paler plumage compared to its male counterpart.

The mandarin duck is not native to Singapore.

In August 2008, a female mandarin duck was spotted near Botanic Gardens, as reported by a bird ecology study group.

The study group cited bird specialist R Subaraj, who said that at least two pairs of mandarin ducks were released into Botanic Gardens a few years before.