A tenant in Singapore thought he was getting a good deal after he successfully signed up for a place in Jurong West at S$400 monthly rental.

However, after paying a deposit and a month's rent in advance, the tenant was served with a handwritten contract stipulating the conditions for the S$400 monthly rental.

It turns out, the tenant was only allowed to remain in the rented premises for slightly more than 12 hours a day, and if he had to remain indoors any longer, he would have to pay extra on a day-to-day basis.

The utterly bizarre and unreasonable tenancy agreement was subsequently put up on Facebook in full on June 5, 2021. 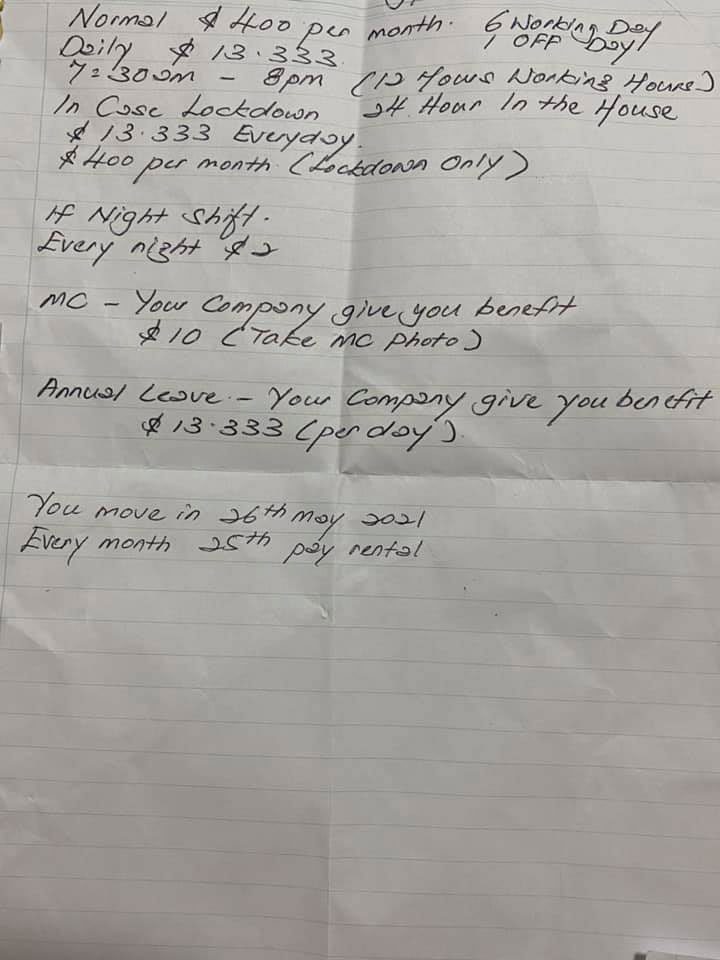 This was after the tenant said he was left with no choice but to expose the contract he was asked to adhere to, as he had been threatened by the landlord for breaking the agreement.

The tenant put up the contract in the iLiveSG.com Room For Rent Singapore SG Facebook group, where he sought the advice of other tenants and asked if it is even normal or legal for landlords in Singapore to include random terms and conditions in a handwritten rental contract.

According to Shin Min Daily News, the tenant, known as Pi Hai, is a 21-year-old Malaysian man who moved to Singapore to work.

Since Pi was stuck in Singapore, with little opportunities to stay over at other people's place due to Covid-19 restrictions on mingling with other others not from the same household, he decided to look online for a room to rent and stumbled upon this Jurong West listing.

Worried that he would be living in Singapore illegally without a residential address, Pi promptly signed a six-month contract.

The tenant's agreed upon rental was S$400 a month, which was a steal given that room rentals, even in less popular locations, can be S$600 or more monthly.

However, the additional charges the tenant would have to pay could easily cause the monthly rental to balloon to twice the amount.

The handwritten note by the landlord said the tenant will have to pay S$400 extra a month if Singapore goes into a lockdown, which forces the tenant to stay indoors.

Paying an extra S$400 per month effectively doubles the cost of the rental.

Another clause in the handwritten note stated that if the tenant works a night shift, he would also need to fork out an extra S$2.

And if the tenant is on medical leave, he would need to pay S$10 per day extra and provide proof of his medical certificate by sending a picture of it to the landlord.

And if the tenant is on annual leave and chooses to stay home, he would have to pay S$13.333 for the extra time spent indoors each day, when he is not out of the house to work.

Cannot eat or cook in the flat

Shin Min revealed that the tenant's cousin had helped to inspect the apartment and even met the landlord.

The landlord said the tenant was not allowed to cook or eat within the flat, and could only wash his clothes once a week, according to Shin Min.

But this did not set off alarm bells at that time.

At that time, all these restrictions appeared acceptable, so the tenant agreed to the terms.

In a screenshot of a conversation between the landlord and tenant, the landlord stipulated the hours that the tenant should not be home, stating that he had to leave home before 8am and can only come back after 6pm.

The tenant was later informed that he would have to pay additional charges if he returned home during this timing.

Pi's father was told that "the laws in Singapore are like this", after questioning the terms of his contract, according to Shin Min.

Moved out after 5 days

After five days, Pi decided to move out.

The landlord then demanded that Pi pay the remaining five months of rental, and even threatened to report him to the police.

Pi stood firm and rebutted that he should be the one lodging a report.

The police has since confirmed that a report has been lodged.

This demand also prompted Pi to share the note with the public.

In her defence, Shin Min spoke to the home owner who said she came up with these additional rules as she has had bad experiences with tenants before.

In addition, she had made the rules for tenants to only stay out of the house at stipulated timings because she felt uncomfortable being the only woman alone in the premises.

According to Singapore Legal Advice, a tenancy agreement should contain payment of rental and utilities, which includes any charges, subscriptions or license fees.

Tenancy agreements should contain terms that give the tenant quiet enjoyment and exclusive possession.

At its most basic form, the landlord must allow the tenant to occupy the rented premises exclusively, without any intrusions and disturbances from outsiders.