Screenshots of what appears to be a WhatsApp text conversation between an Institute of Technical Education (ITE) student and her former tutor are circulating online.

The screenshots have attracted a vigorous response from Singaporeans, with many calling out the sentiments expressed by the tutor as being patently unacceptable in Singapore in 2021.

However, some felt that the conversation may have been staged.

According to the screenshots, the tutor inquired of her ex-student's well being, and asked which JC (or, Junior College) she was in.

The student, named Zoe, responded to "Mrs Teo" by saying that she was doing fine, and currently studying in ITE.

This was apparently enough to trigger an educationally-chauvinist denunciation of Zoe's choice of institution, with "Mrs Teo" calling Zoe a "disgrace" who was "wasting her parents' money and effort".

"Are you oblivious to the fact that ITE has no standing in society?" read a later message. 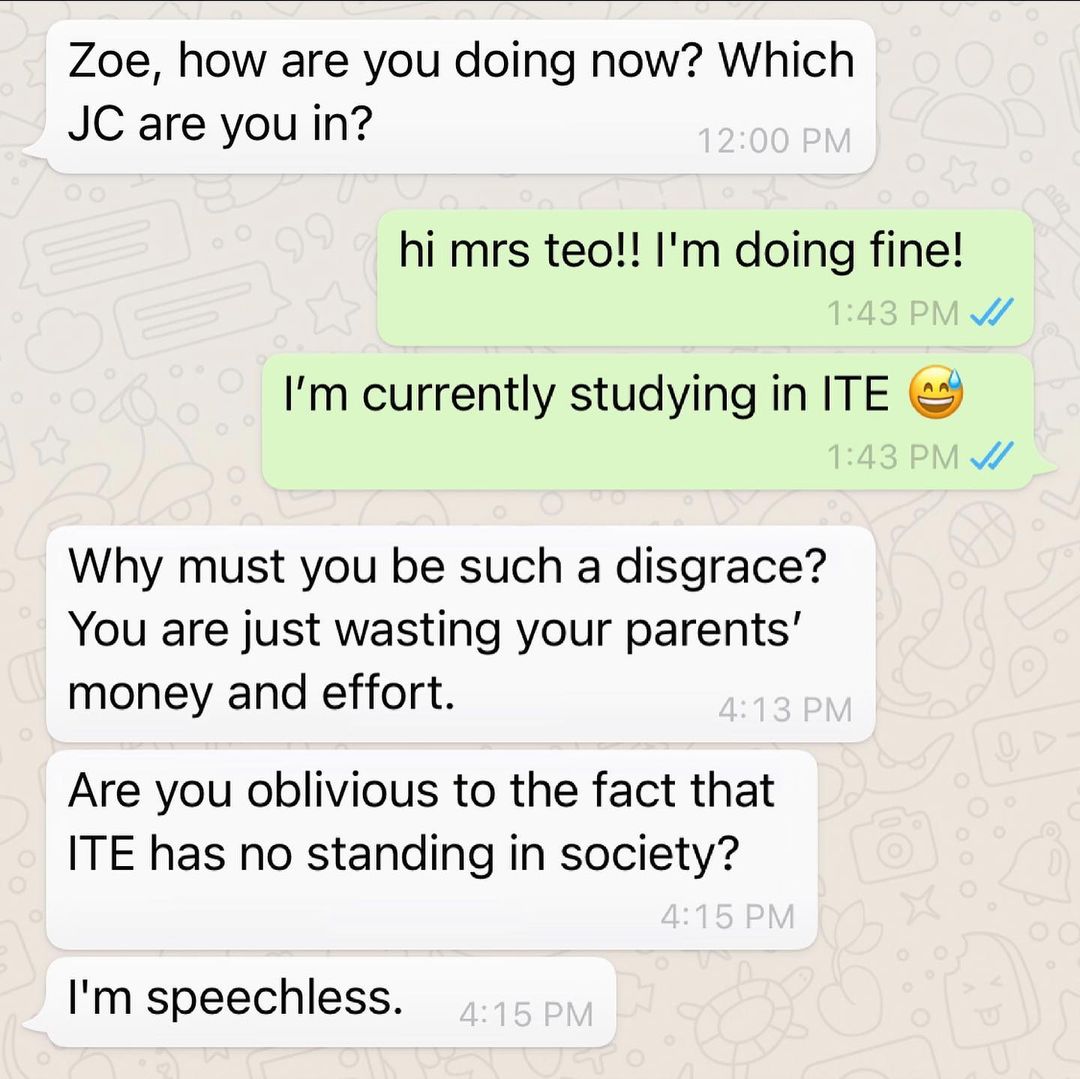 The student then defended her tertiary education decision, saying that "ITE has improved a lot" and how there has been "a lot of news"  reporting that it is "not a bad path".

""You won't even be able to secure a job interview," she wrote acerbically. "Please don't go around telling people that I taught you"

Zoe responded by apologising courteously and saying that "this is getting out of hand", in an apparent attempt to try and bring the conversation to a close.

But "Mrs Teo" wasn't done, and offered an explanation of why she initiated the conversation in the first place, just in case anyone was wondering.

She said that she had initially thought of asking Zoe for a testimonial.

However, with the new information that Zoe was attending ITE, the tutor apparently decided that it would be safer to instead ask Zoe to refrain from telling others that she was a former student of Teo's.

"Mrs Teo" apparently taught Zoe when she was in Secondary 3. 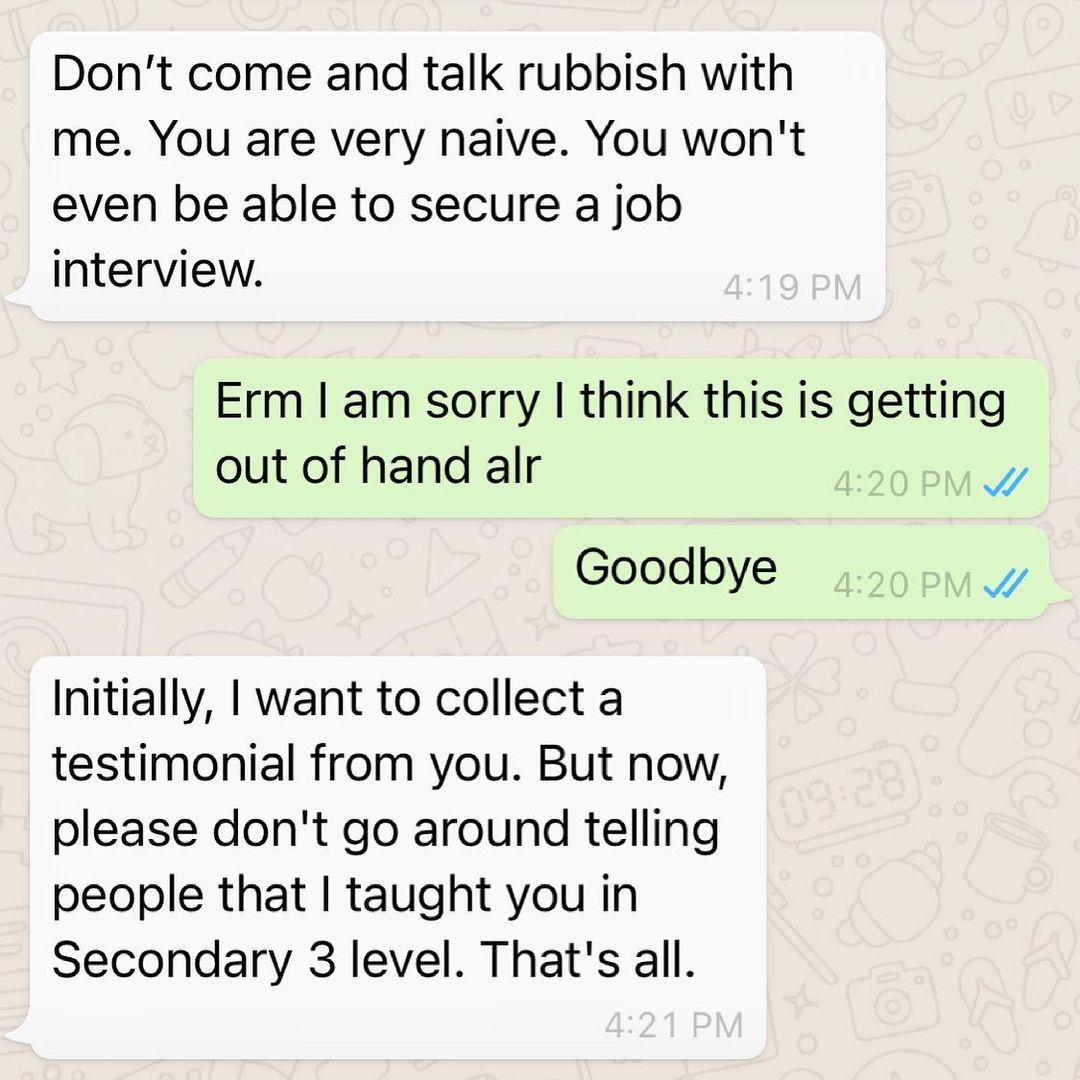 It's not known how Zoe responded to Mrs Teo, if at all.

The screenshots of the conversation were first uploaded on Instagram on Jun. 25 by Blackbelt Clan, which is an education company that seeks to challenge the education system in Singapore, according to its Instagram profile.

Blackbelt Clan said in its post caption that the screenshots were "sent by a friend of our team".

They have since been re-shared by others on platforms such as Facebook.

Some sceptical of conversation's authenticity

The post attracted its fair share of skeptics, who called attention to the over-the-top comments from "Mrs Teo". 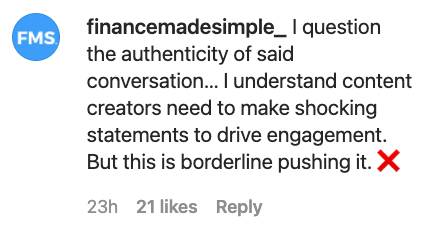 Blackbelt Clan appeared to stand by the authenticity of the screenshots, however, responding to a comment saying that "we wish" it was staged. Some skeptics, however, took the view shared by one commenter, who said that whether the conversation was staged or not, it is still common for ITE students to face discrimination. 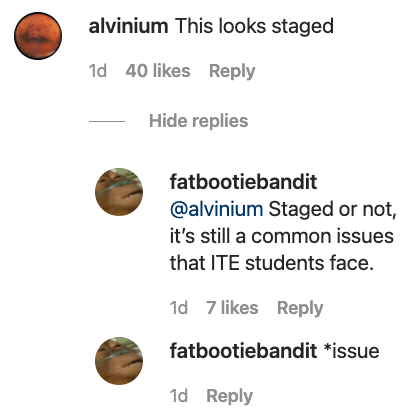 The attracted a flurry of responses defending ITE and its graduates, with many offering their own success stories after identifying themselves as ITE graduates. 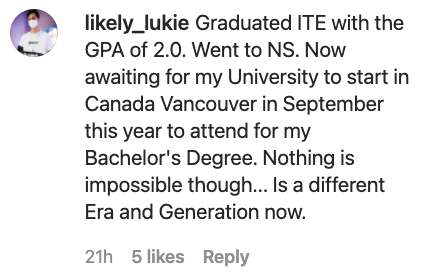 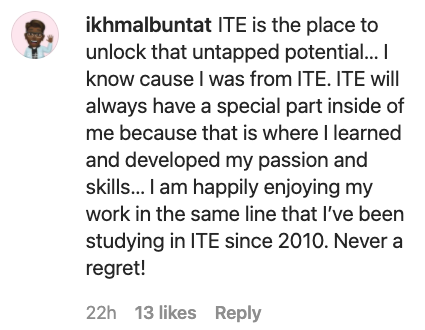 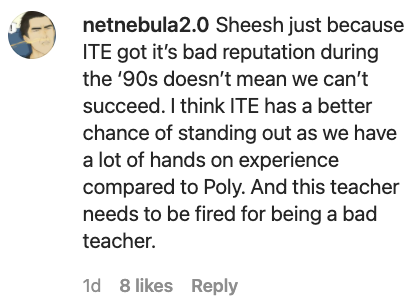 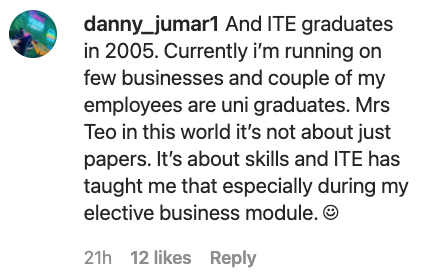 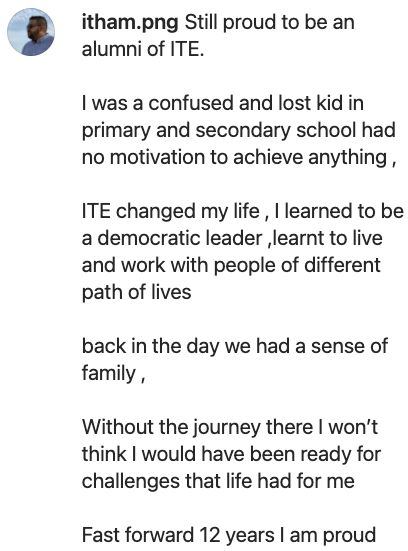 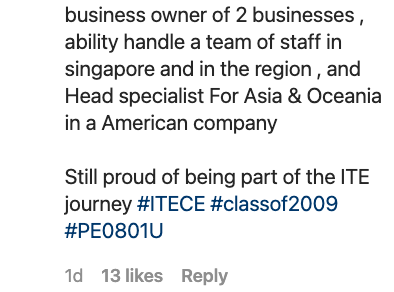 Many also shared their own positive experiences interacting with ITE students: 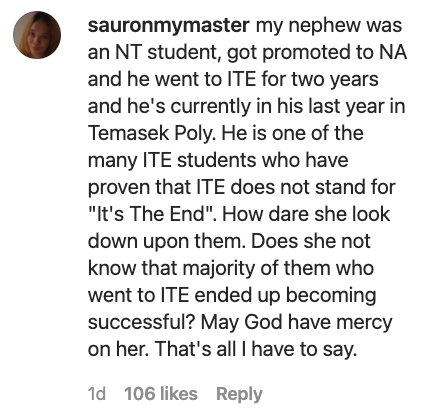 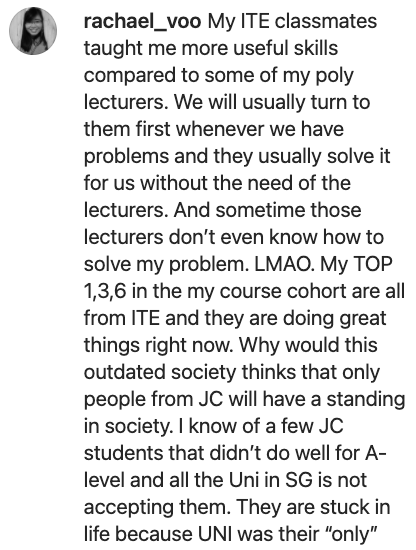 A previous post on Jun. 15 by Blackbelt Clan also addressed the stigma attached to studying in ITE, highlighting that it was not uncommon for people to use the "threat" of going to ITE as a way to motivate students.

The post also attracted responses defending ITE and its students.