A resident in Singapore has taken to Facebook to complain about the items she bought online being delivered right to her doorstep -- and preventing her from opening the gate.

The delivery personnel had apparently left the woman's RedMart purchases stacked right outside the door. The items delivered consisted of four cartons of bottled water and several bags.

But the bulky items presented a challenge.

Each carton box contained 12 Evian bottles of water that are 1.5 litres each.

The total weight per carton is approximately 19.5kg -- assuming the items inside were bottled water as stated on the packaging. 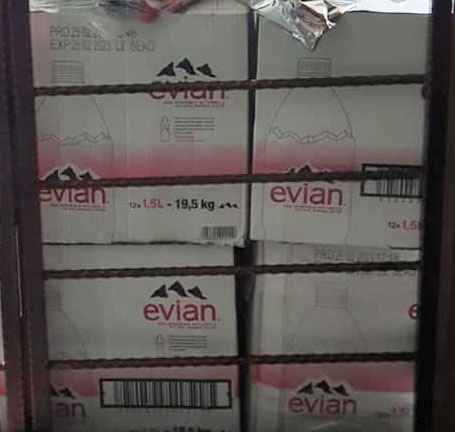 And there were at least four Evian carton boxes in total -- weighing approximately 80kg -- seen in the photos.

Another photo put up online showed the gate slightly ajar eventually, as the woman managed to push it open with the boxes shifted from their original position. The post was met with a lot of readers commiserating with the recipient.

The practice of leaving delivered items right at the gate is apparently common.

One reason could be because the delivery personnel is tasked with taking photos of the recipient's door and unit number, together with the goods, as proof of delivery.

The delivery personnel could also have been cautious in placing the items in front of the gate, which might be monitored by the household's CCTV camera, in the event there is a dispute or theft.

The items are also not placed to either side of the household's door, in case it is mistaken by a neighbour to be their property.

However, the bulky weighted items placed in front of the door could pose a fire hazard and deprive the residents of an unblocked escape route.

It could also be a major inconvenience for ambulant recipients.

At least one comment mentioned that making deliveries of bottled water by the carton are the bane of delivery personnel.

And they might have placed the boxes at the gate as a way of acting out.