And business was very good.

Sold out in 4 hours

The Muslim-owned business officially opened at 11am, but there was already a short queue that had formed before that.

This was despite the dine-in option being unavailable during this Phase 3 (Heightened Alert) period, as it will only be allowed from June 21 onwards.

Just after 12pm, a line formed and extended beyond the confines of the coffee shop.

The waiting time to place an order and collect the food had increased to 90 minutes.

By 3pm the food was sold out, according to a Facebook post put up by Botak Jones.

Pre-orders the way to go

Pre-orders made up the bulk of the stall's orders on the first day.

These advanced orders poured in since the night before the start of business.

Self-pick-up of orders during non-peak hours is recommended.

No dinner served until June 18

The current opening hours will also be limited owing to the great demand.

Botak Jones said in the post that it will not be opening in the evenings for now so that they "can prep for tomorrow's lunch", while the first dinner service will only start from Friday, June 18.

One die-hard Botak Jones fan, who wrote on Facebook about his experience queuing up, was unfazed when told about the wait of one-and-a-hours for the food. 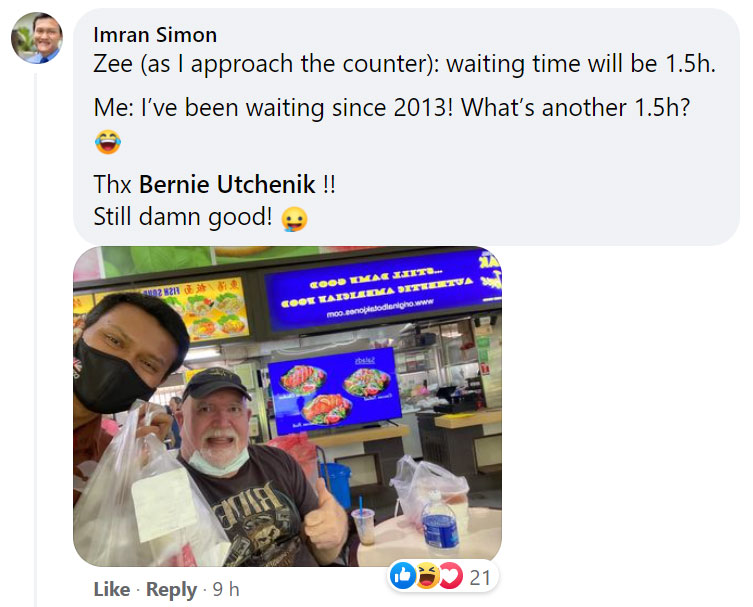 Bernard Utchenik, 69, founder of Botak Jones, made yet another foray into the cutthroat F&B world with this latest venture, The Original Botak Jones.

The western food eatery is making a comeback this pandemic.

He opened his first Botak Jones stall in Tuas in 2003.

Botak Jones had 13 outlets islandwide at its prime.

Utchenik then decided to sell off his shares in 2013.

Utchenik and his wife, Faudziah Mohd Ali, bought over the Botak Jones Stall along Balestier Road and opened a new restaurant, BJ’s American Diner and Grill.

However, unable to turn profit, they closed their Big Bern's stall in June 2011.

It later also closed down but another outlet opened at Timbre+ in April 2016.

This was followed by the opening of an additional outlet at Gluttons Bay in 2020.

But these two outlets at Timbre+ and Gluttons Bay closed down in April and May 2021 due to the pandemic, which brought about financial difficulties.