A yellow Lamborghini Gallardo car in Singapore has attracted some attention, and not just because it is a flashy convertible that costs more than the average five-room flat.

Instead, what drew eyeballs and turned heads was the fact that a bicycle with only one wheel had been mounted on the front of the car.

A photo of the unique configuration was shared by one Xiao Bawang, and has attracted over 600 shares since being re-shared on at least two Facebook pages on Jun. 13.

The unusual sight resulted in some confusion as to what was going on in the picture. 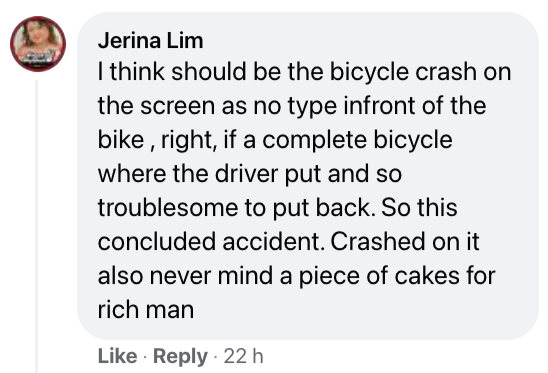 Closer observation, however, would have revealed that the bicycle had not in fact crashed through the windscreen.

The bicycle appears to have been mounted to the car with the help of suction cups attached to the car's bonnet and windscreen.

It has apparently also been spotted on the roads in Singapore:

As some commenters pointed out, the suction cups were likely a commercially-available product created for this purpose.

One example is this US$299 (S$397) product by Florida-based company SeaSucker.

Front windscreen mounting does not appear to be one of the recommended usage options of the SeaSucker product, however.

A number of commenters pointed out the obvious impact of mounting the bicycle on the front windscreen, namely, reduced visibility for the driver.

Driver apparently out of options

The unconventional placement of the bicycle mount was apparently necessary due to the fact that the Lamborghini had a convertible roof with a fabric covering, and would not have worked well with suction cups.

Attaching a rear rack to the trunk of the car was apparently also out of the question, as the car was fitted with a spoiler.

Other commenters suggested that the driver could have hired a transport service for the bicycle, though it is possible that the owner did not want to entrust the bicycle to a service provider whose terms and conditions likely have limitations on their liability in the event of damage.

The bicycle, a mountain bike bearing the logo of U.S. company Pivot Cycles, is likely to have cost a four-figure sum.

Some commenters pointed out that the owner could easily have managed the expense of a second car more suited for transporting bicycles, though others felt that it was a matter that could be left up to the driver.

Another commenter had an alternative explanation for the choice of bicycle transport though.

Roof racks for bicycles and other cargo are legal, according to the Land Transport Authority (LTA)'s website, OneMotoring.

Drivers wishing to install roof racks on their vehicles do not need prior approval from LTA.

However, cargo should be securely fastened, and should not protrude beyond the sides of the vehicle, among other conditions.

Meanwhile, the Road Traffic (Motor Vehicles, Construction and Use) Rules state that "glass and any transparent material fitted to a motor vehicle shall be maintained in such condition that it does not obscure the vision of the driver while the vehicle is being driven on a road."

It is unclear how this would apply to the windscreen-mounted bicycle.

Top image by Xiao Bawang via Roads.sg on Facebook