One woman in Singapore took to social media to share a case of harassment her mother allegedly experienced while walking outdoors.

Parveen Kaur outlined the details of what happened in her Instagram stories.

Kick to the chest

Her mother, Singaporean private tutor Hindocha Nita Vishnubhai, was brisk walking along Chua Chu Kang Drive on the morning of May 7 when she was stopped by a man.

At the time, the 55-year-old had her mask lowered to her chin.

She told The Straits Times that the man, who was accompanied by a woman, shouted at her from behind to pull her mask up. Nita explained that she was exercising, and had clearly worked up a sweat from her walk.

The man then allegedly started verbally abusing her and even used a racial slur towards Nita.

Nita told ST that she was "absolutely shocked" and did not like confrontation, so she simply told the man "God bless you" and tried to walk away.

The man then ran towards her and kicked her in the chest, causing Nita to fall to the ground.

Photos Parveen shared showed Nita with abrasions on her arms and hands. 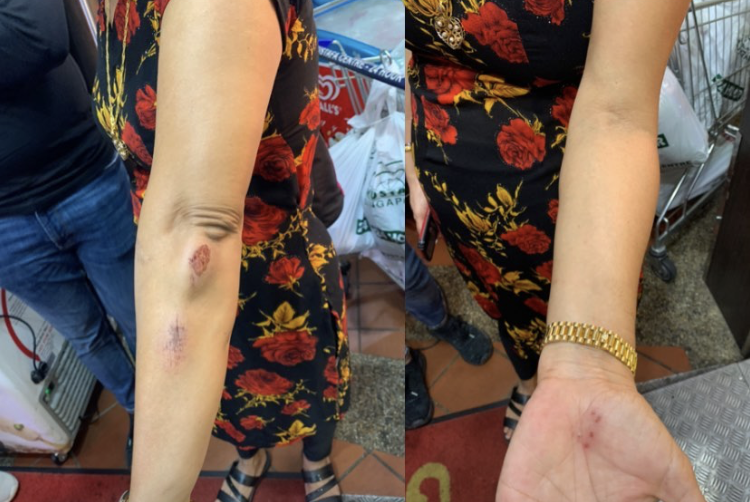 ST reported that the woman did not intervene during the attack, and the pair ran away after the incident.

Luckily, a bystander at a nearby bus stop saw what happened and rushed to help Nita.

Mask not needed while brisk walking

Parveen said that following the incident, her mother was left in tears, and turned up to work later bleeding and shaken.

She added that Nita is now "afraid of taking a walk in her own country".

According to the Covid-19 measures by Sports Singapore, brisk walking is one of the activities where one is not required to don a mask.

Other forms of strenuous exercise where a mask is not required include running, cycling, jogging and walking on hilly terrain.

In response to Mothership's queries, the police confirmed that a report has been lodged, and that investigations are ongoing.

ST reported that the man is being investigated for voluntarily causing hurt and harassment.