Social media marketing page SMRT Feedback by The Vigilanteh has publicly apologised for a Facebook post it put up on Friday, May 21, 2021.

But a screen shot of it showed that the post posited hypothetical scenarios that involved Singaporean Muslims having to pick sides, and questioned the loyalties of these individuals in times of conflict.

The post ultimately suggested that the best option was to not let Singaporean Muslims have a stake in choosing what to do.

The post, which was written in an irreverent style, also made a reference to "bin laden", which was construed by the complainant as an overt attempt to link Muslims to Al Qaeda terrorist leader, Osama bin Laden.

At last count, the SMRT Feedback post that stirred debate and rebuttals had more than 3,000 reactions and counting before its deletion, with multiple commenters expressing their disapproval and disagreement with the premise of the statements.

What complainant took issue with

It appeared that out of all those who complained about the post's content, one person, Syazana, did eventually go to the police.

One of the complainant's main gripes was that the post will cause a non-Muslim, who does not understand Islam, to question a Singaporean Muslim’s loyalty during war time, and assume that Singaporean Muslims "are predisposed to be traitors".

"It is irrelevant that the attacker comes from a Muslim country or where our weapons come from."

She added: "This is a blatant attempt to promote feelings of enmity, hatred or ill-will by non-Muslims against Muslims. It is surely an offence under s 298A, Penal Code."

She also reasoned that such a post does not do Singaporean Muslims a favour.

She added that Singaporean Muslims already have their "loyalty questioned many times", and "we have had to fight hard to dispel the unfair assumptions that underlie these questions".

In response to the critical post and the backlash online, SMRT Feedback's apology was put up on Facebook on Saturday, May 22,

However, the apology stopped short of having an identifiable individual who owns the Facebook page sign off on the capitulation.

The post apologised for "any offence caused to the Muslim community".

The page also tried to justify the purpose of its deleted post.

SMRT Feedback wrote: "Let me put it out here that the previous post was not in anyway construed to question the loyalty of Muslims in Singapore but to reaffirm a Muslim's commitment to his religion."

However, it is unclear if the police report and this apology are material to the Singapore authorities, or provide any grounds to investigate the owner or owners of the SMRT Feedback page, which began in December 2011 as a spoof page to pretend to deal with commuter complaints in the wake of GE2011 and a day after the first major train disruption in Singapore.

It is also unclear if this current apology will remain online, as the SMRT Feedback page has a history of deleting Facebook posts over time.

One other Facebook user threatened to make police report

SMRT Feedback's rare apology also comes as a surprise as the page had put up a post on May 21, apparently mocking a commenter who wrote about lodging an online police report against the group. 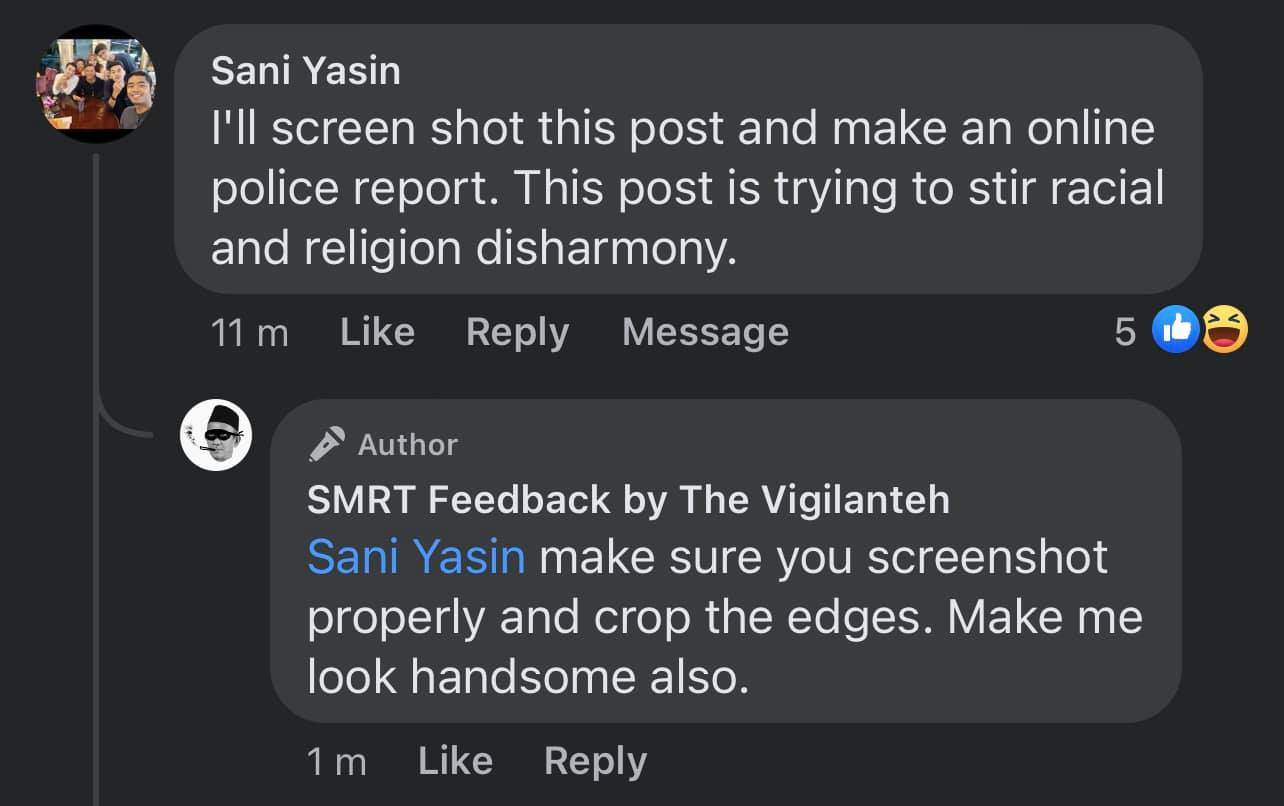 The warning is believed to have been directed at SMRT Feedback after it published the controversial post about Singaporean Muslims.

In response to queries from Mothership.sg, the police said: "The police confirm that a report was lodged and we are looking into the matter."