[UPDATE on May 30 at 4:10pm: This article has been updated with a statement from Esso.]

A man in Singapore took to Facebook to warn others of a faulty petrol pump at the Esso station along Bedok North Road, after petrol overflowed out of his car while he was refuelling.

However, commenters were split regarding the question of who was to blame for the incident.

How did the petrol overflow?

The man, Facebook user Alexander Loh, wrote that he visited the Esso station on May 28, stopping his car at the Pump 8.

Loh recalled starting the petrol pump on his own as he saw the staff are busy attending to other customers.

He set it to "the auto pump function" and went to the other side of the car to wait, explaining that this was because his phone was in his pocket.

He was then alerted to the petrol spilling out of his car by another man who was at an adjacent pump, and quickly stopped the pump. By this point, petrol had spilled out of the fuel tank and onto various parts of the car, forming a puddle on the floor.

Loh observed that more than 50 litres of petrol had been pumped, and said that it was "very strange", as this was an unusually large amount for his car.

Reaction from the staff

In his post, Loh took issue with the reaction from the Esso station's staff, saying that "nobody showed any sense of urgency", and that he was "very disappointed" with the safety protocol, as his experience did not seem to be an isolated incident.

While he was given a discount of S$5 for the spilled petrol, he questioned the staff's assessment of the amount of petrol which had spilled, saying that a pump attendant had assessed the leakage to be about 2.2 litres, just by "using his naked eyes".

After the spillage occurred, a sign was left on the pump indicating that it was faulty.

The majority of commenters on the post were of the view that Loh should have taken greater care to prevent the spillage from happening. 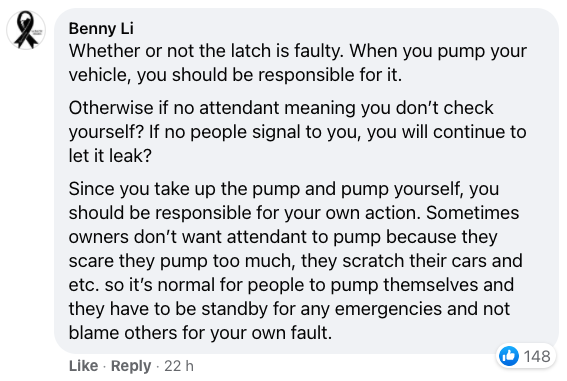 Others, however, recognised that there was an element of risk from the faulty pump mechanism, and called upon Loh to bring the matter to Esso's attention.

Another commenter said that if the staff were aware of the faulty pump mechanism, they should have taken steps to warn users of it.

Loh's post was also well-received by a potential customer of that particular Esso station, who thanked him for the advanced warning.

Another commenter offered some insight on how the petrol pump works, explaining that spillage could potentially be the result of not fully inserting the pump nozzle into the petrol tank.

An Esso spokesperson told Mothership that the pump nozzle was taken off service for checking, after the incident with the customer.

After being inspected by a maintenance service provider, it was "verified to be working normally".

Esso said that the station staff who responded to Loh had followed safety protocols, including using oil absorbent pads from the station's spill kit to soak up the spillage.

It also said that safety protocols "discourage using water to flush, to avoid spreading the spill", and that it had reached out to Loh to explain its process, and to clarify the station staff's response.

"We remain committed to ensuring the safety of our customers and station staff," said Esso.

You can see their statement in full here:

"Following the incident that the customer said he had with one of our pumps at Esso Bedok North, the nozzle was isolated and taken off service for checking. It was inspected by a maintenance service provider and verified to be working normally. Fuel dispensing equipment at Esso stations undergo regular maintenance and checks.

We have clarified that three of our station staff responded to the customer’s request for help, and they followed existing safety protocols, using oil absorbent pads from the spill kit to soak up the spillage. Safety protocols discourage using water to flush, to avoid spreading the spill.

We have reached out to the customer to explain our process for handling spills and to clarify our station staff’s response.

We remain committed to ensuring the safety of our customers and station staff."