This bizarre incident took place at 56 New Upper Changi Road on May 5 at dinner time.

According to CCTV footage put up on Facebook by the stall on May 6, it showed a three-and-a-half-minute back-and-forth between the customer and stallholder.

Although the video had its audio muted, it was clear there was an exchange of words between both parties as they could be seen gesticulating animatedly.

The exchange also attracted at least two other coffee shop patrons who stepped in to defuse the situation.

At one point after the two-and-a-half-minute mark, the customer could be seen holding a tray in his hand, but did not appear to want to confront the stallholder who was cutting up chicken with a chopper in hand.

After the the three-minute mark, the customer could be seen appearing more animated and infuriated, and within the next few seconds, picked up the plate of chicken served to him and hauling its contents and the plate at the stallholder.

The chicken slid off the plate initially onto the serving area, and the customer then flicked the meat toward the stallholder using the plate.

The customer then threw the plate and subsequently walked away, as the stallholder maintained his composure and continued to prepare dishes, even scooping rice from a container.

The stall subsequently uploaded photos in the comments section of the Facebook video of the police report the stallholder made. 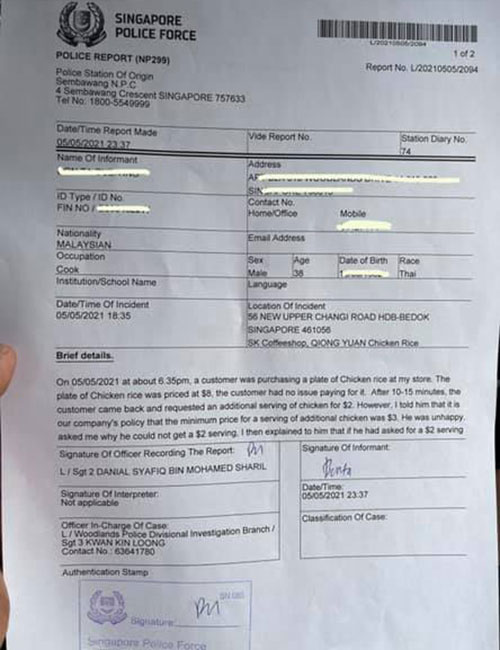 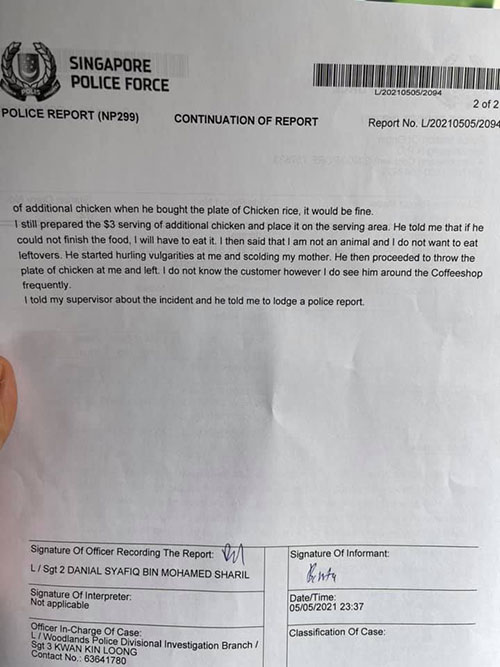 The police report then shed more light on the incident.

According to the police report, the customer had in fact just patronised the stall before the bust-up to buy S$8 worth of chicken rice.

The customer, according to the report, wanted to buy an additional S$2 worth of chicken some 10 to 15 minutes after his first purchase, but was told the minimum order was S$3 instead.

The plate of chicken rice was priced at S$8.

The customer had no issue paying for it.

After 10 to 15 minutes, the customer came back and requested an additional serving of chicken for S$2.

However, I told him that it is our company's policy that the minimum price for a serving of additional chicken was S$3.

He was unhappy and asked me why he could not get a S$2 serving.

I then explained to him that if he had asked for a S$2 serving of additional chicken when he bought the plate of chicken rice, it would be fine.

I still prepared the S$3 serving of additional chicken and placed it on the serving area. He told me that if he could not finish the food, I will have to eat it.

I then said that I am not an animal and I do not want to eat leftovers.

He started hurling vulgarities at me and scolding my mother.

He then proceeded to throw the plate of chicken at me and left.

I do not know the customer, however, I do see him around the coffee shop frequently.

I told my supervisor about the incident and he told me to lodge a police report.

Commenters on the video were mostly against the customer who behaved rashly.

They called out his actions as tantamount to abuse and said the stallholder and stallowner were right in being able to decide on the pricing of their food.

The onus will then be on the customer to decide whether or not to patronise the stall and give it business.

However, a minority of views also pointed out that the stall could have been more flexible in its approach in dealing with such customers.

It could allow the sale of S$2 of chicken as a one-off transaction to appease a difficult customer.