The Ministry of Health (MOH) has confirmed 24 new cases of Covid-19 in Singapore on Friday (Apr. 30).

Amongst the new cases, nine are in the community and out of the nine, eight are linked to previous cases. 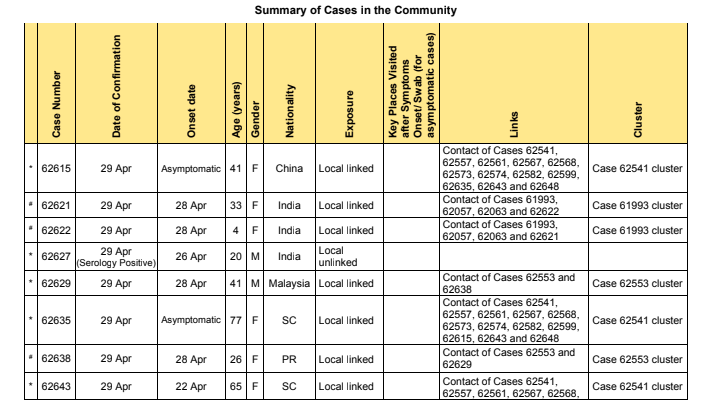 Case 62621 is a 33-year-old female India national who is a Dependant’s Pass holder.

As they had been identified as close contacts of 61993, they were placed on quarantine on April 15.

They were tested for Covid-19 infection during quarantine on April 16, and both their tests were negative.

They developed acute respiratory infection (ARI) symptoms on April 28, and were tested again after reporting their symptoms.

This time, their test results came back positive for Covid-19 infection on April 29 and they were conveyed to KK Women’s and Children’s Hospital.

Case 62629 is a 41-year-old male Malaysia national who works as a sales assistant at New Odense(s) Confectionery & Bakery.

He developed a fever and cough on April 28 and sought medical treatment at a General Practitioner clinic where he was tested for Covid-19.

As he had been identified as a close contact of Case 62553, he was contacted by MOH on April 28 and was placed on quarantine.

He reported his symptom and was conveyed in an ambulance to Khoo Teck Puat Hospital.

His test result came back positive for Covid-19 infection on April 29.

His serology test result is negative.

Case 62638 is a 26-year-old female Singapore Permanent Resident (PR) who works as a cleaner employed by Exceltec Property Management, and deployed at a community care facility at Tuas South.

She developed a cough and sore throat on April 28.

As she had been identified as a close contact of Case 62553, she was contacted by MOH on April 28 and placed on quarantine, and was tested for Covid-19 on the same day.

Her test result came back positive for Covid-19 infection on April 29 and she was conveyed in an ambulance to Alexandra Hospital.

Her serology test result is negative.

Four of the community cases are linked to Case 62541, a 46-year-old female Philippines national who works as a nurse in Tan Tock Seng Hospital (TTSH).

Case 62615 is a 41-year-old female China national who works as a cleaner at ISS Facility Services Pte Ltd, and is deployed to TTSH's Ward 9D.

She is asymptomatic and was detected on April 29 as part of TTSH’s proactive testing of staff in Ward 9D following the confirmation of Case 62541.

Her test came back positive for Covid-19 infection on the same day.

Her serological test result has come back negative.

She tested negative for Covid-19 on April 26 while warded at TTSH.

The next day, she was discharged to United Medicare Centre (Toa Payoh) Nursing Home.

On April 28, as she had been identified as a patient who had stayed in Ward 9D, she was isolated and tested.

Her test came back positive for Covid-19 infection on the same day.

TTSH has stopped all patient transfers to intermediate and long-term care (ILTC) facilities until swabs for patients and staff in lockdown wards are completed and cleared.

MOH has reminded ILTC facilities to be vigilant and closely monitor patients transferred from TTSH from April 18 onwards.

This includes the isolation and/or segregation of these transferred patients from the rest of the residents where possible and close monitoring of their health condition.

In addition, all prevailing precautionary measures, including infection prevention and control measures, adherence to PPE guidelines, split team arrangements for patient facing staff and visitation policies in the respective ILTC facilities will continue.

She was detected as part of TTSH’s proactive testing of patients on April 29, and her result came back positive for Covid-19 infection on the same day.

As a precautionary measure, TTSH locked down Ward 9C and tested all staff and patients who had been in the ward.

All other patients in Ward 9C have tested negative for Covid-19 infection.

Results for the staff are pending.

Case 62648 is a 36-year-old male Singaporean who is a doctor at the National Neuroscience Institute.

He is asymptomatic, and was detected on April 29 as part of TTSH’s proactive testing of staff.

His test result came back positive for Covid-19 infection on the same day.

The TTSH cluster now has 13 cases in total.

MOH announced in a press conference earlier that all public places visited by the cases linked to the TTSH cluster during their likely infectious period will be closed for cleaning for two days.

This is also to facilitate the testing of staff at the affected places, for surveillance against further spread.

TTSH has also started mass screening for all inpatients and staff working in their wards.

There are about 1,100 inpatients and 4,500 staff in the wards, including doctors, nurses, allied health professionals, housekeepers, and other support staff.

Additionally, TTSH staff and patients who were in the TTSH Main Block levels three to 13 from April 18 to 28 are being tested.

Case 62627 is a 20-year-old male India national who is a student at the National University of Singapore (NUS).

He resides on the Yale-NUS College campus, and last attended classes on April 12.

He developed a fever, sore throat and body aches on April 26 and self-isolated in his room.

He was tested for Covid-19 by the NUS University Health Centre on April 28, and his result came back positive on April 29.

His Ct value was very high, which is indicative of a low viral load, and his serology test result has come back positive.

According to MOH, he could be shedding minute fragments of the virus RNA from a past infection which are no longer transmissible and infective to others.

But given that MOH is not able to definitively conclude when he had been infected, MOH will take all the necessary public health actions as a precautionary measure.

They have all been placed on Stay-Home Notice (SHN) upon arrival in Singapore.

Amongst the imported cases: 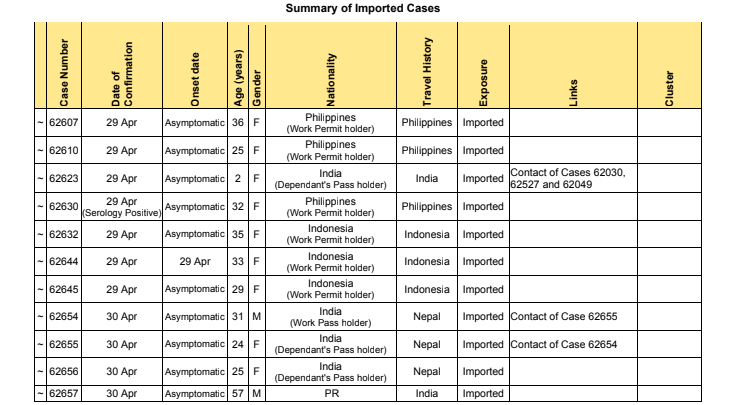 13 more cases of Covid-19 infection have been discharged from hospitals or community isolation facilities.

In all, 60,751 have fully recovered from the infection and have been discharged from hospitals or community care facilities.

There are currently 113 confirmed cases who are still in hospital. Of these, most are stable or improving, and none are in critical condition in the intensive care unit.

251 are isolated and cared for at community facilities. These are those who have mild symptoms, or are clinically well but still test positive for Covid-19.

A total of 30 cases in Singapore have passed away from complications due to Covid-19 infection.

MOH also regularly updates a list of public places visited by confirmed cases for more than 30 minutes during their infectious period.

There are new locations reported today, including the following:

The new locations are highlighted below in the list of locations visited by confirmed cases within the last two weeks here: 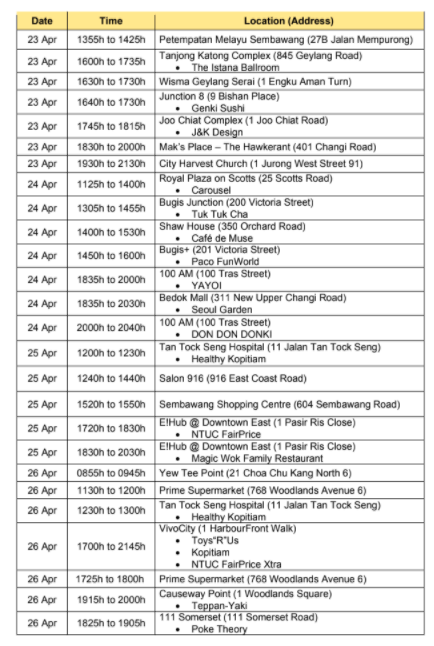 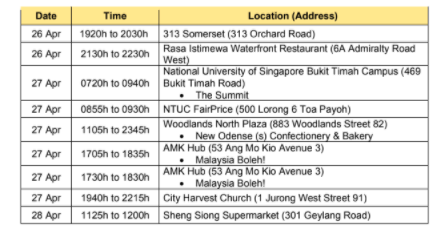