While an image on the left showed China launching its Tianhe core module for its space station, the other showed a makeshift crematorium in India.

The post was accompanied by the caption: "China lighting a fire versus India lighting a fire" and the hashtag that new Covid-19 cases in India had surpassed 400,000 a day.

Several funeral pyres had sprung up in the Indian capital of New Delhi as the city runs out of space to cremate its dead.

India reported on Sunday, May 2, that 3,689 people had died within the past 24 hours -- its highest daily death toll from Covid-19 since the pandemic began.

The post was made a day after Chinese President Xi Jinping told Indian Prime Minister Narendra Modi that he was "very concerned about the recent situation" in India, ABC News reported.

The account previously made a post that juxtaposed the Huoshenshan (which means "mountain of the fire god") Hospital in Wuhan with a makeshift crematorium in India. 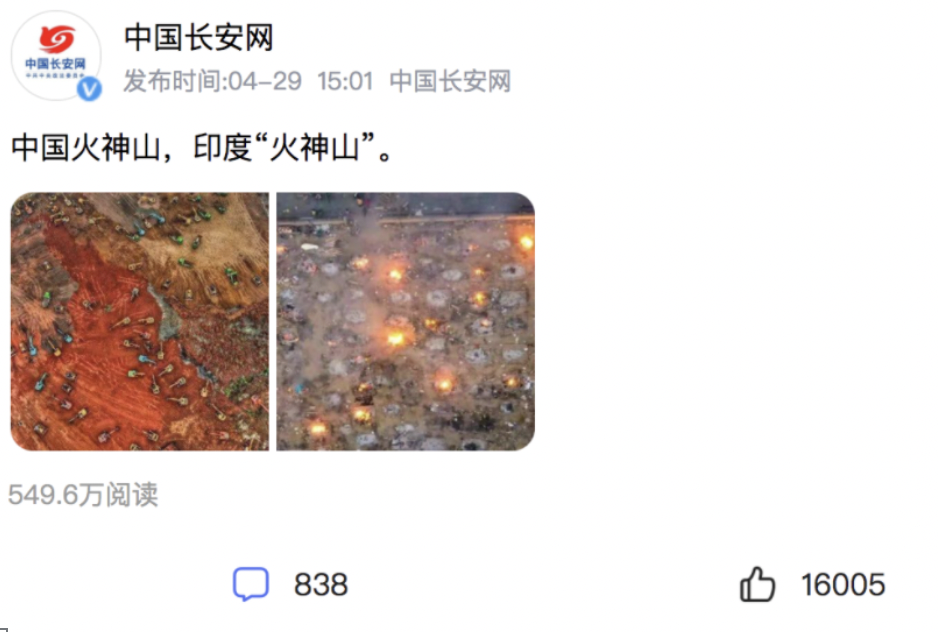 The post was carried by the official Weibo accounts of other authorities too, such as the Chinese Police and the People's Procuratorate of Tianjin.

Both posts sparked considerable backlash among Chinese netizens, who raised concerns over its callousness and lack of sensitivity regarding a serious health crisis that is still ongoing.

While it was later deleted, screenshots of the original post still remain on the microblogging platform Weibo.

Many netizens were shocked that an official government agency could make light of human lives in such a manner, expressing their disapproval on Weibo.

a blogger wrote on WeChat: "I apologize to Indian people on my own behalf. The post by [Central Political and Legal Affairs Commission‘s] Weibo acct doesn't represent me. We live on the same planet... We feel your sufferings." The essay has been deleted. https://t.co/XZJ5P2AB8p

China Digital Times highlighted several comments that both supported and disagreed with the post.

"I had chills after I saw the post. I know some people have a really low bottom line, but I never thought it could be this low, to the extent of openly ridiculing the loss of lives, and to the point of feeling proud despite having lost one's conscience."

Another commenter felt the opposite, saying:

"There's nothing inappropriate about this, I didn't see these people coming out and saying something when India was killing our soldiers."

In general, netizens were divided over the issue, although most felt the posts were offensive and lacked empathy.

"In the face of a man-made disaster, we should maintain deference to life itself!"

"There's no need to make such a glaring comparison and rub salt on their wounds."

"Although it's the truth, an official channel from the authorities should not have mocked others using human lives."

Some non-Chinese social media users had also taken offence at the posts, taking to Twitter to demand an explanation from the Chinese Ambassador to India.

For the fair number of netizens who agreed with the posts and found no fault with them, they also called out the camp that condemned the posts, accusing them of having a "holier-than-thou" attitude.

Reply: "Is it still wrong to describe the truth? Is it the fault of the Chinese government that the virus is now ravaging India?"

"A completely objective description of the situation."

"Do y'all remember how the Indians (a derogatory slang term was used in the original post) mocked the Chinese on Twitter when the outbreak first started? Do y'all also remember how the Indians insulted our army when they faced off against our Tibetan troops? Those people who said this is inappropriate, these fence sitters will say do you bite the dog back if it bites you? No, we don't bite dogs, we simply take a knife and stab them in the heart!"

When asked for comment, the Chinese foreign ministry made no mention of the post, telling Bloomberg: "We hope everyone gives attention to the Chinese government and mainstream public opinion supporting India's fight against the epidemic."

The ministry added that China will continue sending more supples to India to show the country's support for its neighbour through practical action.

Animosity still remains between the two neighbouring countries despite high-level talks that sought to relieve tensions.

A border dispute last year had killed dozens, and seen nationalistic sentiments flare on both sides.