Singapore's typically tame and undiscussed entertainment scene is in the thick of its latest saga.

Since developments have been reported almost every day for the past week, here's a condensed version of what went down (spoiler: Taiwanese star Patrick Lee's reputation).

The whole thing started when Ng went on Guo Liang's talkshow "The Inner Circle" on April 7, 2021.

While in the hot seat, Ng revealed that he was once bullied by an Taiwanese actor on set.

While Ng did not name names, there were enough identifiers in the conversation that all eyes landed on one Patrick Lee, a name most Singaporeans had hitherto not heard of.

Lee is a 41-year-old actor host, model, and actor.

In response to the accusations, Lee's management released the following statement:

"The truth speaks for itself. Staff who were on set can attest to what really happened, and we will not be commenting further on this matter."

Lee's agent also described the Taiwanese actor as "polite and gracious," and added that he does not believe such an incident had occurred between Lee and Ng.

The saga was further fuelled when Lee posted to his socials, sarcastically congratulating Ng for becoming "a little more famous". 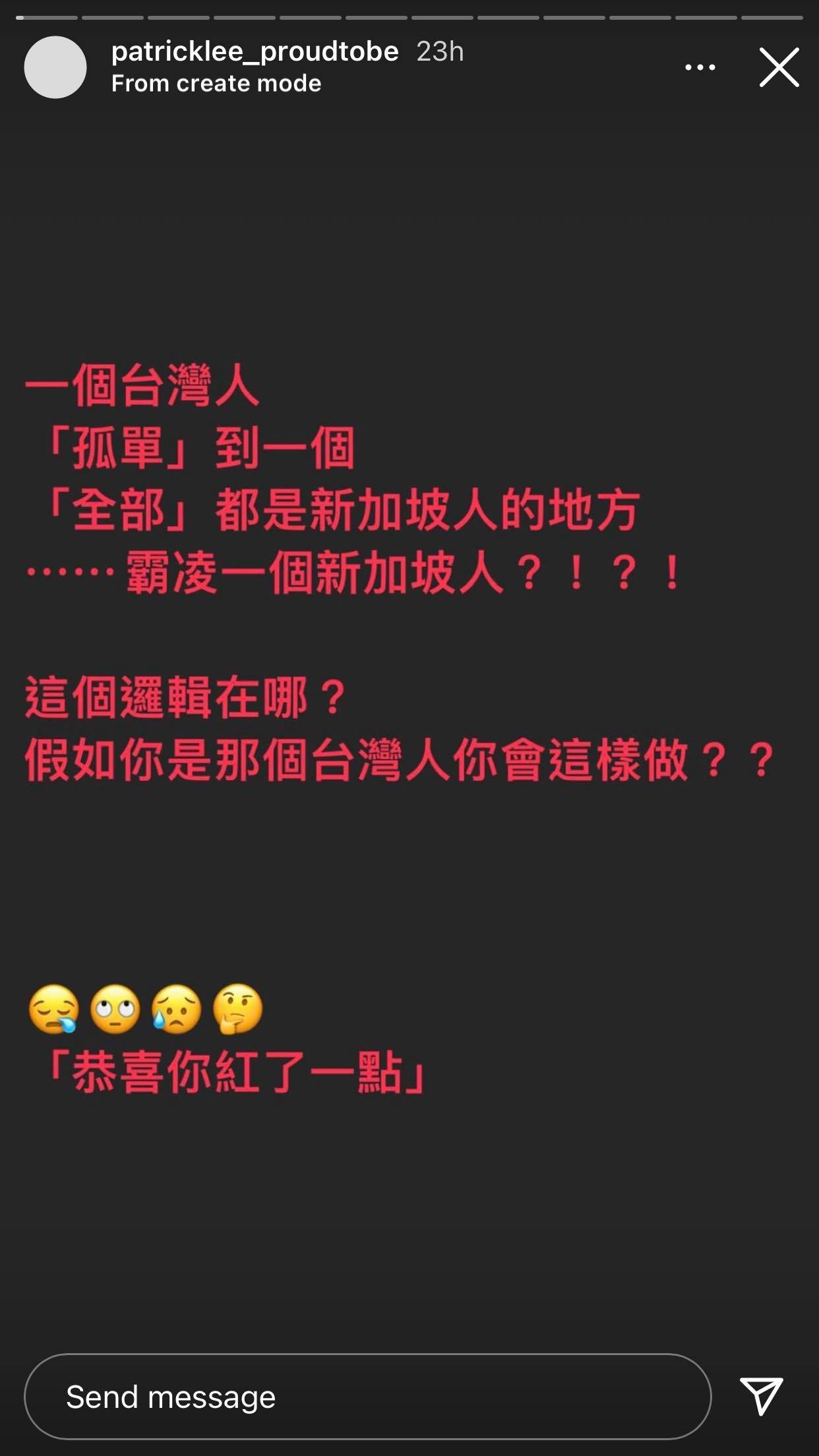 goes [alone] to a place

where it's [all] Singaporeans

Where is the logic?

If you were the Taiwanese, would you do that??

(A series of emojis meant to convey annoyance and exaggerated distress) None of the posts directly addressed each other.

Adding names to the mix

Here's where it gets slightly confusing, as more names join the fray.

At time of writing, these are the artistes who have spoken up on the subject, in chronological order:

So: How is Ng taking all this? 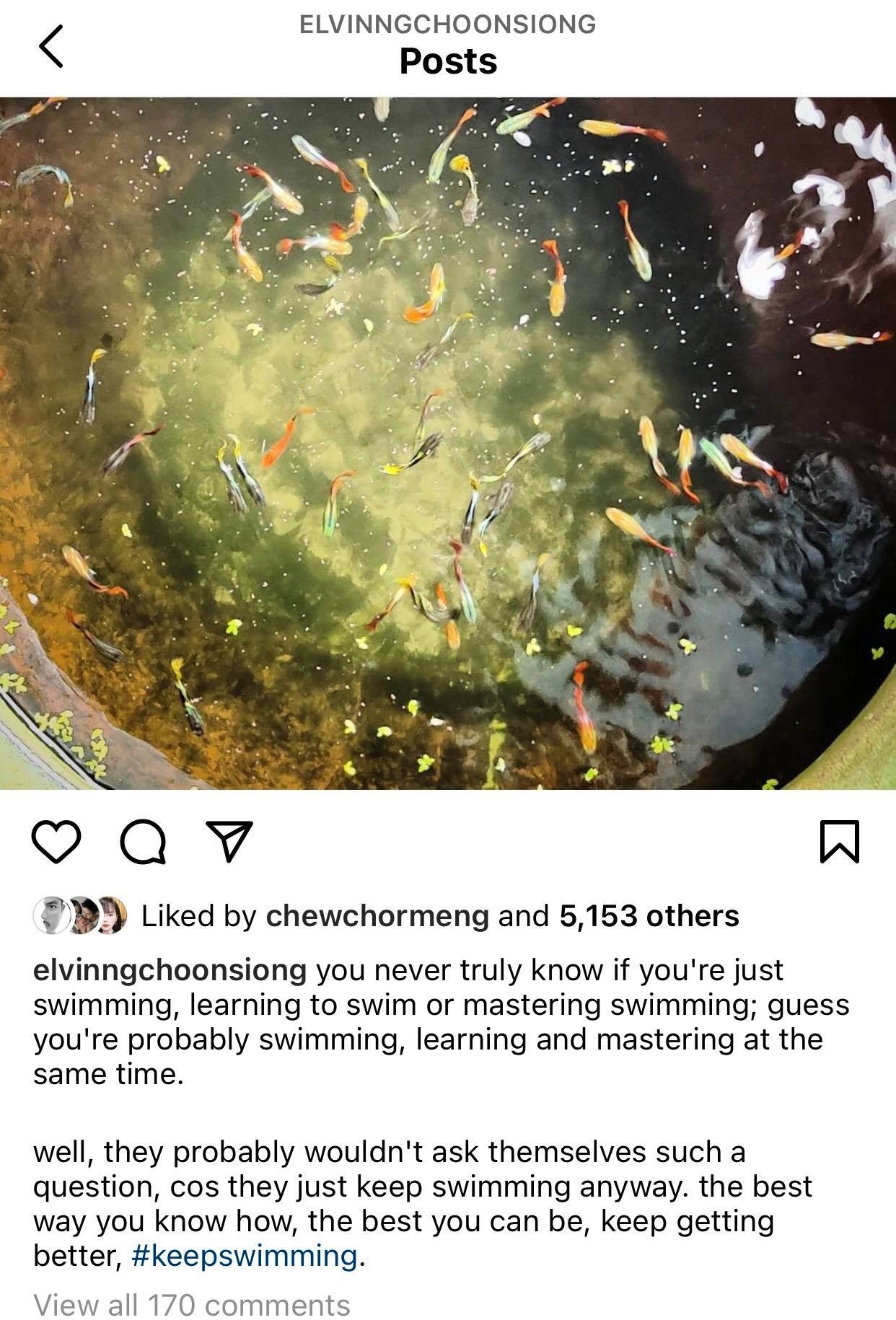 "We are in conversation with NoonTalk and is finding out more. After all, it’s been more than three years. The best way forward is for both artistes involved to have a private and constructive dialogue. Thank you."

Lee, on his end, does not appear to be letting up on the issue.

In the days after his initial post sniping at Ng, the Taiwanese actor continued his social media postings.

The posts, in order, show him: 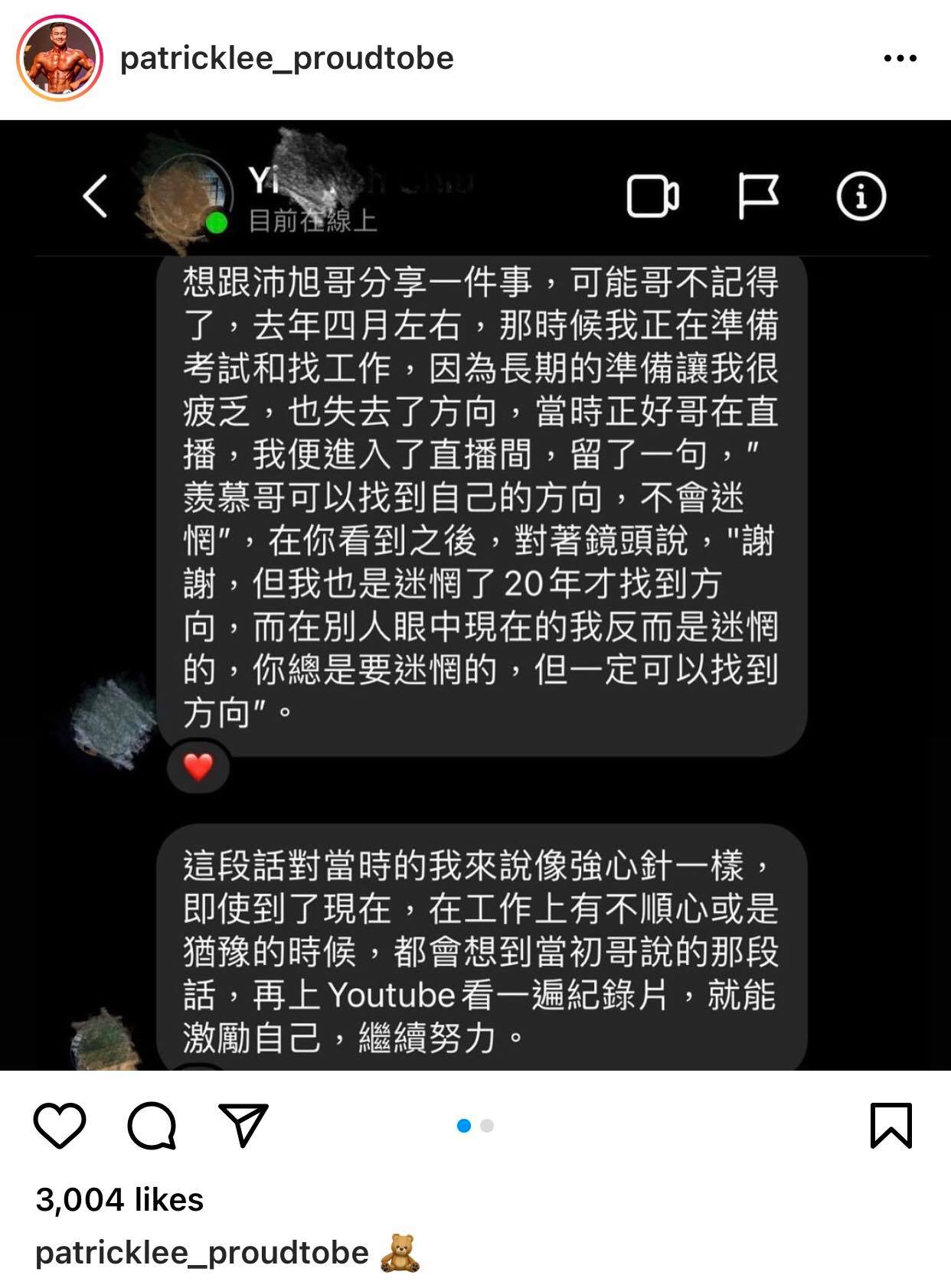 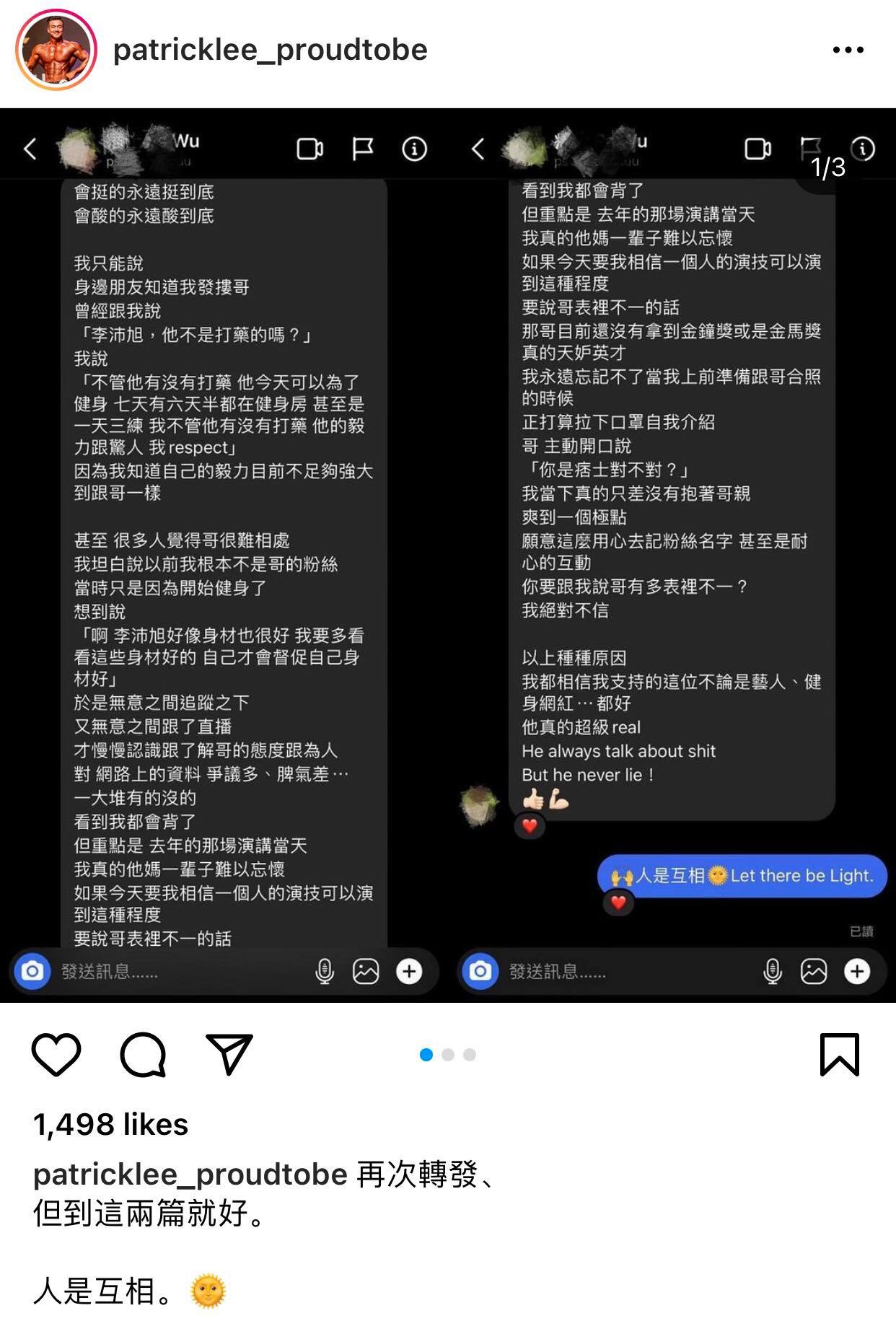 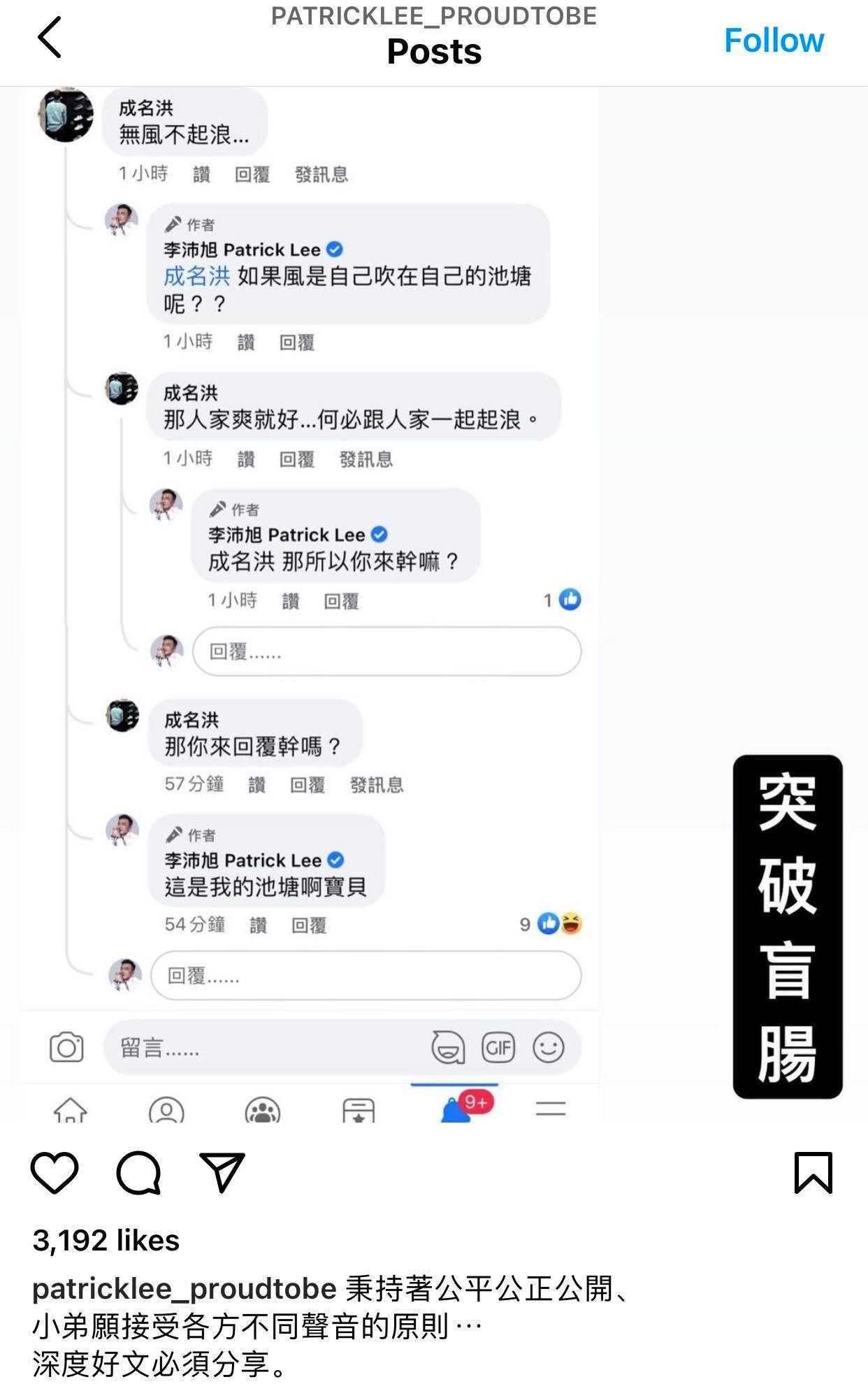 The saga has turned into a wider conversation on bullying within the entertainment industry, in part precipitated by the dogged pursuits of Singapore's Chinese media, who has been interviewing numerous artistes on the subject.