A 21-year-old Singaporean student was caught on a livestream video getting mugged in real-time in the streets of London on April 10, 2021 by a knife-carrying man.

But the crime was stopped after the livestreamer intervened and chased the attacker away -- twice in total -- before a crowd gathered, which deterred the mugger further.

The Singaporean man was identified by The Straits Times as student Raymond Hing.

The livestreamer, known only as Sherwin as he does not reveal his last name publicly, was walking around central London that night and filming his excursion.

Sherwin then heard cries for help -- a scene recorded at the six-hour mark of a seven-hour video -- and ran to the assistance of Hing, who was seated on the ground with his legs wrapped around his bicycle.

Hing had a visible cut that was bleeding and his face appeared battered.

Despite Sherwin's presence at the scene, the attacker could still be seen trying to grab Hing's bicycle as he circled back to the victim's side. The assailant then eventually fled when more bystanders showed up and put an end to any more assaults.

All this while, Hing could be heard shouting for someone to call the police while he remained on the ground.

Sherwin could be heard telling other passers-by that Hing had been kicked and beaten.

Sherwin then dialled for emergency services using his phone, a scene which was also caught on camera. Hing was seen in the video describing the attacker as being about 1.7m tall and wearing a blue jacket.

He said: "It's attempted murder, he is armed and dangerous."

Hing also told the operator on the line that "I almost got murdered", and to come to Leicester Square in London.

Hing was also heard telling passers-by to pick up his glasses, which had been knocked off.

Sherwin's video has since been watched some 156,000 times.

The Metropolitan Police said they received a call at 12.49am about "an attempted robbery in Whitcomb Street", Insider reported.

The police also said: "The victim was treated by London Ambulance Service at the scene. He declined further treatment."

The segment showing Hing getting mugged and Sherwin jumping in to fend off the victim has been shared on multiple platforms online over the past week.

Live-streamer saves an Asian man from being mugged. #StopAsianHate pic.twitter.com/wlhaliHeGR

Immediately after the incident occurred with the video showing what happened making the rounds, the identity of the Asian man was neither confirmed nor disclosed.

Some who watched the video even expressed scepticism that the scenes were real, as they appeared too detailed and reenacted, while others thought the assault was a racially-motivated hate crime.

Some online commenters were, however, quick to make the connection by claiming that Hing was previously the person who was filmed challenging Covid-19 measures in Punggol in April 2020.

"The moment was surreal," Sherwin told Insider about his decision to jump in to stop the attack.

He said: "As I was rushing over, adrenaline mixed in with my anxiety was in me, and I felt like a soldier, a defender."

He also said the experience, as it unfolded, was "like a movie scene".

Sherwin claimed he didn't think about his own safety and well-being at the time.

He remained at the scene until an ambulance and the police arrived and started taking statements from witnesses, he said. 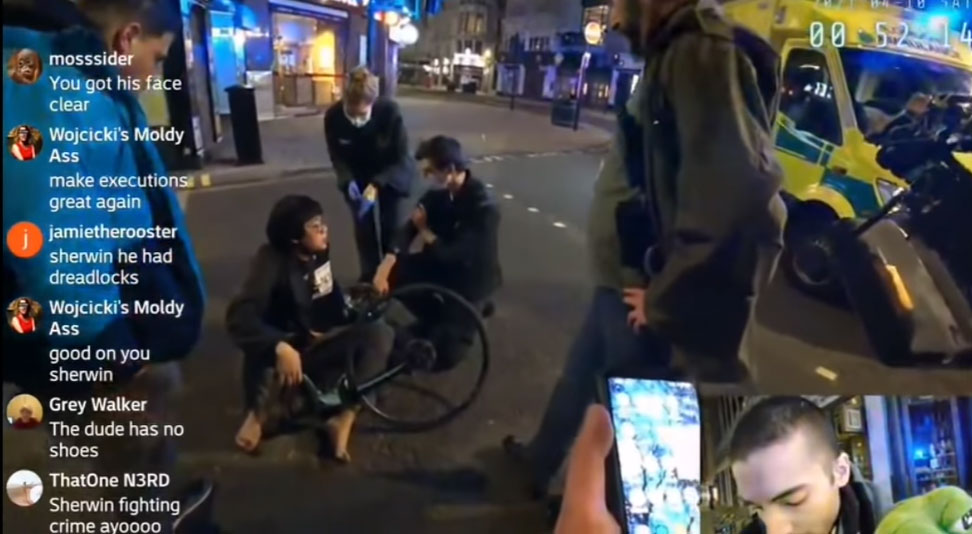 "What spurred me to help the defenseless man? I'm not sure," Sherwin said, as reported by Insider.

"My mind and thoughts were blank. I just wanted, and tried, to stop the attack."

"I truly really hope, if anything, I've maybe inspired people to not be afraid," he added.

"To try and step in, and to stop a bad-looking scenario from not turning bad to fatally worse."

Footage of the incident starts at 6-hour-and-5-minute mark.